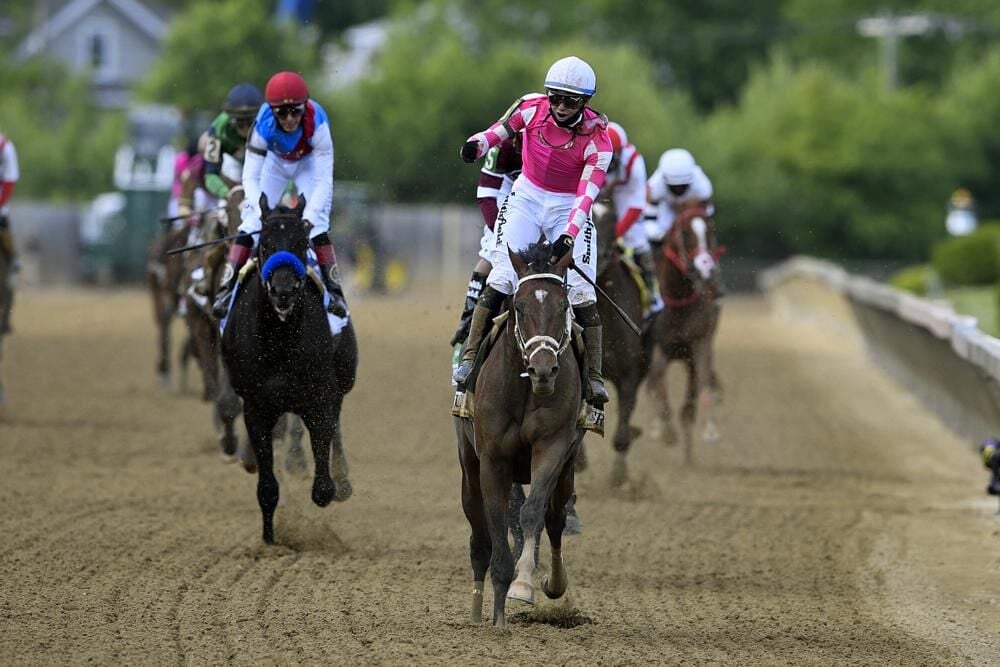 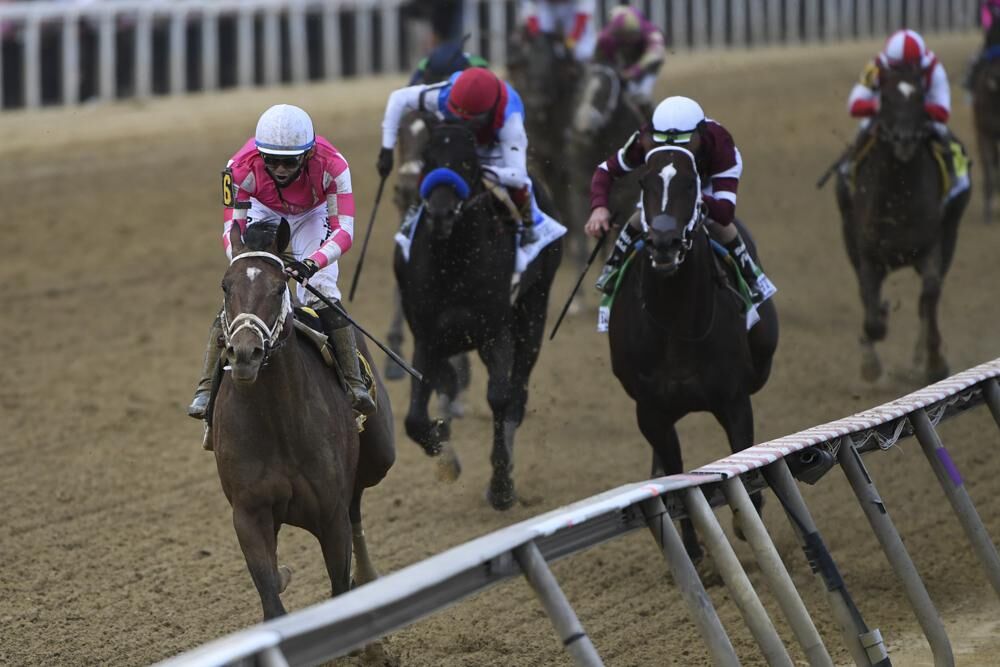 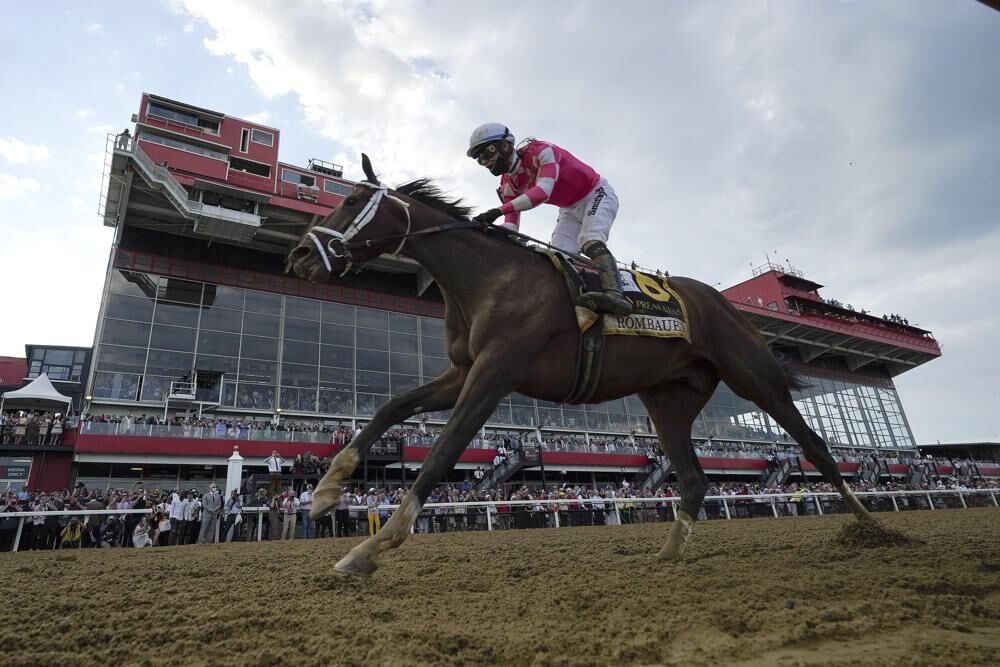 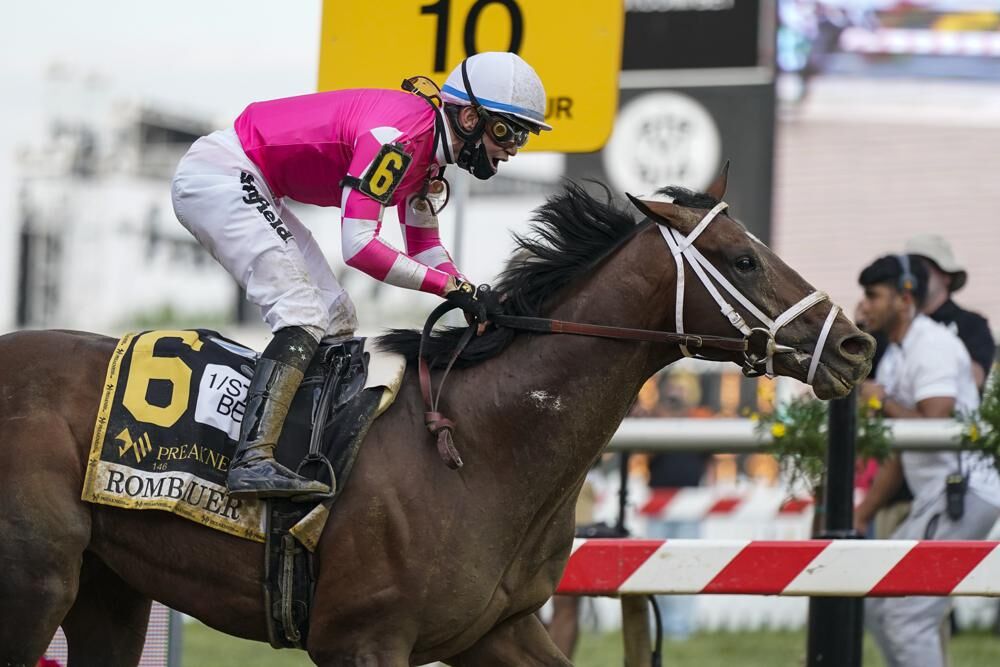 Flavien Prat atop Rombauer reacts as he crosses the finish line to win the Preakness Stakes horse race at Pimlico Race Course, Saturday, May 15, 2021, in Baltimore. (AP Photo/Julio Cortez) 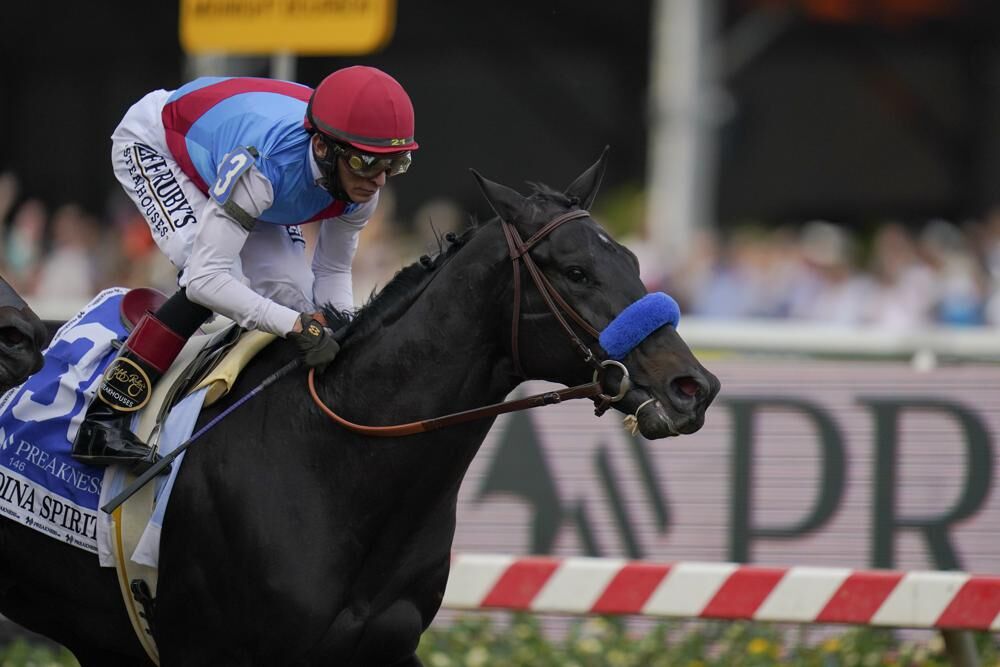 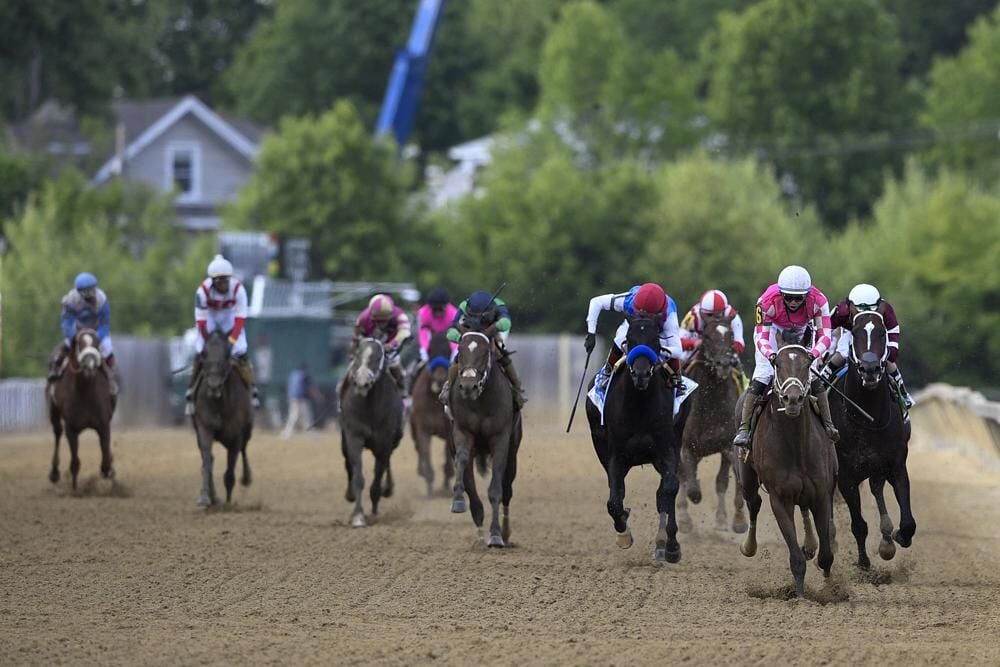 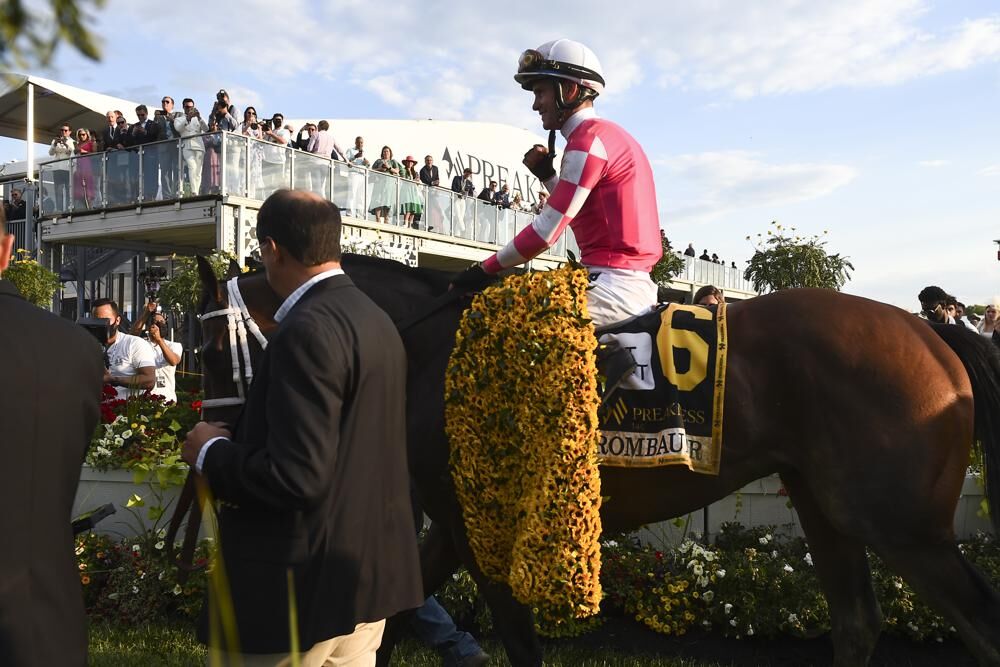 Flavien Prat atop Rombauer reacts as he crosses the finish line to win the Preakness Stakes horse race at Pimlico Race Course, Saturday, May 15, 2021, in Baltimore. (AP Photo/Julio Cortez)

LOUISVILLE, Ky. (WDRB) — Medina Spirit passed his pre-race drug test but the Kentucky Derby winner faded in the stretch and finished third in the Preakness Stakes at Pimlico Race Course in Baltimore Saturday.

The loss ended any possibility of what would have been a controversial pursuit of a Triple Crown because of the possible disqualification of Medina Spirit as the Derby winner for a medication violation.

Ahead for nearly a mile, Medina Spirit was overtaken first by Midnight Bourbon and then by the eventual winner Rombauer in the second leg of the Triple Crown.

Rombauer, ridden by Flavien Prat, did not race in the Kentucky Derby after finishing third in the Blue Grass Stakes at Keeneland. It was the third win in seven career starts for Rombauer, who raced at 11-to-1 odds.

He finished 3½ lengths ahead of Midnight Bourbon and 5½ lengths in front of Medina Spirit.

In a statement that he issued prior to the race, Baffert said, "Today is not about Bob Baffert. Instead it is about Medina Spirit and all of the other equine athletes in our tremendous sport."

Medina Spirit won the Kentucky Derby as a 12-to-1 longshot on May 1, finishing a half-length ahead of Mandaloun in the 19-horse field.

But the feel-good story took another turn last Sunday when trainer Bob Baffert said the colt’s post race drug test was positive because of the presence of betamethasone.

The drug is a corticosteroid that can be used as an anti-inflammatory when injected into the joints of a horse. Although the drug is legal in Kentucky, it cannot be in horse's system on race day.

After initially saying that Medina Spirit was not treated with metabethasone by anybody in his barn, Baffert did an about-face on Tuesday and said the colt was treated with Otomax, a medication that includes metabethasone. Baffert said Otomax was used to treat a skin rash on the horse.

Baffert was not in Baltimore Saturday to saddle his colt, leaving the responsibility to his assistant Jimmy Barnes.

On Saturday, jockey John Velasquez took Medina Spirit briskly out of the gate, just as he had at Churchill Downs. He ran first, about a half-length ahead of Midnight Bourbon for the first quarter, half and three-quarters of a mile.

Medina Spirit saved ground while racing near the rail, but the colt was overtaken by Midnight Bourbon with less than a quarter mile to run. Rombauer did not allow Midnight Bourbon to keep the lead for long. Prat surged past both horses and won easily. The winner covered the 1 3/16th miles in 1:53.62.

"Disappointing but not a surprise," NBC analyst Jerry Bailey said. "The hard race he had in Kentucky and the different complexion in this race, being pressed most of the race.

"We thought it might happen (a late fade) and it did. He just got a little weak-legged."

It was the second victory in a Triple Crown race for Prat. He was the rider on Country House in 2019 when he was moved up to Kentucky Derby winner on the disqualification of Maximum Security for interference.

Trainer Michael McCarthy said that he wanted to run Rombauer in the Kentucky Derby but that owners John and Diane Fradkin asked him to pass and wait for the Preakness. Fradkin thought the race was too tough and opted to wait two weeks.

"I was bullish on running in the Kentucky Derby but John made some valid points," McCarthy said during the post-race press conference. "I'm glad we got it done today."

The next decision on the winner of Derby 147 will be made by the stewards at Churchill Downs after the results from the second, split sample of Medina’s Spirit blood and urine is returned, likely in two to three weeks.

The third leg of the Triple Crown, the mile-and-a-half Belmont Stakes, will unfold on June 5 in New York.