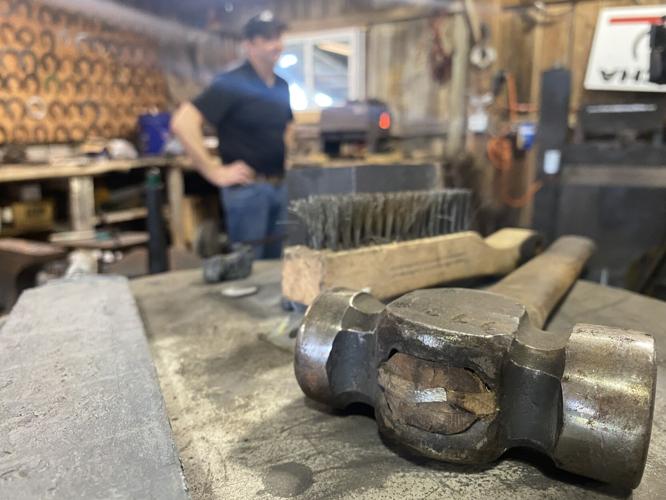 Farrier Conrad Trow stands in his blacksmith shop at his farm in Oldham County, Kentucky. 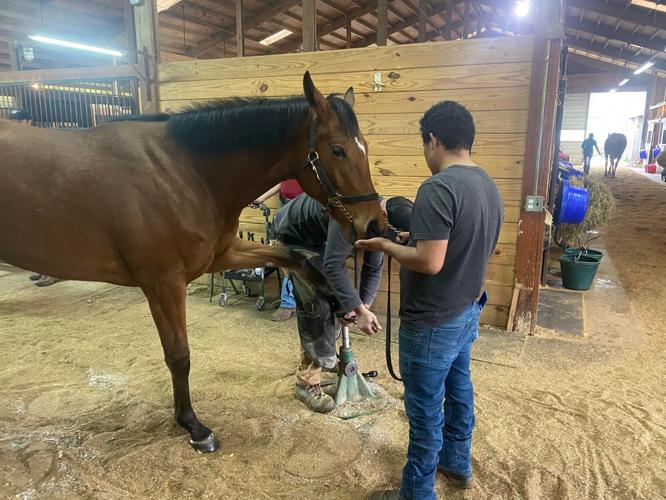 A horse in Oldham County, Ky gets its hoof trimmed and filed for a new horseshoe placement. 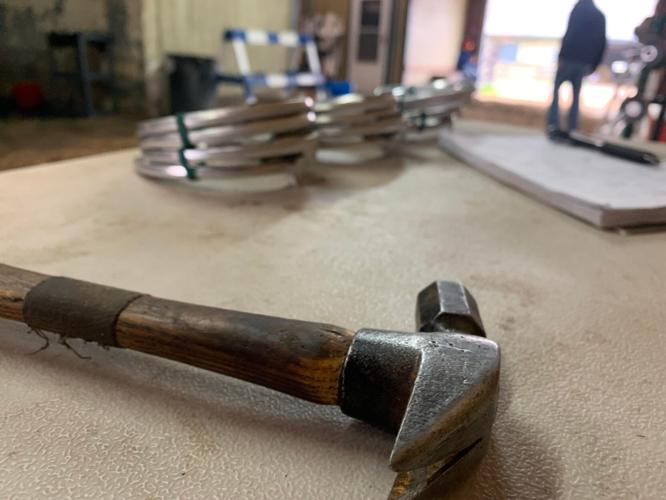 A hammer sits on the table next to a stack of new aluminum horseshoes. 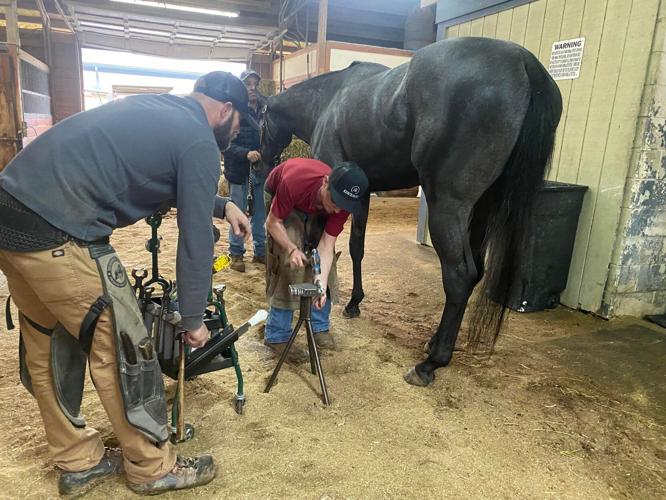 One of Conrad Trow's employees, Nate, bangs a new horseshoe to fit it to size before it's put on. 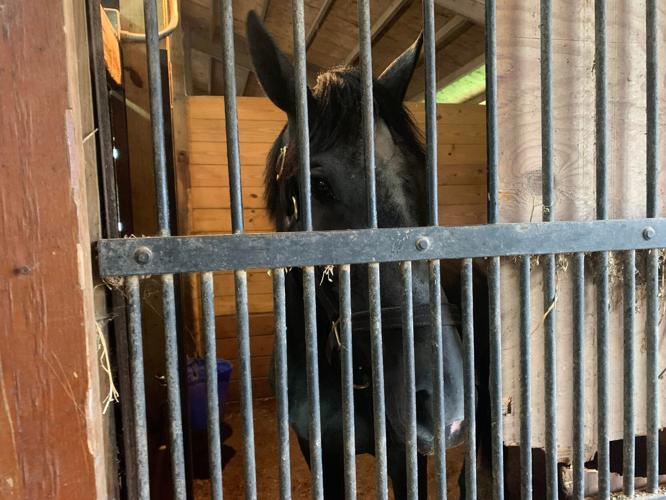 A horse waits in its stall for its horseshoe fitting. 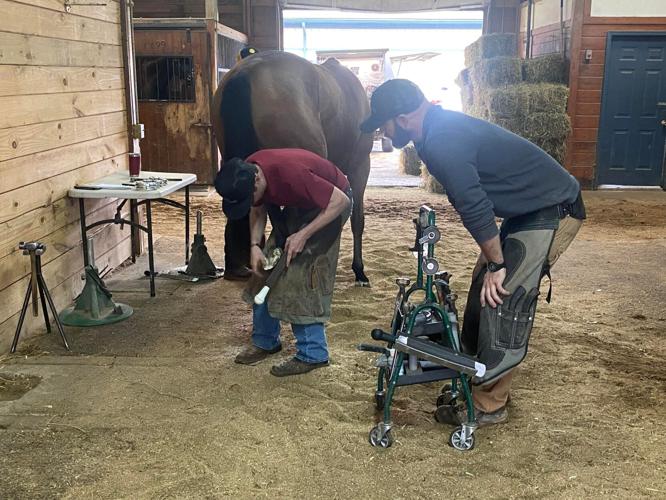 Conrad Trow's employee, Nate is filing a horse's hoof to prepare for a new horseshoe. 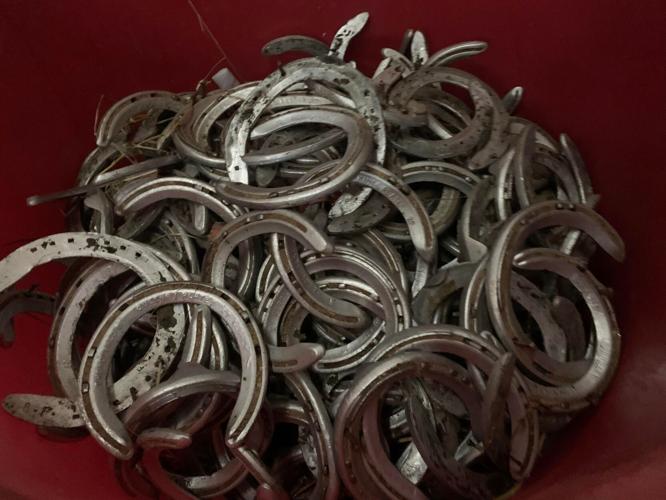 Bucket of used horseshoes removed after about a month of wear. 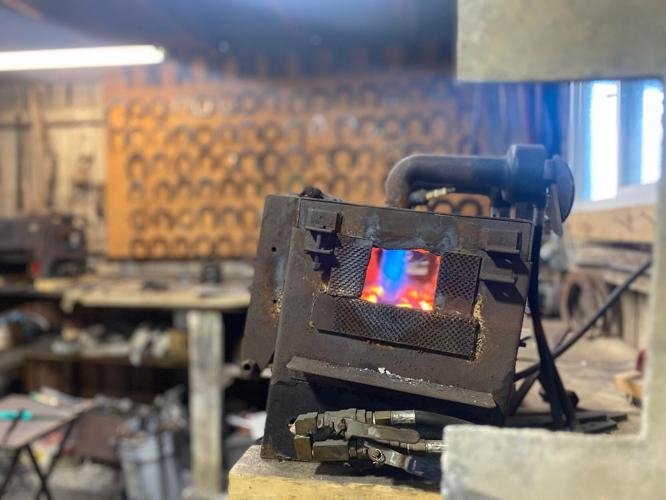 A closeup of the furnace Conrad Trow uses to forge horseshoes in Oldham County, Kentucky. 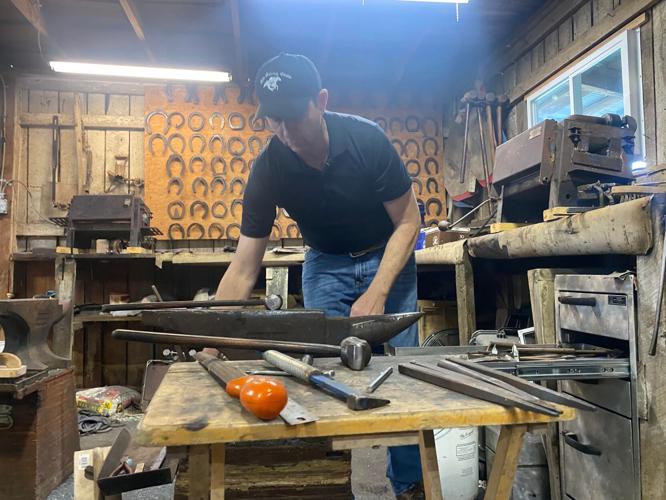 Oldham County Farrier Conrad Trow takes pride in being able to forge his own horseshoes. 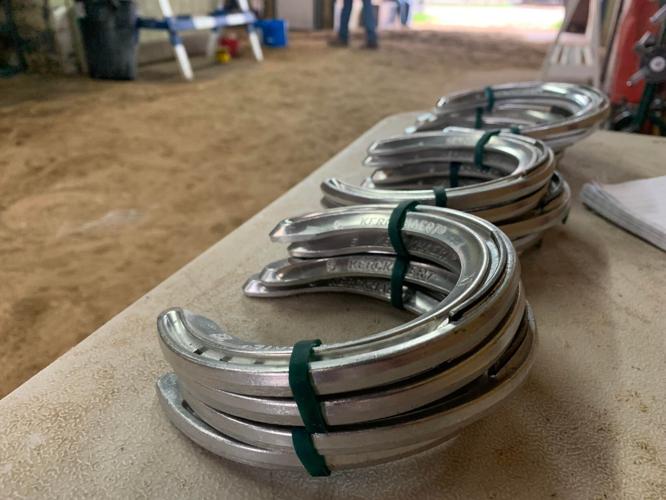 Stacks of new horseshoes wait to be fitted. 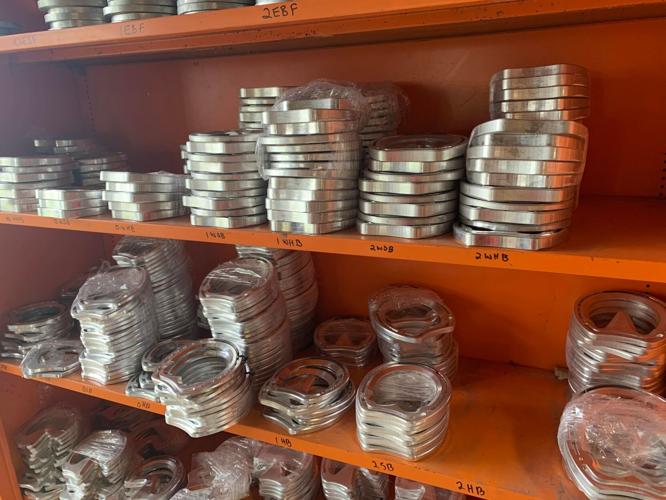 OLDHAM COUNTY, Ky. (WDRB) -- For every horse -- especially racehorses -- having a horseshoe that fits is imperative.

That’s where a farrier comes in to make sure each horseshoe gets its hoof trimmed and filed to perfectly fit a new shoe.

In Oldham County, farrier Conrad Trow works with trainer Brian Waltz, who said Trow has made a name for himself as a tried and true farrier.

"Conrad's a professional," Waltz said. "He's been doing this for a long time. He's a real craftsman. It's an easy choice for me."

Waltz said a good farrier is key to success.

Trow said, for racehorses, the shoe needs to be lightweight, which is why racehorses have aluminum, and after racing, horses switch to steel or nothing at all.

"They are thinking like track runners," Trow said. "They're trying to find the lightest pair of shoes on on their feet."

As for the making of the shoe, Trow is unique because he still blacksmiths some of his own shoes.

"I don't want to lose that bit of heritage, and it's something that teaches you how to do something and having all those tools in your chest, to be able to do it on the day if you need to," he said.

"I just took a chance on something, used it," he said. "If I was gonna have it made for me, I might as well make a few more and see if they would sell."

He has a patent pending on a new horseshoe design that helps horses with injuries feel more comfortable as they continue to heal.

"I just love being working with horses, knowing you can make a difference in a horse's life," Trow said.

He said there's never really a slow season as a farrier. Racehorses wear through shoes in about a month.

"I wouldn't trade it for anything," Trow said. "It's physically demanding on your body, but I love it."

He travels to each barn to see his clients, holding each horse's leg as he peels the old shoe off and gives the hoof a pedicure, all while hunched and vulnerable holding the horse's leg against your own.

"It is extremely dangerous," Trow said. "You're underneath a live animal. ... Most of the time, the horses do really well. But every now and then, you have horses that just explode or blow up or get scared."

Trow is leaning on his apprentice and other local farriers this month while he recovers from a hip replacement after a horse got spooked and tore his hip out of socket.

"When I got hurt, they've taken over and kept my work going and kept my business going," he said.

He added that it's that type of close-knit industry where local farriers help out in these kinds of scenarios.

And it's not the only adjustment he's had to make this year. Market prices for steel and fuel for his truck forced him to raise his price after holding out through 2020 and 2021.

"People don't like it when you go up on your prices," Trow said. "I hate to say it, but that's just what we have to do. We can't eat the cost all day," he said.

Trow it's not him getting rich though, typically farriers only see a fifteen to twenty percent profit margin.

"At the end of the day, when you come home, it's not as much as you'd want," Trow said.

Even through the heat of the summer and ice of the winter, Trow said he couldn't see himself doing anything else.

"I don't think I'll ever retire from shoeing horses," he said. "I think I'll always shoe horses until I just physically can'. It's just, I just love it. It's just something about it that it's a drug."