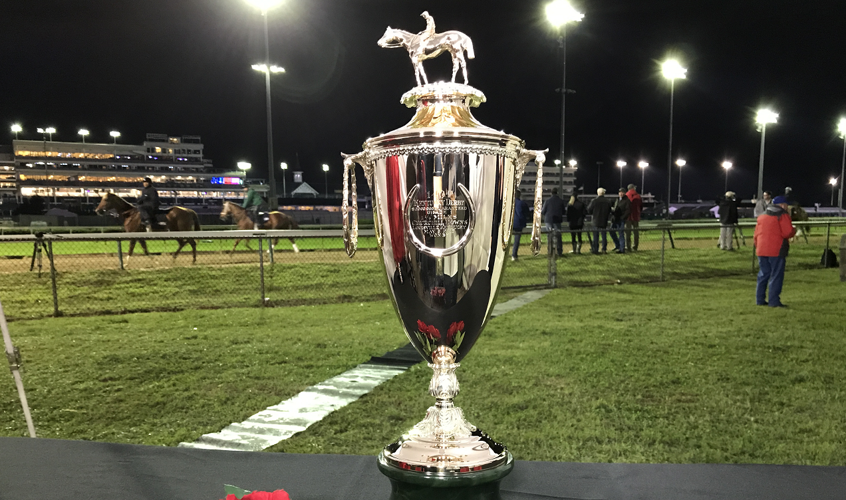 This photo dated May 4, 2017, shows the 14-karat solid gold Derby trophy that will be presented to the owner of the horse that crosses the finish line first on the first Saturday in May at Churchill Downs in Louisville, Ky. (WDRB photo) 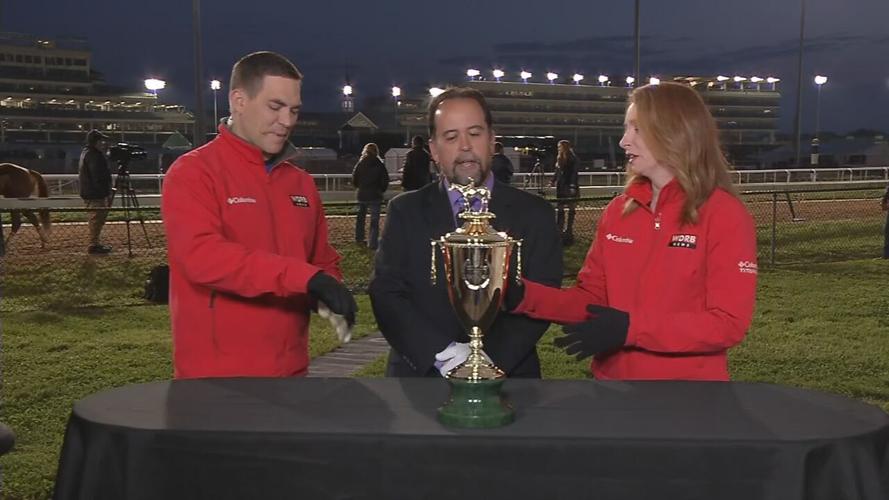 Pictured: the 14-karat solid gold Derby trophy that will be presented to the owner of the horse that crosses the finish line first on the first Saturday in May at Churchill Downs in Louisville, Ky. (WDRB photo) 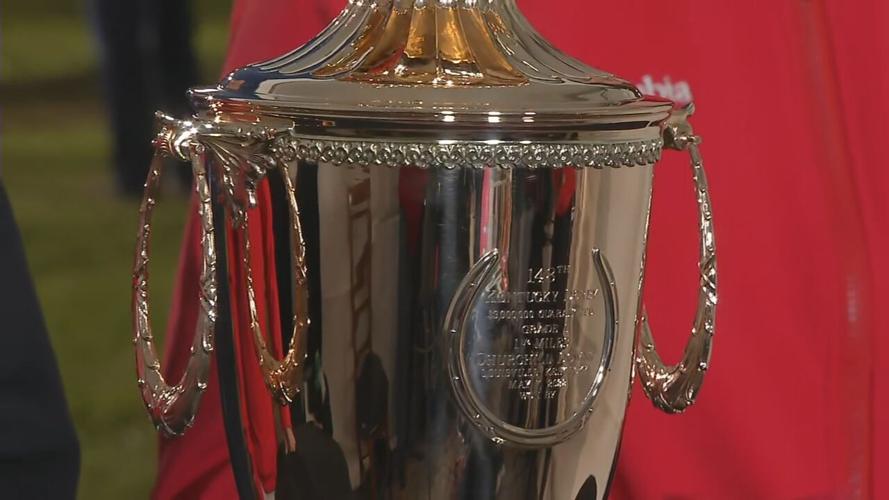 Pictured: the solid 14-karat gold Derby trophy that will be presented to the owner of the horse that crosses the finish line first on the first Saturday in May at Churchill Downs in Louisville, Ky. (WDRB photo)

The Kentucky Derby Museum takes care of the 22-inch tall trophy with a jade base until it's presented to the owner of the 3-year-old Thoroughbred that wins the race.

Chris Goodlett, director of curatorial and educational events at the Kentucky Derby Museum, shared some of its history.

"This trophy is one of the greatest traditions of the Kentucky Derby," he said. "We have had a trophy of this design ever since 1924 when Matt Winn first commissioned Louisville jeweler Lemon and Sons to design this trophy."

Goodlett said the design has remained essentially unchanged "with the exception of the horseshoe on the front. Until 1999 it was tines down. Now, it's tines up. Horsemen's lore says horseshoe tines down makes the luck run out."

Derby horse trainer Dale Romans once jokingly told WDRB News anchor Sterling Riggs that he would like to drink beer from it.

"He said, 'I'd take this trophy down to Fourth Street Live! I'd put beer in it and I'd drink beer out of it,'" Riggs recalled when interviewing Goodlett on the backside. "Is that thing hollow, can you really put beer in it?"

"You could," Goodlett said. "It's in three pieces. You can take that lid off. And then you have the cup, and the cup comes off the solid jade base."

The trophy is presented to the owner of the winning horse in the Winner's Circle after the race, and the jockey, trainer and breeder receive sterling silver replicas. The replicas will be formally presented to those individuals or groups during the spring meet.

"This is the only solid gold sporting trophy that we know of for a sporting event in the United States," Goodlett said.

Goodlett is the only person allowed to touch or handle the trophy until it is presented to the Derby winner.

More about the Trophy

The hand-crafted trophy takes five months to make by Richline Group|LeachGarner, which also makes the replica trophies created for the Kentucky Derby-winning trainer, jockey and breeder. It's topped by a 14-karat gold horse and rider and features a pair of horseshoe-shaped wreath handles. The front of the trophy displays an 18-karat gold horseshoe that.

Replicas of the gold trophy are on display at the Kentucky Derby Museum. "We have about six or seven in our collection," Goodlett said. "Previous winners have donated items."

To find out more about the Kentucky Derby Museum, visit www.derbymuseum.org.