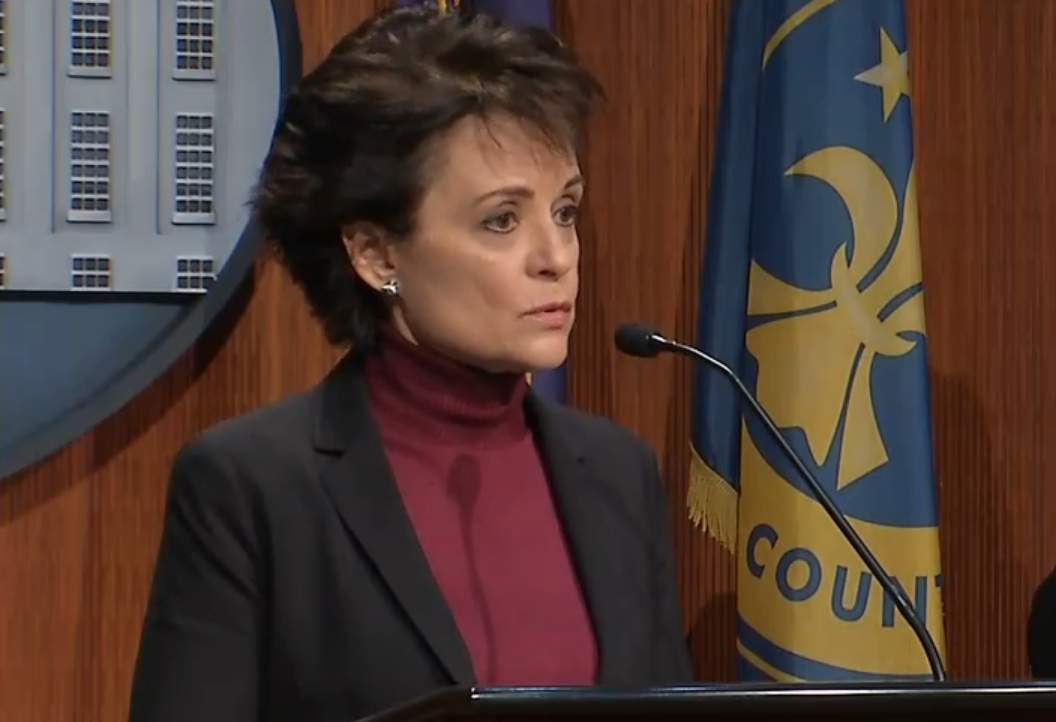 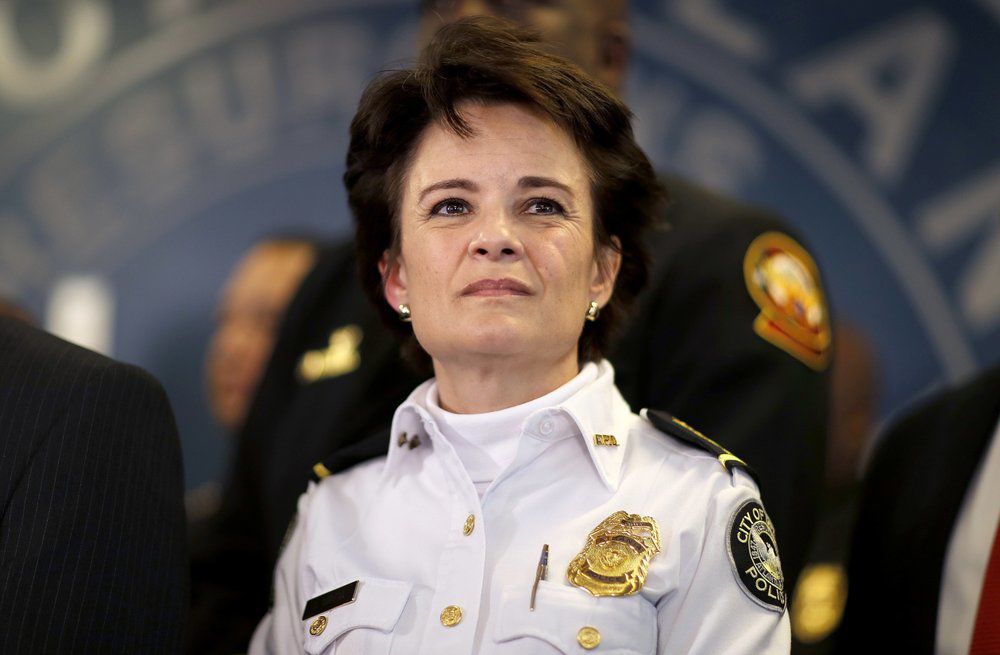 LOUISVILLE, Ky. (WDRB) -- Erika Shields, who rose from a beat officer to police chief during a 25-year career with Atlanta's police department, has been named the next chief of the Louisville Metro Police Department.

She will be the first woman to permanently lead the Louisville agency when she starts January 19, earning an annual salary of $210,000, according to Mayor Greg Fischer's office.

Fischer announced he was hiring Shields on Wednesday, capping a six-month process that began when Fischer fired former Chief Steve Conrad in June. In all, 28 people applied for the job, the mayor's office said.

"This has been a difficult year for all of us, but I am energized about the opportunity to work with you as we move toward our shared goal of LMPD being the best in the country," Shields wrote in an email to the department obtained by WDRB News.

She will take over a Louisville department under scrutiny for its handling of the early-morning raid on Breonna Taylor's apartment last March; three officers were fired and one indicted for their roles in that case. Taylor, a 26-year-old Black woman, died inside her home after she was shot by police serving a search warrant as part of a narcotics investigation.

And Shields comes to her new job after resigning from the Atlanta post last June after the fatal shooting of Rayshard Brooks, a Black man whom police shot and killed during a struggle in a Wendy's parking lot.

Shields said at an introductory press conference at Metro Hall that the Brooks killing was not the "singular reason" that she stepped down, but it was the culmination of other issues. She did not elaborate.

"What I realized is as long as I stayed I was going to be a distraction, and the city needed to move forward and it just ... it would have been self-serving to stay at that point given everything," she said.

In Louisville, the hire was met with skepticism from some social justice activists, protesters and citizens concerned about Shields' leadership during Brooks' death. Israel McCullough, who has taken part in demonstrations over Taylor's death since last May, said he was "shocked" and "disappointed" to learn that Shields was Atlanta's chief at that time.

McCullough said he will give the new chief a chance, although "she's got to show us she's changed since then."

"This is not a good start, but we all are going to work hard," Reynolds said. "It doesn't matter what we think, she's been hired."

Shields will become the city's fourth police chief in less than a year, heading the department in the final years of Fischer's third and final term as mayor. Fischer called her a "change agent during her long and distinguished career" and someone who has proven "she can listen and she can lead."

A search committee that included Metro Council members, Fischer administration officials and others recommended Shields unanimously. There were 11 current or former chiefs who applied.

"Please give Chief Shields an opportunity to earn your trust," said Jessica Green, chair (D) of the Metro Council's public safety committee. "She is interested in 21st century policing. I know that she will be available to have conversations with community members that have questions or concerns."

In response to reporters' questions, Shields sought to contrast the shootings of Brooks and Taylor by noting that Taylor was at home and "in bed and the police came into her apartment and she ends up dead." (Taylor was in bed watching a movie when she and Kenneth Walker, her boyfriend, heard banging at the door, Walker has said.)

"This is where it's race reckoning," Shields said. "This doesn't happen to white people. It just doesn't."

In a statement, the River City Fraternal Order of Police called on Shields and Fischer to "immediately dispel the false narratives" about the Taylor shooting and the differences in white and Black communities.

"We had hoped to work with the new chief in an effort to make this department successful in recruiting and retaining the best officers our region has to offer," the FOP said. "Unfortunately some of the comments made today have already caused many members to lose faith in her ability to improve the department."

The police union, however, said it still is willing to work with Shields to  create a "strong and trusting relationship" with the department's rank and file officers.

Conrad was fired after Fischer learned that officers failed to turn on their body-worn cameras during the fatal shooting of business owner David McAtee during a joint National Guard and LMPD response to protests over Taylor's death. Conrad had already announced his retirement.

Interim Chief Robert Schroeder served from June until his retirement in September, when the department's current acting chief, Yvette Gentry, succeeded him.

In the wake of Conrad's firing, Fischer announced a full review of the police department. The mayor told the Louisville Forum in mid-December that the findings of consulting firm Hillard Heintze were expected around the same time he named a new chief.

"The new chief will review those recommendations and make changes," he said.

The Fischer administration did not disclose the finalists.

Shields was the second woman to lead the Atlanta Police Department, rising from a patrol officer to deputy chief before she was named chief in 2016. She resigned in June 2020 after the fatal police shooting of Brooks.

Police body camera video shows two Atlanta officers having a calm and respectful conversation with Brooks for more than 40 minutes after responding to complaints that Brooks had fallen asleep in his car in a Wendy's drive-thru lane on June 12.

When the officers tried to handcuff Brooks, he resisted in a struggle caught on dash camera video. Brooks grabbed a Taser from one of the officers and fired it at Officer Garrett Rolfe as he ran away. Rolfe fired his gun and an autopsy found Brooks was shot twice in the back.

The Fulton County district attorney filed charges including felony murder against Rolfe, and charged Brosnan with aggravated assault and violating his oath. Their lawyers have said their actions were justified.

Shields resigned within 24 hours. In a statement at the time, she said that she "offered to step aside" as chief and that "it is time for the city to move forward and build trust between law enforcement and the communities they serve."

During her career in Atlanta, Shields worked in a plain clothes role that included search warrants and narcotics work, according to her official department biography. She also handled internal investigations and reviewed officers' disciplinary files and presented them to the police chief.

As deputy chief, Shields oversaw the department's Strategy and Special Projects Division. During her time there she helped advance the Video Integration Center, a network of public and private surveillance cameras, and "researched and identified technological measures to support the crime analysis process," her bio says.

In her first year as chief, murders fell by 29 percent, robberies dropped 32 percent and burglaries had a 23 percent decrease, according to the police department's annual report. Police attributed those declines, in part, to a federal partnership known as Safer Neighborhoods through Precision Policing.

Atlanta officers began wearing body cameras in late 2016, around the time that Shields became chief. But by 2018 a city audit found that officers routinely failed to turn them on, or turned them off during incidents, the Atlanta Journal-Constitution reported.

Auditors also revealed that officers deleted videos when they weren't supposed to and improperly labeled some videos. Overall, the audit found that police officers were using cameras in a way that risked sowing distrust with the public.

Shields said she requested the audit, then created a special unit to audit supervisors to ensure they were properly following body camera rules. The unit also doled out consistent discipline for violations, she said.

"I had to get the attention of people," she said. "It's imperative that they understand the significance of the camera being on."