LOUISVILLE, Ky. (WDRB) – In a case with implications for local governments across Indiana, the state’s Public Access Counselor has ruled that recording devices can be placed on or near tables where elected officials conduct business.

The council’s attorney, Kristi Fox, argued the board wasn’t bound by the Indiana Open Door Law to allow a recording device within ten feet of the council. The law gives the public the right to "observe and record" public meetings.

Among a set of arguments that included attorney-client privilege, Fox claimed that a recorder on the council members’ table amounted to an "encroachment on their space."

Britt, whose office evaluates public records and meetings disputes, disagreed with those claims.

He wrote in his advisory opinion that an “unobtrusive microphone can be placed near, or even on, a council table during a public meeting because it constitutes the reasonable use of a recognized means of recording.”

The “overwhelming majority” of governing bodies let microphones be placed close to board members during public meetings, Britt wrote. The device WDRB sought to put on the town council’s table in September – a small, clip-on lavalier microphone – is “usually anything but obtrusive,” he added.

He also addressed Georgetown’s argument that a recording device may encroach on some elected officials’ meeting space.

“To the extent it interferes with a board member’s ‘personal space’ while conducting public business, perhaps a small podium or table could be placed in front of the dais to alleviate such violence visited upon the public official’s sensitivities,” Britt wrote.

The opinion is advisory and doesn’t carry the weight of law. It’s meant to help interpret Indiana’s public access laws. 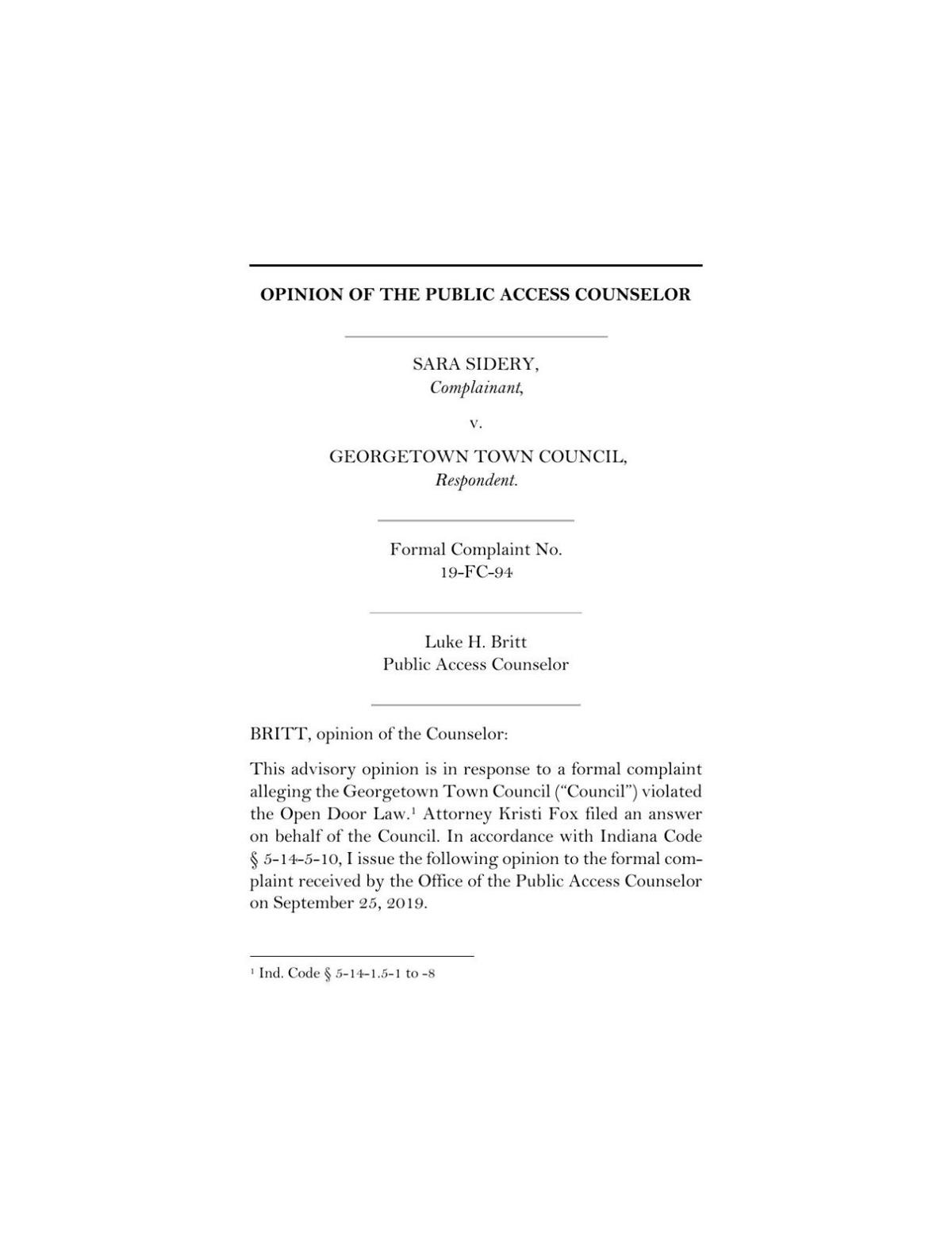 Louisville-based attorney Michael Abate, a First Amendment attorney who represents WDRB and other media outlets, said the opinion reiterates the importance of news organizations to clearly record the actions of public officials.

“I think it’s a very important clarification and a real victory for common sense,” he said.

The opinion is a "reference point" for citizens, journalists, educators, and others across Indiana that makes explicit "what some of us took for granted when recording public meetings," said Zachary Baiel, president of the Indiana Coalition for Open Government. Baiel recently ran for mayor of West Lafayette, Ind., as an independent.

"It's simply good governance to allow the public to observe and record public meetings, including the ability to place, in an unobtrusive way, recording devices in the heart of the action," Baiel, who recently ran for mayor of West Lafayette, Ind., as an independent, said in an email.

Georgetown, a town of about 3,300 in Floyd County, Ind., has faced questions from some residents in recent months about the future of its police department. Addressing rumors about the agency, the council issued a statement Sept. 16 saying it had no plans “at this time” to close the department or have the Floyd County Sheriff Frank Loop’s office take over.

But WDRB obtained emails under Indiana’s public records law that same month showing that the council was in talks this year to have the sheriff’s office provide police services.

Pullen, the council president who initially told WDRB it couldn't place its microphone on the meeting table, lost his reelection bid this month.