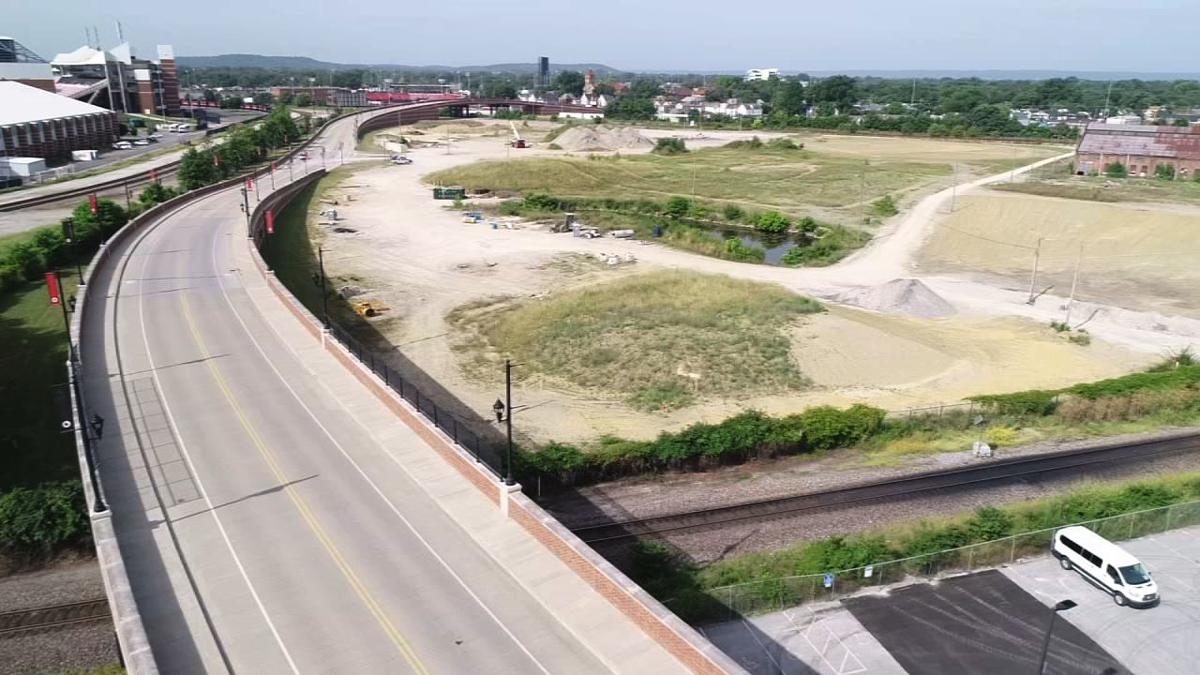 The University of Louisville once planned an elaborate engineering research park on the former Kentucky Trailer site adjacent to its Belknap campus. Today, the site remains vacant except for a $20 million access road built through it in 2015. An artist's rendering of the University of Louisville's once-planned Institute for Product Realization, an engineering research park that would be located behind the Speed School of Engineering. In the years after James Ramsey 2016 ouster as U of L's president, the plan has fizzled. 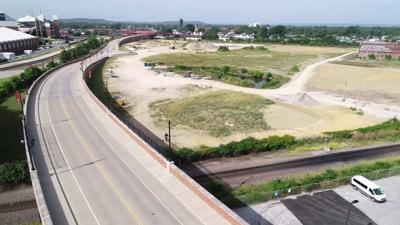 Kentucky Trailer, a manufacturer of semi-trailers, was looking to leave its 30-acre plant sandwiched between U of L’s Speed School of Engineering and Cardinal Stadium. U of L’s nonprofit foundation, of which Ramsey was also president, shelled out $19.5 million for the property.

In the years leading up to Ramsey’s abrupt resignation in 2016, U of L began laying the groundwork for the Kentucky Trailer site’s future: it would be transformed into an engineering and manufacturing research park called the Institute for Product Realization.

The idea was for scientists, private businesses and students to collaborate on new products – something akin to GE Appliances’ FirstBuild micro-factory, but on a much bigger scale.

U of L then paved the way – literally – by securing $20 million in state highway funds to build a road extending Brook Street through the property, complete with two expensive bridges over railroad tracks, in 2015.

For now, it’s a road to nowhere. The site remains a plot of empty dirt.

Plans for the research park long ago fizzled amid a changing of the guard at the university.

Ramsey was forced out in 2016 after a furor over millions of dollars in extra compensation the foundation paid him and other top administrators. Neville Pinto, U of L’s former engineering dean and interim president, who spearheaded the research park plans, left to become president of the University of Cincinnati.

Now, the botched engineering park is one of the many claims U of L and its foundation are prosecuting against Ramsey and a handful of his former aides in a massive lawsuit filed in April 2018.

U of L claims the Ramsey administration “depleted” the school’s endowment by using the donor-generated fund for “speculative ventures” like the engineering park and to award themselves millions of dollars in “excessive” compensation through the foundation. Estimates of the alleged damages range from $80 million to $120 million.

Attorneys for Ramsey and the other defendants say the claims amount to a second-guessing of decisions which the university and foundation have admitted were approved by their respective boards at the time. With only two exceptions, the university did not name former board members as defendants in the lawsuit.

In a sense, the failed engineering park is emblematic of the larger debate over Ramsey’s 14-year tenure at U of L. Did he jeopardize the university’s finances with freewheeling spending, as the current regime contends?

Or, did Ramsey’s abrupt ouster in 2016 set U of L back, slowing the physical transformation of the campus and curtailing the flow donor dollars?

In the lawsuit, which has moved slowly in Jefferson Circuit Court, U of L and the foundation call the Kentucky Trailer site an “egregious” example of real estate for which the foundation overpaid, using endowment dollars that were restricted for other purposes.

Keith Sherman, who was installed as the foundation’s executive director after Ramsey’s departure, said in a February 2019 deposition that the engineering park was “a half-baked plan at best,” and now the foundation is stuck paying off the mortgage on the property with no income to speak of.

“There’s nothing going on, on that property. It’s a $19.5 million albatross on the foundation right now,” Sherman said in the sworn testimony.

Sherman said the engineering park is one of many ways the Ramsey regime recklessly dipped into the school’s endowment – a fund of about $700 million that is supposed to be conservatively managed for long-term growth.

“I think (what) we’re dealing with is a lack of money. There’s no cash,” he said in the deposition. “We’ve been leveraged to the hilt -- no way to pay for everything that they’d like to do.”

J. David Grissom, who chaired U of L’s board of trustees in the aftermath of Ramsey’s tenure, likened the Ramsey regime’s spending to “eating your seed corn,” according to a transcript of a deposition he gave last month.

Lawyers for Ramsey-era administrators, however, say the fizzling of the research park illustrates how the university’s progress ground to a halt when Ramsey’s regime was thrown out.

“All of the people who were moving forward with improving the infrastructure at U of L were let go in 2016, and now we have exhausted the pipeline,” said Ann Oldfather, the attorney representing former Ramsey chief of staff Kathleen Smith. “…There has been no visionary at the university since Ramsey left, and Kathleen was the one who got things done.”

U of L President Neeli Bendapudi, who was hired in April 2018, has yet to lay out a plan for the land behind the Speed School.

“As part of the strategic planning process, we continue to study the highest and best use of this valuable property,” said John Karman, a spokesman for Bendapudi. The conceptual Institute for Product Realization “will not be developed as originally planned,” he said.

Steve Pence, Ramsey’s attorney, told WDRB News in an interview that Ramsey’s plan for the engineering park was part of Ramsey’s overall strategy to reach the Kentucky General Assembly’s mandate for U of L to become “a premier, nationally recognized metropolitan research university” by 2020.

Pence stressed that Grissom, who will leave the U of L board on Dec. 1, admitted in last month’s deposition to not knowing about the legislature’s stated goal for the university.

Grissom called the notion that U of L could become a “premier, nationally recognized” university by 2020 “unrealistic totally.”

“That’s somebody smoking something funny,” he said.

Grissom also took a shot at the legislature for setting the aspirational goal for U of L, saying, “The majority of the people … who drafted this legislation probably are not college graduates.”

Ramsey took the legislature’s goal seriously, Pence said. Referring to U of L’s current leaders, Pence said: “If they can do a better job, let’s see them do it.”

U of L’s lawsuit against Ramsey likely won’t be resolved soon.

The university has asked for a trial in the fall of 2020. Ramsey and the other defendants have yet to give depositions.

Lawyers for the defendants will likely ask Jefferson Circuit Court Judge Judith McDonald-Burkman to dismiss the case before trial.

So far the university and foundation have collectively spent more than $3 million pursuing what they call financial fraud during Ramsey’s tenure – including more than $2 million on the forensic accounting report that forms the basis of the claims and at least $1.2 million on the outside lawyers handling the case.

The foundation separately reached a $300,000 settlement with BKD, the accounting firm that audited the foundation’s books under Ramsey.