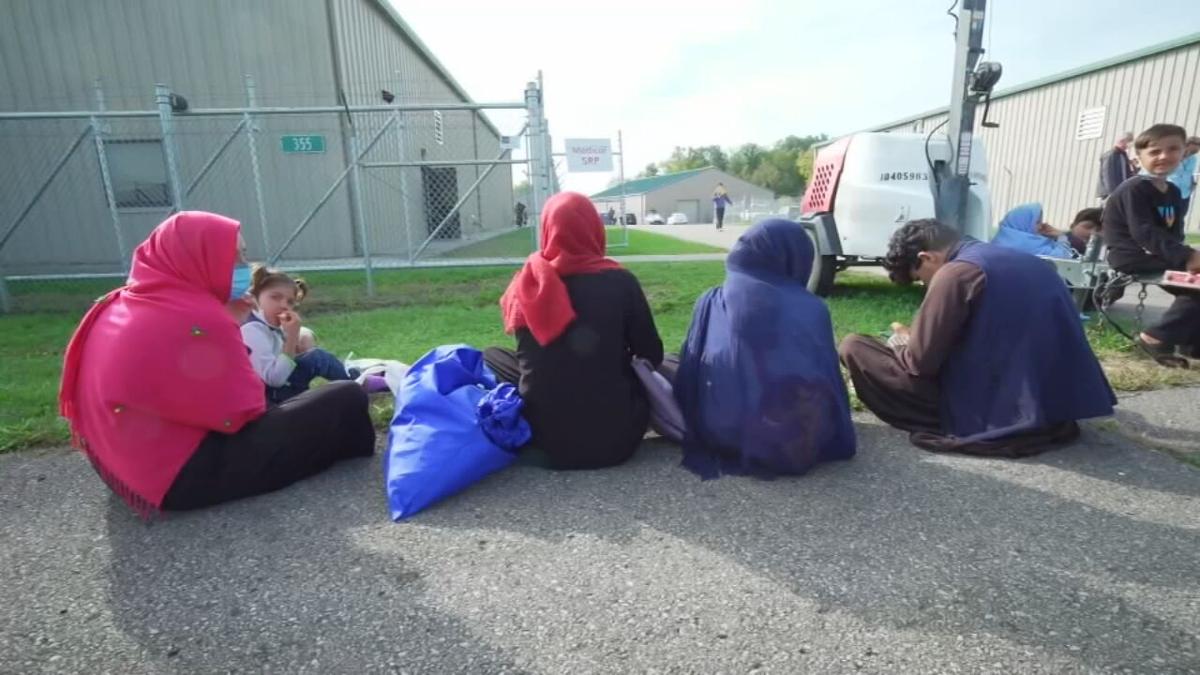 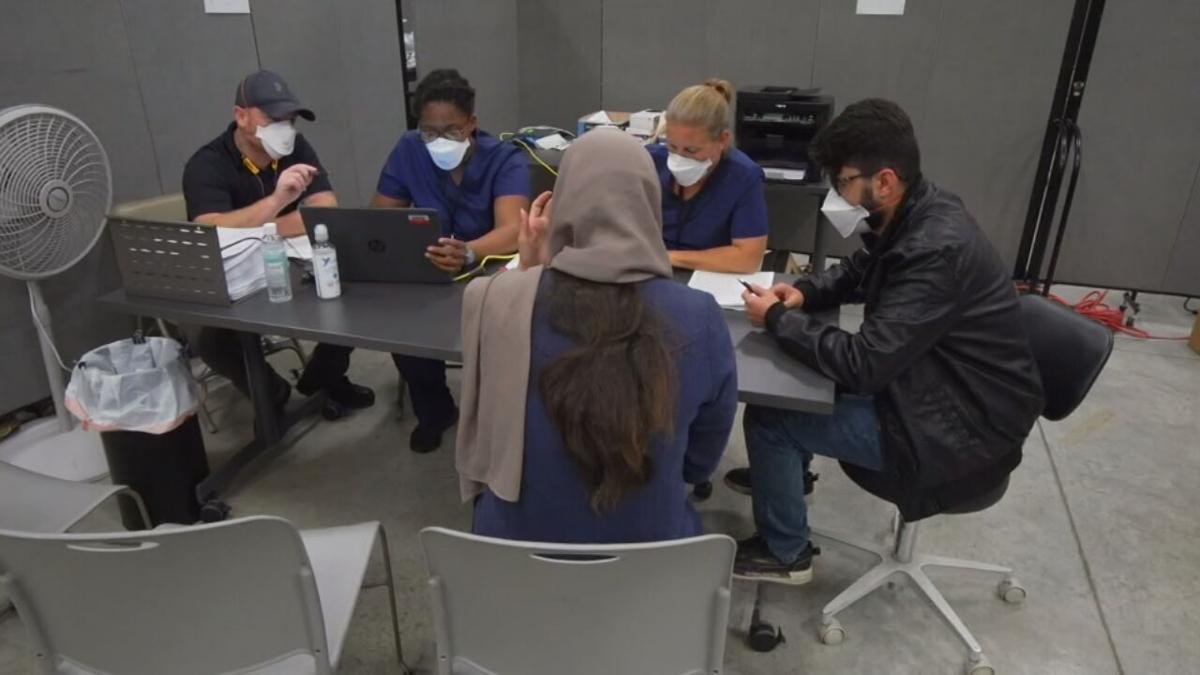 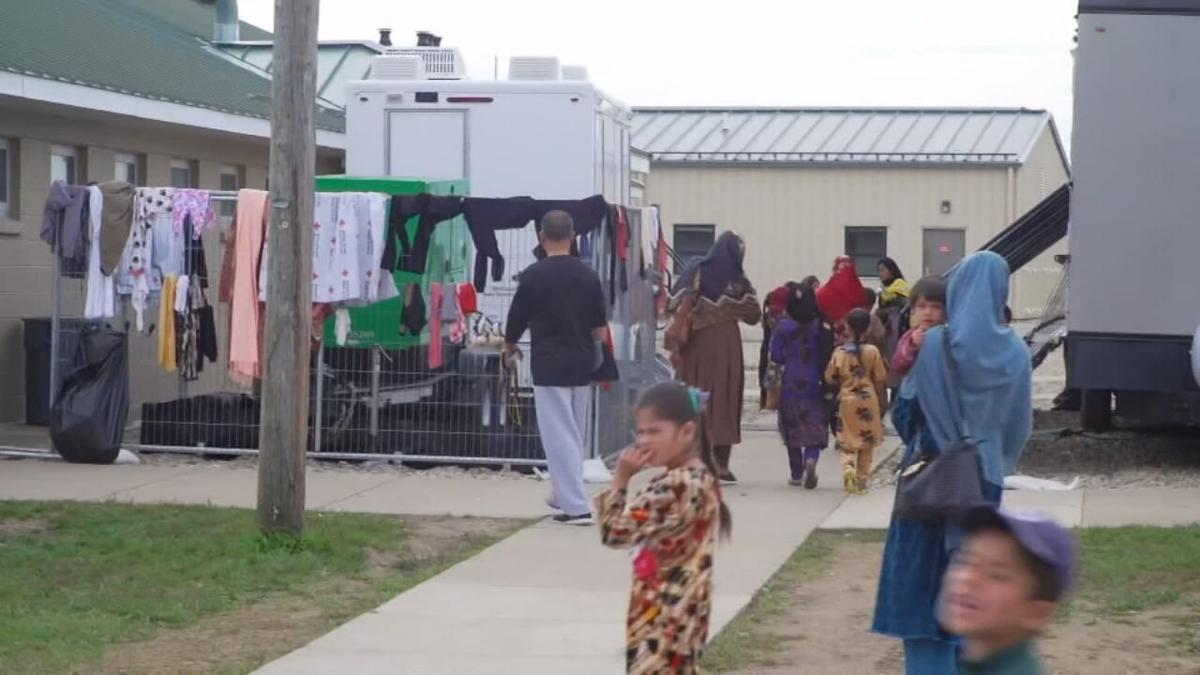 LOUISVILLE, Ky. (WDRB) -- I was seated in a van next to Bill Hansen, the U.S. State Department's Lead at Camp Atterbury for the Indiana branch of Operation Allies Welcome, as we drove by and gazed out the windows at Afghan evacuees walking the streets of Camp Atterbury -- hanging their clothes on wash lines to dry and queuing up at Nathan's Hot Dogs with their kids for lunch.

"This is their Ellis Island," said Hansen, recalling the intake center in New York City where millions of refugees from Europe first landed on American soil to begin their new lives in the Land of Plenty more than a century ago.

According to a report by FOX 59, 10 babies have already been born to Afghan mothers housed at Camp Atterbury since the first of September, automatically becoming U.S. citizens.

There has been one wedding inside the base chapel.

Sulaman Akbarzada married his fiancé Arzo last weekend, fulfilling a promise he made to her in the last days as Afghanistan fell to the Taliban who rolled into Kabul the day the couple were set to be married.

"I give my word to her that, 'When we go to America, I will take a marriage for you,' and thank you for U.S. people for making me being my word so, yeah, Argzo, I love you."

Back home, Sulaman was an electrician. He'd like to resettle in San Diego.

"They can put us anywhere they want," he said, gripping Arzo's hand. "I just want peace."

Approximately 7,000 Afghans have arrived at Camp Atterbury since the start of last month and some have successfully completed the resettlement transition process.

"We've had about 330 that have already transitioned off the base," said Program Coordinator Aaron Batt. "Many of those had people in the communities to which they could go live with. Some have also been picked up by our resettlement agencies and provided housing ."

While some evacuees have left the base, another 320 arrived over the weekend with 150 more expected to check in today.

"Here in the next four days, we're already beginning to see another hundred that are being picked up by their resettlement agencies at Camp Atterbury," said Batt.

The Department of Homeland Security is exploring options for enrolling the youngsters in formal classes while still providing life skills education now.

Everywhere you look at Camp Atterbury you spot children, playing soccer with soldiers, hanging onto their parents, nibbling on snacks.

Reporters toured the intake facilities where Afghan identities are verified; the medical units where evacuees are vaccinated for measles, mumps, rubella, chickenpox and COVID-19 (with flu vaccinations to begin this weekend); a center where guests are given their initial work authorization documents and a dining hall, one of two locations on the base where more than 20,000 meals per day are served.

The diet is Afghan appropriate with the guests providing advice for a menu that serves up friend eggplant in tomato yogurt stew, curry rice with raisins, Afghan beef with rice, stuffed bell peppers and mastawa, which is a rice dish with chickpeas and lamb.

All meals are prepared according to Muslim cultural norms and avoid American food favorites like chicken nuggets, French fries and cheeseburgers.

"We've gone through a couple growing pains," said Batt, "whether it's some changes to the food or some of our logistic movement of people. We've been able to overcome those and we're now at a phase where we can offer educational and recreational opportunities that start to fill the time while they're waiting to be resettled."

Barracks that serve as living quarters are divided into blocks typically of six separate buildings, often segregated by gender with the mothers caring for children under the age of 14.

Each block is overseen by a U.S. military officer who is advised by a resident's council that self-regulates the living environment, including assigning cleaning tasks, settling minor disputes and bringing guest concerns to the supervising authorities.

"We want to be able to give these people the tools to get into their own community and be contributing citizens of that and trying to provide them those training opportunities," said Batt, "but also reward them when they keep their own barracks cared for and pick up the trash in and around."

The residents attend town council-type meetings where women are encouraged to speak up as a result of empowerment groups that off-base female volunteers from the Central Indiana Muslim community have organized.

At one recent meeting, according to an official, while the elder men argued about a woman's style of dress, she responded, "You can't tell me what to do now. We're in America."

About 1,600 Department of Defense personnel in uniform are participating in Operation Allies Welcome at Camp Atterbury and hundreds of them also served in Afghanistan with one soldier meeting his former translator on the base.

For many Afghans, the medical facilities at Camp Atterbury provide them with rare access to on-site medical care for chronic health issues or minor care along with a unique opportunity to meet behavioral and mental health specialists for the first time to help them sort through the trauma of the war-torn land they left behind and their chaotic journey in the States.

On the walls of several locations, Halloween displays are up to prepare the children for the celebration they will have on Oct. 30.

Everywhere you look on the base, pages of coloring books artfully decorated by the Afghan children hang on the walls.

In one of the first warehouse facilities where evacuees are processed when they arrive on the base, after their long journey from the other side of the world, one child has colored a picture of the red, black and green Afghan flag that flew over his homeland.

Another drew a red, white and blue American flag with the words, "I Love U Army," written across a white stripe.

Camp Atterbury is expected to host Afghan evacuees at least through the end of next February.