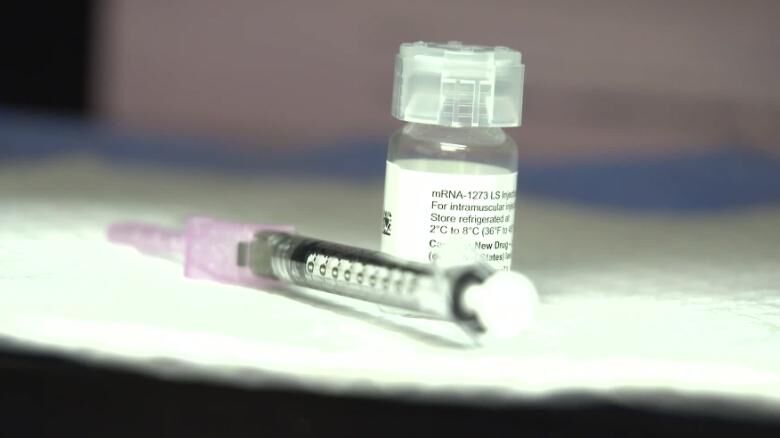 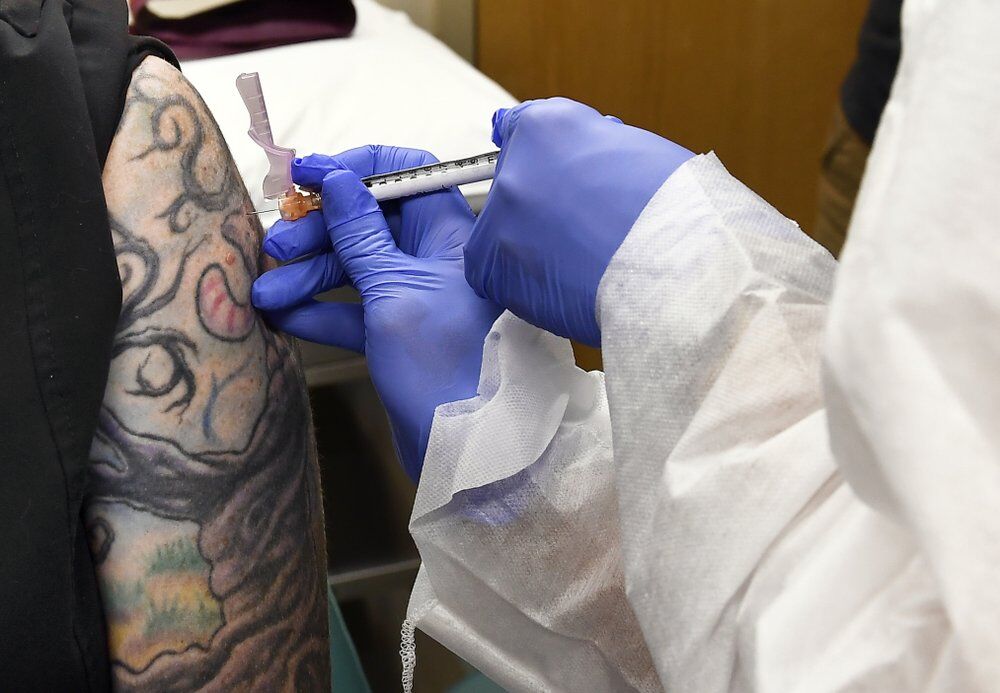 FILE - In this July 27, 2020, file photo, Nurse Kathe Olmstead, right, gives volunteer Melissa Harting, of Harpersville, N.Y., an injection as a study of a possible COVID-19 vaccine, developed by the National Institutes of Health and Moderna Inc., gets underway in Binghamton, N.Y. (AP Photo/Hans Pennink, File)

FILE - In this July 27, 2020, file photo, Nurse Kathe Olmstead, right, gives volunteer Melissa Harting, of Harpersville, N.Y., an injection as a study of a possible COVID-19 vaccine, developed by the National Institutes of Health and Moderna Inc., gets underway in Binghamton, N.Y. (AP Photo/Hans Pennink, File)

"There were a lot of moving pieces. It took several weeks to months to not just organize but to implement and to do safely and effectively. And that was a mild pandemic."

This is not a mild pandemic. And while vaccine manufacturers, public health experts and the federal government are all confident one or more of the coronavirus vaccines being tested now will be shown to work safely by the end of the year, the U.S. and the world will still be a long way from ending the pandemic.

"I feel cautiously optimistic that we will have a vaccine by the end of this calendar year, as we get into early 2021," Dr. Anthony Fauci, who, as director of the National Institute of Allergy and Infectious Diseases, is helping lead the medical battle against the virus, told CNN's Wolf Blitzer Friday.

"But it's not going to be turning a switch off and turning the switch on. It's going to be gradual," Fauci said.

"Having" a vaccine does not mean having a vaccine approved, distributed and into the arms of more than 300 million Americans.

First, any vaccine must either be approved or authorized by the U.S. Food and Drug Administration. That's a process that under normal circumstances can take months or years. While the FDA has promised a speedier process for a COVID-19 vaccine, it must still go through a committee known as the Vaccines and Related Biological Products Advisory Committee, or VRBAC.

The FDA will almost certainly allow a shortcut process known as emergency use authorization, or EUA, but the agency has said it will require an "EUA-plus" that adds at least some layers of scrutiny.

"It's unlikely that a COVID-19 vaccine will receive full approval and broad distribution right away. Instead, the FDA will probably authorize vaccines for use in targeted groups of people at high risk from COVID and most likely to benefit from the vaccine," Dr. Mark McClellan and Dr. Scott Gottlieb, both former FDA commissioners, wrote in a commentary in the Wall Street Journal Monday. "All this means that at least initially, COVID vaccines won't provide the sort of herd immunity that can help extinguish an epidemic."

That will take time -- likely well into next year, even if a vaccine were to be authorized in January, most experts who spoke to CNN predicted.

"People can't be lulled into a false sense of security by knowing the vaccine is coming," Dr. Marcus Plescia, chief medical officer of the Association of State and Territorial Health Officers, told CNN.

Although manufacturers are already making vaccine doses, it takes time. And the US will likely need more than 600 million doses of vaccine -- enough for everyone to get two doses of the vaccine.

A new vaccine, and a plan for getting it out

"Let's say ... at the end of the year, there will be millions and tens of millions of doses available," Fauci said in the CNN interview Friday.

"It won't be until we get into 2021 that you'll have hundreds of millions of doses, and just the logistics constraints in vaccinating large numbers of people -- it's going to take months to get enough people vaccinated to have an umbrella of immunity over the community."

The U.S. just is not ready for a mass vaccination campaign like the one needed to bring coronavirus under control, public health experts agreed.

"I don't think it's going to be seamless," said Plescia.

The biggest mass vaccination program the U.S. undertakes every year is the annual influenza vaccine. Only about half of Americans get a flu vaccine, and manufacturers make and distribute fewer than 150 million doses of it.

Yet it takes a full year from start to finish to formulate, make and distribute flu vaccines every influenza season.

And that's with a vaccine made using familiar technology, and dispensed in ways that people are familiar with -- in pediatricians' offices, at pharmacies, in grocery stores and at clinics.

"You have a playbook for influenza," Shah said. "This is not the same."

Any coronavirus vaccines will involve new technology and a whole new process for distribution, administration and then for payment.

And while anyone can walk into, say, a pharmacy, get a flu shot and leave without ever thinking about it again, coronavirus vaccines will involve a whole lot more trouble and paperwork. People will probably need at least two doses about a month apart. Someone will have to track and follow up on that.

"We have to be able to see who has been vaccinated and who has not been," Dr. Ngozi Ezike, director of the Illinois Department of Public Health, told a public hearing about vaccine distribution organized by the National Academies of Science, Engineering and Medicine.

"To have two doses means that you provide the initial dose and we will need to bring the person back for a second dose a month later," Dr. Jinlene Chan, acting deputy secretary of public health for the state of Maryland, told CNN.

And it's very likely that vaccines made by several different companies will be in use by next year.

"We have to make sure that we give the person the same vaccine for their second dose that they got for their first dose," Chan said.

No vaccination program can start until there are plans in place to manage this.

Plus, the coronavirus vaccine or vaccines will still be experimental, so every person who gets one will need to be tracked to make sure there are no adverse reactions.

There is no plan yet for any of this.

"We have gotten very little information on how this is going to roll out," said Harris County's Shah. "That makes it even more difficult to plan."

One big potential stumbling block is what's known as the cold chain. The two vaccines furthest along in development both must be kept frozen. Moderna's vaccine must be kept at -4 degrees Fahrenheit (-20 degrees Celsius), while Pfizer's must be kept at -94 F (-70 C). While -4 isn't much colder than the optimal home freezer's setting of 0 degrees F, -94 is more of a challenge.

"Throughout -- from every single point the vaccine has to traverse -- we have to maintain it at that temperature. Otherwise, there is a risk of some degradation and the vaccine possibly becoming less effective," Chan said. "We need to make sure that there is some capability to store it appropriately until it is ready to use."

Otherwise, a thawed batch could mean hundreds or even thousands of people get a dud vaccine.

This can be a challenge, said Dr. Carlos del Rio, a vaccine expert at Emory University. "We simply don't have freezers that can reach minus 70 degrees in most clinics," he told the National Academies meeting.

Plescia said Pfizer has a plan to help keep its vaccine cold. "Pfizer is going to have special boxes they ship the vaccines in, packed with dry ice," he said. "Once you get the box, it'll keep the stuff at negative 80 degrees for 10 days."

But it's not clear, Plescia said, if the boxes could be opened and a few doses of vaccine taken out safely. "Even if these boxes work very well, it is still going to add a whole level of challenge," he said.

Taking the mass out of mass vaccination

Past mass vaccination efforts have been just that -- mass. But coronavirus is a respiratory disease, and the last thing anyone should be doing is lining people up or packing them into, say, school gyms to get vaccinated, Chan noted.

"With mass vaccination clinics, it involves bringing large groups of people into a site and vaccinating as many people as possible," Chan said. "How do we do that in a way that reduces the risk of transmitting the very disease that we trying to vaccinate against?"

Illinois' Ezike said some of the experience with test sites may help. "We had these strike teams," she said. "We have been able to convert a lot of different sites into sites where people can drive up. Can you do a vaccination through the [car] window?" she asked.

But to accommodate that, cities and states will have to get busy soon. "We are going to need additional providers," she told the NASEM meeting. "We need mass vaccination clinics and sites. So we really want to recruit lots and lots of essential partners," she added -- especially for the communities that are hardest hit by the pandemic, including meat-packing facilities and remote rural areas.

That means changes in policies and legislation -- another potentially time-consuming process. Medical practice is legislated by states, not by the federal government. "We know that we'll need some expanded scope of practice for different professional groups," she said. For instance, states may want to enable dentists, dental hygienists and even medical school students and veterinarians to vaccinate people.

And that requires some other levels of legislation so that providers can get paid for their time. Changes to health insurance laws may be necessary, including billing codes that provide for a system under which people get vaccinated for no charge.

Because rollout will not be immediate, people will be vaccinated in groups. The National Academies is considering this, as is the U.S. Centers for Disease Control and Prevention's Advisory Committee on Immunization Practices. They, along with private advocacy groups, have already released their own draft blueprints that in general put health care workers, first responders and the most vulnerable at the front of the line. But that's another layer of management for governments to take on.

Many states have old and unwieldy systems for managing all of this, and Ezike said the needed upgrades may take time.

Adding to the timeline is simple biology. The Pfizer and Modern vaccines, at least, will have to be given in two doses, a month apart. After that, it takes about two weeks for immunity to build. That makes for six weeks from the time someone first gets vaccinated to when they can feel safe from infection.

The current atmosphere over mask use has not helped, added Harris County's Shah.

"We have made it a political fight," he said.

"When you make it political in nature, not driven by health and medical considerations, ultimately people will take sides."

Unless a majority of the population gets vaccinated, the virus will continue its spread. Most estimates suggest that 60% to 70% of the population must be immune to provide enough herd immunity to interrupt the spread of the virus. Polls indicate that only about half of Americans feel confident right now about being vaccinated.

And if vaccines are less than fully effective, that may mean even more of the population needs to be vaccinated to have an effect on spread.

Then there are the unknowns.

"Testing has not been seamless at all. There are going to be some glitches," Plescia said.

"I think there is a good chance there is going to be a vaccine that works and gets us out of this, but it is hard to believe that it is going to go really smoothly, given all the things that could happen."

Shah is ready for unpleasant surprises. "This is a super slick virus that has broken every rule in the book," he said.