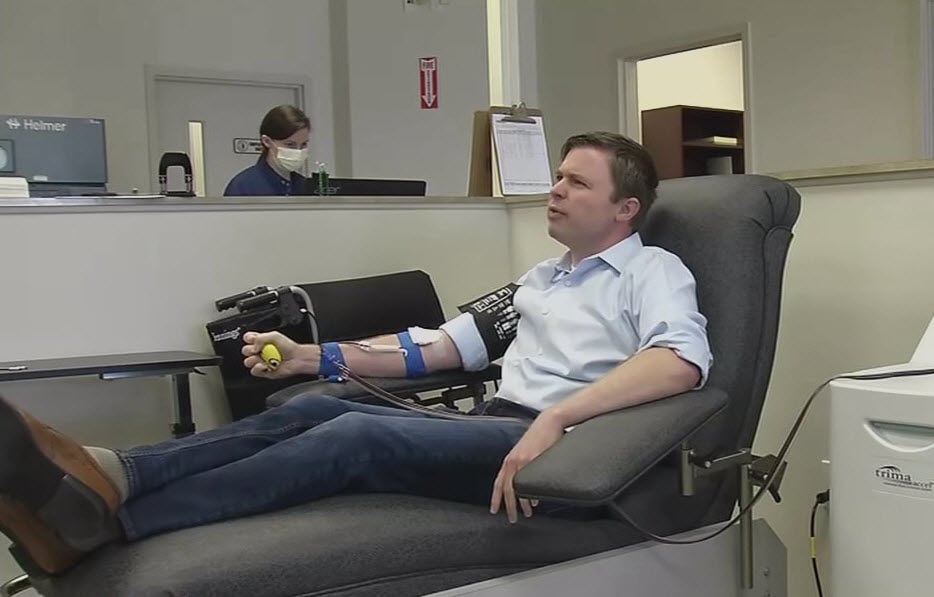 Dr. Brian Derhake, an anesthesiologist and recovered COVID-19 patient, was one of several people who showed up at the Kentucky Blood Center Thursday to donate plasma with the hopes that it will help others. 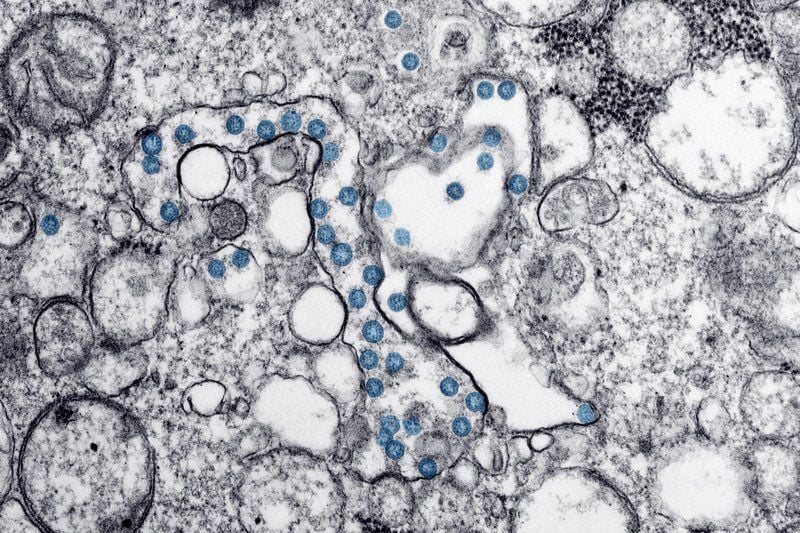 This 2020 electron microscope image made available by the U.S. Centers for Disease Control and Prevention shows the spherical particles of the new coronavirus, colorized blue, from the first U.S. case of COVID-19. Antibody blood tests for the coronavirus could play a key role in deciding whether millions of Americans can safely return to work and school. But public health officials warn that the current “Wild West” of unregulated tests is creating confusion that could ultimately slow the path to recovery. (Hannah A. Bullock, Azaibi Tamin/CDC via AP)

Dr. Brian Derhake, an anesthesiologist and recovered COVID-19 patient, was one of several people who showed up at the Kentucky Blood Center Thursday to donate plasma with the hopes that it will help others.

This 2020 electron microscope image made available by the U.S. Centers for Disease Control and Prevention shows the spherical particles of the new coronavirus, colorized blue, from the first U.S. case of COVID-19. Antibody blood tests for the coronavirus could play a key role in deciding whether millions of Americans can safely return to work and school. But public health officials warn that the current “Wild West” of unregulated tests is creating confusion that could ultimately slow the path to recovery. (Hannah A. Bullock, Azaibi Tamin/CDC via AP)

LOUISVILLE, Ky. (WDRB) — Hospitals are using plasma from people who have recovered from the coronavirus in an effort to find an effective treatment for patients currently battling the deadly disease.

The plasma taken from patients who have recovered from COVID-19 will be used to help others fighting for their lives in intensive care units in hospitals across the state. Although research is still early in its early phase, it’s believed that antibodies in plasma from recovered patients can help attack the virus in others who have tested positive.

The Kentucky Blood Center said nearly 10 people volunteered to donate plasma on Thursday. The plasma will be quickly distributed to hospitals around the state for patients whose doctors believe they can benefit from it.

Hospitals and scientists in Kentucky are teaming up to participate in potentially life-saving research revolving around testing plasma for antibodies and developing a donor registry. Gov. Andy Beshear and University of Louisville President Neeli Bendapudi announced the initiative — a joint effort along with University Hospital, Baptist East, and Norton Healthcare — Wednesday during a news conference.

So far, COVID-19 testing has been limited to the nasal swab. Now, scientists are testing patients’ blood to see if antibodies in convalescent plasma could help others critically ill with the virus recover.

"The whole idea was to do something truly unique here," said Dr. Cedric Francois, Apellis Pharmaceuticals founder and CEO. "It’s a little bit early to say this is going to work, but everything indicates that it’s very promising."

Apellis Pharmaceuticals, a bio-tech company in Louisville involved with drug development and scientific research, is working along with the area hospitals to coordinate the collection, testing, and redistribution of plasma. The testing will be synchronized in phases between all the hospitals, and it’ll begin with those in the medical field, Francois explained.

"Starting with those that are most exposed," he said. "Think of nurses or physicians who work on the floors with these COVID patients. And then work our way down."

The results from these tests could show how a person’s body was able to fight off the virus. On top of that, researchers are looking for what’s called the "neutralizing capacity" of those antibodies, or simply, how good those antibodies are at getting rid of the virus.

"When you look at antibodies, you can either get a ‘yes’ or ‘no’ answer. It’s there. It’s not," Francois said. "Or you can look at how many antibodies you have and strength, which is much, much more important."

The research could show that, if you have good antibody levels, it probably means you are more protected if exposed again, Francois said. Kentucky is only one of 12 places in the country able to do this level of testing.

The teams will first run some validation steps to ensure the process and flow of information works well. Then, the testing of health care workers' plasma will begin within weeks and could expand in a couple months.

"It allows us not just to understand what the state of immunity and exposure has been in our healthcare workforce," Francois said, "but then also to take those patients with the best antibodies and sample their blood to use as a potential treatment for patients who are in the advanced stages and at risk of dying."

The hope, eventually, is to be able to test anyone in any county.

Dr. Kenneth Anderson, the chief medical officer for Baptist Health Louisville, said teaming up with the other three hospitals and the research company sets Kentucky apart. The partnership allows more people to be tested, which will provide more reliable results and a bigger donor registry. Anderson said once they can determine what signifies strong antibodies for COVID-19, then they will be able to easily share those plasma donations among all the hospitals.

A team with Norton Healthcare has been dedicated for weeks already to building an initial pool of patients that could be good plasma donors.

Jason Smith, the chief medical officer for U of L Health, said they will be testing on several levels. A basic antibody screening test will show if there is a presence of antibodies. Then, there will be a more invasive test to show the level of antibody response.

The blood tests will also provide information on the person’s blood type, so that if and when the plasma is donated and banked, then it will be documented on the registry for easy access.

"It’s an exciting time and an exciting project," Smith said, "and we can hopefully get a lot of information out to not just our institutions but around the country."

This kind of research is happening worldwide, but Kentucky’s initiative is putting the commonwealth ahead of the curve.

"Within weeks, we will have much more information," Francois said about the international research. "And, by the time that comes out, we will have not just hopefully a lot of plasma donors on our registry, but also donors for whom we know exactly how good their plasma is."

Brian Derhake, M.D.A., an anesthesiologist at Baptist East, was among those donating plasma Thursday. He tested positive for the virus three weeks ago but has since tested negative. As a doctor, he said the desire to help people is second nature, and he chose to donate his plasma because helping others is the right thing to do.

"On a personal level, this is just being a human being," Derhake said. "I think anybody in my situation would consider doing this, and I hope this plasma helps get some people off the ventilator."

Dr. Derhake said he has a family friend who tested positive and was in the ICU. After receiving plasma from a recovered patient, she has been doing better.

One plasma donation can help two patients. If you're a recovered COVID-19 patient in Kentucky, and would like to donate your plasma, CLICK HERE for more information.