LOUISVILLE, Ky. (WDRB) -- The everyday citizen could soon help hold Louisville Metro Police accountable if and when Metro Council passes an ordinance that would create more oversight of the department.

On Wednesday afternoon, the council Public Safety Committee began considering the ordinance, which would create a Civilian Review & Accountability Board that would guide an independent Inspector General in reviewing any LMPD disciplinary matters.

The legislation was thought up by Councilwoman Paula McCraney, D-7, and many others over the course of months. McCraney said the work group that drafted the ordinance considered input from LMPD, the Fraternal Order of Police, the ACLU, attorneys, prosecutors and civilians during a series of weekly meetings.

"We turned over every stone imaginable, and I think we've come up with something that everybody can live with — both the community, all of the citizens, and the police department," she said.

(The current draft is embedded below.) 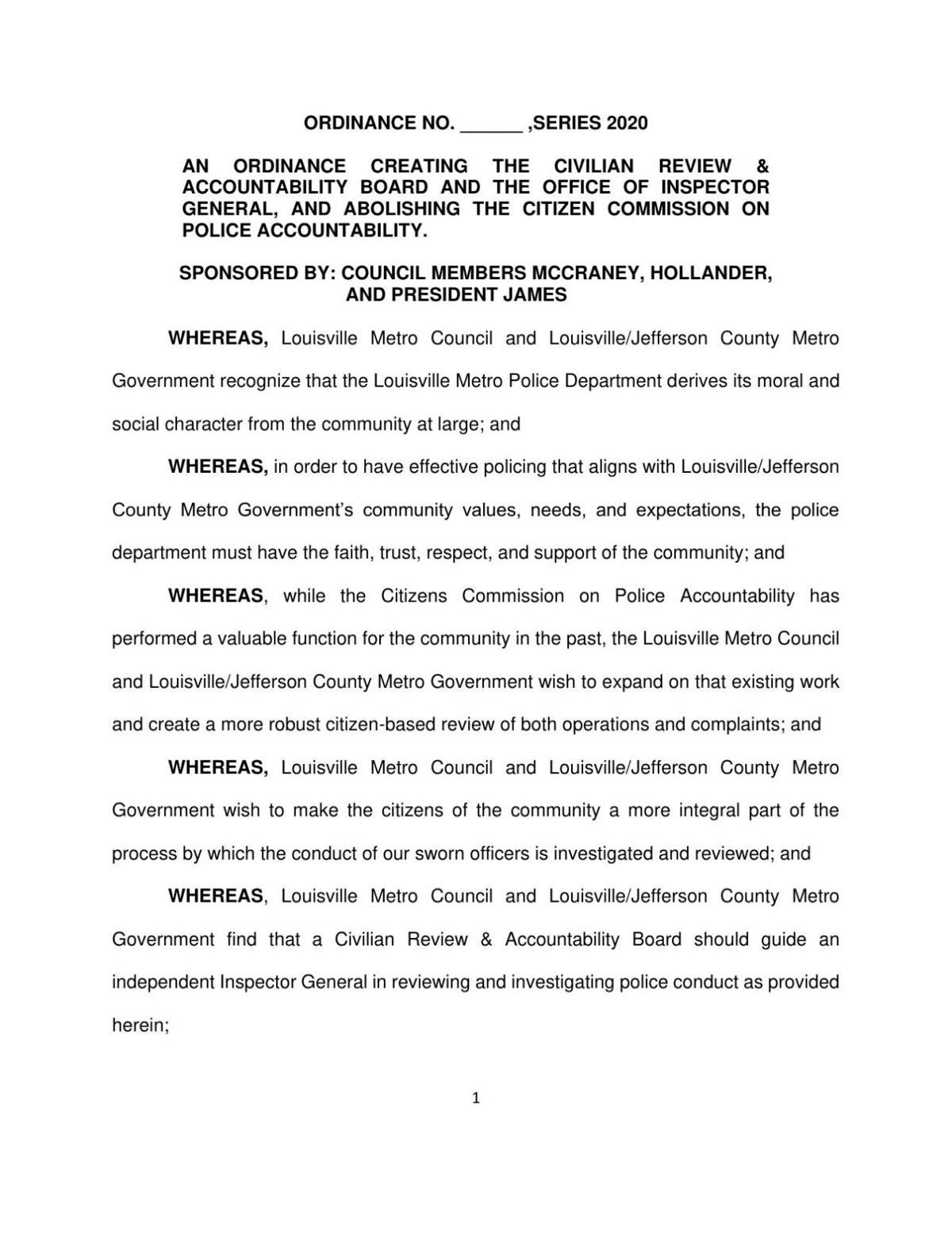 The board would consist of 11 members that would be officially appointed by Mayor Greg Fischer and approved by Metro Council. Council would help pick three of the members; groups like GLI, the Louisville Chapter of the NAACP, Louisville Urban League and the University of Louisville Department of Public Health would pick four; and Fischer would pick four. Any or all of the mayor's picks can be citizens who nominate themselves on an online portal. Extensive training would be provided by the city to all 11 members, since no experience is necessarily required.

"You can just be ordinary 'Joe Blow' and apply to be on this board," McCraney said.

No current city employees would be allowed to serve on the board. Additionally, the ordinance would abolish the Citizens Commission on Police Accountability, which some members criticized as having a too limited function.

For the position of Inspector General, while law enforcement experience isn't required, the ordinance says "candidates with an educational and work background in law, criminal justice, management analysis, public administration, investigations, or other relevant fields are preferable."

According to a press release from Fischer's office, the work group recommends the Inspector General would have the authority to investigate alleged incidents involving any members of the LMPD and any member of the public and have subpoena power, which would require a change in state law. His or her duties may include "examining patterns and practices with LMPD; reviewing policies, procedures and operations within LMPD; providing recommendations on improving operations to the Mayor and Metro Council; investigating complaints; and other operations as needed."

In the release, Fischer voiced approval of the proposal as it's currently written.

“This independent review panel will become an integral component to rebuilding community trust and legitimacy, and it will provide residents with an of extra avenue of police accountability,” he said. “I applaud the members of the work group for their commitment to transparency and look forward to signing this into law once approved by Metro Council.”

However, during the Wednesday meeting, some members expressed a desire to amend portions of the ordinance. For instance, Councilman James Peden, R-23, argued the mayor has too much control over who's on the board in the current draft.

"I have a giant problem with that," he said.

Pastor Tim Findley Jr., a frequent protester and the pastor of the Kingdom Fellowship Christian Life Center on East Broadway, has a more fundamental problem with the legislation.

"I think this oversight committee — it can be beneficial," he said. "But my issue would be are we simply providing oversight to a desperately flawed and broken system."

"I feel confident that it is a good step that will help our community heal," she said. "We want to bring healing, and a part of that healing is for the community and the LMPD to start merging with more respect for one another."

After time restraints ended Wednesday's discussion, the Public Safety Committee plans to give the ordinance additional consideration, likely amendments and possibly a vote when it meets again in two weeks.