Tuesday's termination letter, which made Hankison's firing official, was issued following the completion and review of an investigation by the Public Integrity Unit and a "pre-termination meeting" that was also held Tuesday, according to the letter. That investigation was launched March 13, the day on which Taylor was killed.

Hankison, along with Sgt. Jon Mattingly and Detective Myles Cosgrove, raided Taylor’s apartment on March 13. Police shot and killed Taylor after her boyfriend, Kenneth Walker, opened fire. Walker has said that he believed he and Taylor were being robbed. Police have said the officers knocked and announced their presence before entering the apartment.

Schroeder in an initial termination letter wrote that Hankison "wantonly and blindly fired 10 rounds" into a patio door and window of Taylor's apartment, creating a "substantial danger of death and serious injury" to Taylor and three occupants of other apartments.

Schroeder told Hankison in the letter that the detective's conduct in Taylor's shooting was "a shock to the conscience," and that he was "alarmed and stunned" at Hankison's use of deadly force. Schroeder also wrote that Hankison's actions violated standard procedure.

Schroeder said Tuesday that Hanksion "displayed an extreme indifference to the value of human life" when serving the warrant at Taylor's home.

According to Tuesday's letter, Hankison may file an appeal requesting the department's merit board to review the firing within the next 10 days. If and when that appeal is filed, the board will schedule a public hearing to review the termination.

Taylor's shooting for weeks has prompted protesters to march in Louisville and demand justice in her death. When Hankinson's planned firing was announced, protesters said they still want more action, including the firing of the other officers involved and the filing of criminal charges.

Walker initially was charged with attempted murder, but the charge has been dismissed.

Jefferson Circuit Judge Mary Shaw approved the "no-knock" warrant for the raid, allowing the undercover narcotics detectives to burst in without announcing their presence. Their main target was a suspected drug dealer, Jamarcus Glover, who had once dated Taylor. Police argued before Shaw that they believed Glover was using Taylor's apartment for deliveries.

You can read Tuesday's termination letter in full below: 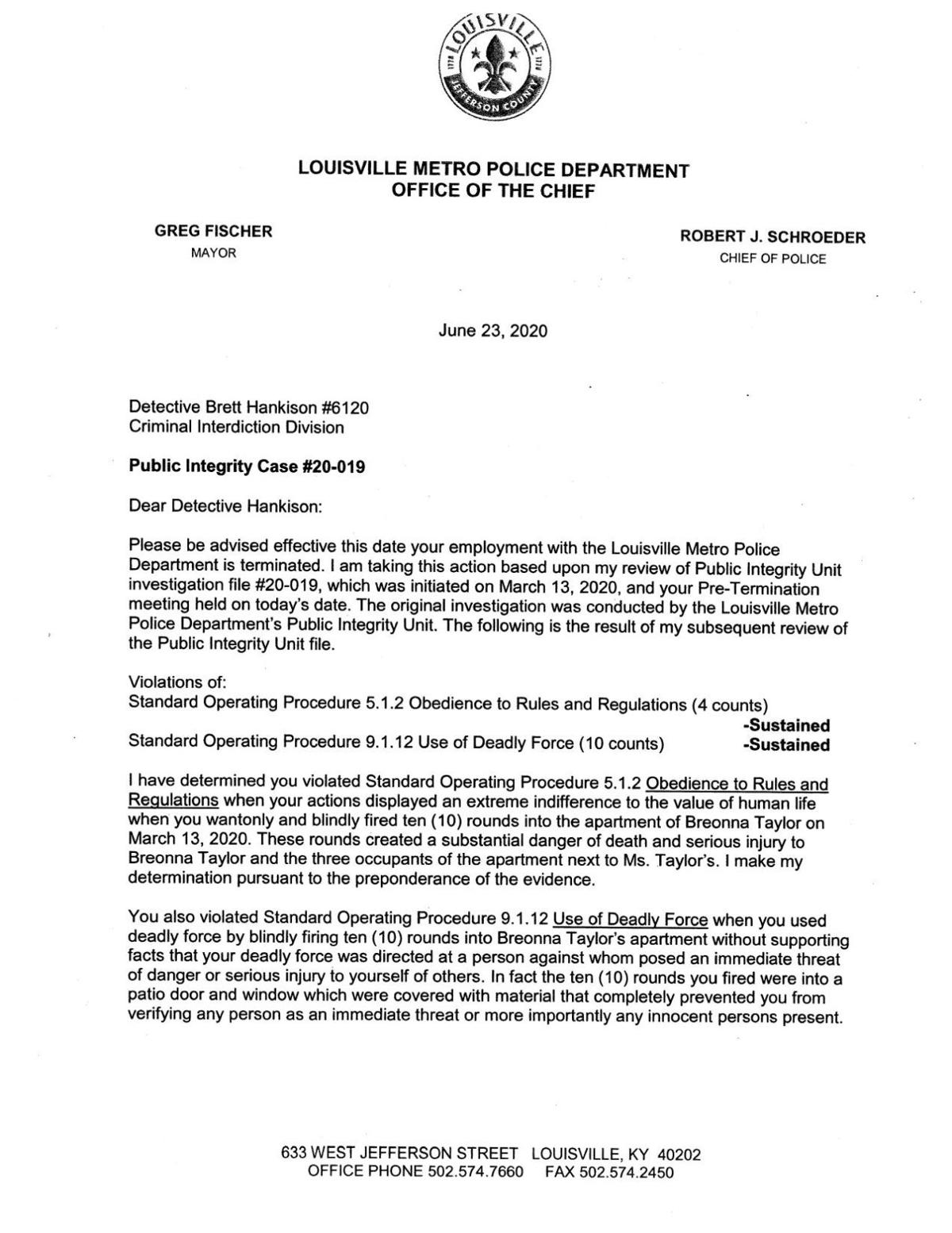