LOUISVILLE, Ky. (WDRB) -- The family of a Louisville woman who died in 2020 of COVID-19 filed a lawsuit Thursday against the Chinese government.

The lawsuit states Janice Mary Kelly, died in November 2020 from pneumonia and acute hypoxic respiratory failure brought on by a COVID-19 infection. According to her obituary, she went to the old Loretto High School in west Louisville before growing up to teach at the Kentucky School for the Blind and build a family of four children, five grandchildren and four great-grandchildren.

The lawsuit, filed by Kelly's "estate," said the defendants are "responsible for the enormous death, suffering, and economic losses they inflicted on the world, including Janice Mary Kelly, and they should be held accountable."

The defendants are listed as:

The lawsuit claims the defendants tried to minimize the consequences after COVID-19 began traveling around the world, killing millions of people. It alleges China "(engaged) in a coverup and misleading public relations campaign by censoring scientists, ordering the destruction and suppression of valuable research and refusing cooperation with the global community, all in violation of international health standards." 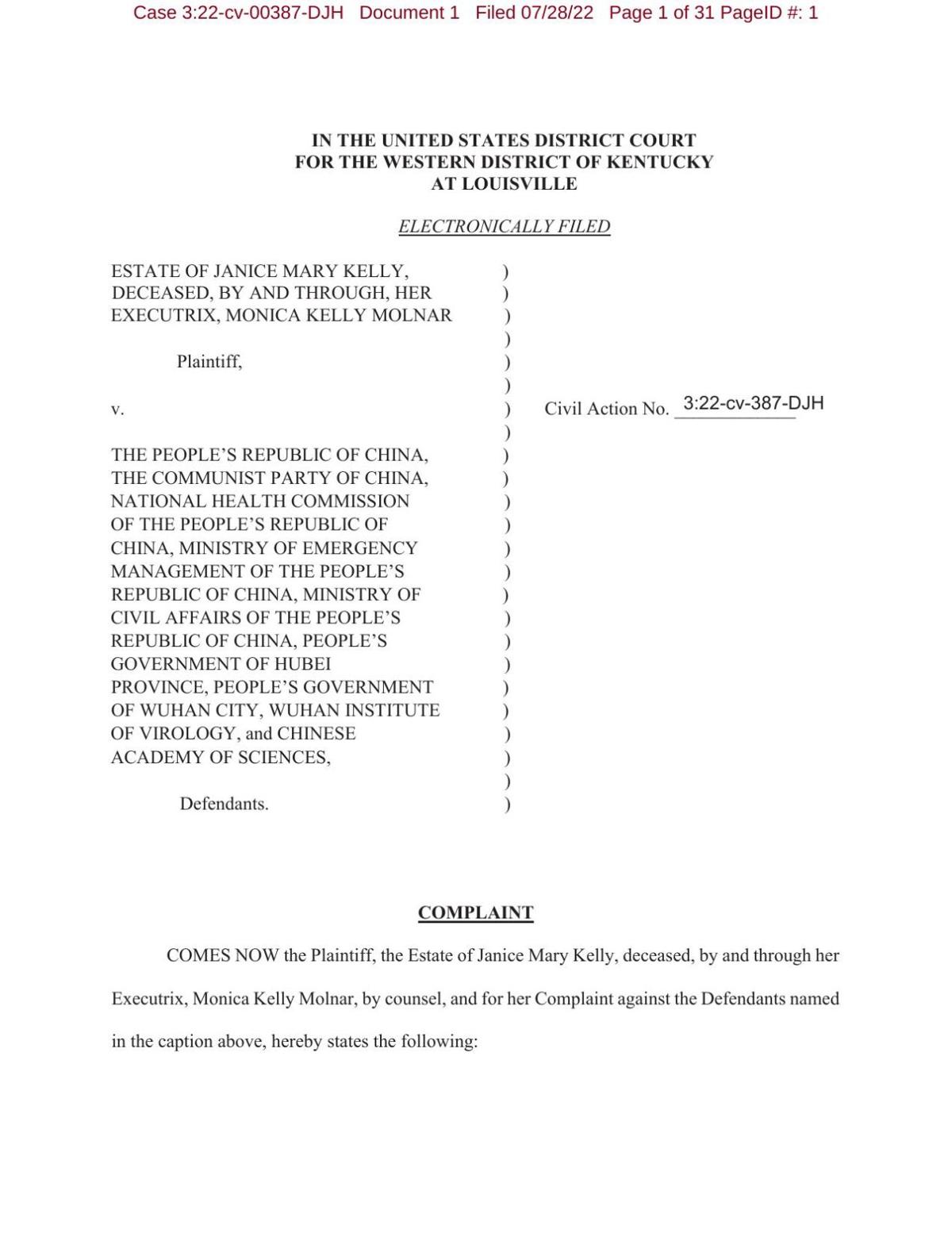 A somewhat similar lawsuit — filed in 2020 by Missouri Republican Attorney General Eric Schmitt that blamed China for the pandemic — was thrown out earlier this month by a federal judge. U.S. District Judge Stephen Limbaugh said in his 38-page ruling that in this case federal rules prohibit a sovereign foreign entity from being sued in American courts.

The complaint alleges that Chinese officials are "responsible for the enormous death, suffering, and economic losses they inflicted on the world, including Missourians." Schmitt said the Chinese government lied about the dangers of the virus and didn't do enough to slow its spread.

"All in all, the court has no choice but to dismiss this novel complaint for lack of subject matter jurisdiction," Limbaugh stated in the final line of the dismissal order. The judge noted earlier in the opinion that the civil suit against China is one of many filed "amidst the wreckage of the COVID-19 pandemic."

Kelly's estate hired Attorney Jason Todd Hardin, with Hardin Law PLLC in Louisville. The suit asks for an undisclosed amount of damages as well as a jury trial.

"The Defendants, by their acts and omissions as set forth above, acted toward the late Janice Mary Kelly with oppression, fraud, malice, gross negligence and/or reckless disregard for the lives and safety of others ...," the lawsuit states.