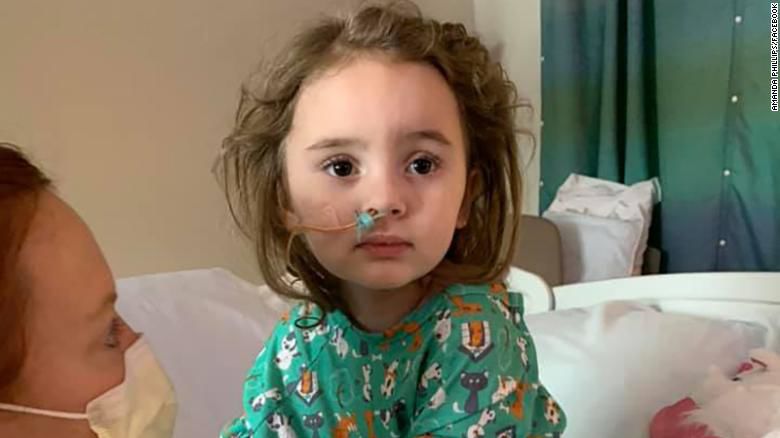 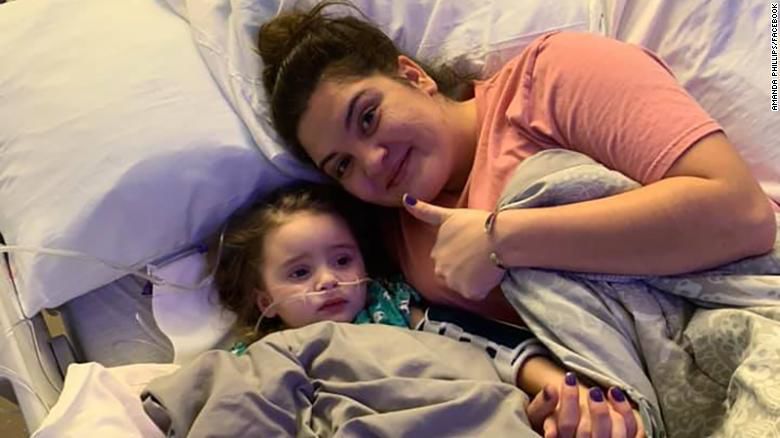 LOUISVILLE, Ky. (WDRB) -- A 4-year-old Iowa girl is now blind because of the flu, and her parents have one simple message: Get your child vaccinated.

"If I can stop one child from getting sick, that's what I want to do," said Amanda Phillips. "It's terrible to see your child suffer like this."

According to a report by CNN, Jade DeLucia, who did not receive a flu shot this season, caught the flu a few days before Christmas and spent nearly two weeks in the intensive care unit at the University of Iowa Stead Family Children's Hospital.

"She is lucky to be alive," said one of her physicians, Dr. Theresa Czech. "She's a little fighter. And I think she's super lucky."

Her parents, who have missed work to care for Jade and face medical bills, have started a GoFundMe page.

Every year, dozens of children die from the flu, and most of them had not received a flu shot, according to the U.S. Centers for Disease Control and Prevention. Thousands more children are hospitalized.

Many of those who become seriously ill or died were perfectly healthy before they contracted the flu.

Jade is one of them.

On Dec. 19, Phillips noticed that Jade wasn't quite her usual bubbly self.

A few times over the next several days, Jade spiked a low-grade fever. Medicine brought it down easily, and she went back to playing with her older sister, Catalina.

"She was running around, having fun, eating normally, asking for snacks," her mom remembers. "It was just -- it's a little bug. She'll get over it."

Phillips thinks back to those four days, Dec. 19 through Dec. 23, and wracks her brain for something that might have told her what was about to happen.

"We have to go to the emergency room"

The night of Dec. 23, while Phillips was working her shift as an assistant manager at a Dollar General store, Jade's father, Stephen DeLucia, tucked Jade into bed.

The next morning, the family was ready to leave the house to spend Christmas Eve with Phillips' parents. But Jade hadn't yet woken up.

When her father went to check on her, Jade was lying in bed, unresponsive. And her body was burning hot.

"I yelled at him -- I was like, 'We have to go. We have to go to the emergency room. This isn't right. Something's not right with her," Phillips said.

When they arrived at Covenant Medical Center, Jade's body started shaking uncontrollably, and her eyes rolled to the back of her head.

She was having a seizure.

Doctors filled the room. They said Jade needed to be transferred to the children's hospital at the university of Iowa in Iowa City, about 80 miles away. There was no time for an ambulance. She would have to be flown.

Her parents watched the helicopter take off.

On Christmas Day, Phillips and DeLucia found out flu had affected her brain.

Called encephalopathy, it's a known complication of the flu, according to the CDC.

Doctors showed Jade's parents the MRI results. Her brain was "lit up like a Christmas tree," her mother remembers.

Over the next few days, Jade remained almost completely unresponsive.

Czech, a pediatric neurologist, was brought in to consult on Jade's case. On Dec. 31, she told Jade's parents her specific diagnosis:  acute necrotizing encephalopathy, or ANE, a type of encephalopathy usually caused by a viral infection.

ANE is so rare there are few studies on how children fare. Czech found one study that looked at four children with ANE. Three of them died.

"It's been 7 days. 7 days of feeling like Jade was slipping away and that there was no hope. No hope of her ever coming back to us," her mother wrote on Facebook that day. "All because of the flu."

Czech prescribed steroids to calm the swelling in her brain.

CNN visited Jade's family on Jan. 1. Her family started the new year with a prayer.

"Heavenly father, will you wrap your angels around Jade this morning  and throughout the day and pray for healing today," the prayer went.

Then, they visited Jade at the hospital -- and her mother came out beaming.

What had seemed so unlikely had happened:  Jade woke up.

"She's got her eyes open. She's looking around. We got a couple of hand squeezes! And then we got a smile!" she said.

Over the next few days, Jade kept getting better and better. Her breathing tube came out. She could sit up. She could eat -- and specifically requested chocolate pudding.

"Jade said 'Hi mommy' and you guys I'm a mess," Phillips wrote on Facebook on Jan. 5.

But then Jade's parents and doctors noticed something.

When her mother put Jade's favorite stuffed animal -- a white unicorn -- in front of her face, she didn't look at it.

When she threw a little ball, she didn't watch it as it went up in the air.

An ophthalmologist came in and examined Jade's eyes. Everything looked fine.

The problem wasn't with her eyes. It was with her brain, which had suffered because of the flu.

"It affected the part of her brain that perceives sight, and we don't know if she is going to get her vision back," said Czech, Jade's neurologist. "In about three to six months from now, we'll know. Whatever recovery she has at six months, that's likely all she's going to get."

Jade might also have cognitive or developmental problems, such as learning disabilities, Czech added. She said that would be determined in the months and years to come.

One of the first things she did was touch her sister's face and then pulled her close and cried.

Relieved to have her daughter back home, Phillips wants to get a message to other families about the flu shot.

Last March, when Jade's sister had her annual well visit at the pediatrician, both girls received a flu shot. Phillips said she thought that shot was good for an entire year. She didn't realize she needed to get the girls vaccinated again for the new 2019-2020 flu season.

Since the flu virus changes year to year, the vaccine also changes. Flu vaccines become available at the end of the summer, and the CDC recommends getting one by the end of October to protect against flu in the upcoming winter.

This year, the flu has been particularly tough on children. That's because the predominant virus has been influenza B, which affects children more than adults. So far, 32 children in the United States have died from flu this season, 21 from the influenza B strain of the virus.

"We want parents to know they should get a flu shot every season," Phillips said.

It's true that the flu vaccine is only about 40-60 percent effective at preventing the flu, according to the CDC.

What parents need to know is that a vaccine is very effective at preventing children from becoming so sick from flu that there are life-threatening complications, like Jade experienced.

"I'm less interested in whether the vaccine prevents all cases of runny noses and feeling cruddy and having to stay home from school because of the flu," Ratner said. "That's no fun, but you get the vaccine not so much to prevent that as to prevent the chances of having a horrible complication of the flu."

Back in Iowa, Phillips and DeLucia are settling into their new normal with Jade, Phillips writing on Facebook on her daughter's first night home: "My brave girl, who cannot see, but is loved by so many."

Copyright 2020 by WDRB Media and CNN. All rights reserved.