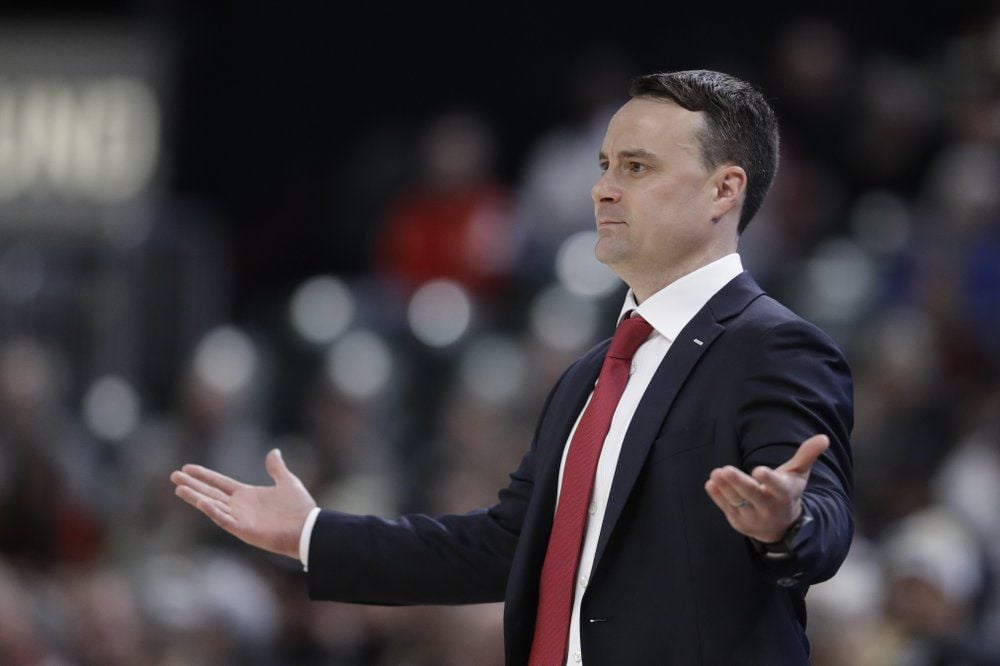 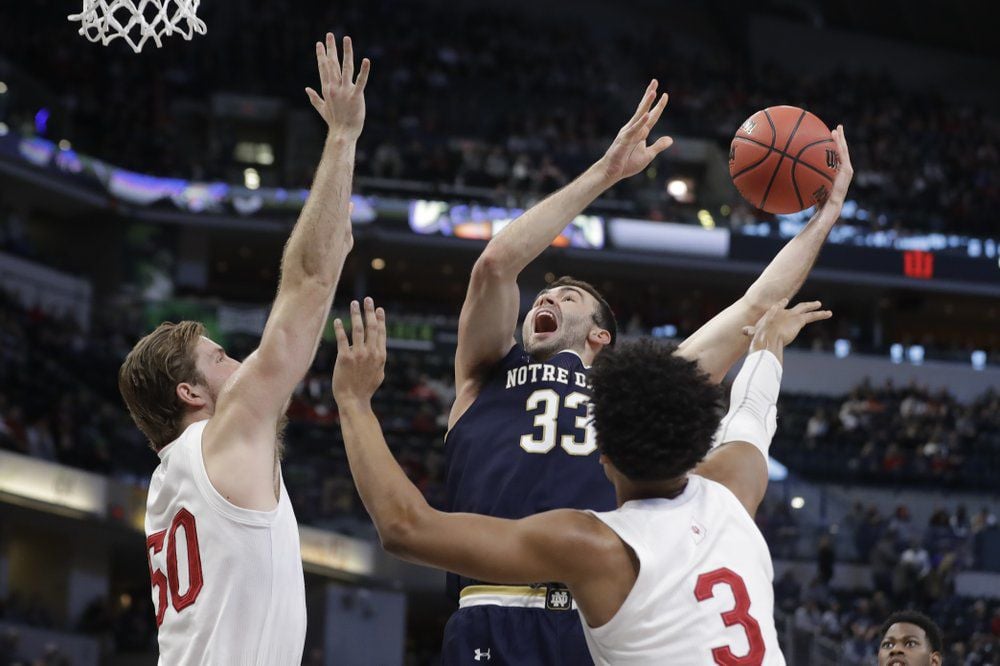 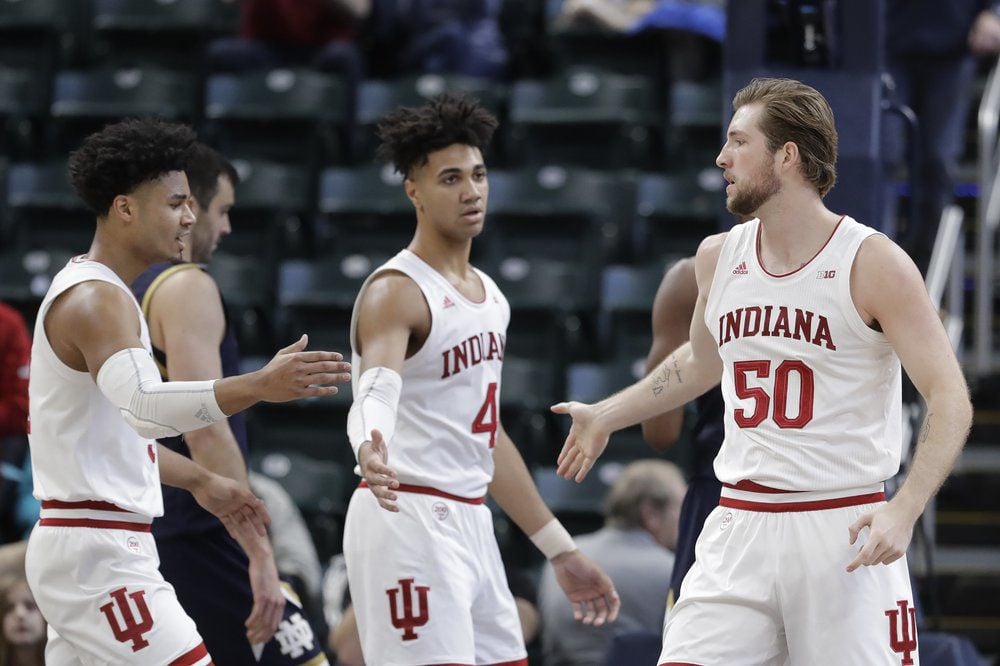 Indiana's Joey Brunk (50) is congratulated by Justin Smith (3) and Trayce Jackson-Davis (4) after Brunk made a shot and was fouled during the first half of an NCAA college basketball game against Notre Dame, Saturday, Dec. 21, 2019. (AP Photo/Darron Cummings) 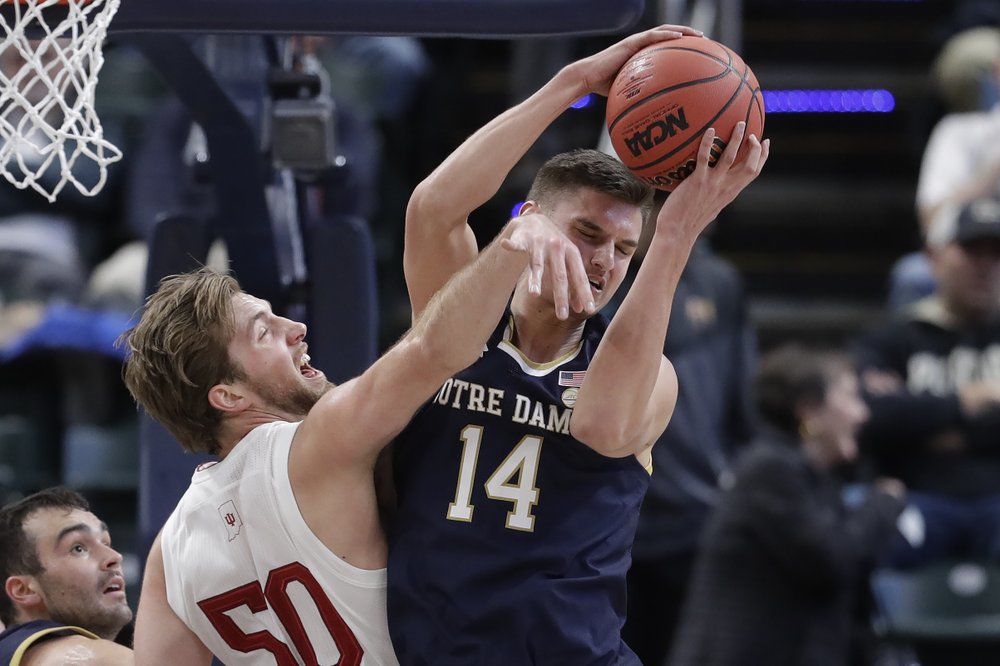 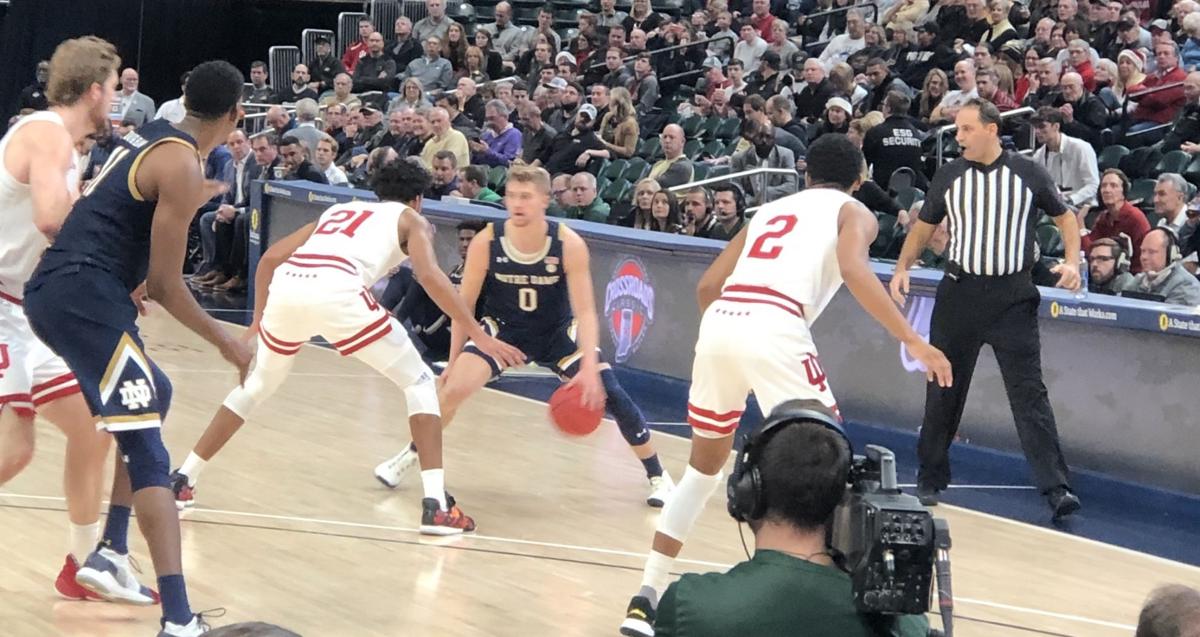 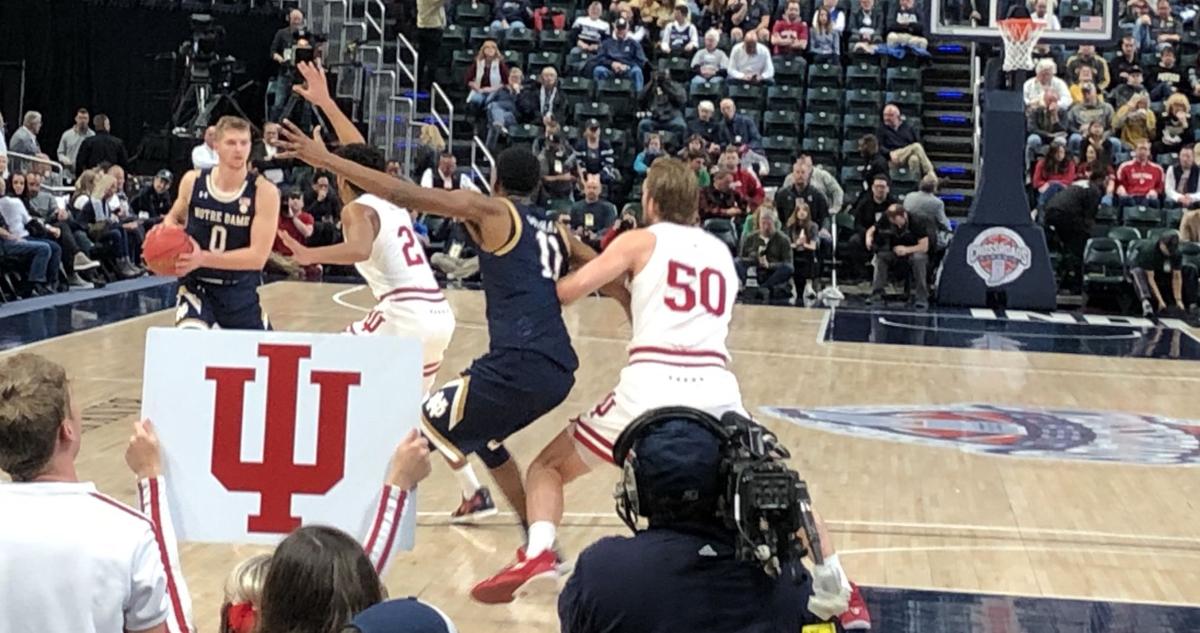 Indiana's Joey Brunk (50) is congratulated by Justin Smith (3) and Trayce Jackson-Davis (4) after Brunk made a shot and was fouled during the first half of an NCAA college basketball game against Notre Dame, Saturday, Dec. 21, 2019. (AP Photo/Darron Cummings)

INDIANAPOLIS, Ind. (WDRB) — I saw a former Indiana University basketball player in the concourse at Bankers Life Fieldhouse before the Hoosiers played Notre Dame Saturday afternoon in the Crossroads Classic.

I kept my question simple: How would the 10-1 Hoosiers fare against coach Mike Brey and the Fighting Irish?

The player, who I will not name, kept his answer nearly as simple: "I’ll answer the question, but only if you tell me which Indiana team is going to show up?"

Would it be the one that handled Florida State at home and Connecticut in Madison Square Garden? Or the one that got crunched at Wisconsin and then gave up 90 points against Nebraska eight days ago?

Actually, it was both.

Final score: Indiana 62, Notre Dame 60 — as the Hoosiers were at their frenetic best and worst, leading by 17 and trailing by 5, all in the final 17 minutes.

About 25 minutes of reasonable basketball was wiped away by nearly 15 minutes of abysmal basketball. The Hoosiers coughed up a 17-point second-half lead. They failed to score on nine of 10 possessions and nearly lost a game they should have won by 20.

Well, I wasn't going to mention the percentage.

"I did, and he did, too," Miller said. "He needed to stop walking around with his head down and acting like people didn't know who he was because he wasn't shooting the ball real well. He can shoot it."

"Everybody told me to keep shooting," Franklin said. "I put a lot of work in after practice which helps out. You saw it helped out today."

"We felt we had to give looks from outside because they were so potent from inside all day," Brey said. "To his credit, he stepped up and made some big ones.

"I felt like maybe we violated the basketball gods maybe a little too much and by not guarding the arc ... he rose up and made a bit one. It's a big time play."

"Armaan was good all day," Miller said. "Kind of showed his courage ... we were struggling offensively. He was the one guy who had made a few plays for us."

That quartet allowed Indiana to overcome a 3-for-22 shooting performance by Justin Smith, Al Durham and Robert Phinisee.

The Hoosiers played the game at Notre Dame’s modest pace. They struggled to score after the Irish switched from zone to man-to-man defense. They threw the ball away for no reason too many times.

But make Indiana 11-1 — and make a note that the Hoosiers are in the discussion for the most confounding 11-1 team in the country. They won the game — and lost one spot, slipping to No. 34 in Ken Pomeroy's computer power formula.

They’re one win away from finishing the non-Big Ten portion of their schedule unbeaten, but you won’t find anybody barking that Miller’s team is a lock to end the program’s three-season absence from the NCAA Tournament.

The Hoosiers slogged through 40 minutes against a Notre Dame team unlikely to make the NCAA Tournament.

Notre Dame is in free fall. Brey doesn’t have a guy on his roster who would have started on the Fighting Irish's NCAA Tournament Elite Eight teams from 2015 and 2016,.

You could consider it a coming-out party for freshman Franklin. That was the good news for Indiana.

Eight days after Franklin missed all four of his 3-point attempts against Nebraska, he played like a guy who deserves major time in the rotation.

Franklin made both of his shots from distance in the first half — and also made three free-throws when he was fouled on another attempt.

In the second half, Indiana let the Irish cut a 16-point lead to 10. Enter Franklin. He took the ball on the right wing, attacked with confidence and made an acrobatic, twisting layup in traffic. He was also fouled but missed the free throw. He added two more threes, including the game winner, later in the second half.

Miller stayed with his starting lineup longer than he had in IU’s first 11 games, going with Devante Green, Al Durham, Justin Smith, Joey Brunk and Trayce Jackson-Davis for 6 1/2 minutes.

Turnovers were an issue. Although Notre Dame missed its first seven shots as well as 12 of its first 17, IU failed to generate any separation because Miller’s team threw the ball away six times and made only a single 3-point shot.

For most of this season Indiana has led the nation in getting to the foul line. Notre Dame does not foul. An Indiana team that averaged nearly 30 free throw attempts per game shot four foul shots in the first half and only a dozen for the game.

The Hoosiers started Christmas break after the victory. They will reassemble in Bloomington, Indiana, before Dec. 26 to prepare for their final nonconference game — a visit from Arkansas, which is 9-1 (losing at Western Kentucky).

Indiana split a pair of game with the Razorbacks last season. Their loss in Fayetteville, Arkansas, likely cost Miller’s team a spot in the NCAA Tournament, but IU did win the rematch in the NIT at Simon Skjodt Assembly Hall.