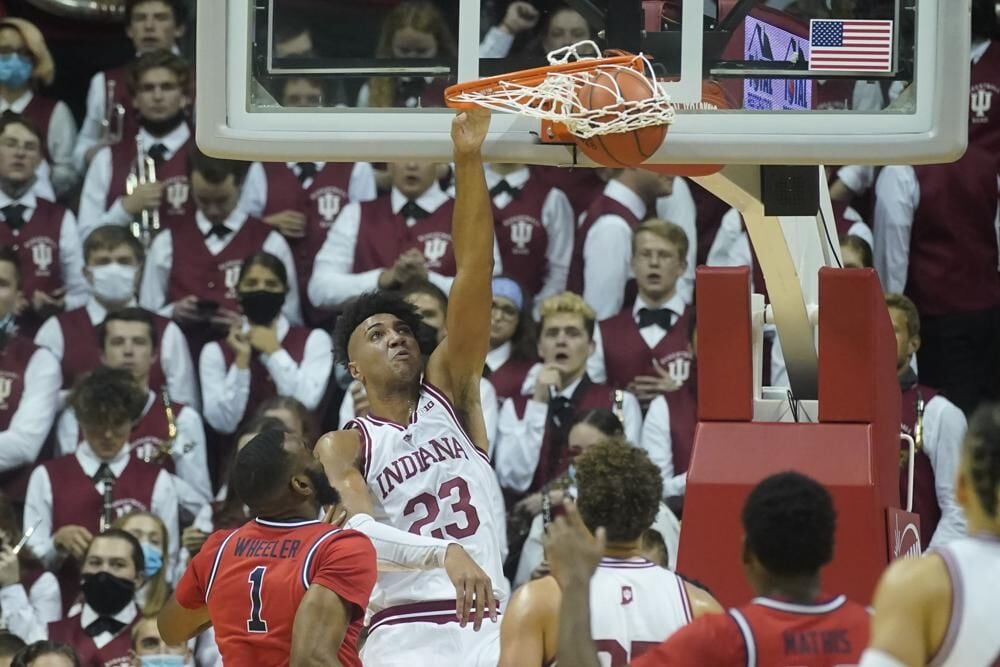 LOUISVILLE, Ky. (WDRB) — One theme from the 2021 men’s college basketball season was that last March was the first time since 1965 that Louisville, Kentucky and Indiana all missed the NCAA Tournament.

If it had not happened in 56 years, there was no way it would happen in back-to-back seasons, right?

Then Indiana blew a 22-point lead at Wisconsin. Louisville missed 18 of 19 shots during one strength of a home defeat against DePaul. On Saturday Kentucky lost to a Notre Dame team that had lost four of its first seven games.

I’ll stand by my belief that at least one local team will make the 2022 NCAA Tournament. But the events of the last seven days make it necessary to take a snapshot of where the Cardinals, Wildcats and Hoosiers sit at the quarter-pole of this season.

Worst Loss: At home to No, 119 Furman, which has been beaten by Navy and Winthrop.

Biggest Strength: Defensive efficiency. The Cards rank No. 12 nationally in that category, allowing 89.6 points per 100 possessions. That is NCAA Tournament quality defense.

Biggest Question: Three-point shooting. The Cards have made 29.3% of their shots from distance, which ranks No. 292 in the nation. U of L has made less than 26% percent of its attempts in five of nine games. That is not NCAA Tournament quality shooting.

Best Player: Malik Williams. The senior leader is second on the team in scoring (10.4) while leading the Cardinals in rebounding (9.7), blocks (7) and steals (16).

Key Player: Jae’Lyn Withers. His transition to playing on the perimeter has hit a speed bump. After averaging 8.2 points in U of L’s first five games, Withers has averaged 3.8 in the last four. Overall his scoring average has dropped from 10.0 to 6.2, his rebounding has slipped from 7.7 to 5.2 and his field goal percentage has declined .549 to .438 this season. He failed to score in the DePaul loss.

Next Game: Tuesday at 6 p.m. against Southeast Louisiana at the KFC Yum! Center.

Best Win: Ohio University, No. 104, the only team the Wildcats have beaten ranked in Pomeroy’s Top 275.

Worst Loss: Notre Dame, which lost to Boston College by 16 and stumbled against SEC bottom feeder Texas A&M on a neutral court. The Irish are 51st in KenPom.

SOS: No. 345 out of 358 teams. John Calipari should be embarrassed by this schedule.

Biggest Question: Three-point shooting. Kentucky ranks No. 271, making 30.2 percent of its attempts. That’s down from the Wildcats’ 33.6% performance last season, which Calipari pledged to fix this winter.

Best Player: Forward Oscar Tshiebwe ranks sixth in Pomeroy’s national player of the year formula. He leads the nation in offensive rebounding, grabbing a quarter of the shots Kentucky has missed. That’s incredible.

Key Player: Wing Kellan Grady. He arrived from Davidson to upgrade UK’s three-point shooting. He has, making 40% of his attempts. He leads UK with 18 three-pointers, seven more than any other Wildcat. But Grady’s usage rate is only 11.5%, which means Calipari needs to create a way for Grady to get more attempts.

Best Win: Two-point home win over No. 65 St. John’s, the only Top 100 team the Hoosiers have beaten.

Worst Loss: Two-point, double overtime loss at Syracuse, which has been beaten by Colgate, VCU and Georgetown.

Biggest Question: Turnovers. Indiana ranks No, 296 in turnover= percentage, losing the ball on more than 21 percent of its possessions.

Key Player: Xavier Johnson. He arrived from Pittsburgh to play point guard with the description that his playing style was like a Ferrari without brakes. When Johnson has attacked the basket and distributed the basketball, the Hoosiers’ offense has been formidable. When he dominates the ball and gets himself in foul trouble, IU’s offense has stalled.

Next Game: Saturday at 2:30 p.m. vs. Notre Dame in Indianapolis.