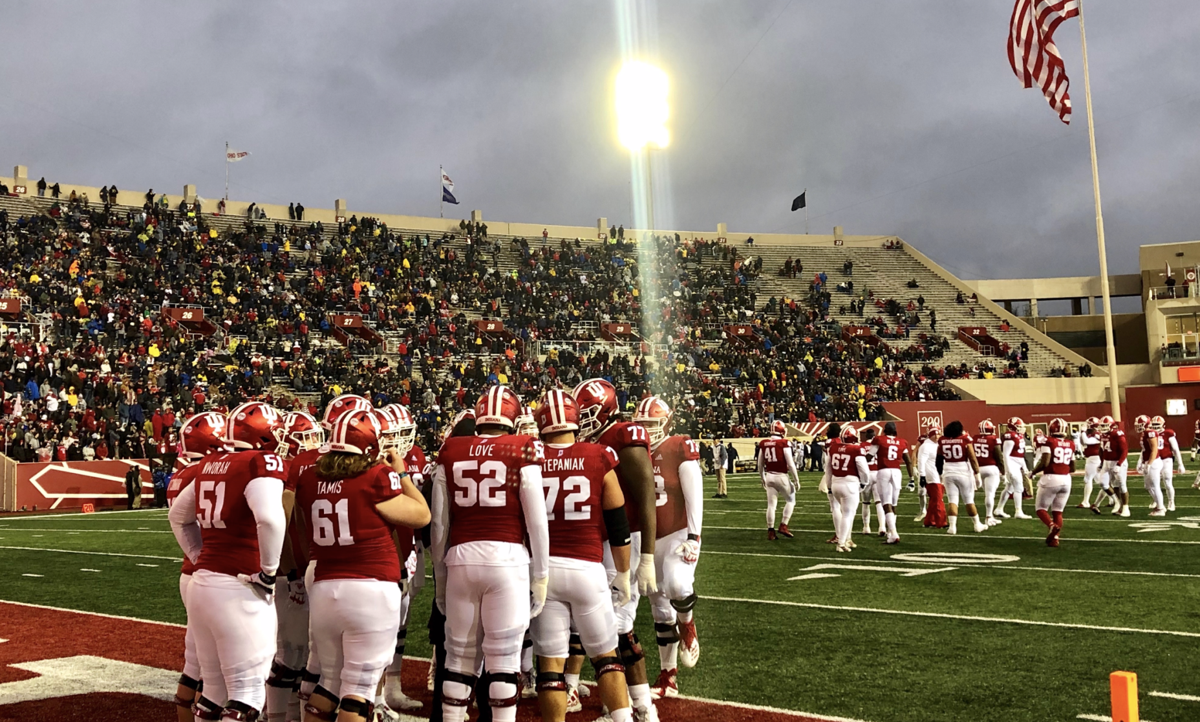 Indiana led 14-7 but the Hoosiers were buried by an avalanche of Michigan offense Saturday at Memorial Stadium in Bloomington. WDRB Photo/Aaron Matas 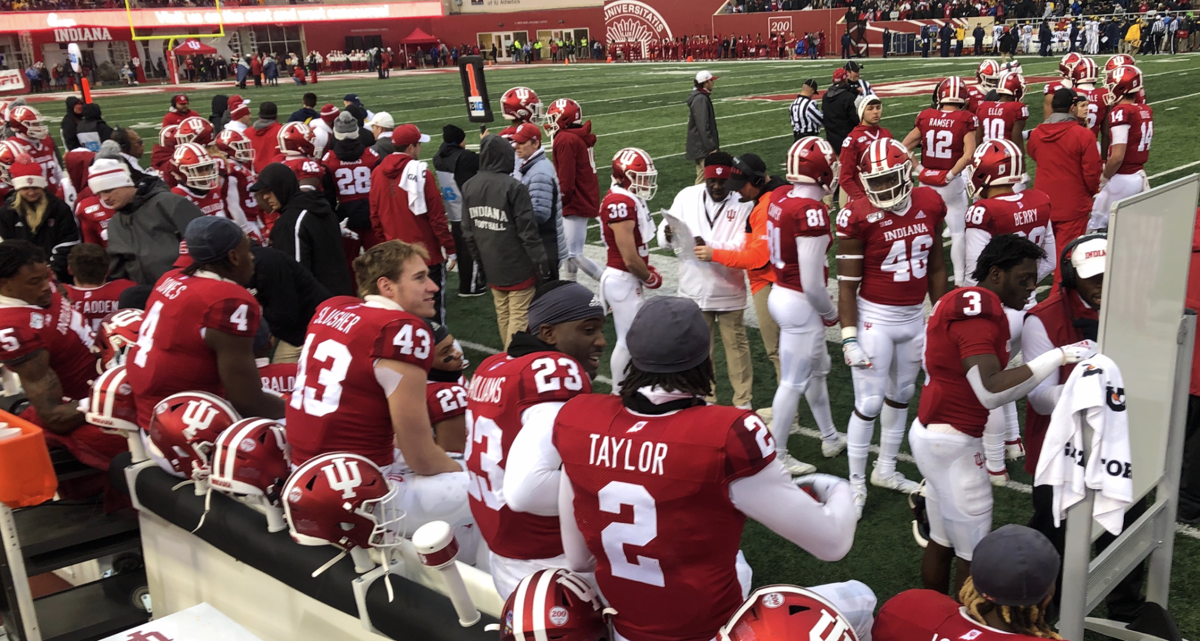 Indiana led 14-7 but the Hoosiers were buried by an avalanche of Michigan offense Saturday at Memorial Stadium in Bloomington. WDRB Photo/Aaron Matas

BLOOMINGTON, Ind. (WDRB) — I was going to begin this column by making a list of what the Indiana football team had to do to defeat Michigan Saturday.

Then I realized I had a problem:

I couldn’t tell you what Indiana had to do to defeat the Wolverines. Over the last four-plus decades, I’ve covered maybe a dozen IU-Michigan games and watched at least a dozen more on television.

Still haven’t seen an IU victory. Has anybody reading this column seen the script flipped?

Michigan 39, Indiana 14 was the final score in damp, gloomy Memorial Stadium where it rained and snowed and a blizzard of Wolverines’ offense whipped through the remodeled facility.

"I was very blunt (to his players after the game)," IU coach Tom Allen said. "This is not what we wanted. Now, how are you going to respond?

That means beating Purdue and coach Jeff Brohm on the road next Saturday. If I could not tell you what Indiana needed to do to beat Michigan, I can say that putting an exclamation point on an eight-win season by beating Purdue would qualify as a superb season for a program that won five games the last two years.

Would eight wins and toting the Bucket back to Bloomington qualify as a good season?

"I think so," IU quarterback Peyton Ramsey said. "If you look at it that way, it would be good if we could go out with a win."

This wasn’t the Michigan team that started the season huffing and puffing past Army and losing big to Wisconsin.

This was the Michigan team that just finished beating Notre Dame, Maryland and Michigan State by a combined 96 points — and believes it can ruin Ohio State’s unbeaten season next Saturday in Ann Arbor.

As they showed against Michigan State and Penn State, the Hoosiers (7-4) are improved. They’re faster, deeper and more creative on offense. They’ve collected a few more play makers on defense, too.

But Allen still has a To Do list on his desk. The Hoosiers have not made the next move and proven themselves capable of beating one of the big four in Big Ten East Division.

They finished this season 0-4 against Michigan, Michigan State, Penn State and Ohio State. You’ve got to beat a couple of those squads to become somebody in the Big Ten. Got to.

In those four defeats, IU was outscored by an average of 20.5 points.

In seven wins, the Hoosiers' average margin was 25.1.

Not a ton of middle ground.

"We're getting closer, but we're not there yet," Allen said."We're not where we need to be depth wise."

Then the Darwinian elements of Big Ten football kicked in and Jim Harbaugh’s team scored the next 32 points. Harbaugh kept his boot on the Hoosiers all the way to the finish line.

IU scored on two of its first three possessions — and then punted on five of its next six. They were unable to rush for 100 yards, settling for 97 on 37 attempts.

"Disappointing on both sides of the ball," Allen said. "We didn't play well. A lot of it was their defensive line was dominant and gave us a lot of trouble. It was more them than us."

Michigan’s unrelenting defensive charges kept knocking the Hoosiers down — and sometimes Allen’s players needed assistance getting back up or time with the training staff to come back into the game.

Ramsey, second-team Indiana’s quarterback, got blasted in the ribs, knocked to the turf and threw an interception on IU’s second possession. Ramsey returned and led the Hoosiers to a touchdown on the next possession. But he didn’t look as sharp as Ramsey looked on the first series.

"I was a little dinged up but that's just the way it is," Ramsey said.

Receiver Whop Philyor, IU’s top big-play guy, watched the game in street clothes, stuck in concussion protocol from two hits to the head he suffered against Penn State. For a chunk of the first half, he was joined on the sidelines by Ty Fryfogle, one of his replacements.

At the end of the third quarter, IU lost left tackle Matthew Bedford and halfback Stevie Scott on the same play. Both exited, Bedford on a cart. Neither returned. Allen said he was uncertain if either would be available against Purdue.

Even in a season when the Hoosiers have already won seven games and secured bowl eligibility three weeks ago, Indiana did not have the beef to defeat Michigan — for the 24th consecutive season.

Now the Hoosiers have a more pressing assignment: Beating Brohm and improving Purdue.

Their losing streak against the Boilermakers isn’t nearly as long as their run of futility against Michigan. It’s only two games.

But Allen has yet to defeat Brohm. And the Oak Oaken Bucket game would be a memorable exclamation point for Indiana’s regular season.

Not only would it give Indiana a blast for juice for in-state recruiting tussles. It would also bump the Hoosiers up to eight victories and improve their position in the Big Ten bowl food chain.

If the Hoosiers started the season determined to return to a bowl for the first time since 2016, the wish list upgraded to a warm weather bowl (read: Florida) after IU won back-to-back-to-back-to-back games against Rutgers, Maryland, Nebraska and Northwestern.

The word from Las Vegas this week was that Indiana was listed as a 9 1/2 point road favorite for the game that will be played at Ross-Ade Stadium in West Lafayette, Ind., at noon next Saturday.

A month ago that looked like a putt in the leather for the Hoosiers. Purdue was 2-6, forced to use its third-string quarterback, a former walk-on.

Then Brohm coached the Boilermakers past Nebraska and Northwestern. He hasn’t had former Trinity receiver Rondale Moore, but the offense has kept percolating because of another receiver — freshman David Bell.

The Boilermakers lost at Wisconsin Saturday to slip to 4-7. There will be no bowl for Purdue. So beating Indiana would be Purdue's consolation prize.

Indiana has done an excellent job of winning the games it was supposed to win while losing the games they were likely to lose. It won’t be easy completing that pattern at Purdue next Saturday. But it will matter.