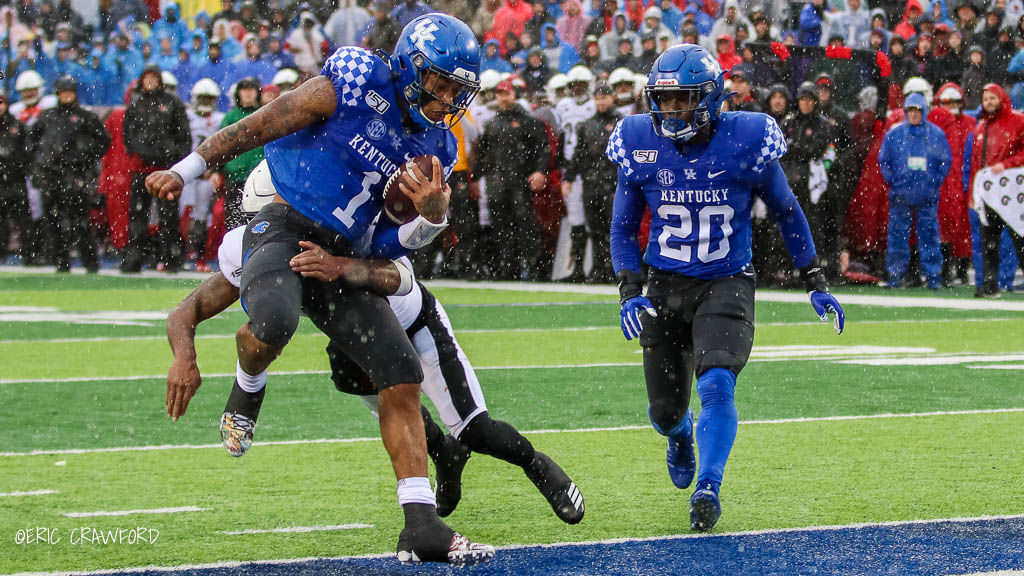 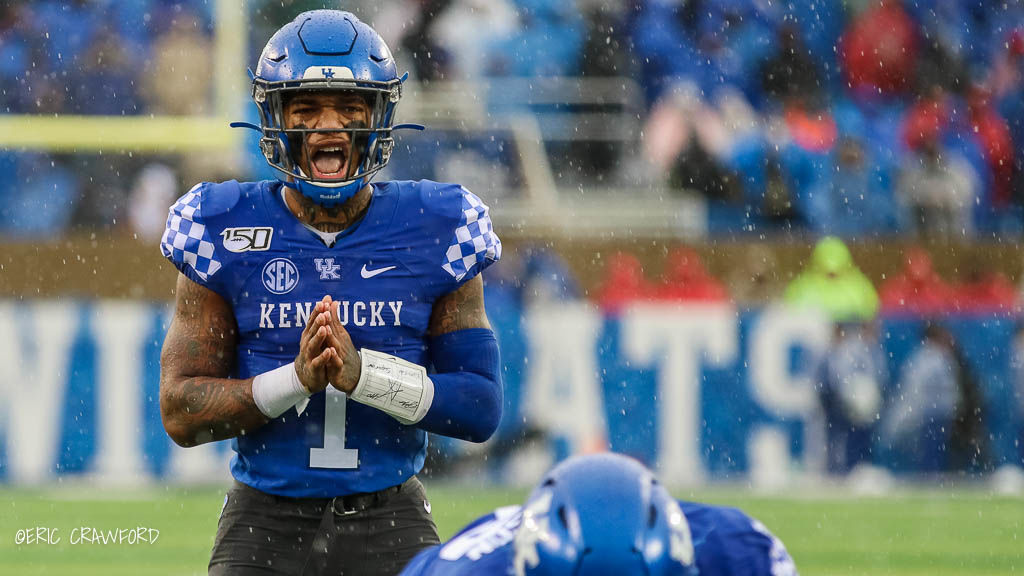 There was Scott Satterfield and the dazzling coaching job that he did transforming Louisville from a team that couldn’t beat anybody to team that was a threat whenever they tightened their cleats.

There was also the story of Lynn Bowden Jr. All he did was put his promising professional future as a receiver/return specialist on hold to rescue the Kentucky football team by shifting to quarterback — and playing the position with fearsome confidence.

After you wiped your brow, removed your soaked shoes and studied the soggy scoreboard at Kroger Field Saturday, you saw how the college football story in the commonwealth will be remembered for 2019.

Kentucky and Bowden 45, Louisville and Satterfield 13. Credit Bowden with four touchdowns and 284 yards rushing, the third-best total in FBS this season. Nobody in the Southeastern Conference ran for more yards.

Bowden played with an edge that he carried into his post-game interaction when he said that Louisville, not Tennessee, was Kentucky's primary rival.

"(Louisville) was playing much better so it felt more complete (than last season)," UK coach Mark Stoops said. "It felt, you know, very satisfying to physically do that."

Both teams finished 7-5 but the edge goes to Kentucky for walking off with the Governor's Cup for the second consecutive season.

Kentucky’s punishing, you-know-it’s-coming running game, featuring Bowden as the maestro, was more than Louisville could handle. The Wildcats ran the ball on 40 of their 42 snaps, rolling to 517 yards and six touchdowns.

The Wildcats spotted the Cardinals the opening touchdown and then delivered a relentless serving of ground and pound football, delivering their third consecutive 400-yard rushing performance.

Give Bowden the Howard Schnellenberger Award, which is presented to the player of the game by the Louisville Sports Commission.

He earned it — just as he earned the admiration of his teammates and coaching staff by embracing the shift from receiver to quarterback after the Wildcats lost Terry Wilson and Sawyer Smith to injuries.

Bowden earned it by directing the Kentucky offense with poise and precision.

He earned it by playing the final 20 or so minutes with a tender ankle that forced him to hobble off the field with 6:33 left in the third quarter.

He also made certain to provide several plays guaranteed to make their way to the national highlights shows.

"In our business, if you are going to be an Alpha dog, then you be an Alpha dog and that's him," Stoops said. "When you do that time and time again and prove it and put the team on your back and say, 'Let's ride; let's do this,' you know, it's remarkable."

"You've just got to give them credit," U of L linebacker Dorian Etheridge said. "They have a really good running game. They blocked extremely well. We just didn't tackle well as a defense and that cost us."

This is the one that I’d credit as a knockout moment: Bowden took the second snap of the third quarter and took off around the left end.

He read his blocks carefully, waiting for openings to unfold. He raced toward the left corner of the end zone. When a Louisville defender was primed to overtake him, Bowden shook free and then twisted his body back to the center of the field. More open space. And a touchdown.

That washed away the momentum that Louisville thought it had generated by scoring on the final drive of the first half — and pushed Kentucky ahead, 24-13.

Bowden was not finished. He did it again about 12 1/2 minutes later, crackling 46 yards through a crease on the left side for another score.

"Maybe the best I've ever seen (running the ball) right there, at that position, doing what he was doing," UK offensive coordinator Eddie Gran said. "It was incredible. I told him that after. Really, really pretty awesome."

Ball game. That made it 31-13 Kentucky — and the Wildcats quickly added another touchdown, this one an explosive 64-yard run by Christopher Rodriguez.

With the rain and Kentucky’s ability to run the ball to control the clock and tempo, the Cards were in legitimate trouble.

"They were really big up front," U of L offensive tackle Mekhi Becton said. "That nose guard was making a whole lot of trouble this game. I feel like that affected us the most."

Here is the thing about what Bowden did for Kentucky after he switched to full-time quarterback in the Wildcats’ sixth game:

Bowden succeeded when everybody in the building knew that he was not going to throw the football — especially in a chilly, persistent rain.

In the first half, Bowden threw one pass.

He completed it because you’re supposed to complete a four-yard pass.

In the second half, Bowden threw one more, a run-it up attempt with Kentucky ahead by 25 points and less than eight minutes to play.

Incomplete. Nobody said Bowden was perfect.

And that was it. The Wildcats delivered two touchdowns and field goal by running the ball 24 times for 201 yards in the first half.

They hung 17 points in between the touchdowns that Louisville scored on a 33-yard pass from Micale Cunningham to Tutu Atwell on its opening drive and 56-yard run by Javian Hawkins in the final 19 seconds of the second quarter.

The second half was all Kentucky.

Both teams are bowl eligible. Both await their bowl assignments, more excited about a chance to play a 13th game in Florida than in a location that would require gloves and jackets.

Something more enchanting than the Music City Bowl in Nashville for Louisville or the Liberty Bowl in Memphis for Kentucky.

But that will be a discussion for the rest of the week. On Saturday, the focus belonged on Kentucky and Lynn Bowden.