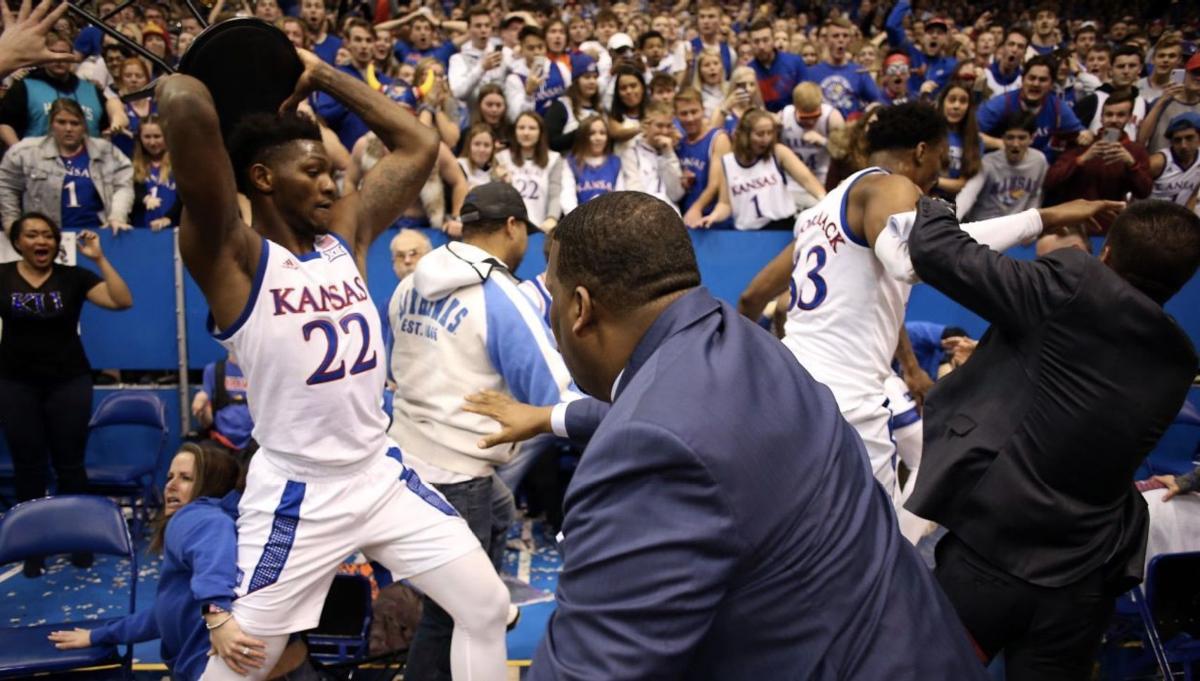 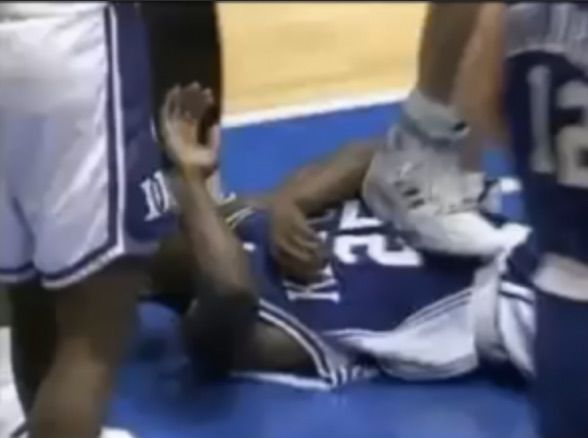 Duke forward Christian Laettner got away with stepping on Kentucky's Aminu Timberlake in 1992 before the advent of replay review.

Duke forward Christian Laettner got away with stepping on Kentucky's Aminu Timberlake in 1992 before the advent of replay review.

LOUISVILLE, Ky. (WDRB) -- In a season where the game has been sentenced to the In Other News segment of national sports programming, college basketball forced people to give it more than a shrug Tuesday night.

And the game stirred up its annual reminder of the Duke national championship that should not have been.

Credit Dollar Bill Self and the Kansas Jayhawks.

Save any leftover applause for Bruce "I Saw Nothing," Weber of the Kansas State Wildcats, the faux tough guys from Illinois and Walter McCarty's awful but inevitable firing at Evansville.

As you likely saw, Kansas and Kansas State delivered a game-ending brawl that appeared scripted by Vince McMahon to sell his next WWE pay-per-view.

I'll stop there and promise to get back to the Lawrence Love Fest. But the good citizens of Kansas weren't the only ones who lost their minds Tuesday.

The luckiest player in America was Illinois guard Alan Griffin because Kansas and Kansas State stole all of Griffin's air time.

Griffin wears number 0, which is entirely fitting because during Illinois' game at Purdue Tuesday Griffin showed he has zero understanding there are cameras everywhere in every big-time college basketball arena.

You didn't need Eliot Ness to find evidence that Griffin used his left foot to stomp on the chest of Purdue guard Sasha Stefanovic with about 12 minutes to play.

The officials went to the monitor and Griffin got part of what he deserved -- an immediate ejection.

This will be the first major disciplinary call for new Big Ten commissioner Kevin Warren, Anything less than an eight-game suspension will be a whiff.

Three for the cheap shot and five more for stupidity.

This is a perfect time to wonder how dramatically the history of college basketball would have been changed if replay reviews existed in 1992 -- or if game officials Tim Higgins, Charles Range and Tom Clark had the courage to do the right thing on March 28, 1992 at The Spectrum in Philadelphia.

That remains the primary reason that Duke coach Mike Krzyzewski and the Blue Devils were cleared to defeat Kentucky 104-103 in overtime. That victory was a critical step in Duke winning back-to-back NCAA titles and setting itself up as the Go-To program for the 5-star recruits who have enabled Coach K to win five championships.

You remember the scene: Duke poster boy Christian Laettner stepped on Kentucky’s Aminu Timberlake as vigorously as Griffin stepped on Stefanovic — and got away with it.

Coach K could have sat Laettner. He played him 43 of 45 minutes.

All Laettner got was coast-to-coast adulation (and a spot on the U.S. Olympic team) for making 10 of 10 field goal attempts and 10 of 10 free throws as the Blue Devils escaped the Wildcats to win the East Regional.

The NCAA didn't give Duke an asterisk. But every time I see another chump step on another player on the ground, I think of a national title that Coach K, Laettner and the Blue Devils should not have won.

This week we'll discover if Illinois, Kansas and Kansas State do the right things and punish the Eagle Scouts on their teams.

After the Kansas-Kansas State dust-up, Self did a better job than Weber of expressing what an awful moment it was for college basketball.

Within 10 minutes of the brawl, anybody with a social media account saw every ridiculous move made by Silvio De Sousa and David McCormick of Kansas and DaJuan Gordon and James Love of Kansas State.

Not Weber. He must still use a flip phone.

I'll give him credit for saying that it was his guys and his fault for igniting the situation because Gordon stole the ball from De Souza instead of letting the clock run out as he was instructed to do.

But then Weber air-balled by adding, "It created, I guess, a bad thing."

Self talked tougher and acted tougher by sharply criticizing his players after the game and then placing De Souza on an indefinite suspension Wednesday.

Hold the applause. This is the same Kansas program that has repeatedly thumbed its nose at the NCAA with its reaction to the Jayhawks' role in the pay-for-play scandal.

It's a short trip from that mindset to players picking up chairs and threatening to clobber the opposing team or stomping on somebody on the ground in the handicap seating area.

But that is where Kansas and college basketball found itself Tuesday night. It's not the way you want to move to the top of the newscast.