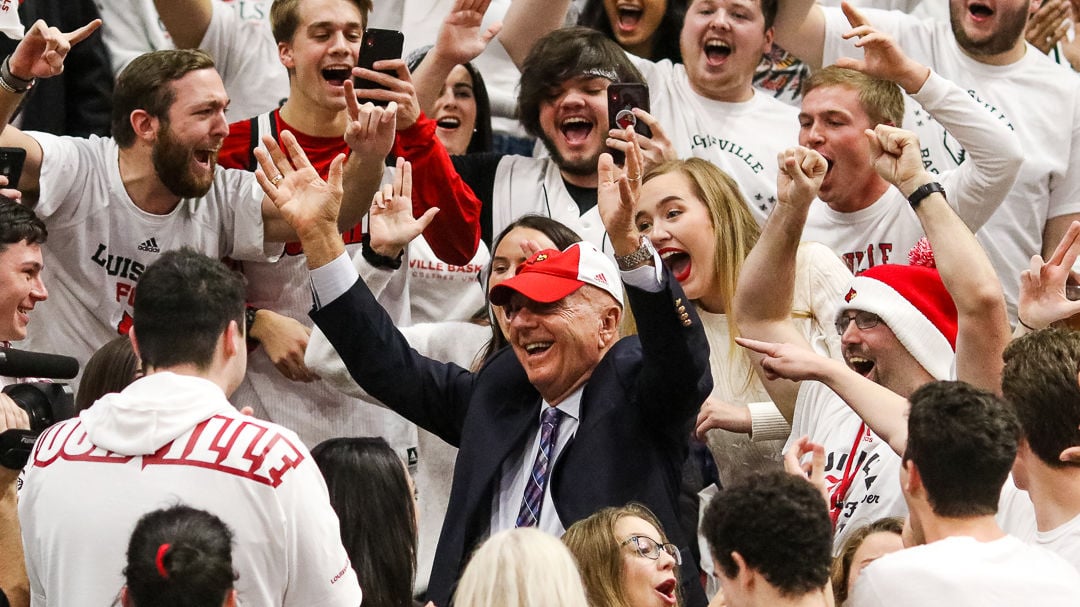 Louisville basketball fans cheer with Dick Vitale before a White-Out win over Michigan. 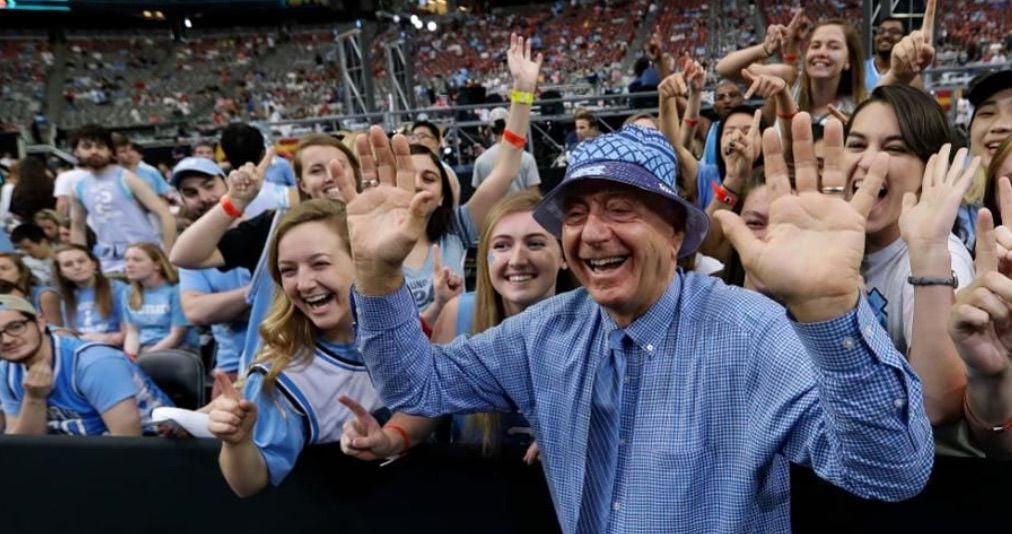 ESPN basketball analyst Dick Vitale has always been a people person but he said he will need to all-clear from Dr. Anthony Fauci to return to an arena.

Louisville basketball fans cheer with Dick Vitale before a White-Out win over Michigan.

ESPN basketball analyst Dick Vitale has always been a people person but he said he will need to all-clear from Dr. Anthony Fauci to return to an arena.

LOUISVILLE, Ky. (WDRB) -- When Dick Vitale works a basketball game for ESPN, he does more than work through the matchups.

Vitale works the entire arena. Nobody stops to take more pictures, sign more autographs or answer more questions. To follow Vitale through his pre-game routine is to watch a guy who makes friends with the pep band, the players, the security guards, the media, the coaches, the production crew and anybody interested in shaking his hand.

Social distance has never been the Dick Vitale way.

In a week when Vitale would be preparing to fly to Atlanta to work the NCAA Final Four for ESPN’s international television broadcast, he has remained at his home in Sarasota, Florida, following the rules we have been asked to follow to combat the novel coronavirus, COVID-19.

I asked Vitale when he will to an arena or stadium.

“Only when Dr. (Anthony) Fauci tells me it’s safe,” Vitale said. “I’m really concerned. Obviously, I don’t think anybody is going to open up a stadium and let people come in unless there is definite, definite proof, beyond a doubt (that it’s safe).

“I know I wouldn’t go. I’ll be honest with you, right now, as much as I love sports, whether it would be a basketball arena, a football stadium or a baseball stadium, I’m not going to go unless I hear Dr. Fauci or somebody of that character and quality, say it is safe as can be.

“If there is any doubt, are you going to put your body out there with thousands of people?”

“I don’t think so,” Vitale said. “No way. That’s what I’m saying. I wonder when this is going to be cleared. When I hear the numbers, they just blow me away.

“So I’m doing all the things that everybody does with all the social distancing and washing hands multiple times. I’m taking this very serious.”

Fauci, an immunologist who serves as the director of the Institute of Allergy and Infectious Disease, has become the must-get interview of this crisis.

When Golden State Warriors star Stephen Curry landed Fauci for a Q&A on Instagram, even former President Barack Obama watched and commented. Word has spread that Fauci, 79, learned to lead as a former high school and small college point guard.

Relentlessly optimistic, Vitale has tried to play his part. Every spring, Vitale and his wife, Lorraine, host a fundraiser for the V Foundation that raises millions in a determined fight against pediatric cancer. The date for the 2020 event was changed from May 8 to Sept. 4 — the revised Kentucky Derby weekend. The goal has not changed:

The Vitales intend to raise $5 million.

You can contribute at DickVitale.com. Vitale also said that 100% of the money from the merchandise that he sells will be given to the cause. Last year, the event generated $4.3 million.

“The one thing that I would recommend, especially to senior citizens, or even if you’re younger, it doesn’t matter, is exercise,” Vitale said. “It builds up your immune system. I do a minimum of one hour every day.”

How does a people person like Vitale deal with social distancing?

He said that he takes long walks and works with light weights at home. Lots of reading. He planned a tennis singles match for Tuesday. Although Vitale often plays doubles, it’s strictly singles now.

“Just to get out and keep your mind sharp and your body sharp,” he said. “It’s important that you don’t let yourself get to where you’re not challenging your mind. You’ve gotta do that.

“I’m trying to learn things on social media that I don’t know. Like this Zoom (video conferencing app) this week ... I’d never used it. I just feel like you’ve got to do little things to keep yourself active.”

If you follow Vitale on his social media platforms, you know that he picked Michigan State, Gonzaga, Florida State and Seton Hall to advance to the Final Four.

You also know that nearly every morning, you could find him at the Another Broken Egg Cafe, his favorite breakfast spot, in southwestern Florida. It’s closed.

So the Vitales have committed to ordering pick-up meals twice a day to support local restaurants.

“I really know it’s a tough time for a lot of people,” he said. “The restaurants are struggling like crazy. We’ve all got to help each other.

“You’ve got to have faith and believe his thing is going to get settled.”

As it waits for state approval, Kentucky Kingdom says it needs 3 weeks' notice to prepare

No injuries reported after fire at New Albany strip mall