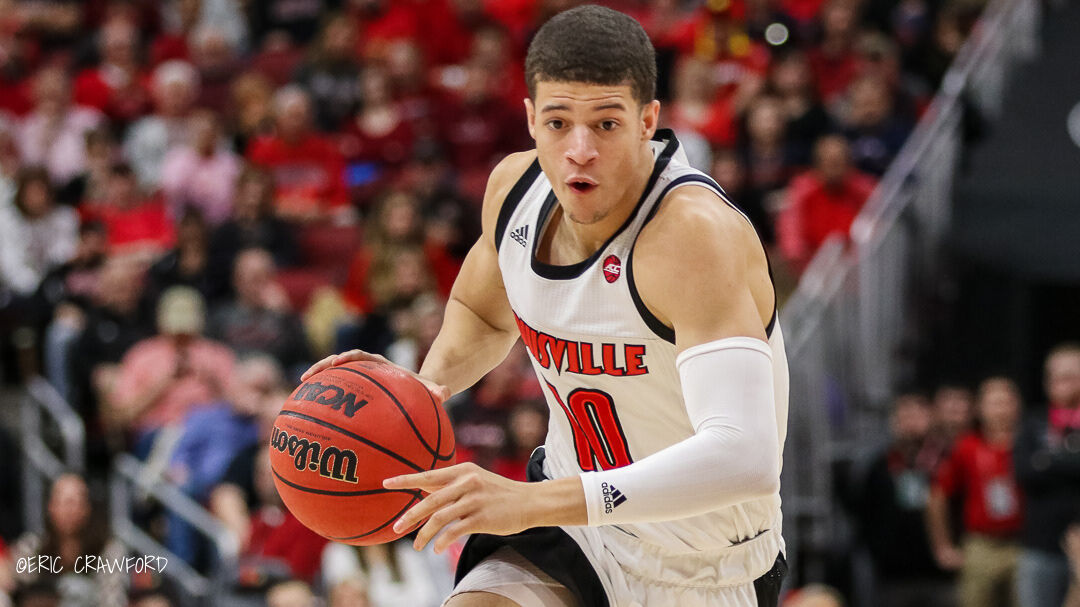 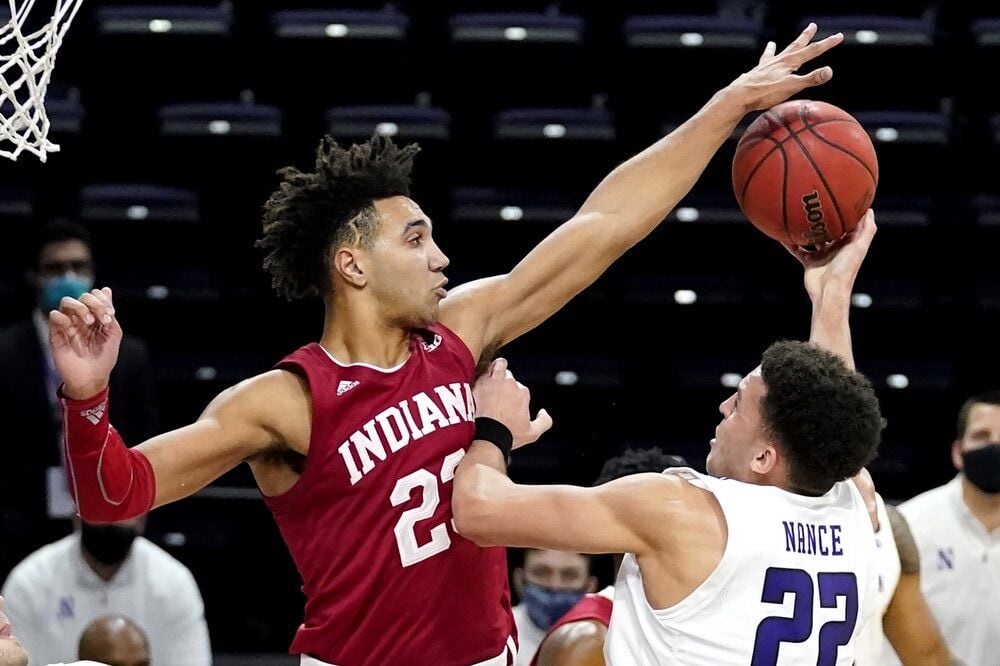 LOUISVILLE, Ky. (WDRB) -- Before the calendar tilts to all football, all the time, there’s always time for basketball talk.

The NBA Summer League ended. The college basketball preseason magazines will arrive by the end of the month. Recruiting never stops.

Let’s step behind the three-point line and take a shot before the shot clock expires.

*Louisville, Kentucky and Indiana will return to the NCAA Tournament.

Fingers remain crossed that we never endure a March as uninspiring as the last two have been on the local basketball scene. Because of COVID-19 and inept performances, there has not been an NCAA Tournament win on the local calendar since ...

Multiple outlets project a return to the NCAA Tournament by Louisville, Kentucky and Indiana.

I’ll begin with the guys at the Three-Man Weave, a popular website and podcast. They’re counting down their top-40 teams in the nation. Louisville (No. 21) and Indiana (No. 20) made the cut — ahead of Virginia (No. 23) and Arkansas (No. 24). No word on Kentucky, but only because the countdown has just reached No. 16 (Houston).

Next up, LouisvilleAmid all the off the court noise this offseason, Chris Mack has assembled a deep and versatile roster - can the Cards put last year's debacle in the rear view?https://t.co/fRbDdBAuAP

I’d encourage you to read the entire U of L preview, but here is their synopsis of the Cards:

“The 2021-22 season represents a blank canvas. There’s plenty to nitpick at here, from off court distractions to volatile on floor production. The mitigating factor and potential antidote to all these concerns? Depth. Mack’s best teams have always leaned on a strong bench, which was essentially non-existent last season. Guys like Michael James, JJ Traynor and Sydney Curry may be stuck at the back of the line to start the year, but they have the chops to break into the core rotation - and that doesn’t even include Mason Faulkner, a recent Western Carolina defector who has apparently already enrolled at the school.

“It all comes down to Mack’s ability to harness this roster optionality as an asset. If successful, the Cardinals have top-10 upside.”

Indiana delivered a pair of double-figure wins over BC Mega of Serbia last weekend in the Bahamas. The Hoosiers were ranked one spot ahead of Louisville. Three-Man Weave identified the starting lineup that Mike Woodson used in Nassau: Trayce Jackson-Davis and Race Thompson in the front court; Northwestern transfer Miller Kopp on the wing; and former Pitt guards Xavier Johnson and Parker Stewart in the backcourt.

Checking in at number 20 on our Top 40 countdown are the Hoo Hoo Hoosiers of @IndianaMBB! Mike Woodson looks to make the Dance and compete near the top of the Big Ten in his first season as head coach in Bloomington… https://t.co/MI9qhZ9KYc

Although Michigan, Purdue, Ohio State, Illinois and Michigan State are likely to be picked ahead of the Hoosiers in the preseason forecasts, the guys at Three-Man Weave are believers in Woodson and Indiana’s returning players.

Here is their synopsis on the Hoosiers:

“Indiana has the talent to win the Big Ten next season, but it will come down to Woodson’s ability to transition from the NBA to the college ranks, and his team’s ability to adjust to his style of play, defend, and shoot the ball. I’m a believer in Woodson this season; the Hoosiers should enjoy their best year since Tom Crean’s 2016 Sweet Sixteen squad and compete for a top seed in March.”

*In other preseason forecasts, Bart Torvik’s power formula is not as bullish on the Wildcats (link to Torvik rankings).

They are No. 17, one spot behind St. Bonaventure as well as third in the Southeastern Conference, behind Alabama (No. 12) and Tennessee (No. 15).

The other local rankings, according to Torvik’s formula:

Lunardi has Kentucky winning the Southeastern Conference while earning a 3-seed. He also gives Duke, his projected winner of the Atlantic Coast Conference, a 3-seed, while making Louisville a 7-seed.

Both the SEC and ACC champs failing to earn 2-seeds? Hmm.

Lunardi put a trio of Big Ten teams (Purdue, Michigan and Illinois) as 2-seeds, with Indiana a 9-seed.

*Finally, Gary Parrish of CBS Sports updated his Top 25 and 1 rankings after Penny Hardaway pulled off the coup of the summer by landing Jalen Duren, the top-ranked recruit in the Class of 2022 who will skip his senior year of high school to play for the Tigers (Link to Parrish's poll).

Kentucky was the only local team to make Parrish’s list. The Wildcats are No. 13, behind Arkansas (No. 9) and Alabama (No. 11) in the SEC.

On Thursday morning, Jerry Palm of CBSSports shared his 2022 NCAA bracket. It featured Louisville as a 12-seed with a play-in game against Brigham Young, Indiana as 7-seed and Kentucky, like Duke, a 2-seed. Palm also put Eastern Kentucky in the field as a 14-seed. (Link to Palm's bracket.)

Palm and Lunardi had the same four teams atop their brackets: Gonzaga, UCLA, Texas and Kansas.

Tyrese Maxey, Sixers: The former UK guard played in a pair of games but ranked second (to Cam Thomas of LSU) in scoring at 26 points per game.

Jordan Nwora, Bucks: Weeks after he won an NBA championship with Giannis Antetokounmpo, Nwora reported to Las Vegas and averaged 20.3 points in four games, although he shot less than 18% from distance. The Bucks remain high on the former U of L forward.

Immanuel Quickley, Knicks: The New York coaching staff loves the energy that the former UK guard provides, and he did it again in Las Vegas, averaging 20.2 points and more than two three-point field goals per game.

Carlik Jones, Mavericks: The former U of L point guard had a 21-point game for Dallas, finishing the summer league averaging 14.2 points, 3.6 assists and three rebounds.

David Johnson, Raptors: Toronto is rebuilding its roster, so Johnson should have an opportunity to earn minutes next season. He dealt with injuries prior to the draft. In three games in Las Vegas, Johnson, a product of U of L and Trinity High School averaged 16 minutes and 5.7, while shooting less than 30%.

Jay Scrubb, Clippers: The former Trinity star performed primarily in the G-League last season but looks primed for a larger role in Los Angeles. Scrubb averaged 11.6 in nearly 29 minutes of action but must improve his 31.8% field goal percentage.