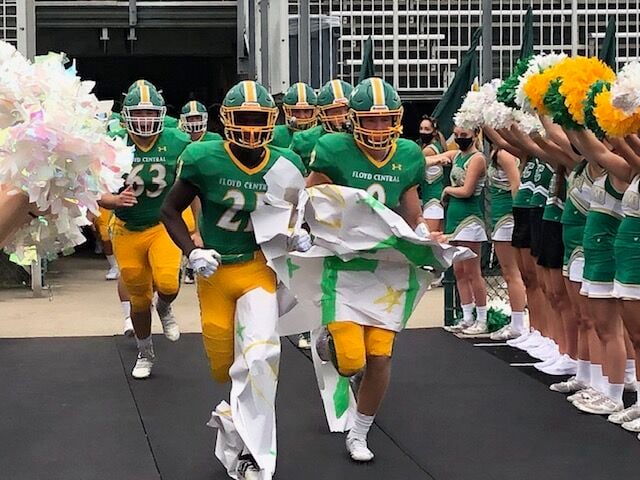 Floyd Central football players ran onto the field prior to the Highlanders' game against Jeffersonville Friday night. 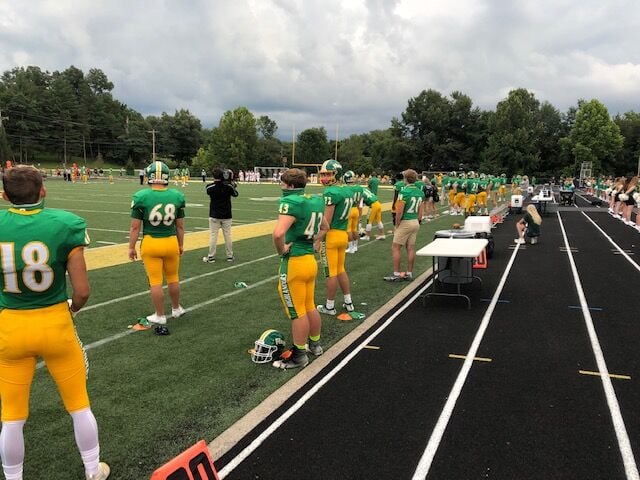 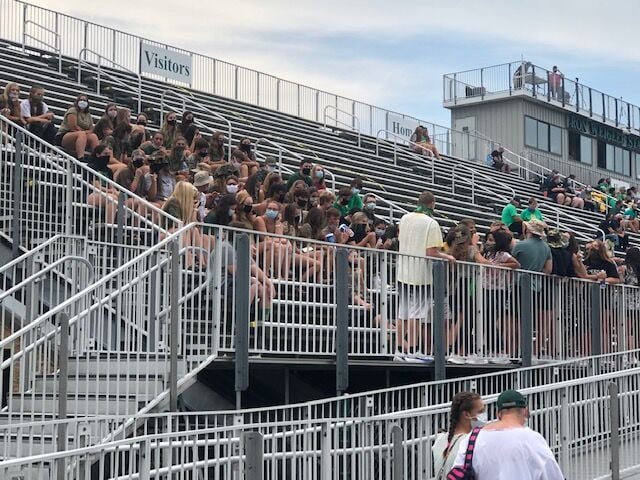 The Floyd Central students had to be instructed to spread out prior to FC's game with Jeffersonville Friday night. 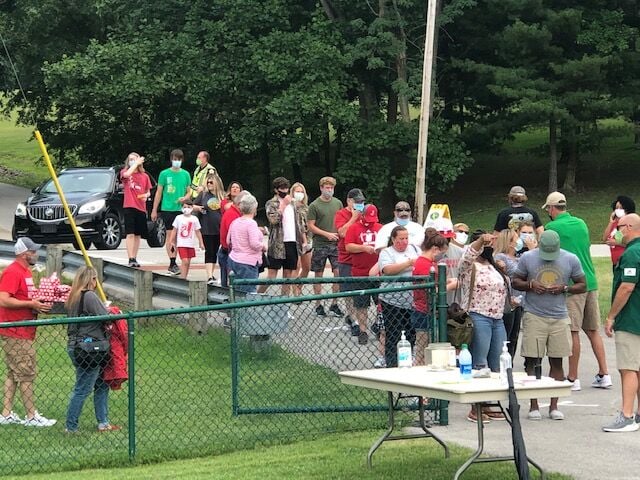 Fans from Floyd Central and Jeffersonville lined up to attend the opening game of the Southern Indiana high school season Friday night. 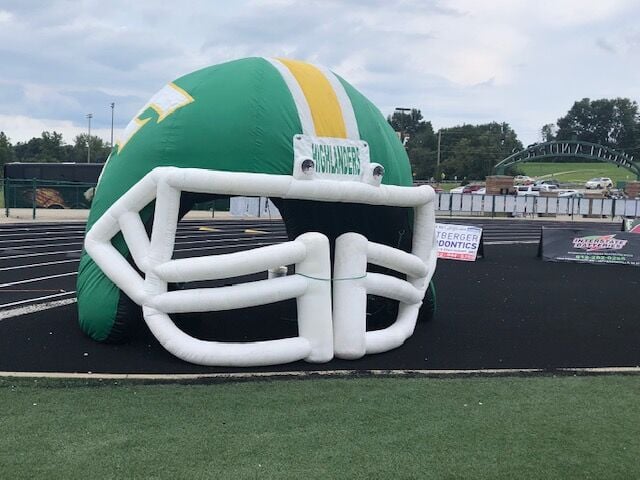 The inflated helmet signaled the start of the high school football season at Floyd Central. 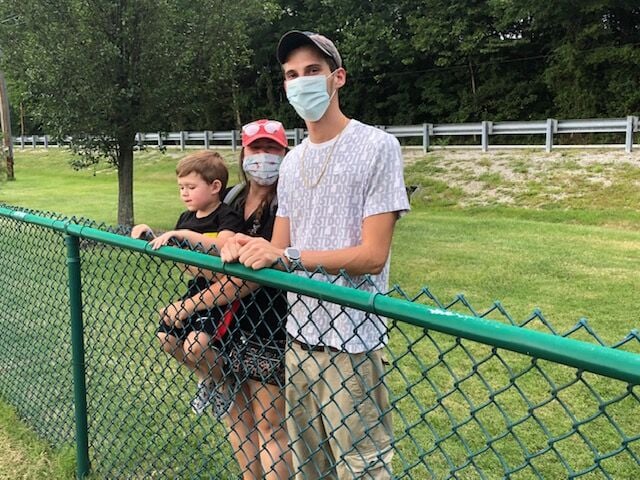 Nathan Lucas (right), Shanda Bowers and her son Axel, watched the Floyd Central-Jeff game from outside the stadium Friday night because they were not able to purchase one of the 1,000 tickets. They wanted to support a player who lives in their apartment complex.

Floyd Central football players ran onto the field prior to the Highlanders' game against Jeffersonville Friday night.

The Floyd Central students had to be instructed to spread out prior to FC's game with Jeffersonville Friday night.

Fans from Floyd Central and Jeffersonville lined up to attend the opening game of the Southern Indiana high school season Friday night.

The inflated helmet signaled the start of the high school football season at Floyd Central.

Nathan Lucas (right), Shanda Bowers and her son Axel, watched the Floyd Central-Jeff game from outside the stadium Friday night because they were not able to purchase one of the 1,000 tickets. They wanted to support a player who lives in their apartment complex.

FLOYDS KNOBS, Ind. (WDRB) — Floyd Central intends to prove it has the best high school football team in southern Indiana this season, and the Highlanders needed less than 12 minutes to hang two touchdowns on Jeffersonville on Friday night.

Jeff Cerqueira, the school’s athletic director, locked his protective eyes on the entire surreal scene. After Floyd Central’s second touchdown, Cerqueira walked urgently from his spot in the end zone, past the bleachers, through the chain-link fence gate, across the track and onto the Floyd Central sidelines.

A knot of six players were huddled shoulder-to-shoulder, enjoying the Highlanders' explosive start.

"You’ve got to spread out and stay on your spots, fellas," Cerqueira said.

Welcome to high school football in 2020. Even the celebrating must be managed.

Players can be nose-to-nose along the line of scrimmage, but orange cones were placed 6 feet apart on the sidelines to maintain social distance wherever possible.

"We’ve worked so hard to get to this point," Cerqueira said. "Everybody has been great. We’re trying to follow the rules. But we need to keep it going."

Nine states, including California, North Carolina and Virginia, bumped the start of their high school football seasons to January 2021 or later because of the novel coronavirus.

They fear the health risks outnumber the athletic and social benefits that the return of high school football can stir. Maybe they read the story about the five people who died from COVID-19 after attending a high school basketball sectional in Indianapolis last March.

Utah plunged ahead as the first state in America with prep football last week. Indiana joined Alabama, Tennessee and three other states with blocking and tackling this weekend. Kentucky and other states remain in a holding pattern.

Fans will be checking scores, and critics will check COVID-19 case numbers.

In a world where four major college football conferences have have canceled their seasons and sporting events like the Kentucky Derby and Indianapolis 500 will proceed without fans, Indiana’s decision to play on has inspired debate, watchful eyes and coaching.

Lots and lots of coaching — and not just the coaching of blocking and tackling.

Players must be coached to stand next to their designated cones, 6 feet apart on the sidelines. It’s not instinctual. It’s not the way guys grew up playing the game. But it’s the way it needs to be.

Students have to be directed not to sit in consecutive rows. They needed a pregame reminder on the public address system before they separated at Floyd Central.

Fans have to be coached not to remove their masks unless they were eating or drinking. Then, after a lightning delay at the end of the first quarter, they had to be coached into walking back to their cars.

"People are looking for some normalcy to return to their lives," Floyd Central coach James Bragg said. "This time of year, what’s more normal than high school football?"

Was there a hunger for football?

You bet. Nathan Lucas, his friend, Shanda Bower and her son, Axel Bowers, drove from Jeffersonville to Floyds Knobs, knowing no tickets were available.

They wore masks and stood outside a fence behind the Jeffersonville bleachers so they could support Melo Herthel, a Jeff tight end who lives in their apartment complex.

"We’ll stay to ourselves," he added. "We bought snacks before we came to make sure we didn’t have to go to the concessions."

People are watching, taking notes and choosing sides. I posted a string of pictures from Floyd Central on social media Friday night.

The comments were close to what I expected. Some celebrated football’s return. Others questioned why many fans were not socially distanced. One person requested a score update. Another opined that that "Andy (Beshear, Kentucky’s governor) would not be pleased," by the pictures of the crowd.

Floyd Central’s football stadium has room for about 4,000 fans. Cerqueira said the Highlanders typically open their season against Louisville Male and the stadium is packed.

Only 1,000 fans were allowed Friday night — about 1,500 fewer than attended the Jeff-FC games last season. They entered through two gates at opposite ends of the facility.

Hand sanitizer was available on tables in multiple locations. Portable toilets were placed near the visiting bleachers. The public address announcer made the request for masks and six-feet of social distancing about every 20 minutes before the game — and throughout the first quarter.

You know how that goes. Some people do not need to be reminded. Some forget the recommendations. And some don’t want to hear it.

I talked to a half-dozen fans. None were concerned they were putting themselves at risk for contracting the virus. No surprise. If you were concerned, you’d stay home.

Football players want to play. Their preseason practices were limited in July, and they did not put on pads until Aug. 4.

Others were also affected. Cheerleaders want to cheer. And band members want to perform. Their summer competitions were also wiped from the calendar by the pandemic.

A string of fans cheered the Floyd Central band as they marched down the hill from the school to the football stadium before the game.

Lee Young’s son, Michael, plays the baritone in the Floyd Central band. A father could not miss this.

"We’re pretty pumped because we weren’t really sure it was going to happen," Lee Young said. "All the off and on. You know how that goes … at least we’ll get one game in."

Any apprehension about proceeding during the pandemic?

"We were (apprehensive) at first but after seeing how everybody kind of spread out and they limited the numbers and the masks, I feel pretty safe," Young said. "As safe as you can be, I guess.

"You have to go out at some point and try to be as safe as you can. But you’ve got to get out. You can’t just stay inside all the time."