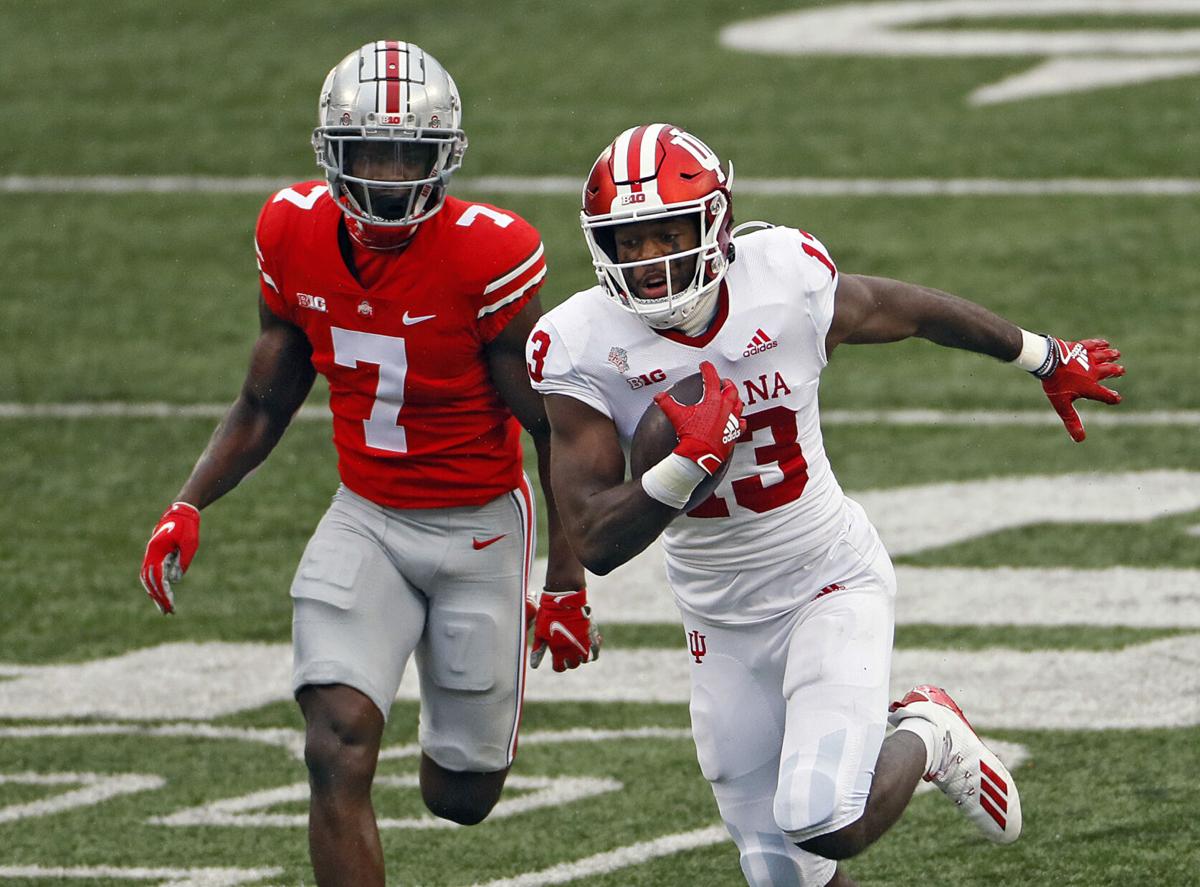 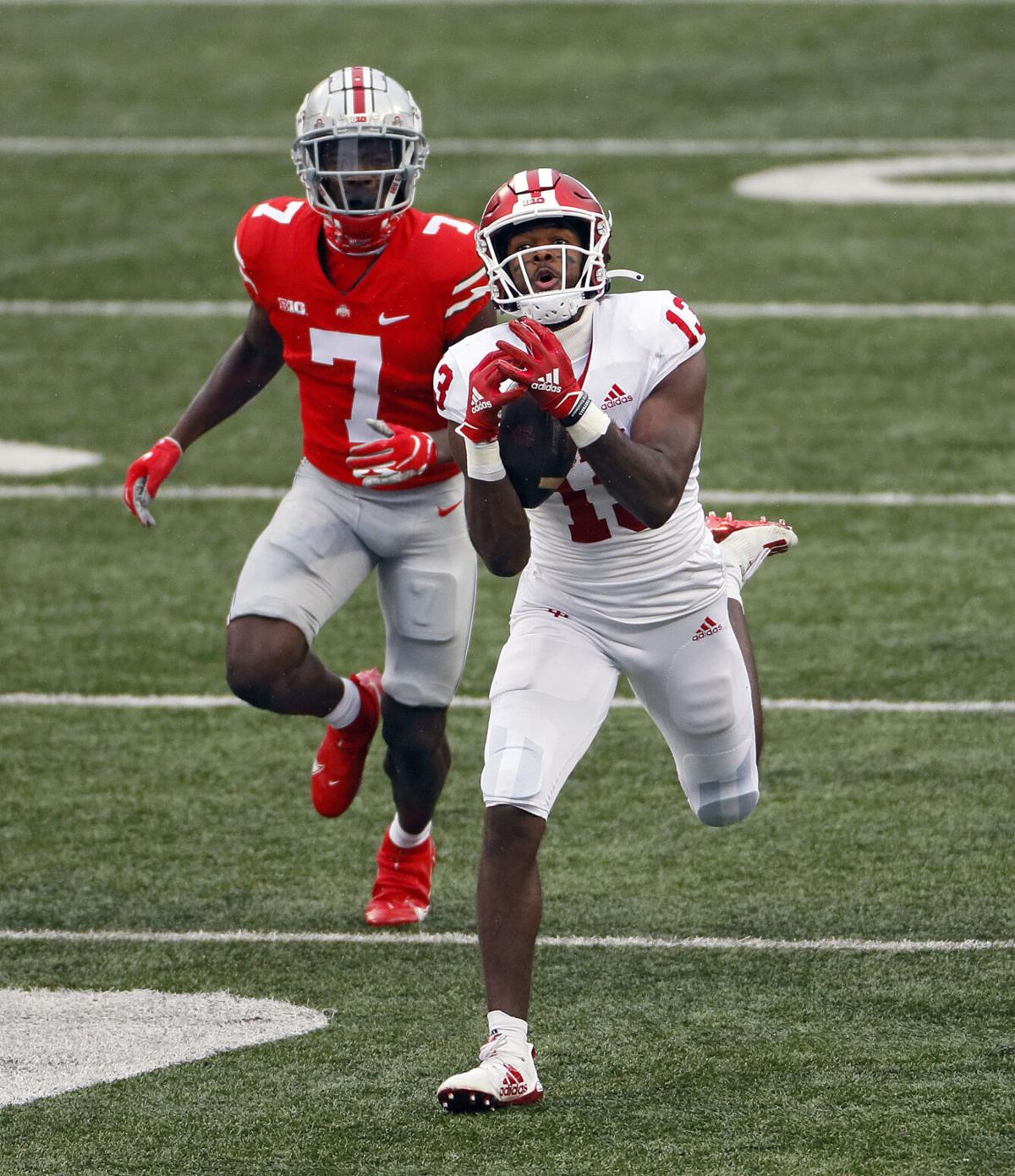 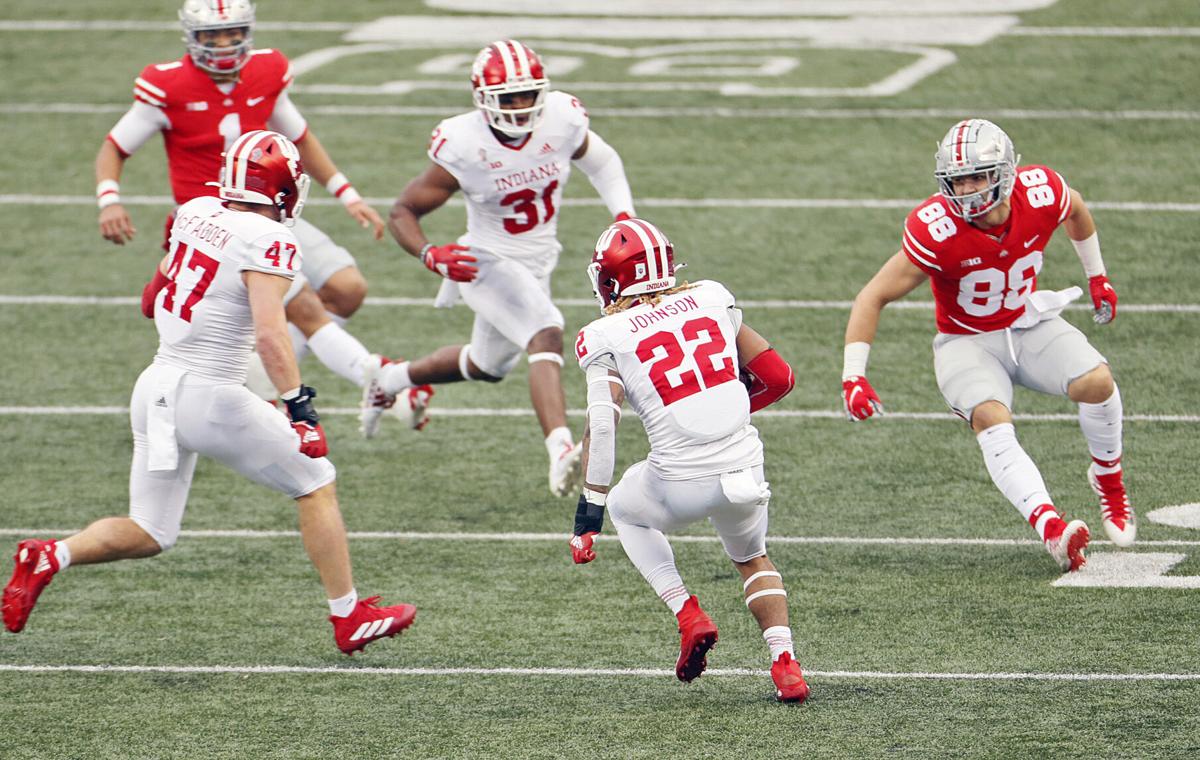 Indiana Hoosiers defensive back Jamar Johnson (22) heads up field after an interception of Ohio State Buckeyes quarterback Justin Fields (1) during the first quarter in their NCAA Division I football game on Saturday, Nov. 21, 2020 at Ohio Stadium in Columbus, Ohio. (Kyle Robertson/ Pool via Ohio State Athletics) 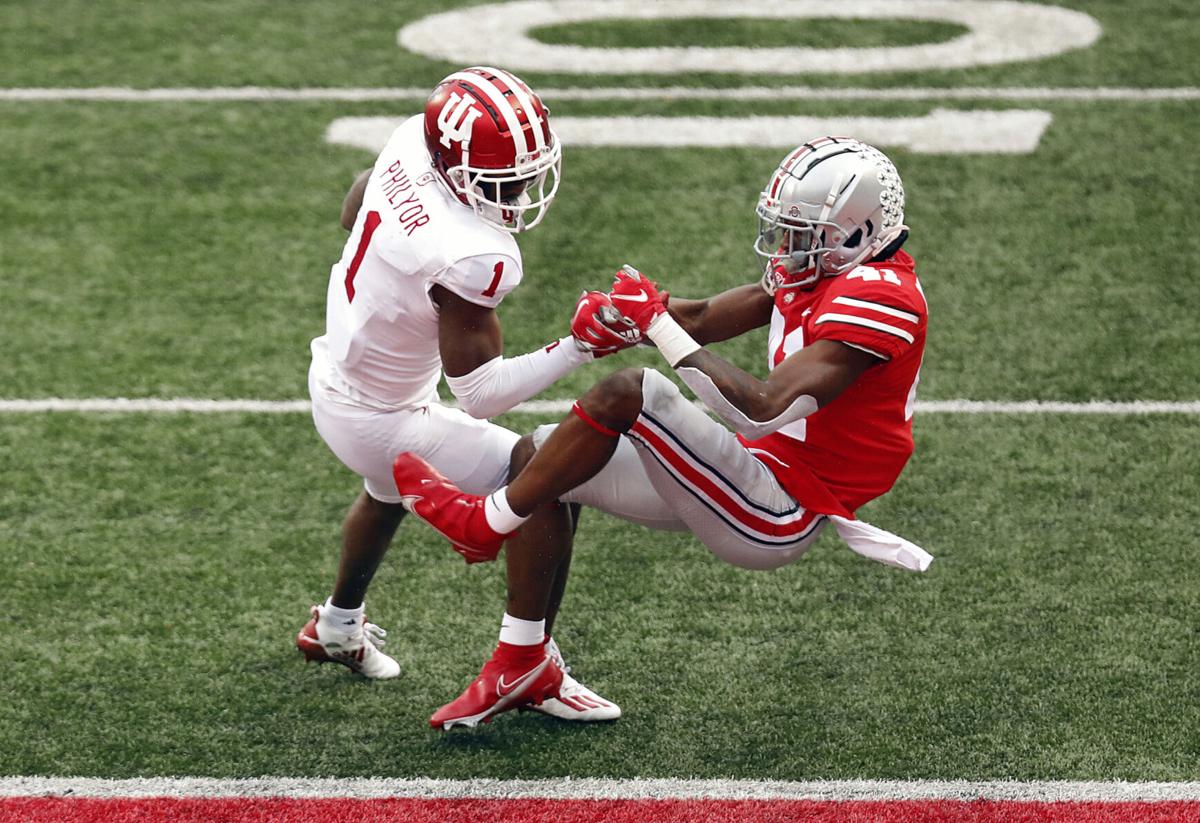 Indiana Hoosiers defensive back Jamar Johnson (22) heads up field after an interception of Ohio State Buckeyes quarterback Justin Fields (1) during the first quarter in their NCAA Division I football game on Saturday, Nov. 21, 2020 at Ohio Stadium in Columbus, Ohio. (Kyle Robertson/ Pool via Ohio State Athletics)

LOUISVILLE, Ky. (WDRB) — Indiana did not have to play a perfect football game to defeat Ohio State for the first time in more than three decades Saturday afternoon in Columbus.

But on a day when the Hoosiers lost 42-35, here is a starter-set list of things Indiana could not do if they expected to win as a three-touchdown underdog:

Fumble at the Ohio State 7.

Fumble at the Ohio State 16 to punctuate a 24-yard interception return.

Drop at least three passes with no defender within galaxies.

Snap the ball over the quarterback’s head.

Corner Ohio State quarterback Justin Fields with multiple blitzers and then allow him to dance away for first downs and a touchdown.

"It hurts," IU quarterback Michael Penix Jr. said. "We didn't get the result we wanted."

Most years when Indiana does all that and falls behind 35-7, the Hoosiers lose 51-10.

This is not the Indiana of Gerry DiNardo, Cam Cameron or Barney Fife. This is a talented, confident and persistently competitive team that made Ohio State block and tackle through the game's final snap before losing by a touchdown at empty Ohio Stadium.

Indiana (4-1) helped beat itself with that list of items above. Fields helped by throwing for 300 yards and two scores. So did the bully-ball Ohio State rushing attack on a day the Buckeyes out-rushed Indiana 307 to minus-1.

But Indiana, ranked No. 9, did a lot of good things. In fact, Indiana did some spectacular things against a team packed with 4- and 5-star recruits that believes it can win the national championship. They stuck four plays of 50 yards or longer on Ryan Day's defense.

IU got a great team, QB got amazing touch, playmakers on the outside, defensive 4 is tough! They’re going to be scary good very soon! Look out! Salute. Nevertheless #GoBucks

IU outscored the Buckeyes 28-14 in the second half, 14-0 in the fourth quarter. That's never been Indiana's DNA against Ohio State. Credit IU coach Tom Allen.

"I'm so disappointed that we fell short but I'm proud of the heart and toughness of this team," Allen said.

"Obviously the score is what matters. But there's no question the gap has been closed. We're not there yet. They still have some elite players. It's no consolation. We came here to win the game ... We expected to win the game. We made too many mistakes to make that a reality."

Indiana's 490 yards on offense looks terrific until you compare it to the 609 yards Ohio State generated on a day when Indiana forced three turnovers.

On a day when Fields threw his first three interceptions of the season, Penix went 26 of 50 for 495 yards and five touchdowns (with one costly interception for an OSU touchdown). Credit Penix as only the third player ever to throw for more than 400 yards with five touchdowns agains the Buckeyes.

"He can make any throw on the field," IU receiver Ty Fryfogle said. "He's very special."

Fryfogle was the most dynamic player on the field. For the third consecutive week Fryfogle set a personal best for receiving yards. He caught seven passes for 223 yards and three scores.

That made Fryfogle the first player in Big Ten history to deliver back-to-back games with 200 receiving yards.

I know @IndianaFootball didn’t go to the ‘Shoe for a moral victory. But today is huge IU validation. Very few can do what Hoosiers did: take a couple huge punches from @OhioStateFB early and survive to make it a 60 minute battle. And make Fields (3 INT) look very mortal.

There were times, many of them, when the Hoosiers looked like the No. 9 team in the nation, a team that won its first four Big Ten games, beating Penn State, Michigan and Michigan State in the same season for the first time in program hisstory.

They certainly looked like a team that will belong in the first national college football playoff Top 25 for the first time in program history when those ratings are announced next week.

But good, and at times, very good, was not enough to beat Ohio State, which is ranked No. 3 and measures itself with Alabama, Notre Dame and Clemson. This game was lost by a string of mistakes in the first half.

The Hoosiers watched the Buckeyes score on their second offensive play. IU staggered and then steadied to tie the game at 7.

They grabbed two first-half interceptions from Fields, who had not thrown an interception in his last 10 Big Ten games.

They staggered as the Buckeyes scored the next two touchdowns.

In a game of nearly 150 plays it’s risky to call one the killer. I’ll take that risk.

With the Hoosiers driving for a touchdown that would have cut the Ohio State lead to 21-14 in the final 3 1/2 minutes of the first half, IU receiver David Ellis caught and quickly fumbled a short pass from Michael Penix Jr.

Ohio State grabbed the prize. The Buckeyes marched 93 for a score that stretched their halftime lead to 28-7.

"I thought it was huge," Allen said. "We had a chance to go in and score. Not only didn't we score, they went down the field."

From there, the Hoosiers outplayed the Buckeyes in the second half but never got closer than a touchdown. They had a possession to drive from their 7 in the final 4 1/2 minutes but failed to generate a first down. They got the ball a final time with 38 seconds to play but failed to advance past the Ohio State 38.

"Where most teams would have laid down, this team has a lot of fight," Fryfogle said.

"We're a great team," Penix said. "The guys fought to the end. I loved what I saw. We showed a lot of great things on the field but we can do better."

IU returns to Bloomington to play host to Maryland next week. The Hoosiers will finish their regular season with games at Wisconsin and a home game against Purdue. It's still a team positioned to deliver the best IU football season in years.