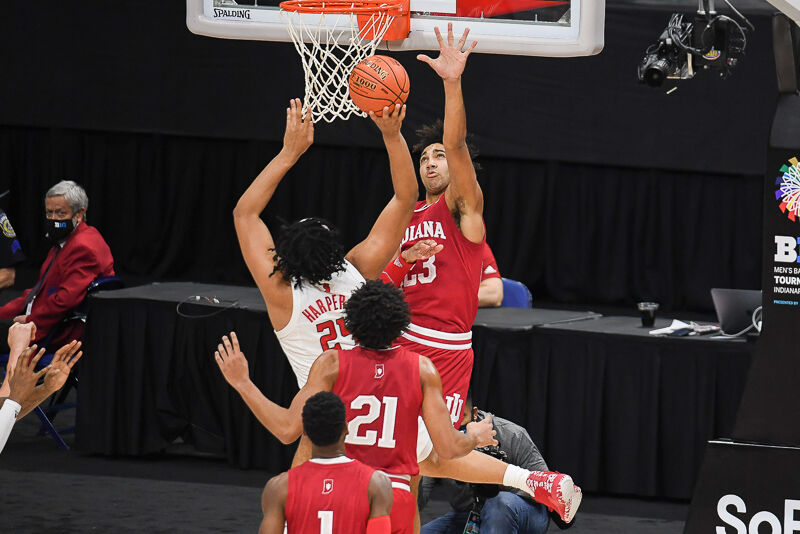 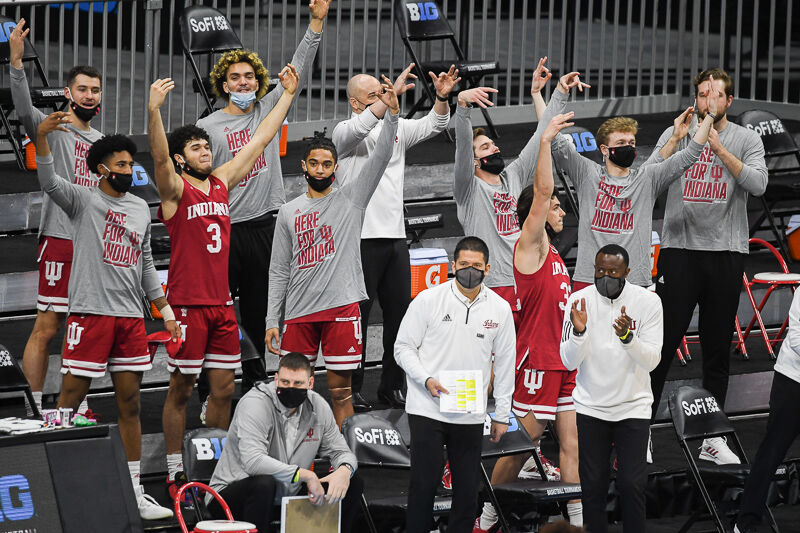 The Indiana bench cheered at the Hoosiers built a 10-point lead in the first half against Rutgers Thursday night. Jamie Owens photo.

The Indiana bench cheered at the Hoosiers built a 10-point lead in the first half against Rutgers Thursday night. Jamie Owens photo.

LOUISVILLE, Ky. (WDRB) — In a season where Archie Miller’s Indiana University men’s basketball team failed to achieve most of its goals, the Hoosiers had a chance to avoid one more splash of negativity Thursday night at the Big Ten Tournament:

Avoid becoming the first Big Ten team to lose three games in one season to Rutgers.

Rutgers whacked the Hoosiers for third time in less than two months at Lucas Oil Stadium in Indianapolis. The final score was Rutgers 61, Indiana 50.

It happened in classic Indiana style. The Hoosiers made their final field goal with 9:50 to play and then missed their final 13 shots.

The Hoosiers failed to make a three-point shot in seven attempts in the second half while leaving Rutgers' Rob Mulcahy absolutely open for a pair of triples that put the game out of reach in the final six minutes.

It was the kind of loss that will inspire more howling about the wisdom of bringing Miller back for his fifth season — other than the $10.3 million buyout the IU athletic department would have to pay the coach if he was replaced with three seasons remaining on his contract.

The Big Ten allowed 8,000 fans into the facility and boos were heard in the final minutes. So was the chant, "Fire, Archie."

“I didn’t hear the fans say anything," Miller said. "If they were chanting my name, that’s up to them. During the game, there’s not a whole lot you pay attention to."

Gregg Doyel of the Indianapolis Star asked Miller if he was entering the off-season wondering if he would return for another year.

“I’m not entering any off season wondering if I’m going to be back," Miller said.

“Those decisions are made way higher than me. My job is to run the program. Doing our thing here. I talk to our administration daily.

“We’re in a good spot. Didn’t capitalize on some opportunities this year to put our to put ourselves in a position to be able to bounce back after last season was obviously canceled short

“So it’s disappointing. And no one’s more disappointed than our team, our players, our program and our coaches. That’s what you worry about right now. You’ve got to build back up. You’ve got to find a way to get yourself off the ground and get some things together here and prepare hopefully for a better off season.

"The questions about me and what not, that’s really not my concern."

In some ways this game was a replay of the two earlier games that Indiana lost to Rutgers.

In January, the Hoosiers led Rutgers by 6 in the second half — and lost by 4 in overtime.

When the teams played in New Jersey last month, Indiana led by 15 in the first half — and lost by 11.

This time, IU battled to a 10-point lead in the first 12 minutes — and was behind by a point at halftime. They went ahead 44-41 with 12 minutes to play -- and then made 2 baskets and 2 free throws the rest of the game.

Trayce Jackson-Davis led Indiana with 19 points. Asked when he would decide if he would return for his junior year or enter the NBA Draft, Jackson-Davis said he planned to take several weeks off before he would consider his future.

Rutgers will plays Illinois Friday at 6:30 p.m. in the quarter-finals of the tournament, which will conclude Sunday.