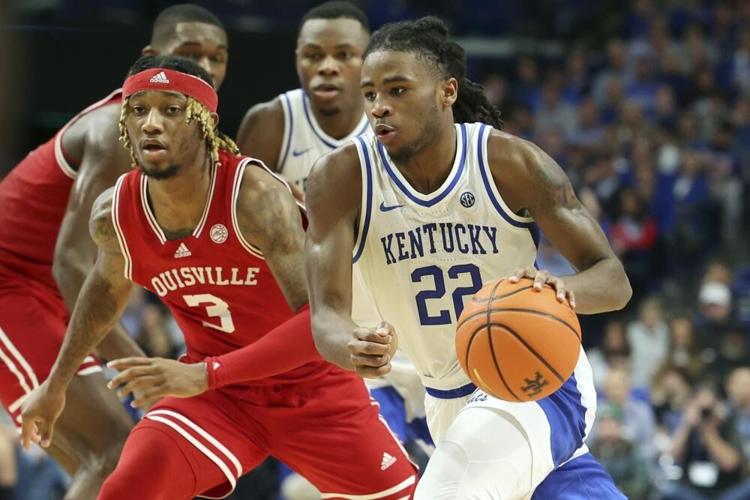 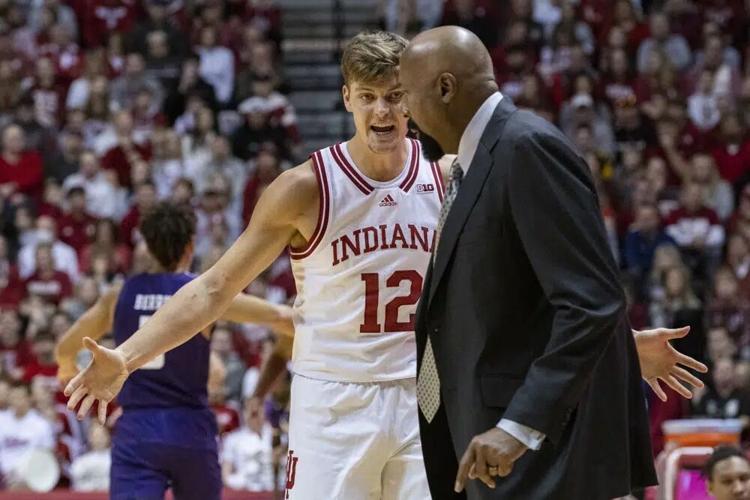 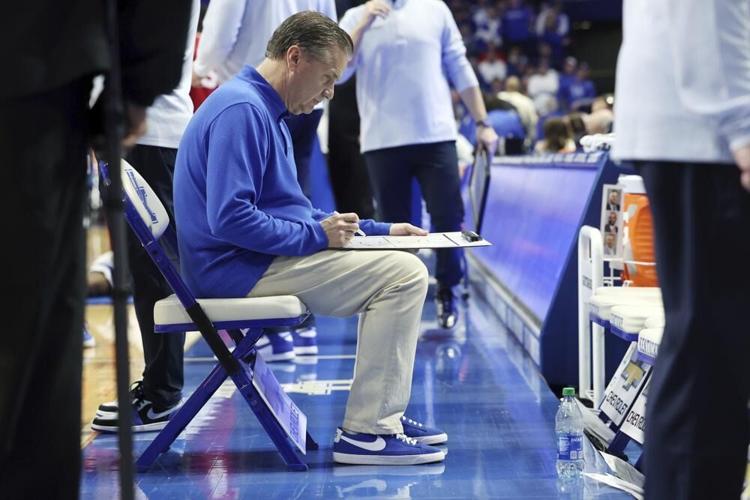 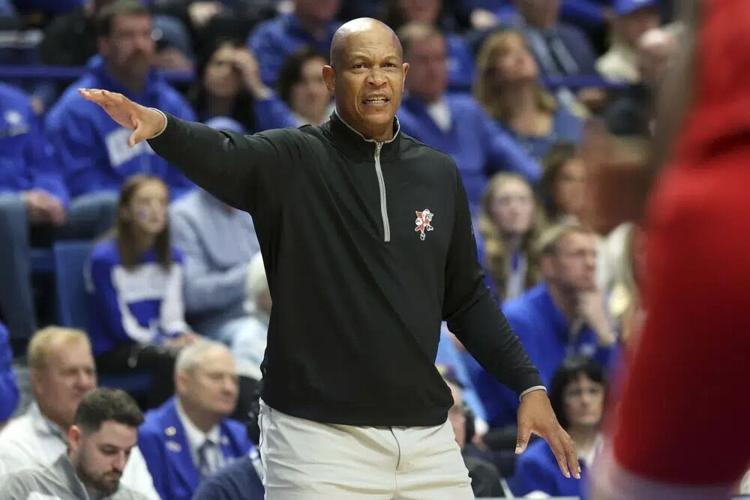 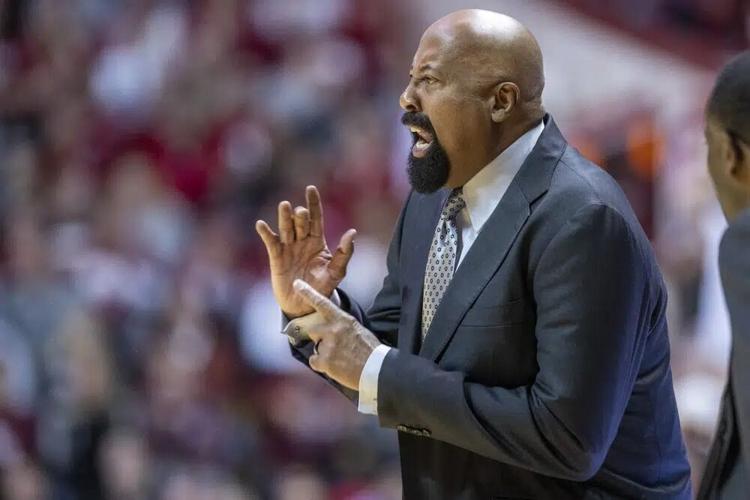 Indiana head coach Mike Woodson reacts to action on the court during the first half an NCAA college basketball game against Northwestern, Sunday, Jan. 8, 2023, in Bloomington, Ind. (AP Photo/Doug McSchooler)

This does not compute: wall-to-wall indigestion for the University of Louisville, Kentucky and Indiana men's basketball programs.

LOUISVILLE, Ky. (WDRB) -- This does not compute: wall-to-wall indigestion for the University of Louisville, Kentucky and Indiana men's basketball programs.

Louisville sits a 2-14, likely charging toward a three- or four-win season with a six-year gap since the Cards' last NCAA Tournament victory.

Kentucky sits at 10-5 with double-digit defeats against the four best teams the Wildcats have played. Ranked No. 1 in Ken Pomeroy's analytics before the season, John Calipari's team has sagged to No. 25 in that power formula. Ranked No. 4 with a pair of first-place votes in the Associated Press preseason poll, the Wildcats have disappeared from the minds of the voters.

Indiana also sits at 10-5, reeling from a stinging come-from-ahead loss to Iowa and an uglier home loss to Northwestern over the last week. Considered one of the favorites to win the Big Ten title and a lock to make the NCAA Tournament a month ago, the Hoosiers are about to experience that Bubble Life — again.

This does not compute.

But that's where we are, racing toward the end of another season where March Madness will be a spectator sport for the best market on the planet for college basketball.

Good luck building a program when you have transitioned through five coaches and three athletic directors in less than six years. You study the lineups that Kenny Payne starts and you do not see a single player who would get major minutes on the Cardinals' teams that made March magical. There are guys who would not see the floor with a telescope.

That's not to say this team should be 2-14. The Cardinals have left two, three or four wins on the court with sloppy ball-handling and defensive lapses. There's always somebody stepping out of bounds or throwing a pass 15 feet over the head of teammate for no reason. Getting back on defense needs to become a priority.

But with the threat of NCAA sanctions no longer in the background, Payne and his staff should be primed to start upgrading Louisville's overall talent when the transfer portal opens this spring. This was never going to be an NCAA Tournament team.

Kentucky is a different kind of mess. John Calipari has lost his mojo. His roster is no longer filled with the 2023 versions of John Wall, Anthony Davis, Julius Randle, Karl-Anthony Towns, Devin Booker, De'Aaron Fox and Tyler Herro. The Wildcats played like a collection of mismatched and overmatched parts.

Kentucky's freshmen are simply Kentucky freshmen. The guys Calipari and his staff found in the portal have shown there are reasons they were available.

A year ago, UK forward Oscar Tshiebwe was the consensus national player of the year. This season, Tshiebwe is barely first-team all-Southeastern Conference. He looked like just another struggling player Saturday at Alabama.

Halfway through the season, the Wildcats are 0-5 against the five best teams they have played, outscored by an average of 15 points in those defeats.

Calipari has always bristled at critics who chirped that he was a coach who needed superior talent at nearly every position to win. He regularly joked that all he did was roll out the balls.

Calipari believes he can X and O with anybody. Now is the time for Calipari to prove it.

And then there is Indiana, riding the fast track toward another season on the NCAA Tournament Bubble Bus.

The Hoosiers started the season with a road victory against Xavier, ranked No. 12 in the AP poll released Monday. They followed that moment by handling North Carolina at Simon Skjodt Assembly Hall.

Don't ask. The Hoosiers failed to compete against Rutgers — again. They have failed to defend in losses that followed. Indiana allowed 40 or more points in all eight halves of losses to Arizona, Kansas, Iowa and Northwestern. This is not the same defense that Bob Knight taught Mike Woodson.

Yes, IU was without guard Xavier Johnson, the Hoosiers' most relentless perimeter defender for nearly all of the last three defeats. Yes, forward Race Thompson followed Johnson to the bench in the first half of the Iowa debacle after suffering a knee injury.

Indiana has other pieces who should be able to defend basic straight-line drives. Like Calipari, Woodson needs to demonstrate his ability to X and O soon, starting this week with games against Penn State and Wisconsin.

Opposing teams have also played with more urgency than the Hoosiers. That needs to be fixed, too.

Otherwise, Indiana is tracking toward the same destination as Kentucky and Louisville — watching another NCAA Tournament unfold.

This does not compute.

DUI suspect in court after crashing truck into Louisville Penn Station, landing 'against the grill'