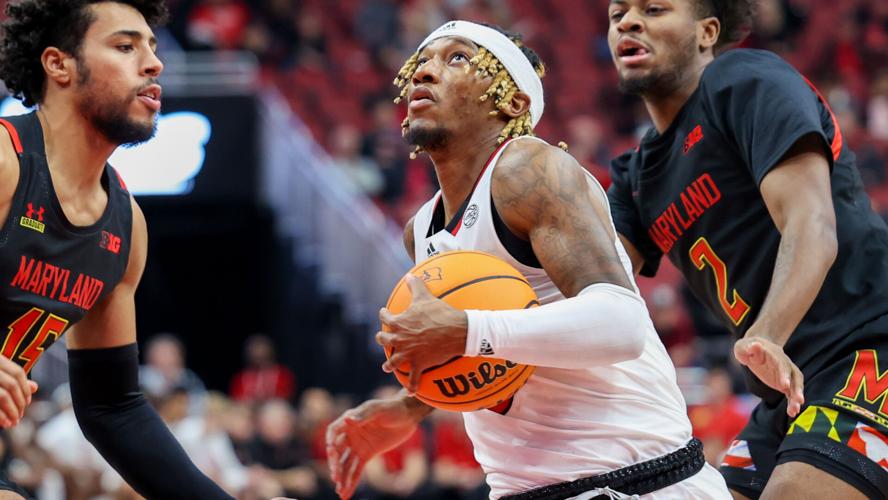 El Ellis drives to the rim in Louisville’s loss to Maryland. 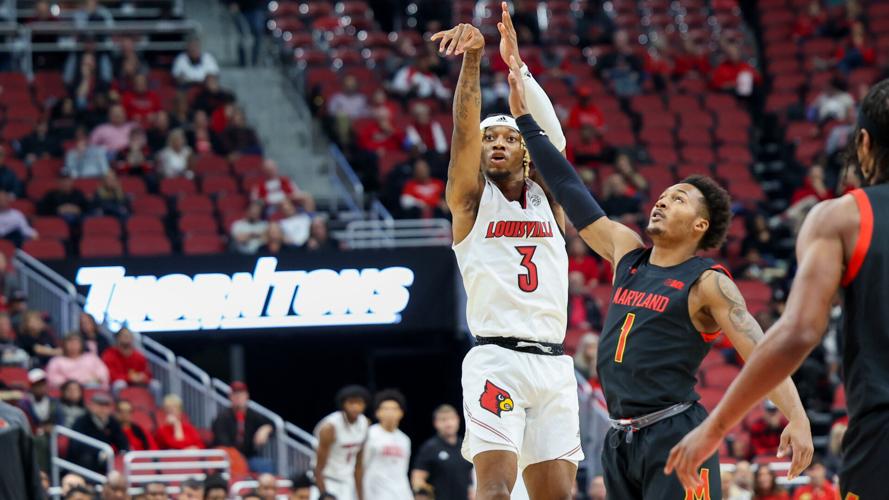 El Ellis goes up for a jump shot in Louisville’s loss to Maryland. (Eric Crawford photo) 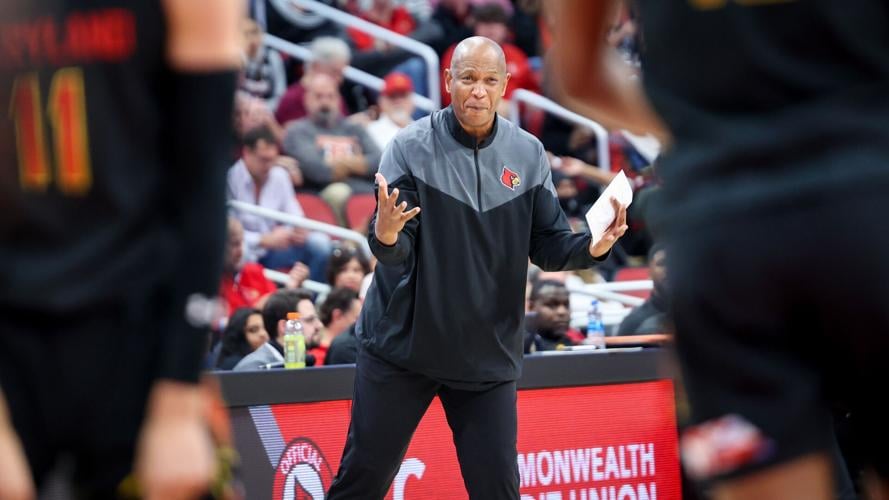 Louisville coach Kenny Payne urges on his team during a game against Maryland in the KFC Yum! Center.

LOUISVILLE, Ky. (WDRB) — This time the throw up your hands, toss your beverage, relentlessly ugly stretch of basketball came in the first two minutes of the second half.

You have seen it before -- the moment when the University of Louisville men's basketball team loses touch with any chance to win its first game. On Tuesday night in the KFC Yum! Center the moment came early in the second half of  Louisville's 79-54 loss to Maryland.

Even their coach Kenny Payne wondered if his guys surrendered.

Down 11 points at halftime, the Cardinals found themselves trailing by 18 before Payne could demand a timeout.

"The last thing I said to the guys before walking on the court was the first five minutes, be desperate," Payne said. "Don't let them make a run. Those were the last words."

Payne repeated the message during the timeout. Not that a timeout mattered. This Cardinal team needs more assistance than a timeout can supply.

The Cards are short on talent, depth, confidence, belief, understanding and other qualities essential to winning basketball games, especially against Top 25 competition. This program lost 15 of its last 18 last season, 8 by double figures. Doubt takes over quickly with the Cards.

Maryland, No. 22, made another shot from distance the next time the Terps touched the ball. If you still weren’t convinced how they intended to attack, the Terps added another three-pointer and a dunk.

After losing its first three games by a single point, Louisville has lost its last four by an average of 25.5 points. The Cards are one of six winless D1 teams. Discouragement is never far away.

"At times it looked like we gave up. I just asked the guys, 'Is that the case? Have you given up?' "

"We're competitors. Why would we quit? We're in a rough time right now but that don't mean we're going to quit. We've just got to keep fighting."

Ellis had 15 points for the Cards, making half of the four shots from distance Louisville converted. None of his teammates were in double figures.

But moving the ball effectively remained an issue. The Cards managed only 6 assists. That led to Louisville making 19 of 56 shots (33.9%), which translated into a woeful .771  points per possession. Anything less than a point per possession creates issues.

It was another game when … wellll … uhhh … the Cardinals were totally overwhelmed the way they were against Arkansas and Texas Tech in Maui last week.

The loudest cheers in the second half came after Maryland was up by 33 and Payne was simply looking for guys willing to block out or hit the floor in pursuit of a loose ball. Fabio Basili, the freshman guard, made a 3-point shot. Devin Ree, another freshman, followed with another.

Then Basili dove for a loose ball, and many of the folks who remained at the KFC Yum! Center stood and roared in appreciation.

"We can't let the other team be more desperate," Basili said. "We have to be the most desperate team out on the court."

It was another game that suggested Louisville is trending toward an 0-10 start, with the Cards’ first chance to give Payne his first victory on Dec. 17 against Florida A&M. The Rattlers are 1-4 but (like Louisville) yet to beat a Division 1 opponent.

First, there will be an Atlantic Coast Conference game against Miami (Florida) Sunday at 1 p.m.

"This is really hard," Payne said. "It's not going to get easier. There's only one way out. That's to fight with every bit of fiber that's in your body. To understand that no matter who we're facing we probably won't be the most talented team.

"But if you have a will and if you play desperately on the defensive end and fight to get rebounds and be efficient offensively we've got a fighting chance ... we got dropped off in the jungle and we've got to fight our way out. That's what it is, survival of the fittest."

Louisville men's basketball has a chance to beat a reeling Georgia Tech team for its first ACC win of the year.