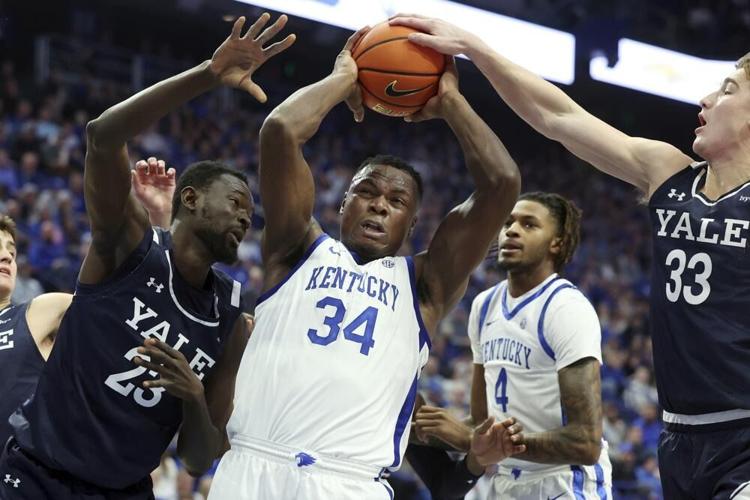 Kentucky's Oscar Tshiebwe (34) is pressured by Yale's Jack Molloy (33) and Yussif Basa-Ama (23) during the first half of an NCAA college basketball game in Lexington, Ky., Saturday, Dec. 10, 2022. (AP Photo/James Crisp) 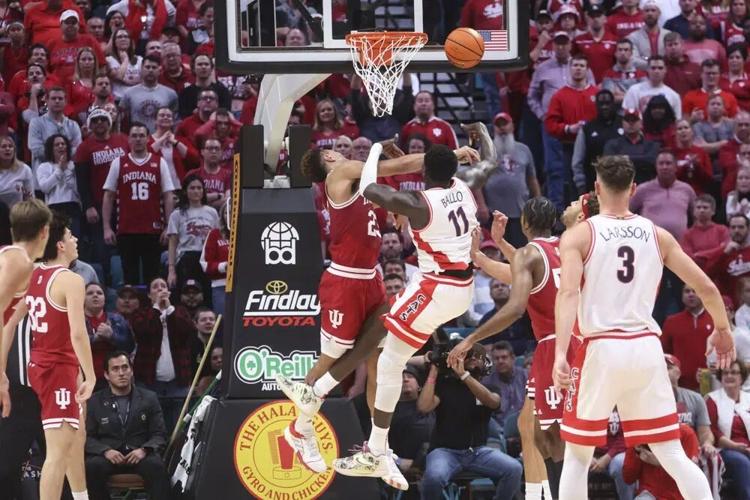 Kentucky's Oscar Tshiebwe (34) is pressured by Yale's Jack Molloy (33) and Yussif Basa-Ama (23) during the first half of an NCAA college basketball game in Lexington, Ky., Saturday, Dec. 10, 2022. (AP Photo/James Crisp)

LOUISVILLE, Ky. (WDRB) -- Over the last five complete men's college basketball seasons, this is how many teams lost three games by Dec. 17 and then rallied to make the NCAA Final Four:

Two: Villanova in 2022 (and the Wildcats actually lost four early games) and Michigan State in 2018.

Over the last 10 seasons, the number is five teams.

I went to the videotape Monday morning, because, on Saturday, Dec. 17, both Kentucky and Indiana logged their third regular-season losses: the Wildcats taking a 10-point neutral court defeat from UCLA and the Hoosiers getting run around and around and around then out of Allen Fieldhouse in a 22-point loss to Kansas, the defending national champs.

I'm not certain if the howling is louder in Lexington or Bloomington, but UK and IU fans might be more annoyed than Louisville fans. What say you?

Losing to UCLA by 10, Gonzaga by 16 and Michigan State by nine in double overtime does not mean the Wildcats have taken a 10-count for this season. Wasn't it only last season that Kentucky put an 18-point beatdown on Kansas in Lawrence in late January? The Jayhawks rallied to win the NCAA Tournament while the Wildcats exited in the opening round against Saint Peter's?

Losing to Kansas by 22, Arizona by 14 and Rutgers by 15 does not mean the Hoosiers have put their season on the brink. The Indiana team that won the 1981 NCAA title lost to Kentucky, Notre Dame, North Carolina, Clemson and Pan American before New Year's Eve that season. (OK, I know Isiah Thomas and Randy Wittman aren't walking through that door.)

But the record shows that teams with three losses on their resumes by mid-December are not wise picks to do remarkable things in March.

There are considerable flaws with both teams that John Calipari (UK) and Mike Woodson (IU) must address.

Kentucky has been below average shooting the ball inside the three-point line, making only 49.1% of its attempts. Last season, UK made 53.5% of its two-point attempts. Until the ugly 2021 season, the Wildcats made at least 50% of its two-point attempts for nine consecutive seasons. Scoring from distance is essential. Scoring around the rim is, too.

As always, the UK conversation begins with Oscar Tshiebwe. Last season, Tshiebwe made 60.6% of his two-point attempts. This season, he is 53 of 95, dropping his percentage to 55.8.

He's still a terrific player. But he hasn't been consensus-national-player-of-the-year good the way he was last season. After an offseason procedure on his knee, Tshiebwe might need more time. He also needs more help.

The Wildcats also have work to do improving their ball-handling and passing. They're turning the ball over on more than 17% of all possessions, ranking 99th in the nation in that category, according to the numbers at Ken Pomeroy's analytics website.

Does Kentucky have a Final Four quality backcourt? I haven't seen it.

I'm not certain there is one statistic that outlines the problem with the Hoosiers (8-3). Several critics have defined it as a lack of toughness.

Kansas and Arizona are Final Four-quality teams. Credit to Woodson and IU athletic director Scott Dolson for junking the Crossroads Classic and upgrading the IU schedule. The Arizona and Kansas losses provided hours of video about what the Hoosiers must improve. Denny Crum regularly scheduled games like that for his Louisville teams because he wanted to know every flaw.

The Hoosiers have been too soft around the rim at the defensive end, especially for a team with a fourth-year all-American candidate (Trayce Jackson-Davis) and sixth-year senior (Race Thompson).

Indiana must also get healthy. As soon as freshman guard Jalen Hood-Schifino returned from back issues, Xavier Johnson, the team's senior point guard, exited with foot injury that is likely to keep him out for weeks. His return remains a mystery.

There will be plenty of minutes for Tamar Bates, Trey Galloway and maybe C.J. Gunn. Their performance will determine whether Indiana can be a legitimate contender in the Big Ten.

If the Hoosiers perform at Iowa (Jan. 5) the way they did against Rutgers, Arizona and Kansas, you can forget that.

Conference play will be equally daunting for Kentucky. Tennessee, Alabama, Arkansas and others look formidable. The Vols have wins over Kansas and Maryland. Alabama won at Houston and beat North Carolina.

Arkansas has handled San Diego State and Oklahoma and is getting stronger with the addition of freshman Nick Smith. Unbeaten Mississippi State has top-50 wins over Marquette and Utah. Don't dismiss Auburn or Texas A&M, especially on the road.

This won't be an SEC walkover for Kentucky, especially a Kentucky team that has lost to the three best teams it has played.

Jim Boeheim was critical of NIL deals and coaches taking advantage of the new-era of college basketball.

Rick Bozich previews busy Tuesday night of hoops for U of L, UK and IU

Rick Bozich previews busy Tuesday night of hoops for U of L, UK and IU

WDRB Mornings' Sterling Riggs is a dad again as he welcomes his newborn son!

Smoke billows out of train after derailment in Ohio, Pennsylvania

Death toll reaches 4,000 after earthquake along border of Turkey, Syria