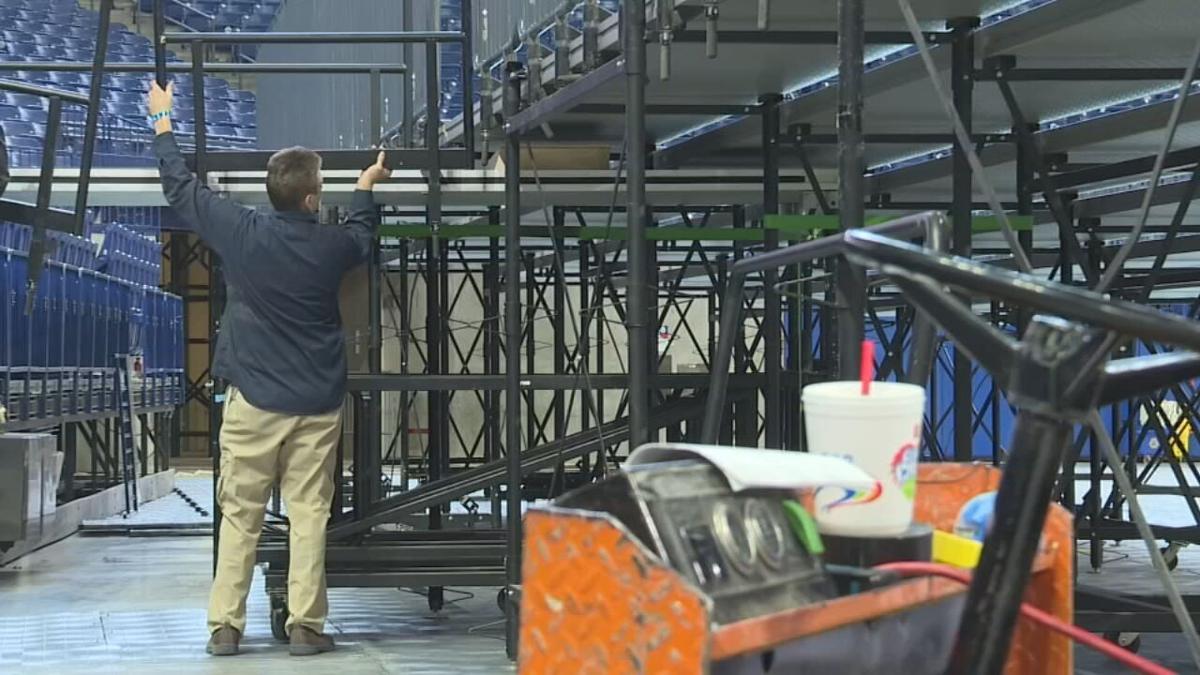 Preparations for the NCAA Tournament at Lucas Oil Stadium on Feb. 26, 2021. (Image via CNN)

Preparations for the NCAA Tournament at Lucas Oil Stadium on Feb. 26, 2021. (Image via CNN)

LOUISVILLE, Ky. (WDRB) — Last season was difficult. No NCAA Men’s Basketball Tournament. It was the first major hit to the national sports calendar because of the novel coronavirus.

But this ... this is embarrassing.

In a year when the NCAA Tournament will return with all 67 games scheduled to be played hours away in Indianapolis, Bloomington and West Lafayette, Indiana, the University of Louisville Cardinals joined the Kentucky Wildcats, the Indiana Hoosiers and Western Kentucky Hilltoppers on the outside of the field.

This will be the first time since 1965 the Cardinals, Wildcats, Hoosiers and Hilltoppers have missed the field. In 1965, the field was 23 teams — not 68.

The tournament selection committee made it official early Sunday evening, when Chris Mack’s 13-7 team was named the first replacement team. The Cards will compete if another team has to withdraw because of COVID-19 issues, which is certainly a possibility.

Related: CRAWFORD | Louisville, hampered by COVID-19 pauses, left out of NCAA field but is a replacement team

Also sitting outside the fun are Kentucky and Indiana, which endured losing seasons.

The Wildcats finished a 9-16 season with a first-round loss to Mississippi State in the Southeastern Conference Tournament. Indiana (12-15) lost its last six games, including an 11-point stumble to Rutgers in the Big Ten Tournament.

Western Kentucky blew a 7-point lead in the final three minutes of the Conference USA Tournamet final, losing to North Texas, 61-57, in overtime.

And Louisville lost its final two games by double figures — after suffering king-sized losses to Wisconsin and North Carolina early in the season.

The Cards were also likely penalized because they were limited to 20 games due to a pair of long pauses related to the coronavirus.

Still, minutes before the field was announced, 81 of the 90 brackets shared at BracketMatrix.com featured Louisville in the field. It was the No. 1 surprise in the bracket reveal.

Meanwhile, as the locals reflect on what went wrong, Rick Pitino, the former head coach at Louisville and Kentucky, will tie a tournament record when he leads Iona into its opening game against SEC champion Alabama. The Gaels earned a No. 15 seed for their upset victory in the Metro Atlantic Athletic Conference in Pitino’s first college season since he was dismissed by Louisville in 2017.

Pitino also had tournament teams at Boston University and Providence College. Tubby Smith and Lon Kruger are the two other coaches who have directed five teams into the tournament.

Morehead State, a team Kentucky beat by 36 points in November, will represent the Ohio Valley Conference. The Eagles will play West Virginia and coach Bob Huggins.

Illinois and Michigan gave the Big Ten Conference two of the four overall No. 1 seeds, along with Big 12 champion Baylor and overall top seed Gonzaga, which finished 26-0 and won the West Coast Conference.

The Big Ten’s inability to add another national championship since Michigan State and Tom Izzo won in 2000 will be one of the top national storylines in the event. Since then, the Big Ten has placed teams in the Final Four 13 times and in the championship game eight times without winning a title.

The Big Ten tops the 2021 field with nine representatives — Illinois, Michigan, Ohio State, Iowa, Purdue, Wisconsin, Rutgers, Maryland and Michigan State. The Spartans earned one of the last spots in the field ahead of Louisville. They will play a Thursday night game against UCLA.

In addition to U of L, UK, IU, other prominent programs like Duke and Arizona also failed to qualify.

The Atlantic Coast Conference and Big 12 both put seven teams in the field. For the ACC, that group included Georgia Tech and Virginia Tech, teams that Louisville defeated.

The remainder of the tournament will be played in Indianapolis, with teams being quarantined in their hotels throughout the event.

The Final Four will be played April 3 and 5 at Lucas Oil Stadium. Virginia won the last national title in 2019.

7 tips for keeping pets safe during Thunder Over Louisville