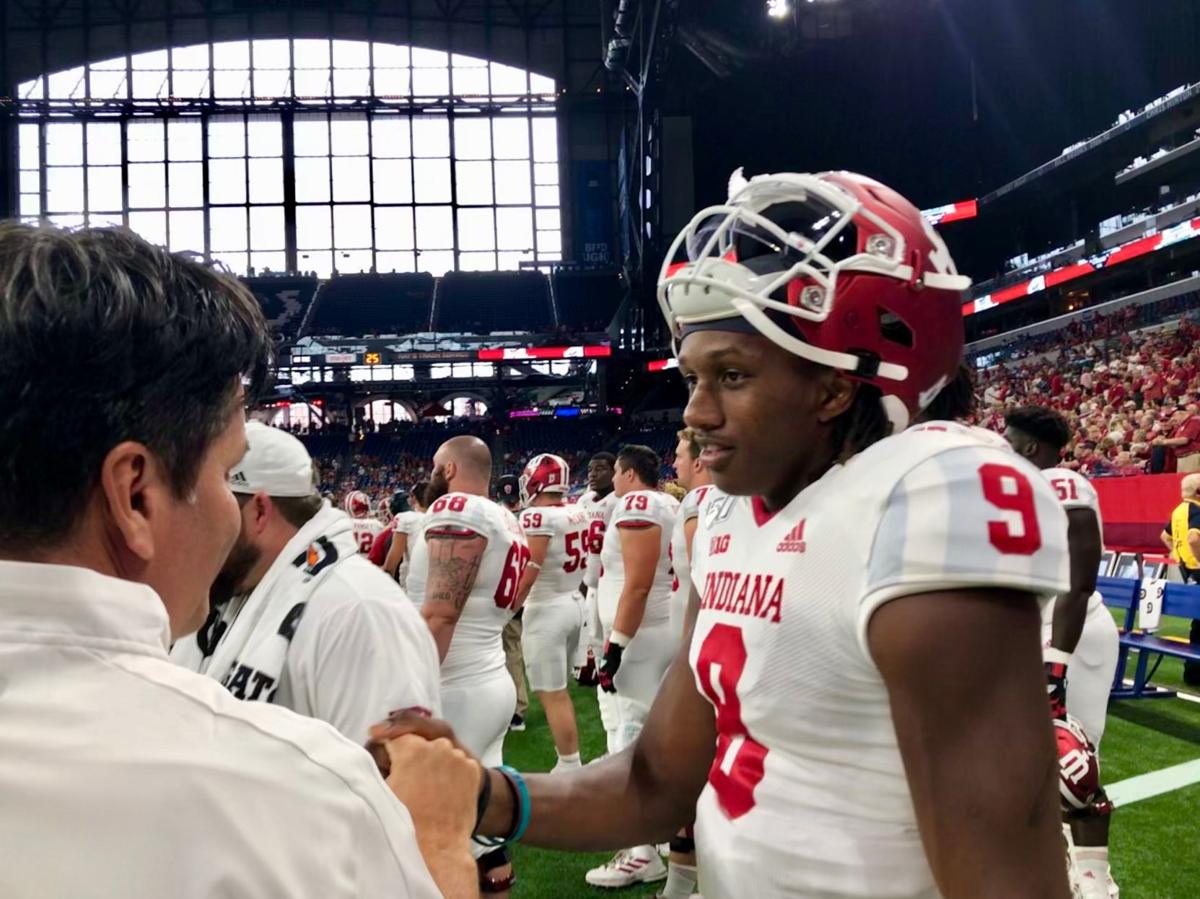 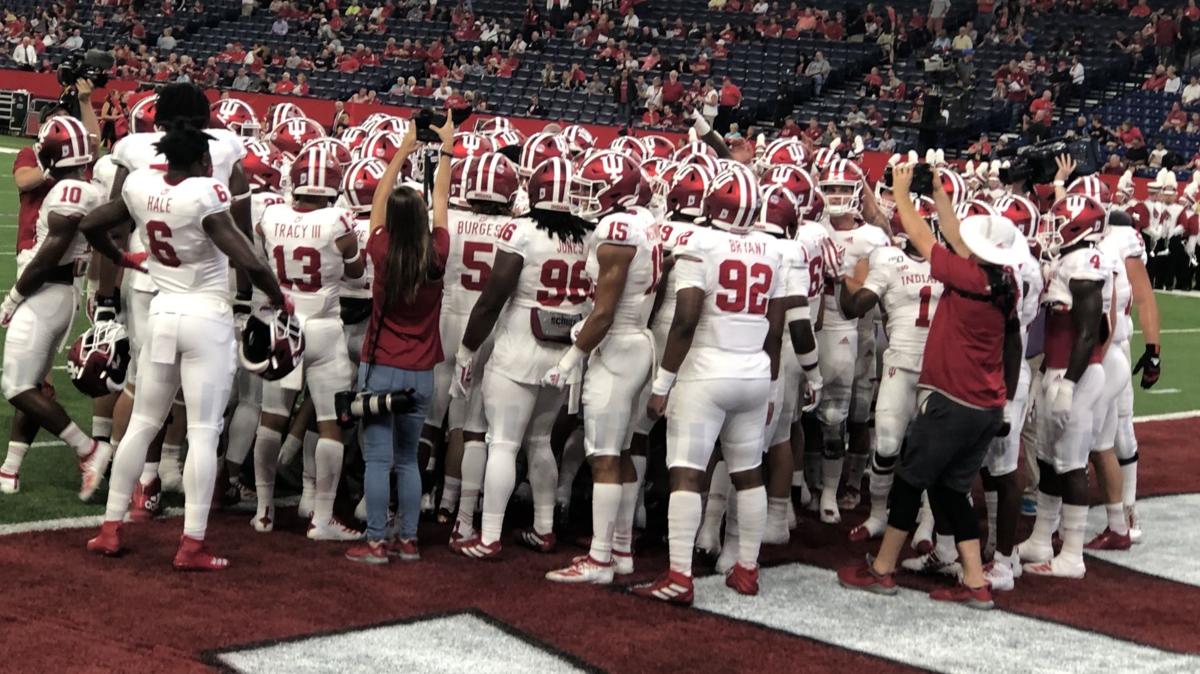 INDIANAPOLIS, Ind. (WDRB) — This performance won’t beat Northwestern. It might not beat Maryland. It would be questionable at Purdue — unless the Boilermakers keep fumbling and throwing interceptions.

Ohio State at home? You know better than to ask that about an Indiana football team.

Indiana did enough to beat Ball State, 34-24 — in the Hoosiers’ season opener at Lucas Oil Stadium Saturday as 21,437 observed.

"To be able to win the game and some of the time not play very good, it's a great feeling," IU coach Tom Allen said.

They out-gained the Cardinals by 76 yards. They made more big plays. The Hoosiers never trailed.

Quarterback Michael Penix Jr. delivered the second-best passing performances an Indiana freshman has delivered in his first start. Only Antwaan Randle El has played better -- and it's never a bad thing to be mentioned in the same sentence with Randle El. The comparison was justified after Penix delivered 393 yards in total offense, leading the Hoosiers in passing and rushing.

Halfback Stevie Scott ran for a pair of touchdowns. Logan Justus kicked four field goals, three of them 48 yards or longer. "I told the coaches before the game that I was comfortable from 56 to 58 yards," Justus said.

But did the Hoosiers do enough to suggest they can make the move the program must make to get to six, seven or eight victories?

There's considerable work to do. Even Allen frowned at his team's tackling and blocking.

I need more consistent proof of a powerful running game, a running game that can put an inferior team away

I saw too many interceptions. I did not see enough takeaways, only one in the final 90 seconds. "Defensively, we didn't tackle very well at all," Allen said. "That's what sticks out to me ... if they don't want to wrap up, they're not going to play."

There were too many of the issues that have plagued Indiana football since the last time the Hoosiers won a bowl game (1991, no need to look it up.)

Penix looked like the guy who deserved to replace Peyton Ramsey at quarterback. He also looked like a guy who should inspire Ramsey to keep his legs and throwing shoulder in top operating condition. Both things can be true.

Penix finished with 24 completions in 40 attempts for 326 yards, spreading the football to seven receivers. He also ran seven times for 67 yards, making him the Hoosiers' leading rusher.

The dazzle came first. Penix stood confidently in the center of the pocket, planted his left foot and threw a laser to Nick Westbrook that ended with the celebration of a 75-yard touchdown pass on the Hoosiers’ second possession.

"That was a great play, great protection, great catch by Nick, but you've got to keep playing," Penix said.

"It was perfect," Westbrook said. "You can't ask for a better throw ... it's a huge arm. He showed it today and he's going to keep showing it all season. It's a rocket."

Westbrook dropped an easier catch, a certain 65-yard touchdown, without a defender near him late in the third quarter.

Penix also had his freshman moment. Two of them.

Ball State cornerback Antonio Phillips took advantage of Penix staring down a receiver and intercepted a pass on IU’s next possession. In the second quarter, Penix delivered another pick that squashed an IU drive deep in Ball State territory by throwing the football four feet wide of Ty Fryfogle.

"You turn the offense over to him, you've got to trust him," said Allen, who never considered making a change.

"I forgot about (the interception)," Penix said. "You've just got to flush it and get to 1-0. Keep driving. Keep working."

The Hoosiers have one week to make a serious upgrade. They open their six-game home schedule when Eastern Illinois visits next Saturday. The same Eastern Illinois that opened with a 24-10 loss to Chattanooga Thursday night.

Everybody said Scott was stronger, faster and tougher to tackle this season. There was little evidence of that against Ball State. In the first half he carried seven times for nine yards. His longest run ended after seven yards.

Scott and the offensive line started the second half as if offensive coordinator Kalen DeBoer questioned what they were doing. Indiana moved 63 yards in seven plays to push their advantage to 23-10.

The Hoosiers inched their lead to 31-17 early in the fourth quarter on another touchdown by Scott, who finished with 48 yards on 19 carries. They had a chance to put the game away by moving ahead by three scores.

Instead they went three-and-out and watched Ball State score on a 36-yard pass to cut the margin to 31-24. Justus gave the Hoosiers a reason to exhale with a 50-yard field goal.

Don’t ask. The Hoosiers will advance from the worst team on their schedule to playing a team that is likely the best.