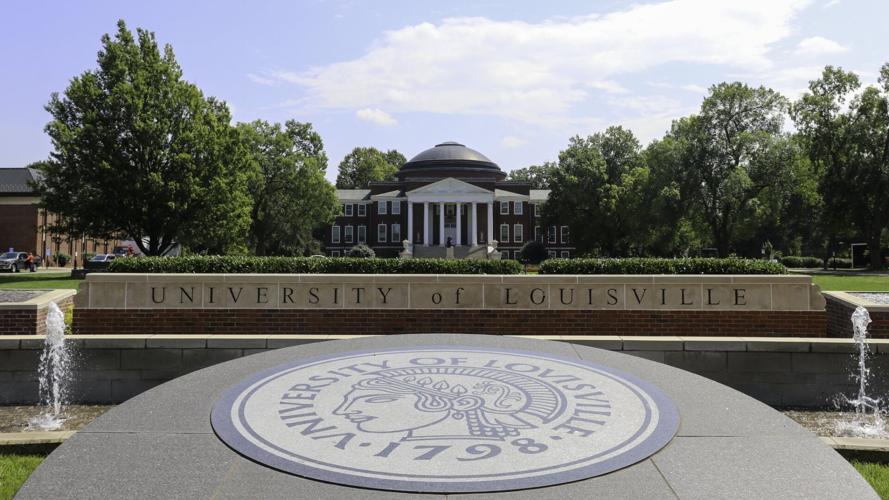 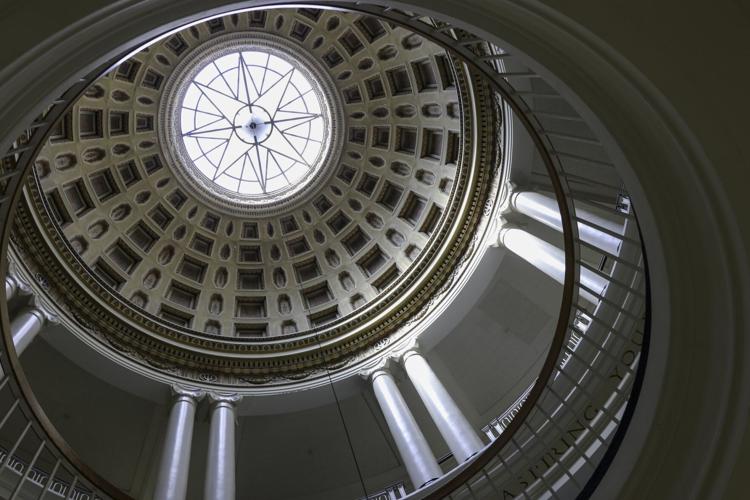 The rotunda inside Grawemeyer Hall on the campus of the University of Louisville. WDRB Photo.

The IARP's finding repudiated NCAA assertions against Louisville, and former coaches Rick Pitino and Chris Mack, at almost every turn. The panel took a dim view of the NCAA's attempt to amend its original allegations with information from a book by convicted former Adidas consultant Merl Code. It rejected the NCAA's argument that adidas was acting primarily in U of L's interest when rogue employees sought to pay a recruit $100,000 to attend Louisville and sign with the shoe company after turning pro. And it dismissed NCAA arguments that Pitino didn't foster an atmosphere of compliance.

"The panel was not persuaded by the balance of the testimony and the evidence that was presented to us," chief hearing officer David Benck said in a news conference Thursday. 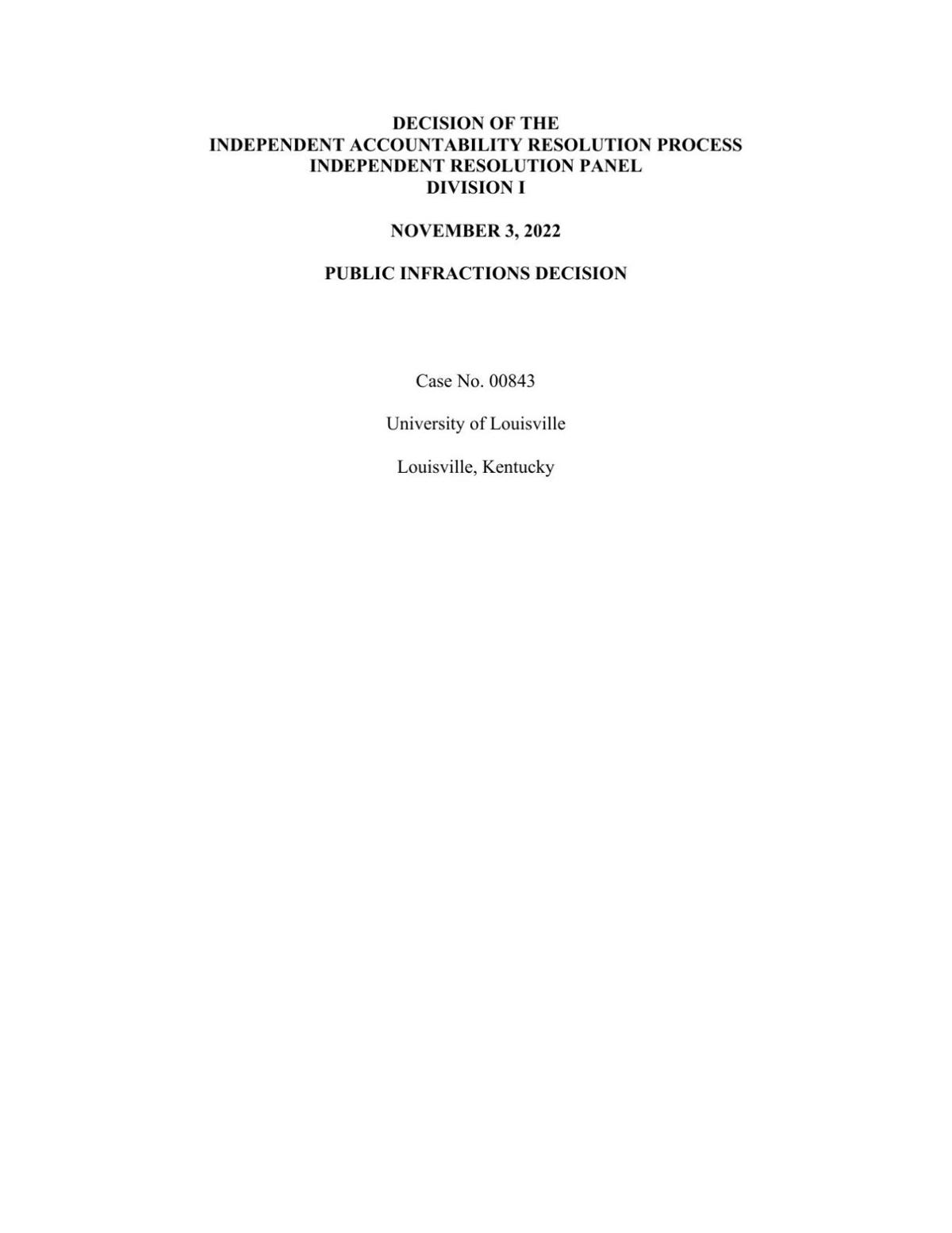 But more than anything, the panel seemed to reject the NCAA's enforcement business-as-usual way of doing things, rejecting long-held assertions and attempting to impose a higher standard for proof, refusing to follow the NCAA's Complex Case Unit in connecting the dots.

Here are five highlights from the report, and from Benck's discussion with reporters.

Louisville (and other schools) clearly benefitted from the IARP panel's willingness to take a fresh look at conclusions that the NCAA's own committee on infractions often takes for granted. Where the NCAA was trying to promote the relationship between Louisville and Adidas as hand-in-glove, the IARP viewed adidas as a large international company with thousands of employees, some of whom may be acting on their own.

"The hearing panel often was struck by the Complex Case Unit's request to this hearing panel to take many of the specific assertions at face value and to read often limited information in the most expansive form, even when confronted with additional plausible explanations or clarifications of such information," the IARP report reads. "This request was specifically perplexing in those instances ... where it does not appear that the Complex Case Unit undertook additional action to confirm that their contextualization of the information presented or the overall impact of the actions as described, or even whether a portion of an allegation was, in fact, still before this hearing panel. In those instances, therefore, where that additional context has been provided by Louisville or other involved individuals, and their credibility was not effectively countered, this hearing panel has generally been accepting of this additional clarifying context as it has undertaken its review."

At the head of this kind of thinking was the NCAA's insistence that Adidas met its classic definition of a booster, or "representative of the athletics' interests." Instead, the hearing panel said that U of L's relationship with Adidas was "standard compared to the other similar agreements in the case record. The mere existence of a sponsorship agreement is not enough to trigger the apparel company as representative of Louisville's athletics interests. ... The sponsorship was designed to promote the apparel company, not Louisville."

In the same way, the NCAA assumed that the panel should accept that Louisville knew — or should have known — Adidas was involved in the recruitment of Brian Bowen. Instead, the panel determined that Pitino did not know of the $100,000 offer or $25,000 payment to Bowen and could not have reasonably been expected to know.

And it went beyond that to note that he "maintained an antagonistic relationship with apparel companies, not a relationship in which he relied" on them.

2. THE IARP FOUND LOUISVILLE AND PITINO DID PROMOTE AN ATMOSPHERE OF COMPLIANCE:

A key allegation from the NCAA is that Pitino not only did not foster an atmosphere of compliance but failed to address "red flags" in the recruitment of Bowen. (This, no doubt, brought up bad memories for both, given that the NCAA successfully argued that Pitino had not followed "red flags" in the Katina Powell sex-for-recruits violations, flags Pitino and the university both argued were virtually non-existent.)

In this case, the IARP agreed that the "red flags" were not substantial enough to prove negligence on the coach's part.

One by one, it examined the things the NCAA said should've triggered more action by Pitino. But in the end, it concluded, "Red flags were not in plain sight. ... Notably, the federal indictment repeatedly characterized Louisville, and by association (Pitino), as a victim of a scheme in which the co-conspirators were cautious to avoid discovery and carefully distanced Louisville from what was occurring. Further more, even assuming [for the sake of argument] that a coach fails to see one red flag, such failure does not impute the coach for other red flags that would not have been discovered as a result of another red flag. Red flags cannot always be viewed in the aggregate and should be analyzed in context with the specific facts for which they are attributable to."

Moreover, the panel found that Pitino rebutted the allegation that he did not promote an atmosphere of compliance by producing proof that he had frequently talked to staff and players about the issue of compliance and made it a frequent topic of his inquiries.

3. THE NCAA DID ACTUALLY ARGUE THAT PITINO WAS "TOO STRICT" ON COMPLIANCE ISSUES:

The NCAA, according to the report, said, "(Pitino) was clear and consistent. Instead of promoting an atmosphere of compliance, he let them know that if they violated rules, they would be fired, which again promoted an atmosphere whereby the assistant coaches were not open with him."

This argument, the IARP panel seemed to brush aside.

"The hearing panel ... was not persuaded by the argument that (Pitino) was too strict on compliance for it to be effective," the report reads. "Nor, is the hearing panel convinced, as suggested by the Complex Case Unit, that an alternative less strict environment would have somehow resulted in a more effective compliance program under the circumstances."

Moreover, it said, "While a head coach is presumed to be responsible for the actions of all of his or her direct or indirect reports, part of that responsibility is the duty to promote an atmosphere of compliance. The information presented in this case convinces the hearing panel that (Pitino) fostered such an atmosphere, and specifically never ignored any red flags."

In a news conference Thursday, Denck said, "I think the panel felt that the institution and the coach were hypersensitive to compliance issues coming right on the heels of the prior case. So we did not find it persuasive that they were being too focused on compliance."

While the panel did find that rules were broken in allowing impermissible personnel to take place in team workouts and in the distribution of improper personalized recruiting material, it also found that those instances were "isolated and inadvertent," labeled it a Level III violation and refused to find Mack personally guilty of an NCAA violation.

It did the same on other minor violations alleged against the former coach and his staff. And, like with Pitino, the panel found no basis for a charge that Mack did not foster an atmosphere of compliance.

"The panel views this decision as exonerating both former head coaches," Benck said.

Via Twitter, Mack thanked fans who continue to support him.

"I appreciate the many texts of support I've received today," the coach said. "The cloud that my staff and I operated under during our time at UofL was irreparable in recruiting. As far as the trivial allegations levied against me and our program, today was a vindication in many ways. The deeper meaning for me, though, is that had the separation from UofL not occurred, I never would have had those last few weeks round the clock with my Dad. God had a plan all along and for that I'm grateful. Christi and I wish everyone at U of L all the best moving forward, the fans certainly deserve it after the last 5 years of uncertainty."

5. LOUISVILLE HELPED ITS OWN CAUSE:

Among the mitigating factors the panel listed to Louisville's credit were its handling of matters once the FBI investigation was made public, its history of self-reporting secondary violations, its implementing of systems designed to enhance compliance, and, in this case, the school's cooperation with the Justice Department in its discovery of additional allegations in the pay for play case.

"We provided a plan to the NCA for immediate and strong change within our department, a voice of reason on the allegations, and the need for change on how the NCAA manages penalties globally," Tyra said. "... I would like to think our approach was good for all of college athletics and not just Louisville. The time lag for the decision wasn't ideal and very damaging to the program, but Kenny Payne and our athletic leadership will take it from here and put Louisville back in its place as an elite program. They now have definitive answers in hand. A valuable asset."

Because Pitino and Mack were found to have committed no violations, the panel did not list aggravating or mitigating factors in their cases.

In the end, Benck said, "The panel was intentional in not prescribing penalties that would have a negative impact on the current student athletes."

Enough was enough, he seemed to say.