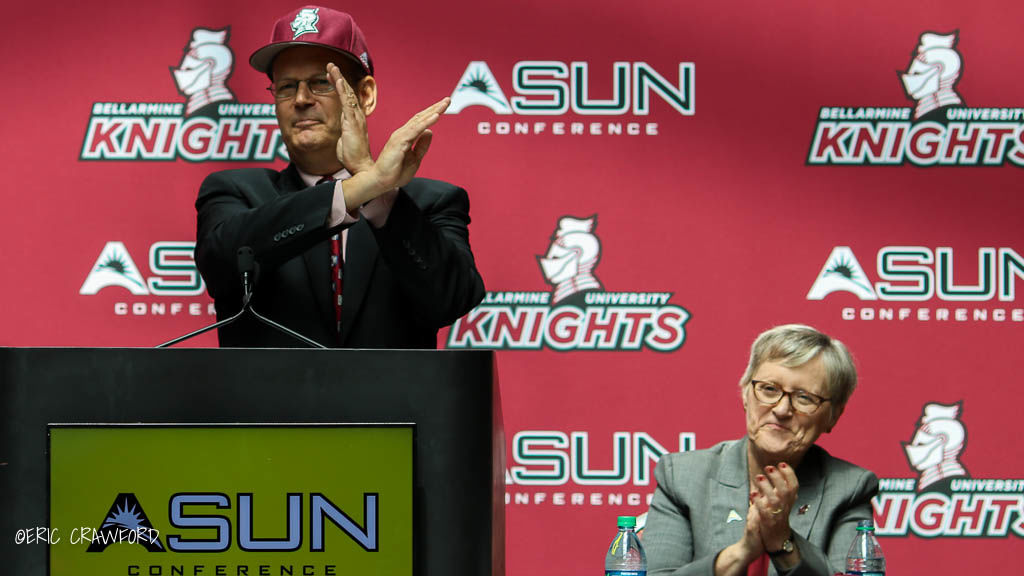 ASUN commissioner Ted Gumbart welcomes Bellarmine to the conference, and to NCAA Division I, as Bellarmine president Susan Donovan applauds during Tuesday's announcement. 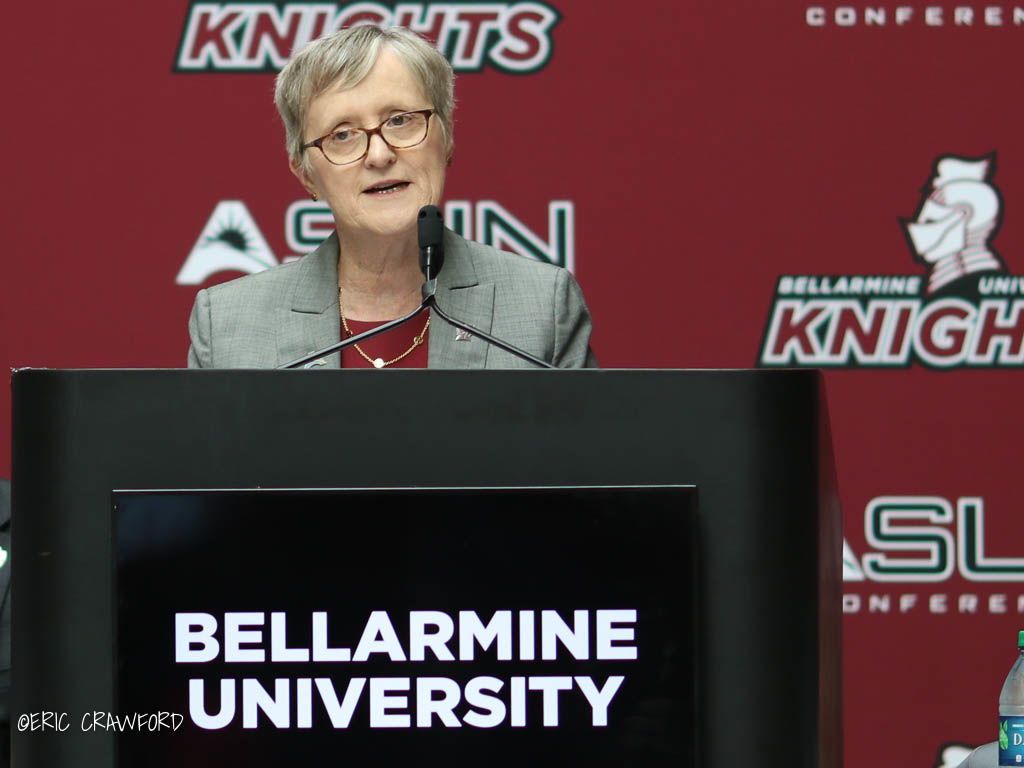 ASUN commissioner Ted Gumbart welcomes Bellarmine to the conference, and to NCAA Division I, as Bellarmine president Susan Donovan applauds during Tuesday's announcement.

LOUISVILLE, Ky. (WDRB) -- This was a great day for Bellarmine. Students hung over the railings in the atrium in Centro's McGowan Hall. ASUN (don’t call it Atlantic Sun) banners hung along the sides of the room. Dr. Susan Donovan, president of Bellarmine, announced “our athletics program will move to NCAA Division I in all sports.” Louisville Mayor Greg Fischer cheered it.

What began as a rainy morning brightened as the news conference progressed. Let the ASUN shine in.

“Bellarmine is going to the show,” Athletic Director Scott Wiegandt said. “In every way, this is the next natural progression.”

For a long time, Donovan said, Bellarmine has been a well-kept secret. She hopes this move will change that. One look at the bank of television cameras, a quick count the media members and outlets in attendance Tuesday, and you can see why. Wiegandt mentioned "the show." That has more than one meaning.

“This move is much more than just athletics,” Donovan said. “As a Division I school, we will be able to share all that Bellarmine has to offer with a larger audience than ever before."

Goodness knows, the move to Division I wasn’t a secret. It can’t be, if you do it right. And Bellarmine did. It conducted internal studies. Its leadership held an extended conversation with students, faculty, alumni and community members. Talks with the ASUN began in earnest just after the first of the year, though the school has been on that league’s radar for a while.

Also not a well-kept secret is the affinity I’ve had for covering Bellarmine’s basketball program and the appreciation I have for Division II sports. I spent the first six years of my journalism career covering Division II.

The first lunch I had after taking my first full-time journalism job, in Evansville, Ind., covering the NCAA Division II University of Southern Indiana, was with the men’s and women’s basketball coaches from that school. Bruce Pearl was the men’s coach, Chancellor Dugan was the women’s. I would wind up covering Pearl winning a national championship and Dugan playing in a Division II national title game.

Dugan is now the coach at Bellarmine. This move is nothing new for her. She coached at a fledgling Division I program, Florida Atlantic. As a Louisville native, she got to watch up close another Louisville native whose program-building skills are legendary in another sport – Howard Schnellenberger. She knows the challenges ahead.

“To be the first, especially that 2020 class, to be the first to play at the Division I level, is going to be huge,” she said. “After that, you talk about getting yourself in a position to play in the NCAA Tournament. After that first year, we’re really going to see where we are, get our feet wet, and put together the best, most competitive schedule we can. Then just be able to play, go down to Baylor, I know Kim (Mulkey), and she’d let us come down and play them. To be able to play on that stage, call down to Florida, FSU — all those teams that now are above us — We can start to knock on that door now and look to be in that conversation.”

Men’s basketball coach Scott Davenport has been in that conversation, too. He was a Division I assistant for a long time. Frankly, without him and what he has built at Bellarmine, this day probably doesn’t happen. He was as instrumental in Bellarmine being in position to move to the ASUN as Rick Pitino was in Louisville being able to move to the Big East.

So while I loved seeing all these folks celebrate, I’m also respectful of what NCAA Division II was and will continue to be. From covering D-II all those years, I can tell you about a level of sport where the players aren’t behind some rope but mingle among the fans. They aren’t set apart as a privileged class of students but are just as worried about the exam they have on Friday as the big game they may have on Saturday. In fact, sometimes more.

This was a great day for Bellarmine. But there have been a lot of great days for Bellarmine in Division II. It’s just that fewer people were noticing.

I was there for the Division II national championship game in 2011. I was in the locker room. I was around the team, at a couple of meals, on the bus. I was with then-president Joseph McGowan after the game. I probably speak for a lot of fans who are happy to see the move but a little wistful at not seeing that opportunity in the future.

But there will be other opportunities.

“We’ve got a great reputation in this community for a lot of things, but one of them is that we love college basketball,” Fischer said. “And Bellarmine coach Scotty Davenport has fueled that love with the wonderful job that he’s done. Here’s what I envision. You remember the 2011 championship run: That was a good year for the city and Bellarmine ... To think about CBS Selection Sunday, to hear the name ‘Bellarmine Knights’ called. To go to that shot of the new Mark Lynn locker room and to see Scotty Davenport, calm and reserved and emotionless while that is made, will be a wonderful thing to see ... This is just a beautiful seed of success that is being planted for Bellarmine and our city today.”

So now, Bellarmine enters a different world. The challenge for the school, and its coaches and programs, will be to rise to the level of their competition without changing what they are and have been. It’s a tough proposition.

It's also a four-year transition. It will mean some facilities changes — improvements right off the bat for baseball and softball and some expansion and suite building in Knights Hall.

Davenport was asked what the difference for him will be between Division II and Division I.

“A letter and a numeral,” Davenport said. “That’s what we’ve been telling people for 14 years. There’s more than one way to be successful in this game. But we will coach and play Bellarmine basketball. With Bellarmine players. That means they are Bellarmine students. Nothing has changed in that regard. Our goals will be the same in terms of every single day we step on the court.”

School officials will have to be watchful lest the arms race of college sports negatively impact the bottom line of the university and its mission. Coaches will be hard-pressed not to cut corners in the name of winning.

But what people might not understand is that all those same pressures exist at Division II. You’re already amid an arms race. You already are competing with institutions that might relax academic standards for athletes.

From Bellarmine’s viewpoint, it doesn’t change much in terms of the challenges, though the competition will be greater. It could change dramatically when it comes to exposure. Yes, the risk is somewhat heightened. The reward, however, could be great.