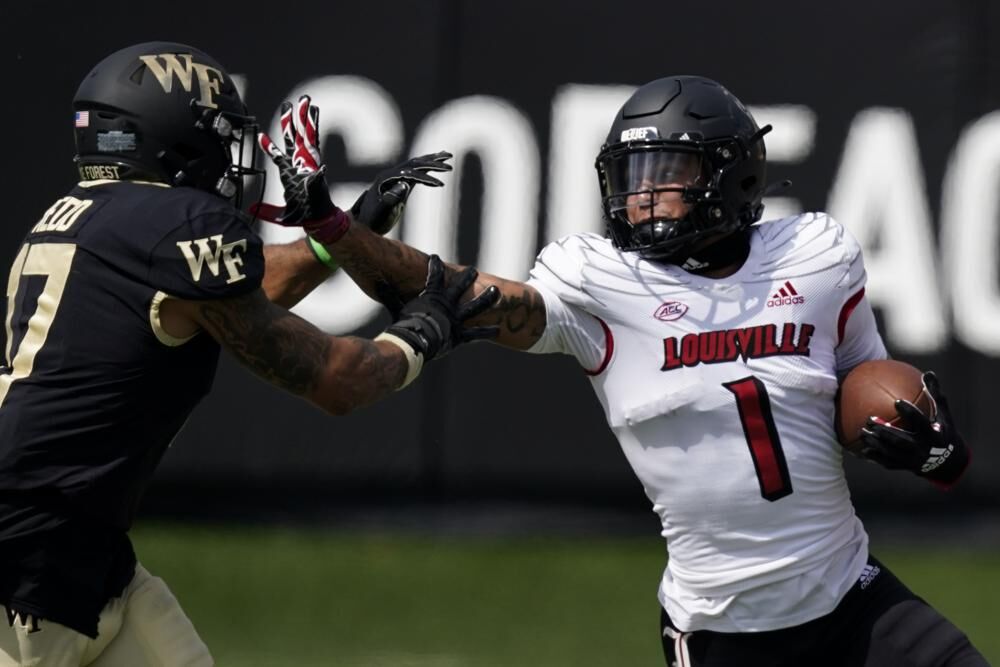 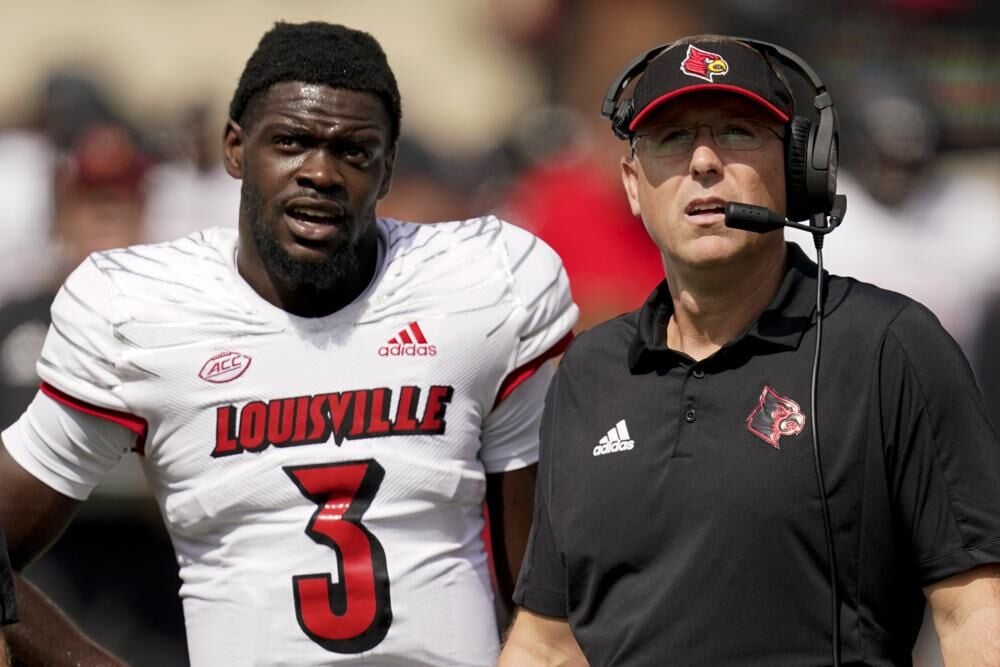 Louisville head coach Scott Satterfield and quarterback Malik Cunningham watch a replay during the first half of an NCAA college football game against Wake Forest on Saturday, Oct. 2, 2021, in Winston-Salem, N.C. (AP Photo/Chris Carlson)
1 of 2

Above all, mistakes were made. Louisville made a mistake when it muffed a punt at its own 10 late in the first half and the game tied at 17. It wasn't perfect. No team ever is.

It missed on a couple of wide-open scoring passes. It missed a 50-yard field goal try. It blew some deep coverages. It lost about 15 seconds late by not calling a timeout more quickly. It was flagged nine times for 93 penalty yards.

Officials made mistakes. They granted Wake too much time at the end of the first half after Louisville's muff gave Wake Forest the ball in good field position. The Demon Deacons, with four seconds left, were somehow able to run the ball up the middle, get stood up, have the play ruled dead and get a timeout in only three seconds, allowing for a field goal with only a second to play.

With Louisville driving to try to take the lead in the third quarter, a 24-yard pass play to the Wake Forest 20 was called back for a block-in-the back against Isaac Martin, who literally had his hands in the air once the defender passed him in an effort not to draw the penalty.

And with Louisville looking to go up two scores in the first half, officials wouldn't let Cardinals' QB Malik Cunningham come back into the game after losing his helmet on a play, though the rules appear to allow for that. Without Cunningham, the Cardinals failed to convert on 3rd and 3 and lost a big opportunity.

Here's who didn't make any mistakes: Wake Forest kicker Nick Sciba, the most accurate kicker in college football. And his excellence made the difference.

For Louisville, it's a disappointing loss but not a disheartening one. Despite a lot of breaks that went the wrong way and a couple more costly injuries, the Cardinals executed well offensively in the first half and came back in the fourth quarter after falling behind 27-17.

"I was proud of our guys," Satterfield said. "We got down 10 in the middle of the fourth quarter, and our guys didn't flinch. We continued to fight and we came back, tied it up. Seemed like whoever had the ball last was going to win, and they drove down here and kicked the field goal. But you know, I think just overall, we made some plays but still left some plays out on the field. Obviously, you strive for perfection, but it's hard to get that. But we had some plays there to score. The turnover right before half obviously hurt. But we thought we held them down at the 10-yard line, and 10 seconds to go, they ran four plays and somehow there was a second left, somehow. And they got three, and that was the difference in the game. That was unfortunate. I hate that. We'll go back and look at it. Even at that, we had chances to make plays, but we just came up a play too short."

Cunningham completed 19 of 26 passes for 332 yards and two touchdowns. He also ran for 46 yards and, for the fifth straight game, carried for two scores.

Louisville piled up 208 yards rushing and 540 yards of total offense. It also gave up 501 yards of offense and allowed Wake Forest to convert 10 of 19 third downs.

Asked afterward about the play at the end of the first half when Wake Forest was granted a second left on the clock to attempt a field goal, Satterfield said he didn't get an explanation.

"Usually, when you run a running play it's going to take a minimum of four seconds," he said. "When you clock the football, it's a minimum of three seconds just to get the ball from the center and clock it. And there's four seconds. They're in the shotgun, hand the ball off, he bounces, I don't how that was only three seconds. But obviously, I'm not working the clock here in Winston-Salem."

Either way, Satterfield said, "There's really no recourse. So it will go down as an L. There's nothing you can do."

He said the message to his team will be to control what it can control and to keep improving.

"In the second half, a couple of penalties hurt us," he said. " ... I'm very frustrated because I don't know what to tell them. We're fighting and we're playing hard and we're getting the calls (against us) and we don't seem to be getting the calls. You can call holding on most plays, let's be honest. A bunch of big dudes in there grabbing and holding. It's just not happening that way. But I can't control that. I can control our effort, how we come out and fight. And whatever happens out here, we've got to play the next play.

"You've got to close games out and you've got to find a way to win them in the fourth quarter. A lot of these games will come down to this ... You've got to be focused and play the whole game, and when the scenario presents itself in the fourth quarter, you've got to make plays. That's the bottom line. It takes everybody. It's not one side of the ball. It's all of us. And that was kind of my message to the team. Go look at yourself in the mirror. You get better as an individual, and we'll get better as a football team."