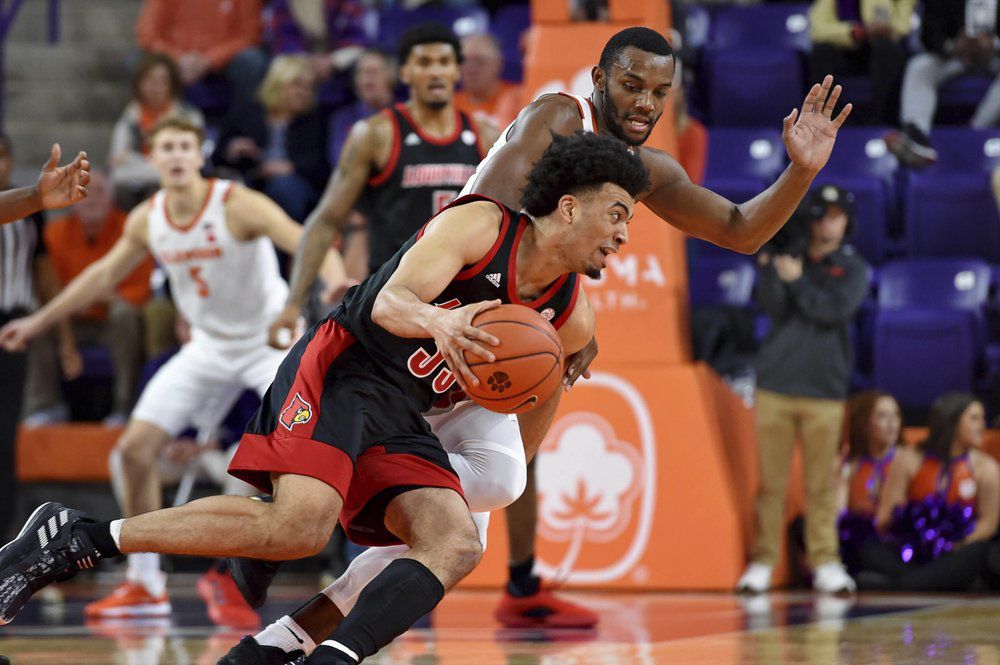 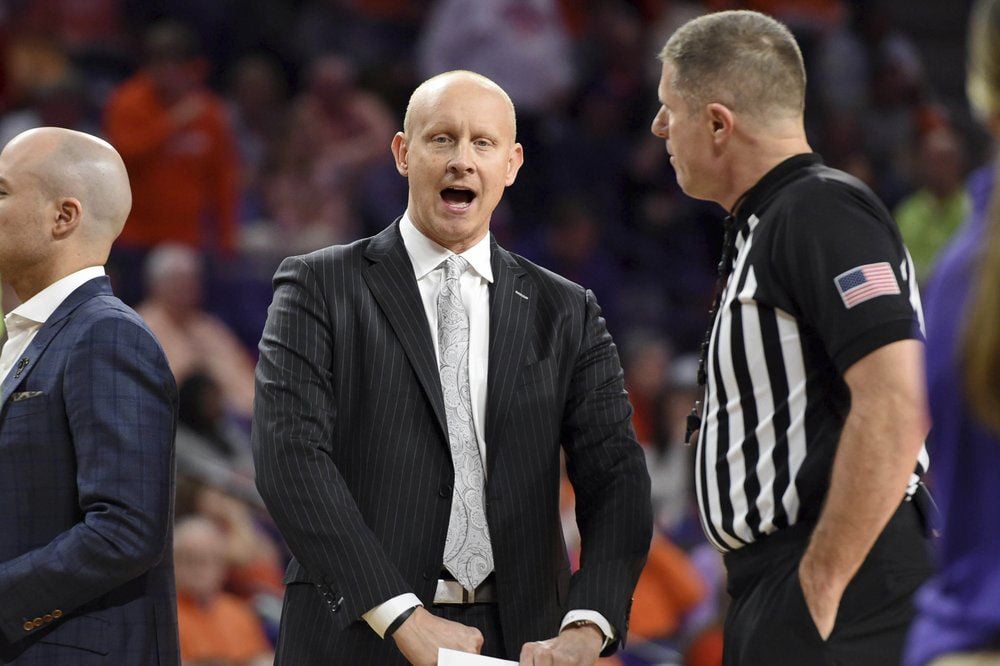 Louisville head coach Chris Mack, left, speaks with an official during the first half of an NCAA college basketball game against Clemson, Saturday, Feb. 15, 2020, in Clemson, S.C. (AP Photo/Richard Shiro) 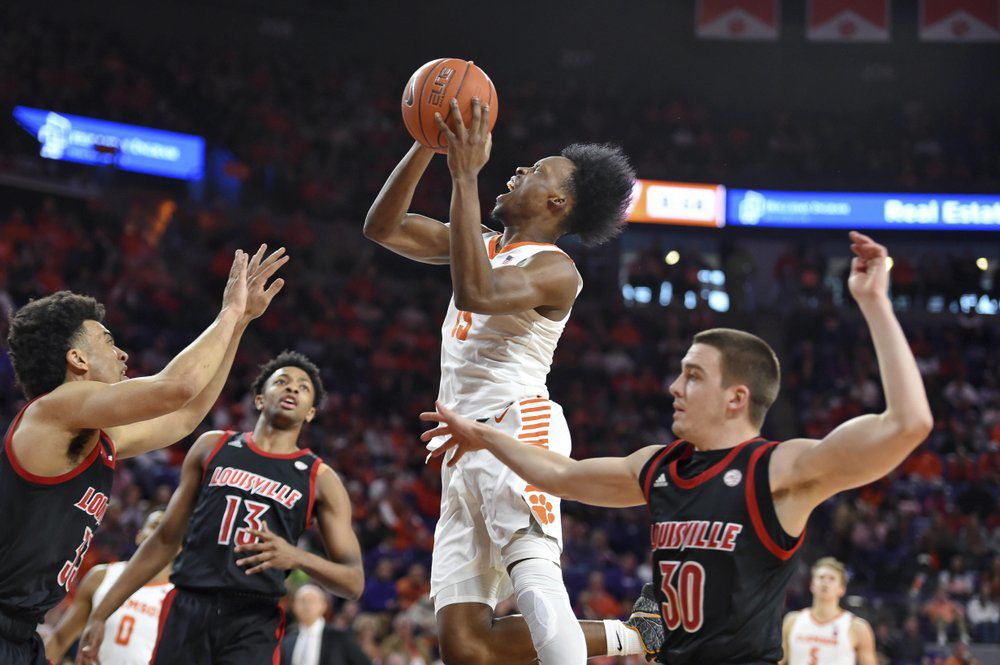 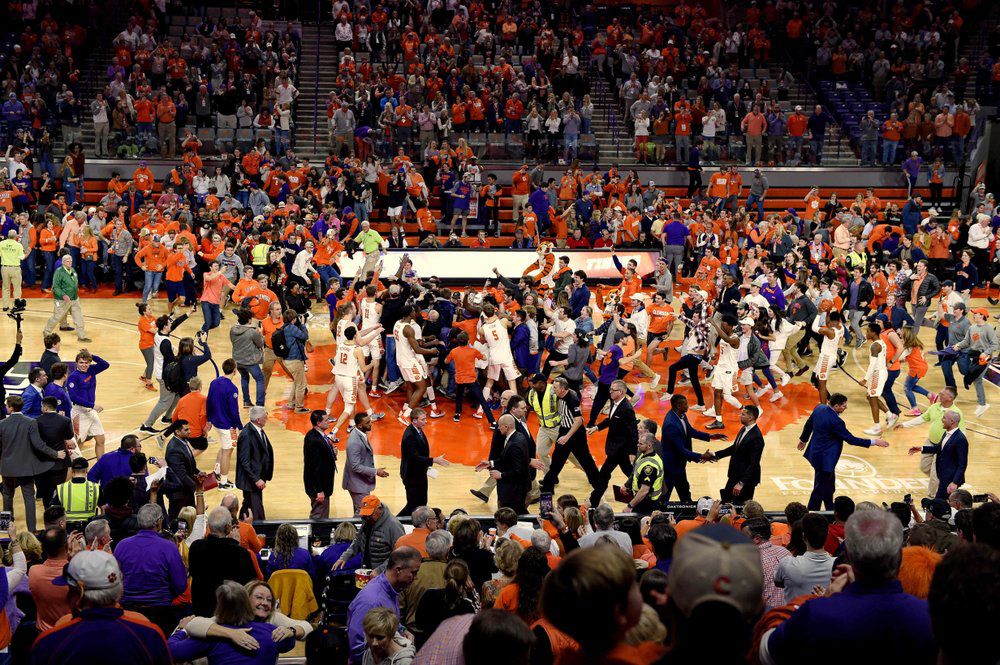 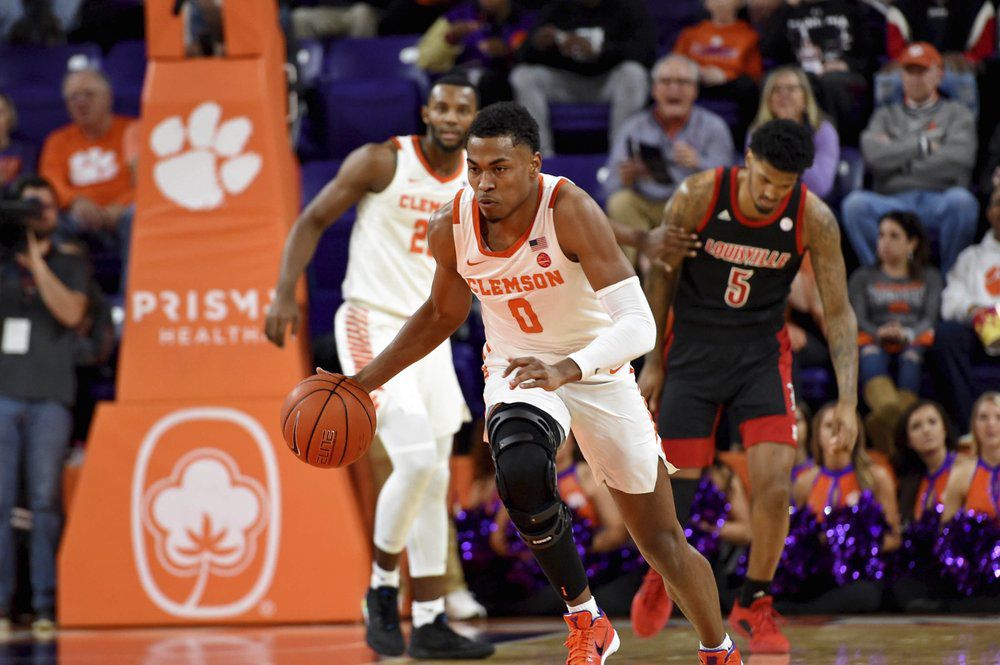 Clemson's Clyde Trapp, center, dribbles after a steal during the first half of an NCAA college basketball game against Louisville, Saturday, Feb. 15, 2020, in Clemson, S.C. (AP Photo/Richard Shiro)

Louisville head coach Chris Mack, left, speaks with an official during the first half of an NCAA college basketball game against Clemson, Saturday, Feb. 15, 2020, in Clemson, S.C. (AP Photo/Richard Shiro)

Clemson's Clyde Trapp, center, dribbles after a steal during the first half of an NCAA college basketball game against Louisville, Saturday, Feb. 15, 2020, in Clemson, S.C. (AP Photo/Richard Shiro)

LOUISVILLE, Ky. (WDRB) – A week ago, the University of Louisville basketball team was coming off an impressive win over conference nemesis Virginia and had climbed to No. 5 in the nation.

After a humiliating 77-62 loss at Clemson on Saturday, the sky may not quite be falling at Louisville, but let’s just say if it were, it would be about the only thing the Cardinals got to fall this week. Unless you’re talking about their national ranking, NCAA Tournament seeding or field-goal percentage.

In short, the Cardinals' shooting too often abandons them. They scored only 14 points in the first half at Clemson, shot just 15 percent, made only two 2-point baskets and fell to their largest halftime deficit since joining the Atlantic Coast Conference.

In the second half, they trailed by as many as 21 early, and just when I got really wound up writing this column, they showed some signs of life, made six straight layups, put together a 10-0 run and cut their deficit to 10 points with 9:48 to play.

Clemson answered with a put-back basket and three straight 3-pointers to reestablish a 19-point lead with 6:55 to play, and that was the game.

Coming off an abysmal offensive performance at Georgia Tech, Louisville was even worse in the first half at Clemson. Chris Mack juggled his starting lineup, pulling preseason ACC Player of the Year Jordan Nwora and inserting freshman Samuell Williamson.

It didn’t matter. The Cards fell behind 22-11, with half of Clemson’s points coming off the Cardinals' turnovers. Dwayne Sutton had 8 points at the half. The rest of the team only had 6.

Nwora, again, was missing in action. He went just 0 for 4 from the field and did not score until going to the free-throw line with 3:29 left in the game and the issue largely decided. He finished with 5 points.

Freshman David Johnson, who many fans have been clamoring to see more of, played 11 minutes in the first half – fourth-most on the team – but was ineffective. The second half was a different story. He had three assists in his first three minutes of action and was a key player in the 10-0 run.

But Louisville couldn’t take advantage of its run, and Clemson started draining 3s to maintain its advantage.

"It’s hard to feel like you’re in the game if you make five field goals in a half," Mack told Demling. "We talked about chipping away (in the locker room), and Clemson comes out and wins the first 4-minute segment 7-4. … Nothing different from other games we’ve been in of late. . . . If you get down double-digits with 8-9 minutes left in the game, if you’re not locked in on a possession, the game can go the wrong way. For them to hit a contested three is one thing, but giving up a wide-open three (after cutting the deficit to 10) is something else."

Clemson made 6 of 13 from beyond the arc in the second half, while Louisville connected on just 6 of 26 in the game.

"I thought Clemson’s physicality on the defensive end bothered us," Mack said. "It pushed us off our spot. We weren’t strong with our straight-line drives. We drove the ball in defending fashion, and that had a lot to do with our rushed shots. On the other end, I thought their offense was moving much faster than our defense, which is frustrating."

Sutton finished with 18 points to lead Louisville. Johnson, with 12 points, was the only other Cardinal in double figures.

Statistically in the second half, the Louisville offense was better. Louisville shot 51.4 percent from the field and outscored Clemson 48-46. But it was this kind of game: Trailing by 12, Nwora pulled down a defensive rebound, took off with it on the dribble, and dribbled it off his leg out of bounds.

The game ended with Clemson fans chanting "Over-rated." After the week Louisville has had, it's tough to argue.

Mack and his players have a good bit of work to do to put this back together. They've lost back-to-back games against mediocre teams. It doesn't inspire confidence for tournament time, and this is a team in dire need of confidence, just one week after it looked poised to make a championship run in the ACC.

"I don’t have all the answers right now," Mack told reporters after the game. "I just don’t. It’s my job. We’ll watch film. I’m going to have a lot of one-on-one conversations, and we’ll figure out a way to be better against Syracuse on Wednesday.”