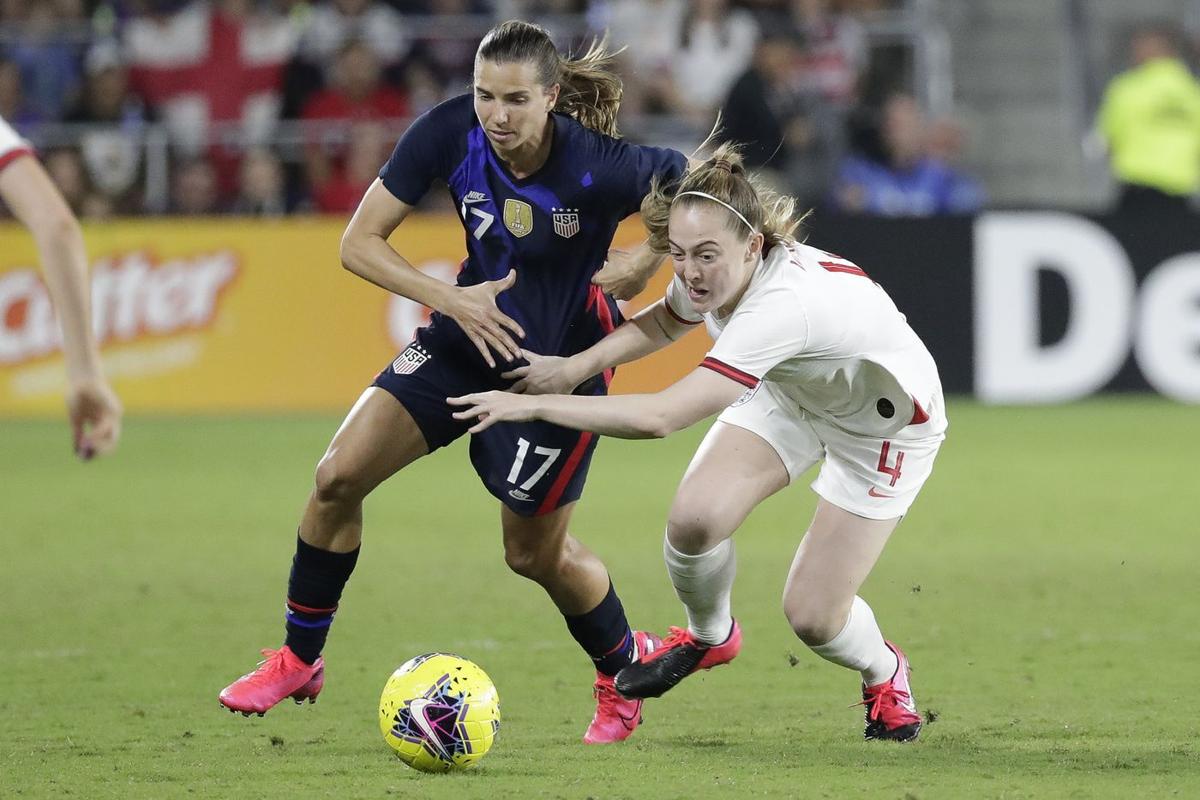 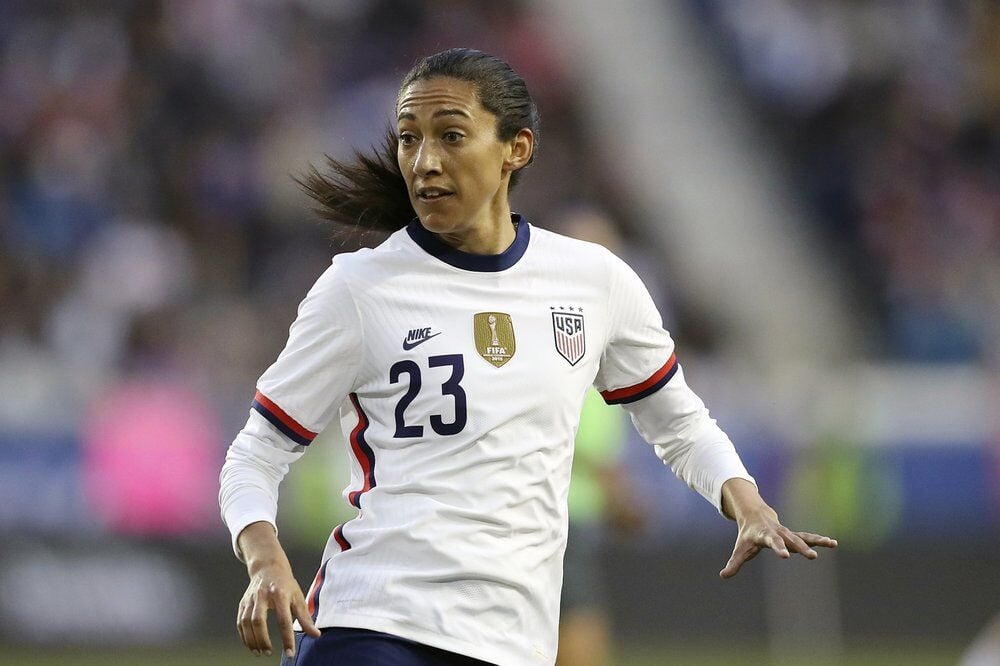 FILE - In this March 8, 2020, file photo, United States forward Christen Press looks for a pass during the second half of a SheBelieves Cup soccer match against Spain, in Harrison, N.J. Press says she wants to honor Kobe Bryant by playing for Manchester United wearing a No. 24 jersey. The American's usual No. 23 was already taken when she signed for a season with the English club earlier in September, 2020. (AP Photo/Steve Luciano, File)

FILE - In this March 8, 2020, file photo, United States forward Christen Press looks for a pass during the second half of a SheBelieves Cup soccer match against Spain, in Harrison, N.J. Press says she wants to honor Kobe Bryant by playing for Manchester United wearing a No. 24 jersey. The American's usual No. 23 was already taken when she signed for a season with the English club earlier in September, 2020. (AP Photo/Steve Luciano, File)

LOUISVILLE, Ky. (WDRB) – First there was a team, then an administration, then a name (took a while), then colors, logo, a coach. And now there are players. Racing Louisville FC mined the National Women’s Soccer League expansion draft for 14 selections Thursday night, including two standouts from the U.S. Women’s National Team.

The club will play its first season in the nation’s top professional women's soccer league in 2021. It took the rights to forward Tobin Heath from Portland Thorns FC with the 13th pick and to forward Christen Press from Utah Royals FC with its final pick of the night.

Both are playing in England for Manchester United Women, a club that leads the FA Women’s Super League standings after six games this season but took some criticism from American soccer star Megan Rapinoe this week for being so slow to revive its women’s side, which was scrapped in 2005 and didn’t return until 2018.

"Women’s football in England is the same as in America. It’s so far behind because of what we’ve had to overcome in the lack of investment," Rapinoe told the BBC. "It’s 2020. How long has the Premier League been around? And we’re only just seeing a club like Manchester United put effort and pounds towards a women’s team? Frankly, it’s disgraceful."

Be that as it may, the club is having success now, and there’s no guarantee Tobin or Press will return to the states to play. Their season in Europe runs through early May.

Louisville could’ve pocketed $150,000 by not selecting a U.S. Women’s Soccer "allocated" player but instead took the limit of two, which is a roll of the dice but could pay off big.

They weren’t the only players competing internationally on head coach Christy Holly’s list. The club also took Caitlin Foord from Orlando, whose rights were transferred while playing for Arsenal of the FA WSL, and Alanna Kennedy, who is on loan to Tottenham Hotspur.

Racing Louisville FC has sold around 3,000 ticket tickets for its inaugural season. Visit RacingLouFC.com/tickets or call 502-568-2489 during regular business if interested in purchasing tickets.

Below are short bios of the expansion draft picks, prepared by Racing Louisville FC.

Holding the University of Kansas’ school record for minutes played at 2,278, Merrick appeared in all of her college matches. The Missouri native was also a key contributor to the Jayhawks’ 2019 Big 12 Championship, earning all-conference first team and defender of the year honors. Merrick made her NWSL debut in the Challenge Cup after she was selected 28th overall in the college draft.

The University of North Carolina product, via New Jersey, helped the school advance to the 2018 national title game as a senior. She was selected sixth in the 2019 college draft and played overseas in Sweden and Australia before OL Reign acquired her rights in January. Ashley received multiple U.S. U-23 call ups on her way to a professional career.

The native of Ghana is a newcomer to the NWSL having joined Sky Blue on a short-term contract for last summer’s Challenge Cup. She brought seven years of international experience to the club, including her 2015 title as Ghana’s Female Footballer of the Year. Cudjoe moved to the NWSL after three all-star seasons for Asheville City SC of the WPSL.

The Kansas native left Ole Miss the school’s career leader in goals (48) and points (119) having also won the 2018 Senior CLASS Award recognizing student-athletes who make a positive impact in their communities. First-Team All-SEC in 2015, 2017 and 2018, Kizer then joined the Houston Dash, where she logged 61 minutes en route to the club winning the Challenge Cup’s final. She’s on loan in Norway through December, with her stint including a top-shelf goal scored back in October.

After three years with Texas Christian University, Lund transferred to Arkansas for her final collegiate season, earning All-SEC Second Team honors having posted 11 shutouts in 23 games and leading the conference in save percentage (0.871). The Texas native is versatile having also scored 56 goals during her high school career. She is awaiting her NWSL debut.

An Australia native, Kennedy is currently on loan to Tottenham Hotspur in the FA Women’s Super League from Orlando, where she has played since 2017. Kennedy, also a member of her home country’s national team, has appeared in two World Cups, helping Australia advance out of the group stage in 2015. She can play in the midfield as well as on the back line and often takes set pieces for her clubs.

A four-year starter at Colorado College, Milliet went 14th overall to the Courage in the 2019 NWSL College Draft. She made two appearances as a rookie before getting more involved in 2020, most recently logging 278 minutes in four NWSL Fall Series appearances. Going back to her senior season, she led her school with 17 points, combining six goals and five assists.

On loan playing for Paris FC in France’s first division, Riehl is in her first professional season having been drafted 11th by Sky Blue after starring for Penn State University. She started all 25 games in 2019 as a redshirt senior for the Nittany Lions and left the program as the NCAA’s all-time leader in minutes played for a position player with 8,847. She has also represented U.S. Soccer at the U-18, U-20 and U23 levels, plus was called into a senior team camp in 2019.

Foord is currently signed with Arsenal of the FA Women’s Super League in England. Should she return to the NWSL, Racing Louisville FC has her rights. A member of the Australian National Team, Foord represented her country in the World Cup as young as age 16 in the 2011 World Cup. During her globetrotting career, Foord has played within the NWSL for Sky Blue and Portland Thorns; Orlando acquired her rights in January.

A third-team All-American in her final season at Kansas University, McClure led the Big 12 Conference last year in goals (17), points (43) and game-winning goals (7). The Spirit selected her with their third-round pick in the most-recent college draft, and McClure made six appearances as a rookie across the Challenge cup and Fall Series.

Signed by Sky Blue FC following a 2016 open tryout, the New Jersey native Simon was later picked up by West Ham United ahead of the distinguished English club’s entry to the FA Women’s Super League. Having returned to the NWSL earlier this year, Simon appeared in five Challenge Cup games for the Dash en route to the club’s title, starting three of those.

A New York native who attended the University of Georgia, Betos continues to rank high on the school’s lists for career shutouts (26) and wins (48). Having entered the NWSL in 2013, Betos was named the league’s Goalkeeper of the Year in 2015, a season in which she earned the distinction of becoming the league’s first keeper to score a goal while with the Portland Thorns. Betos finished 2020 on the season-ending injury list after she underwent knee surgery; she is expected to be back for the start of the 2021 season.

Heath, a New Jersey native, won three national championships at the University of North Carolina before her USWNT debut in 2008. Since then, she has been part of two World Cup-winning sides and in 2016 set the NWSL record for most assists in a season as a member of Portland Thorns FC.

A California native and Stanford University alum, Press is the former Women’s Professional Soccer Rookie of the Year who has registered more than 100 caps since making the USWNT in 2012. Collegiately, she remains Stanford’s assists leader. Professionally, Press ranks fifth on the NWSL’s all-time scoring list.