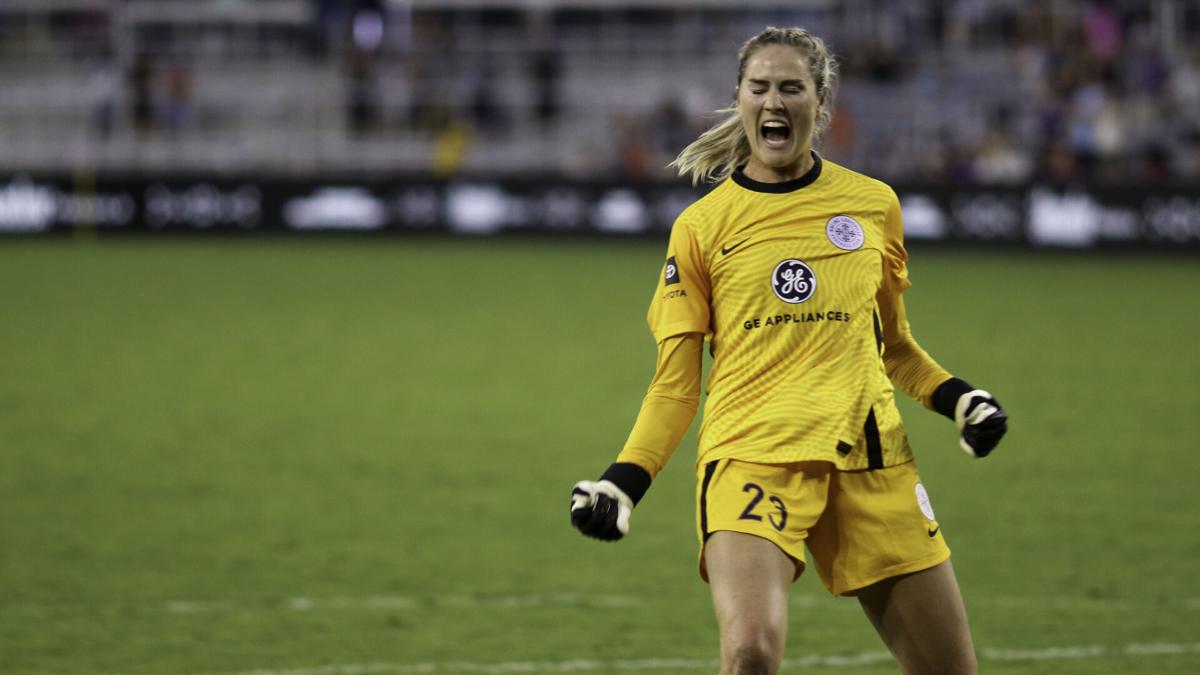 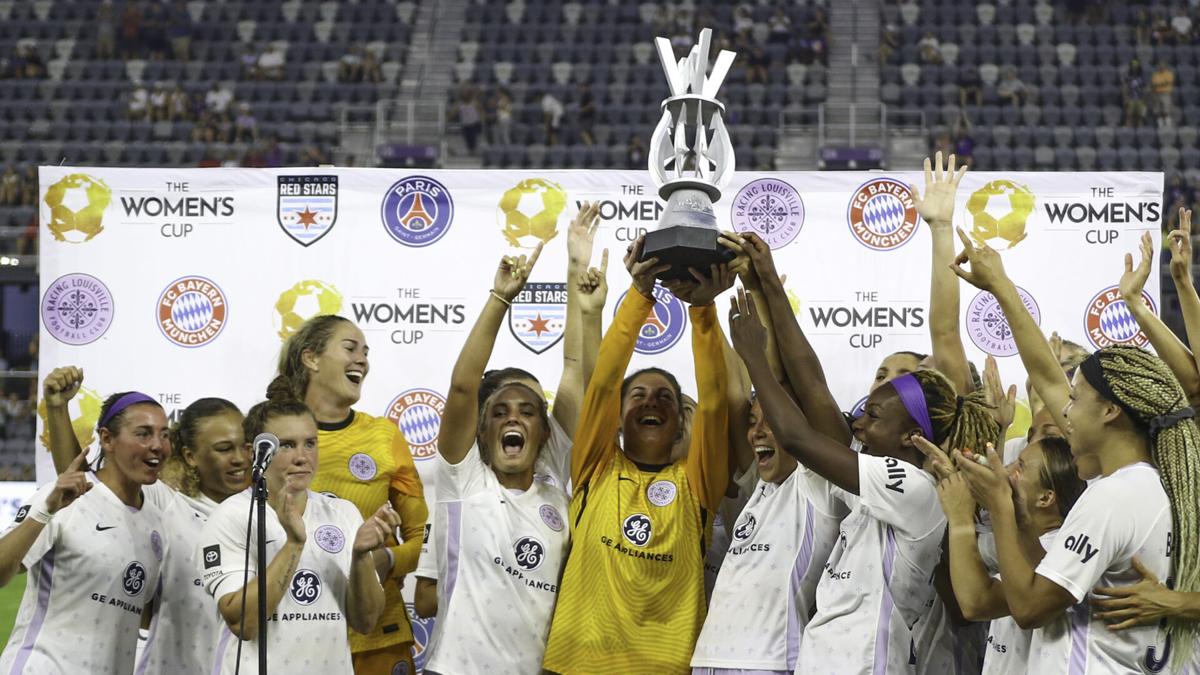 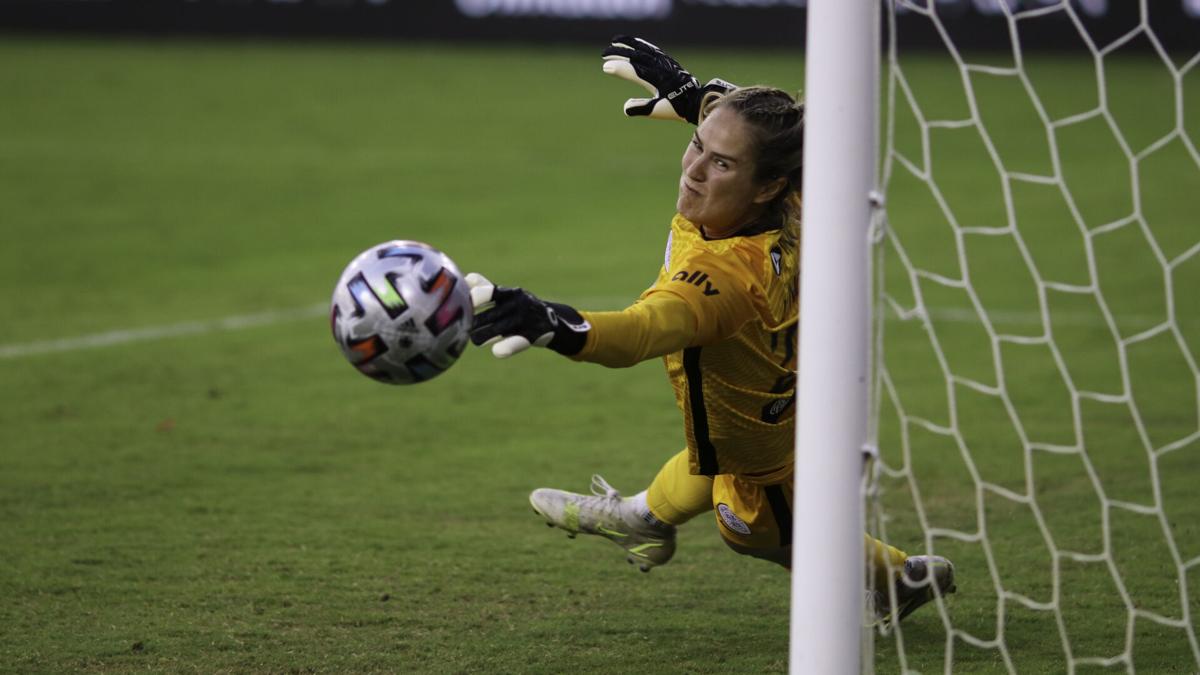 Racing Louisville FC's Katie Lund saves a penalty kick in the club's victory over FC Bayern Munich in the championship game of The Women's Cup.

Racing Louisville FC's Katie Lund saves a penalty kick in the club's victory over FC Bayern Munich in the championship game of The Women's Cup.

LOUISVILLE, Ky. (WDRB) – Sometimes, you can just feel when a win is historic. You know that it can be a springboard to other things. The meaning goes beyond the score. It's not that the game was won, but how it was won.

You could call Racing Louisville FC's victory over FC Bayern Munich in the inaugural championship game of The Women's Cup on Saturday that kind of win.

In the bigger picture, both clubs kept the game in perspective. In fact, neither put their top squads on the pitch. The only Louisville regular starter in the lineup was goalkeeper Michelle Betos.

But it wasn't the way the game started that elevated how this game will be remembered around Lynn Family Stadium. It's how it ended.

Tied 2-2 and forced to penalty kicks by tournament rule, the teams remained tied after exhausting 10 PK spots. Then it came to the goalkeepers. Katie Lund, who had entered the game in the second half for Betos, who was experiencing a bit of dizziness., stepped to the penalty spot and calmly crushed her kick into the back of the net.

Then, even more difficult, she went back to her place in goal and stopped a kick from her opposite number to give Louisville the win, 7-6 . She not only had netted the game-winning penalty, she saved four opposing tries.

After Racing won on penalties on Wednesday night, Betos said, "You go in hoping to save one. If you save two, you're pretty good. If you save three, you're a hero."

What do you call saving four? In a game where you're playing your first professional minutes. Super hero?

"I was just there to do my job," said Lund, a 24-year-old who played at both Arkansas and TCU in college and was acquired by Louisville through the 2020 NWSL expansion draft. "Kids dream about this. To have this moment as a pro debut, I couldn't be more grateful. I'm so grateful to (coach) Christy (Holly) and the whole staff for allowing me to play tonight and to Michelle for setting it up for me. It hasn't hit me yet."

From the looks of it, the win hadn't hit a lot of people. The Racing Louisville players embraced Lund, then each other, then The Women's Cup trophy, Betos hoisting it as confetti fell around them. FC Bayern, the German Champions who already had won the French Cup in their preseason, were denied another one, but watched politely and after the presentation took a lap to applaud the Louisville fans, 7,813 of them who turned out.

It's not the kind of thing you expect of an expansion team, especially not one in the midst of a stretch of five games in 15 days. Team president Brad Estes shook his head.

"I'm so proud and happy for the whole organization," he said. "This is one of those moments that shows you what is possible. Our fans were great, and we're only just beginning."

Holly, who took a conservative approach to save many of his starters and not overwork them, smiled when asked about the accomplishment.

"As a coach I’m stoked,” he said. “Every single one of them from start to finish was absolutely first-class players, role models, people, and we’re so proud that they’re attached to this club and this city.”

The win was set up by a couple of big second-half goals by the home team. Jorian Baucom stepped in to intercept a Bayern pass and beat its goalkeeper to give Racing Louisville its first goal and tie the game at 1-1. Yuki Nagasato then snatched a long cross from Lauren Milliet and connected with it on a lunging attempt that grazed the crossbar and into goal.

Bayern scored in stoppage time to set up the late drama.

“In the last two months Katie Lund has turned things up a notch and we wanted to get Katie in there,” Holly said. “We wanted her to play. We wanted her to get that chance. This platform — and my goodness, she stepped up. She got what she deserved.”

You could say that for the new franchise, which has had all the kind of glitches you'd expect, more goals given up in stoppage time than you can keep track of, building on the fly, settling for draws when victory was in their grasp.

This is the kind of game, a victory snatched from a big-name in global football, that can breed confidence and show players that good things can come from tall challenges. At some point, the good expansion franchises turn corners and the draws start to become close wins. That may yet be a ways off for Racing Louisville, but on an improbable Saturday night, some surprising heroes provided a good glimpse of what it looks like.

That's not a bad way to win a franchise's first trophy.