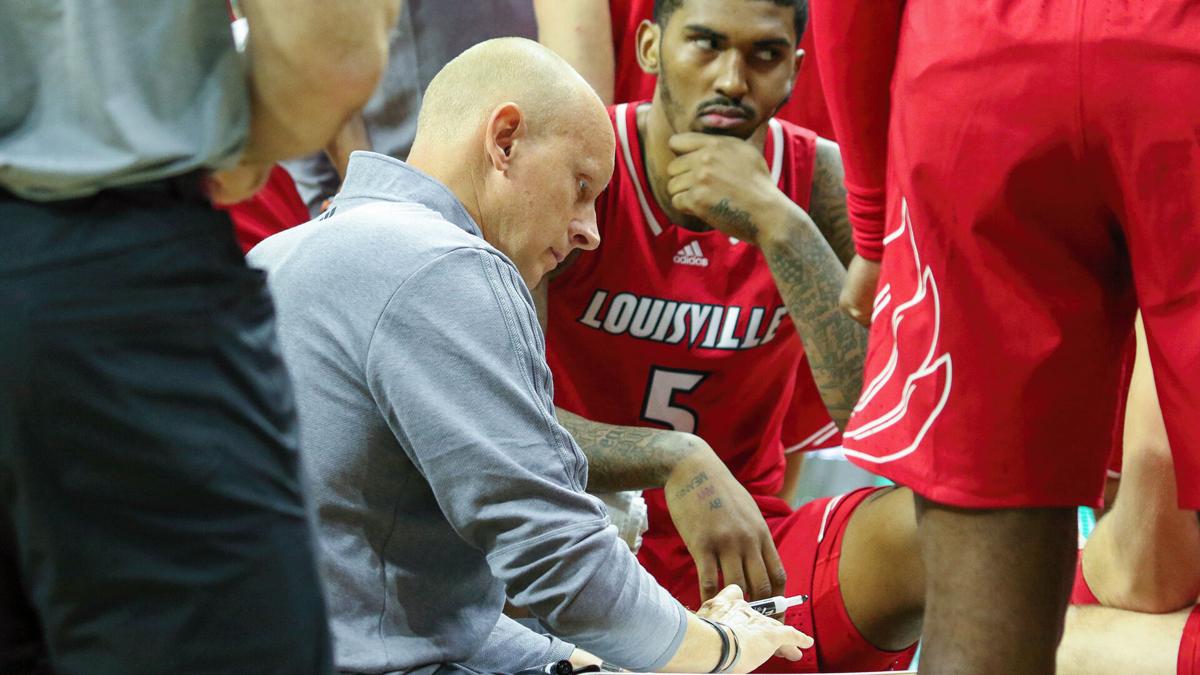 Louisville coach Chris Mack talks to his team during a timeout in a loss at Michigan State. 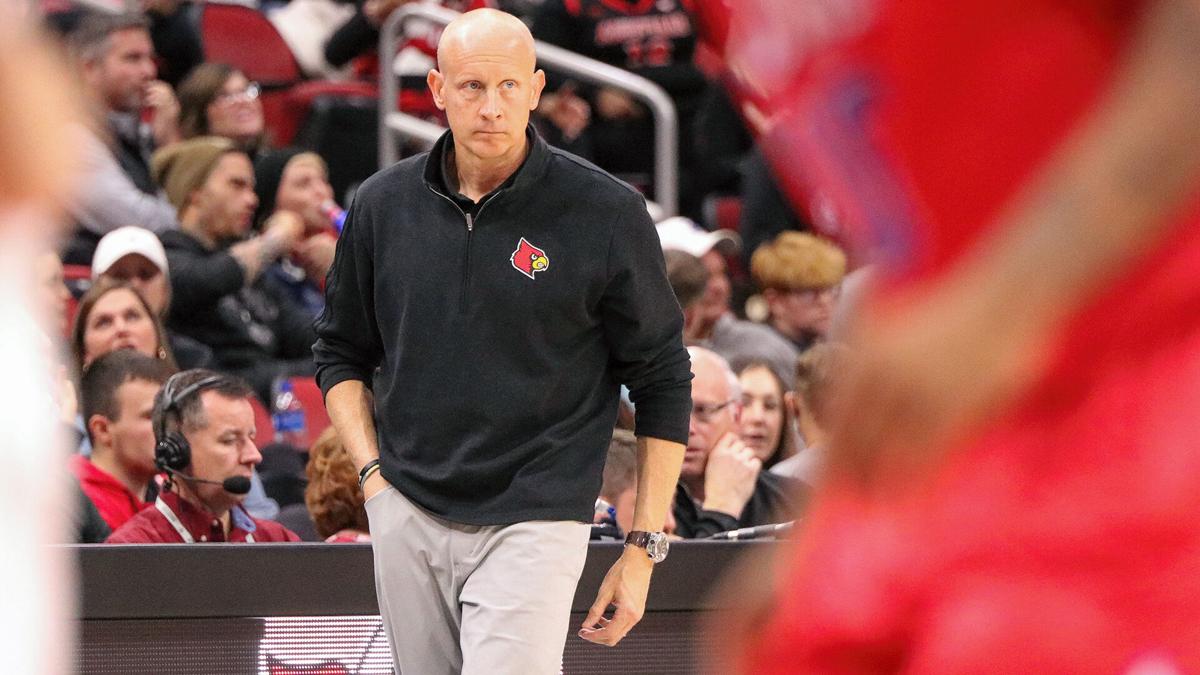 Chris Mack watches his team from the sideline during an exhibition victory.

Louisville coach Chris Mack talks to his team during a timeout in a loss at Michigan State.

Chris Mack watches his team from the sideline during an exhibition victory.

LOUISVILLE, Ky. (WDRB) – I wasn't at Chris Mack's news conference on Tuesday. I was on First Responder Bowl duty, and there's only so much one journalist can take.

But I have to say, upon reviewing the video, I felt a bit for the Louisville basketball coach, whose team went on a COVID pause on Dec. 20 and only returned on Dec. 26, though not at full strength.

For eight minutes, Mack sat there and answered questions like he was Dr. Anthony Fauci. He should've worn one of those long white coats and a stethoscope. Not to make fun of the deadliest pandemic in the nation in a century, but at long last, he finally had to remind the assembled media that he is, in fact, a basketball coach.

His Cardinals return to action Wednesday night in ACC play against Wake Forest at the KFC Yum! Center. Tipoff is set for 8 p.m.

"You want to keep asking about masking and protocols and all that stuff?" he said. "We can keep going down that line, but it's really, like, nauseating at this point. You know, we're in season three, college basketball dealing with this, and I know it's everybody's job to talk about it, but it's, you know, seeing 'entering protocol' on your timeline over and over and over, like, let's talk about the game."

Mack is done with it, to put things bluntly. Except that you can't be done with it if guys keep catching it and your team is compromised and games are being postponed or outright canceled.

Mack answered a variety of questions on the topic. I wish he could've been more specific in terms of how many guys were sick and for how long and who is still struggling. That's the kind of information that would be useful to people, not just from a sports standpoint but in understanding the whole evolving virus situation. But he couldn't do that, for legal reasons.

What he did try to say was that people are going to get this, and particularly young people. It's just happening. All of them vaccinated, some of them with boosters, some not, and none of them particularly sick, but some a little sicker than others.

A change in CDC protocols will allow players to get back to action sooner, in most cases.

What Mack didn't say is that, as a basketball coach, he has about as much say in who does or does not come down with this as he does in a player's willingness to make the extra pass or not break off the offense to improvise. That is to say, he has some say, but not the ultimate say, and more with some players than others.

The virus has sidelined the teams of first-year head coaches and Hall of Fame coaches and it's likely to keep doing so for a while longer.

Mack's bigger worry is getting the Cardinals where they need to be in terms of basketball, which is shaping up as a big enough challenge. When we last saw the team, it was losing to WKU by 10, playing without Malik Williams, who has since returned.

"I think as a coach, you know, what you want is consistency," Mack said. "I think I've said this before. You've got to know what to expect when a guy either enters the game or starts the game. And that's been the head-scratching part, is the consistency of a few of our guys. Each of them have strengths and talents and weaknesses, and, you know, maximizing those and being consistent is the key to extending time and getting more time. Coach can trust you. He can rely on you and knows what he's getting when he puts you in the game."

Asked if there are some players who are better in practice than in games or vice, versa, Mack answered: "I think the performance of it being inconsistent or consistent is relatively consistent in both areas, if that makes sense."

On second thought, maybe we should go back to talking about COVID.

Mack said he doesn't know whether the Kentucky game will be rescheduled, but that he's hoping that between virus exposure and the booster shots, the program will be able to avoid future pauses. He did shoot back on the murmurs that his program had ducked the game. Kentucky went on to beat WKU by 35 in a hastily scheduled matchup.

"To hear that we didn't want to play Kentucky or we ducked them, I mean, it's like, we have bigger problems than that," Mack said. "We have guys that can't practice for eight or nine days. You know, it's a really good NET game for us. It's an incredible rivalry. Guys get really juiced to play the game. But, you know, we weren't able to, and I don't know, in terms of like making it up. I looked at their schedule as soon as this was sort of on the horizon about not playing the game and the only break they had during their conference season, they had a game scheduled with Kansas. So it really is going depend on games that we get that we lose because of other people having COVID. Same thing with UK, and being able to materialize that game in such a short notice. And if we can, we will. But I don't know. If you're asking for a percentage. I have no idea."

Coming off its pause, Louisville will face a Wake Forest team that is 11-1 but which has not played a very solid schedule. A year ago, the Cardinals suffered a pair of sizable blowout losses coming out of pauses, and Mack is hoping circumstances – and results – differ this season.

"I think back to when we played Wisconsin, and we didn't have arguably the best player in the league, Jae'lyn Withers, you know, played like six minutes," Mack said. "He was exhausted. It's just getting our guys back in shape is the biggest challenge that you have. And you try to speed that up as much as you can. You know, we practiced hard on Sunday night, we practiced twice (Monday). We're not going to go twice the day before the game, but just trying to get our guys' wind back as best we can. That'll give us the best opportunity to be very competitive against a good Wake Forest team. And make no mistake we're playing to win. And I believe that we can, but we're going have to play really well. And we didn't play well in those two experiences that you mentioned a year ago. Those were a lot different circumstances than what I think we're dealing with now."