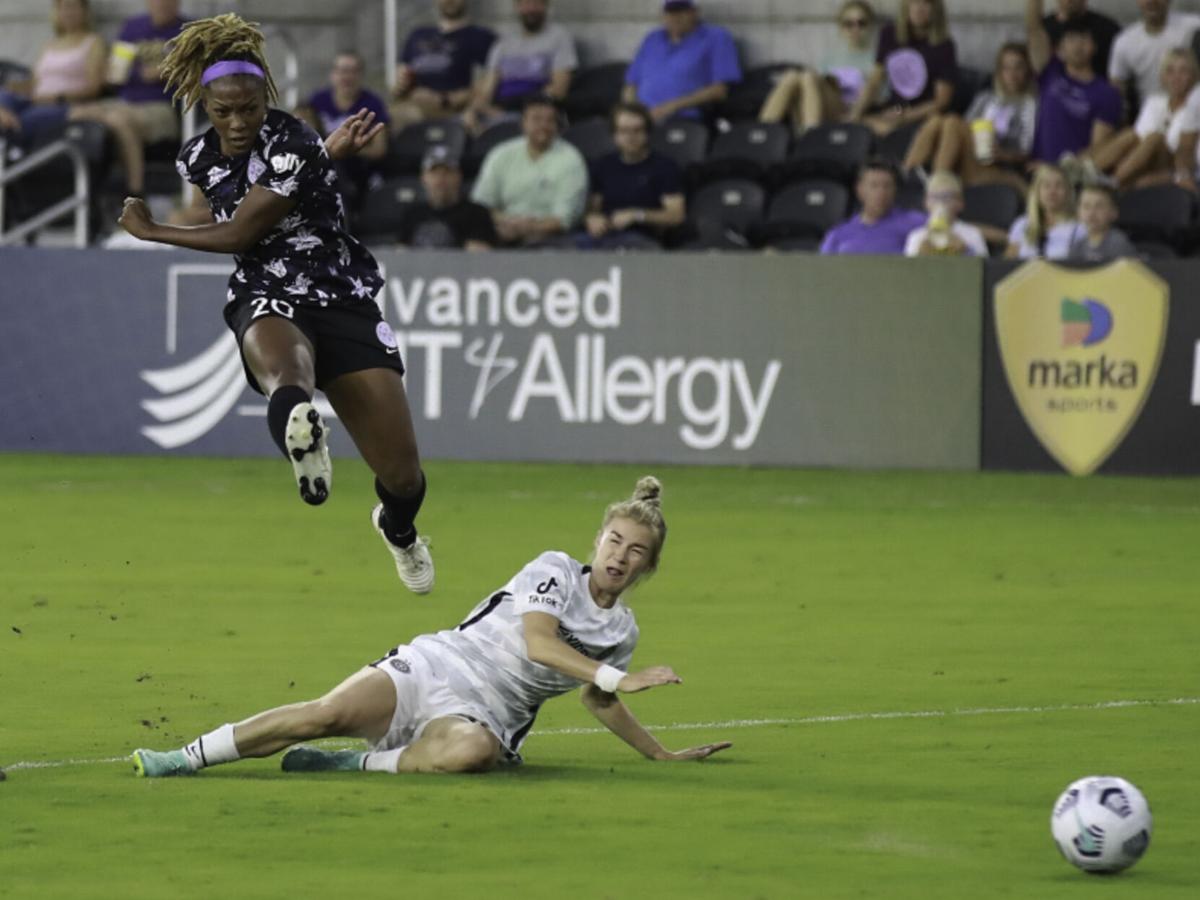 Racing Louisville's Cheyna Matthews takes to the air in the team's 2-0 loss to Portland. 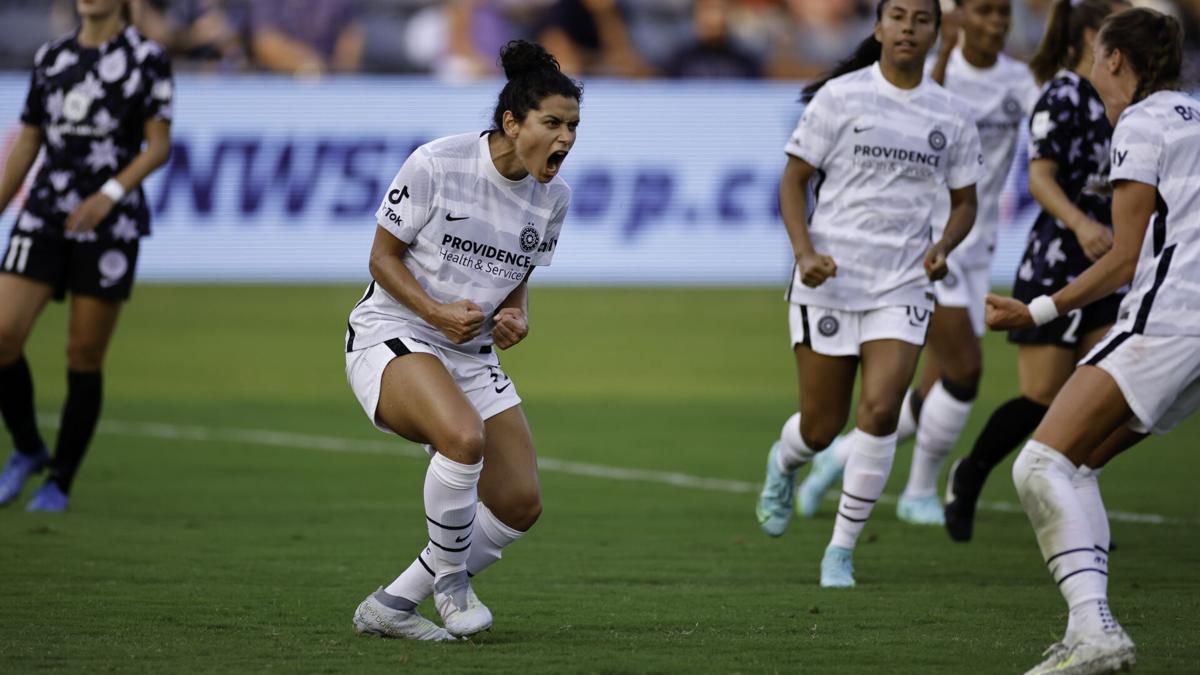 Portland's Rocky Rodriguez celebrates a score on a penalty kick in the first half of a 2-0 Thorns victory over Racing Louisville FC. 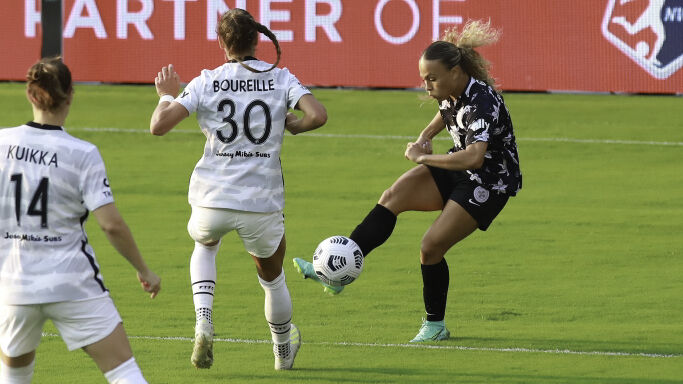 Racing Louisville's Ebony Salmon gets off a shot early in the team's 2-0 loss to Portland.

Racing Louisville's Cheyna Matthews takes to the air in the team's 2-0 loss to Portland.

Portland's Rocky Rodriguez celebrates a score on a penalty kick in the first half of a 2-0 Thorns victory over Racing Louisville FC.

Racing Louisville's Ebony Salmon gets off a shot early in the team's 2-0 loss to Portland.

LOUISVILLE, Ky. (WDRB) – If the theme, win or lose for Racing Louisville FC, is “progress,” then it probably would be measured in the smallest of units for Saturday night’s 2-0 loss to Portland Thorns in Lynn Family Stadium.

A month ago, Racing took a trip to Portland in which everything – from the short prep time to the travel to the late-night start to conceding a goal just 8 minutes into the match – went wrong in a gutsy 3-0 defeat that earned the praise of coach Christy Holly in any event.

On Saturday, the home-field matchup was more advantageous for Louisville. Portland was without five players called up for Olympic duty. Louisville had added striker Ebony Salmon since the last meeting, and gotten some other players healthy. Racing was coming off a 3-0 win at Chicago and had nearly a week to prepare.

The result, however, wasn’t all that dissimilar – though if you look inside the numbers, you’ll see some improvement. After being outshot 28-4 without a shot on goal in the first meeting, Racing generated good chances early in the game and early in the second half despite being outshot 17-9 overall and 7-4 in shots on frame. Racing’s possession crept up three percent, to 43.2 percent.

While Holly would like to have seen better against a roster that had been razed of its top performers, he also knows that the Portland players Racing did face are high quality, and the team, now after the win, shares the top of the NWSL standings with Orlando (who is Louisville’s opponent next Saturday).

“I don’t think we really ever got our stride,” Holly said. "But we started the game well, created a couple opportunities, then we kind of got a little bit lost within the game. Portland, started to gain a little bit of control in defining moments within the game, and so we have to look at ourselves and find out what we can do be better. Nothing changes. We’re not fooled by looking at results. We’re more focused at looking how we perform in the games.”

Holly said he didn’t feel like Racing was as effective in transition on Saturday, and that he’ll have to take a look at the video to figure out why. He said the team had a good week of preparation, and a good attitude coming off a 3-0 victory.

“We felt the attitude was right,” Holly said. “Listen, we’re under no illusions that it’s an easy league or that it was going to be an easy night. But we understand what we’re up against. And we know that we definitely want to be better than what we did tonight. There was some good, but there’s so much more to this team than what we saw tonight. There was moments in the start of the first half I thought was bright, energetic, good connection, and that’s something to be happy about. I thought our transitional play was not our strong point tonight. We just didn’t click on that.”

Louisville generated more good opportunities in the first 20 minutes on Saturday than it did in an entire game a month ago, but after an early missed attempt by Ebony Salmon it struggled to get her more involved in front of goal.

A Rocky Rodriguez penalty kick in the 30th minute, after a foul on Yuki Nagasato in the box gave Portland its only score of the first half. In the second, Nagasato didn’t convert in front of the goal in the opening minute, and Simone Charley scored six minutes later to put Portland in command.

The closest Louisville came to inching back was a Savannah McCaskill shot that hit the right post in the 75th minute.

Holly remained upbeat about his team, despite the challenges ahead. And while his focus on process and improvement over results helps his players keep losses in perspective, it doesn’t lessen their sting, according to first-year defender Emily Fox, the No. 1 pick of this year’s NWSL Draft.

“I do think the bigger picture is important, but also I think each game is critical, and each game does matter,” Fox said. “Also Getting in the habit of, ‘If we lose just one game,’ that creates bad mindsets. I think all of us feel that way. All of us want to win, want to be improving and want to get results. So I think we’ll look at this game and look at Orlando and press on.”

LEAGUE HISTORY MADE: When she entered the game in the 84th minute, Portland’s Oliva Moultrie made NWSL history as the youngest player ever to appear in a game, at age 15. The league’s age limit previously had been 18, but Moultrie won a court order to join Portland, with whom she has trained for some time.