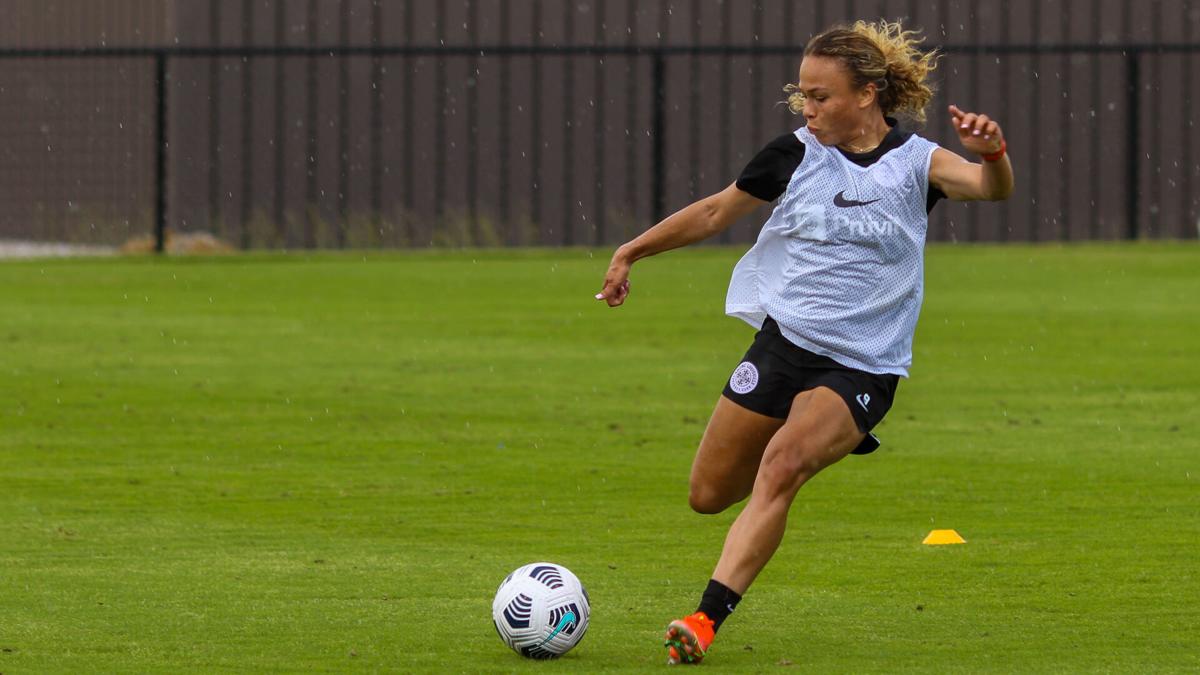 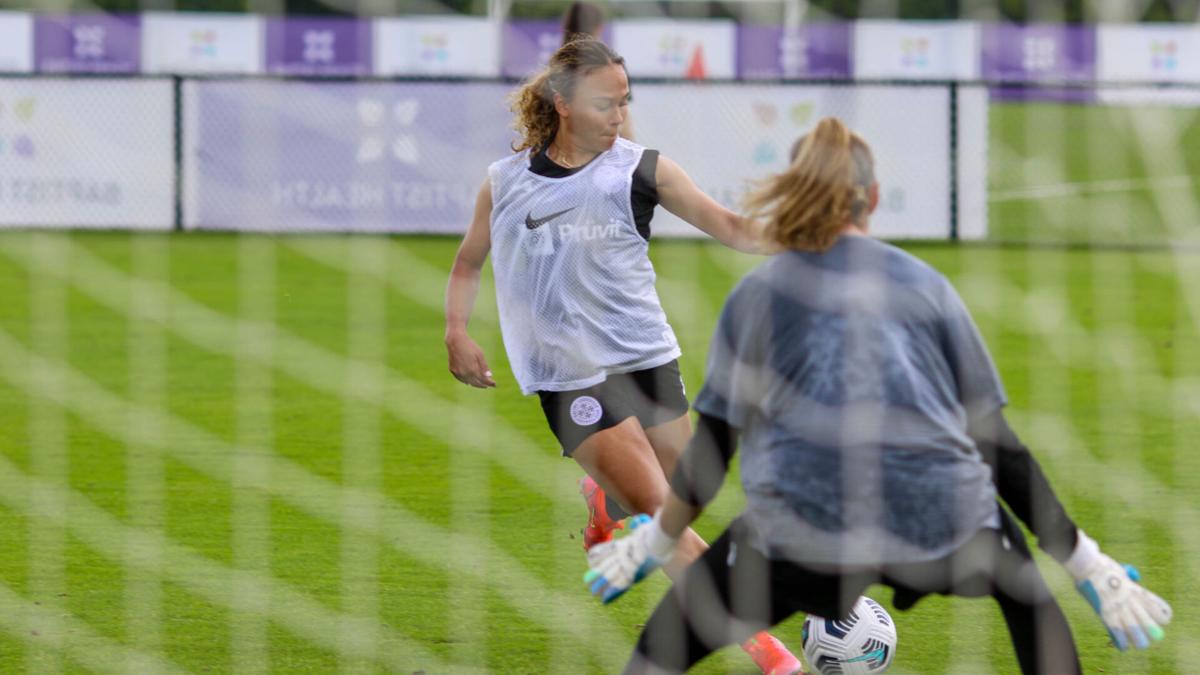 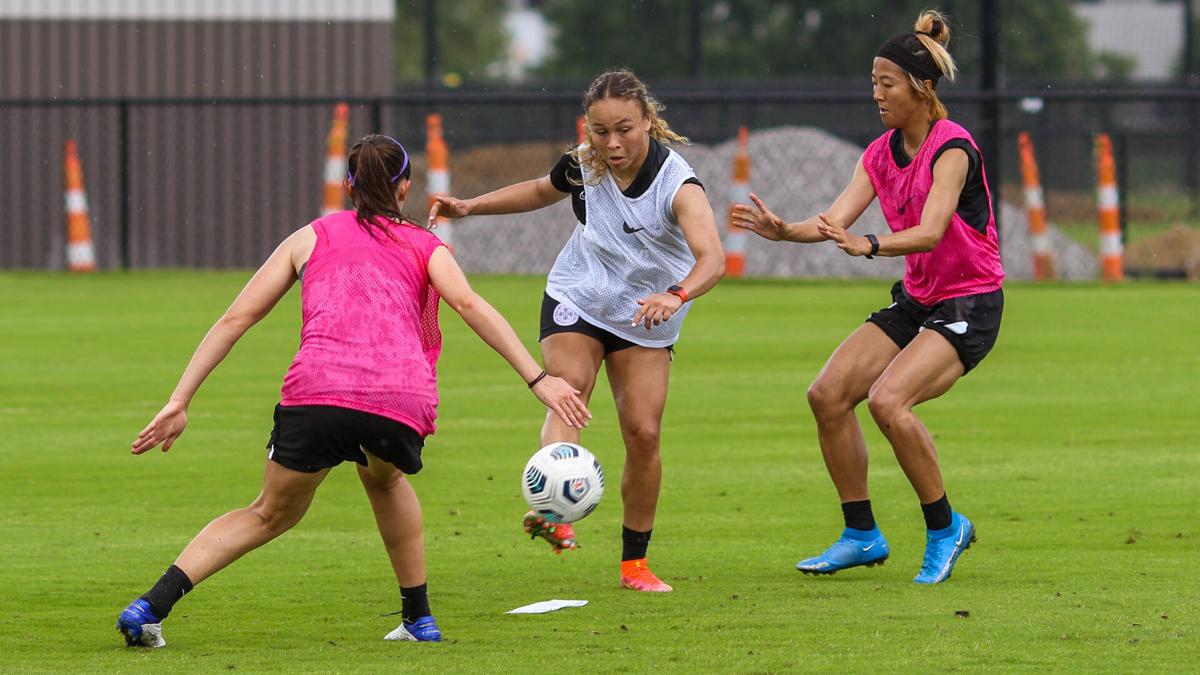 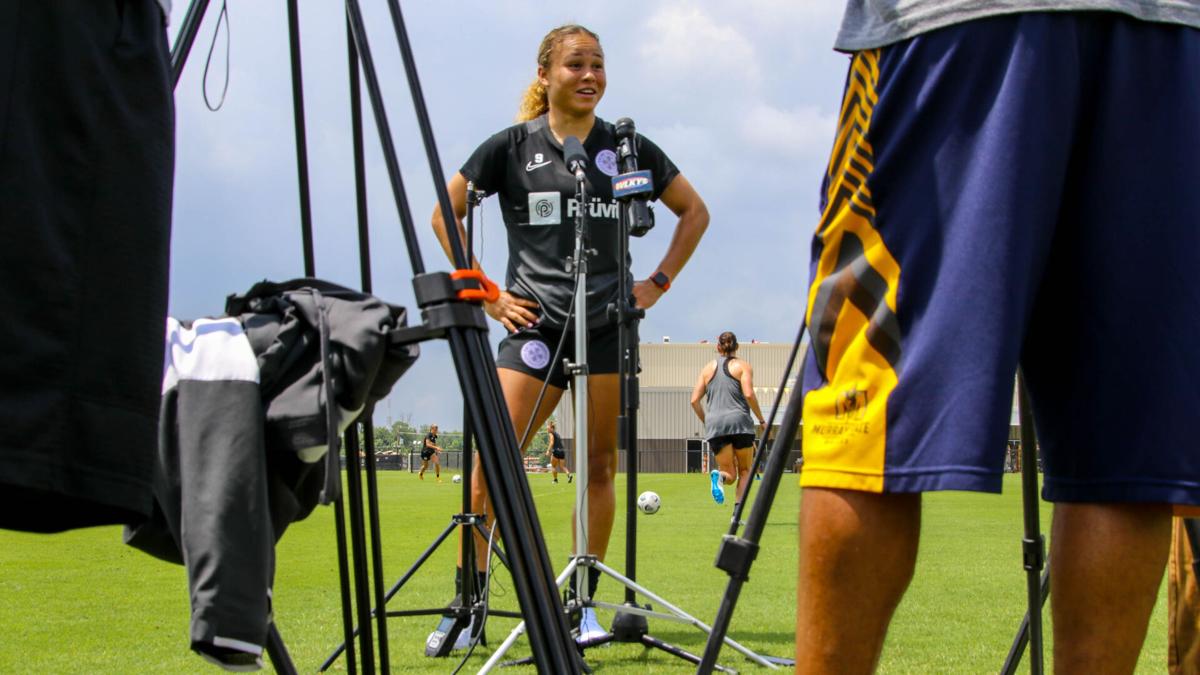 LOUISVILLE, Ky. (WDRB) – As the Racing Louisville FC players churned through their Friday training session at Champions Park, the temperature climbed into the mid 80s, the humidity climbed into the 50s, and the cicadas flitted here and there as the team sweltered.

One of them, Ebony Salmon, must’ve wondered who turned on the sauna. For the past two seasons, she has been a standout striker for Bristol City FC in the Women’s Super League. Back there today, the high temperature was 69 degrees.

So it’s little wonder that Salmon, after her first training session with Racing, noted that her two toughest adjustments might well be the 1). Heat, and 2). Humidity.

Cicadas, a short-term problem, might be a close third. Had she ever seen one?

But there’s little question that Racing coach Christy Holly and his team expect Salmon to acclimatize to the team and the climate very soon – and to heat up the expansion side’s attack when she is inserted near goal.

There’s little question, with the ball at her feet and the goal in her sights, she comes to life.

“She gives us a different look in attack,” Holly said. “She's a real serious threat, and someone who enjoys scoring goals, you can probably see that from today's training. She's a threat right off the bat, and I think she can be a really good addition for us. ... She wants to shoot. She wants to score goals. She has a very natural tendency in front of the goal, and has a very good appreciation of how to generate that split second of space, or that half a yard of space, in order to get a shot away. That's really what stood out to me.”

Just 20 years old, Salmon scored 18 goals the past two seasons for Bristol City, including 10 this past season, when the club wound up being relegated. She comes to Louisville with a two-year contract seeking a challenge, and to round out her game as she hopes to become more of a fixture for the national team in England.

She thinks the more physical, athletic style of the NWSL will complement the game she has developed in the WSL.

“I’d been having conversations with Christy for a couple of months,” she said. “Obviously it was a big decision for me but I think the ambitions that Christy and the club have match my ambition and it's something that I wanted to do and I wanted to push myself out of my comfort zone. Coming into the NWSL will definitely do it for me. ... This is my first session here today but you can tell that it's a great club and it's a club that I want to be at and push on and try and achieve great things with.”

Racing has generated just 10 shots over the past two games – and just one on goal. It hasn’t scored since a 2-0 win over Washington Spirit on May 21.

Salmon, in a few quick drills utilizing just a portion of a regulation pitch, showed herself adept in tight quarters. Nor did she show any hesitation when asked to describe her strengths.

“I'm an attacker and I'm quite direct, fast and powerful and I think, for me, the main attribute I bring is that I always want to go forward, always want to get into the box and try and score as many goals as possible,” she said.

Holly praised her “ability to separate herself from a defender."

"It's scary," Holly said. "We were working in tight spaces and she was able to find that little bit of space. We think as she gets fitter and gets on the field, it could be a really good addition.”

Fans likely won’t have long to wait. Because she arrives during the NWSL international break, Racing won’t play again until Sunday, July 20, by which time Salmon should be somewhat accustomed to her role and her teammates. Bristol’s season didn’t end until May 9, so she has been playing up to her change of location.

“We'd still put her in right off the bat, even if it were not an off week,” Holly said. “But we did put her in on the hottest day of the year, in the hottest period of the year, so she has to acclimatize to that. But it allows us to really hit the players real hard in these early days and then we can tone it down a bit and she can get a feel for the intensity with which we want to do things without worrying about fatigue for the upcoming weekend.”

Holly said her arrival is not so much about replacing the scoring pieces Racing has had, but allowing them to return to more comfortable positions.

“I think I've gotten here at a good time,” Salmon said. “I've got over a week to get into the team, get involved with the girls, before we've actually got a fixture. ... Christy has to put me where he sees me fitting into this team. We've got eight or nine days until the Houston game and we're just going to see about working hard in training and seeing if that gets me some minutes in the Houston game.”