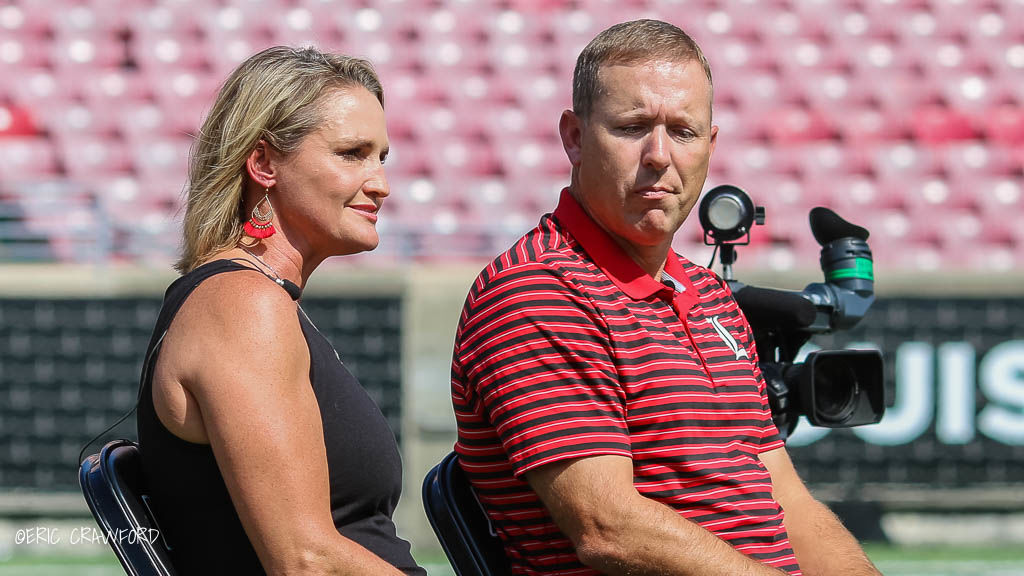 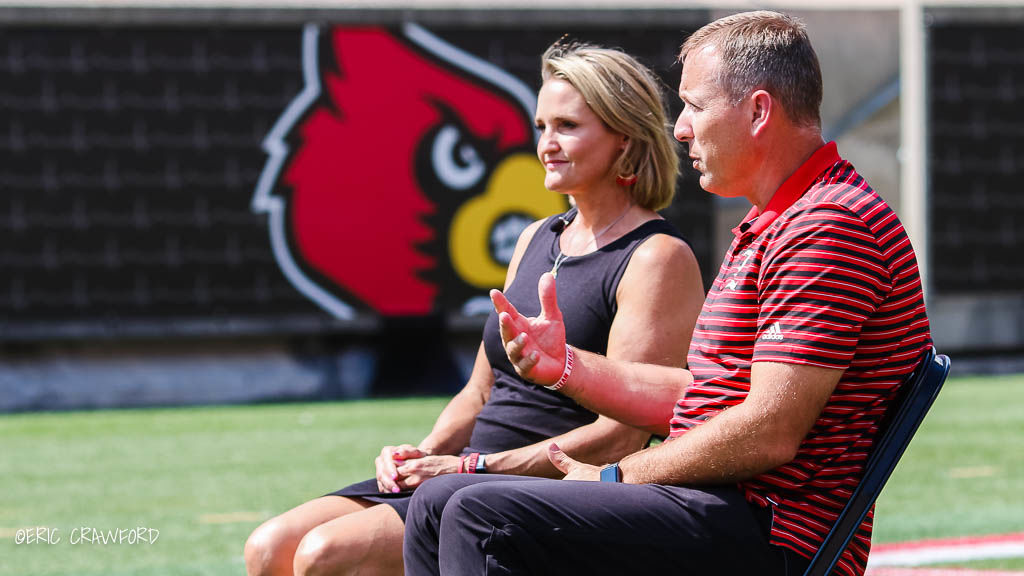 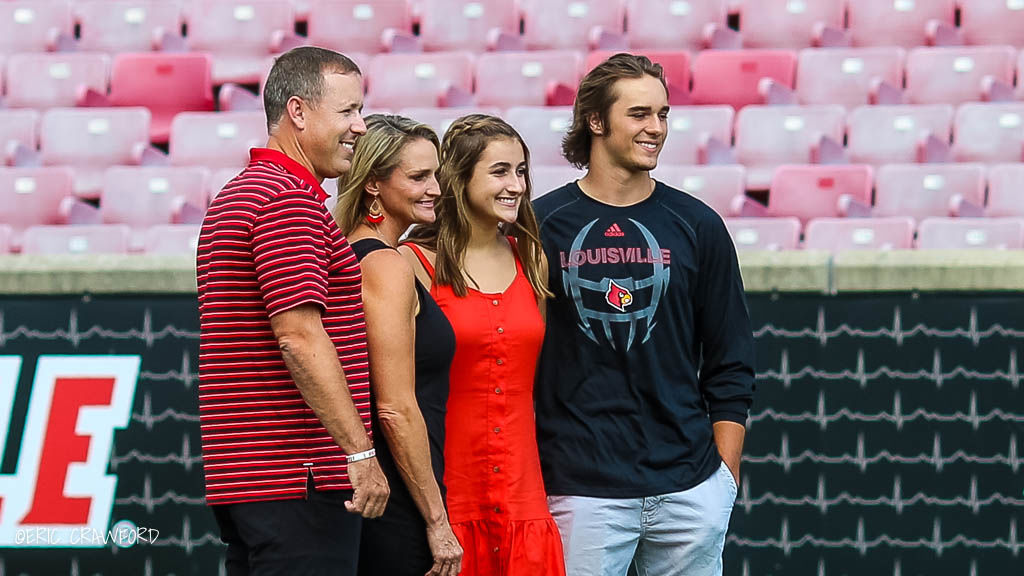 LOUISVILLE, Ky. (WDRB) – You should know, before this story begins, that on Saturday afternoon on the Cardinal Stadium turf, WDRB put University of Louisville coach Scott Satterfield and his wife Beth on the hot seat.

It wasn’t so much that we grilled them with questions. This was more of a literal grilling, as the sun baked down on the artificial surface, and the sweat started to roll down the foreheads.

Let this also be known, before I share some of the conversation: This couple is cool. You’d have to be to sit through an interview, laugh, be engaging and candid, in the middle of an August afternoon with quite a few other things to do. If you think that this is something a lot of football coaches and their wives do on the day before practice begins, think again.

So even before the discussion began, the Satterfields were ahead of the curve. It’s been a whirlwind since Beth and their kids, sons Bryce and Isaac and daughter Alli, arrived in Louisville after school was out in the spring. The transition was aided a bit by a family close by that could understand what the Satterfields were going though.

Their last name is Mack. Yes, those Macks, basketball coach Chris and wife Christi and their three young children.

“They're awesome. Great family,” Scott Satterfield said. “We haven't seen them much. The problem with what we both do is that we're often very, very busy. And then when we're not busy, if we're at home or get a little bit of free time, we're going to spend it with our family. He's the same way as we are. So, we really haven't seen them much. We've had dinner a few times. But they're very similar to us. He's got three kids, young family, our kids are a little bit older, but great family. Both athletes, mom and dad both played sports, so we're very similar in our roles at the university. So that's kind of cool, to bounce idea about what we're doing, and Beth with his wife, as well. So it's kind of neat being in the same neighborhood.”

Beth Satterfield added, “I've really enjoyed talking with Christi. I didn't realize that she was from Louisville, and so she's kind of helped me out and even picked up my daughter a few times from practice, so I really look forward to having a great relationship with her.”

The Satterfield’s move to Louisville was complicated a bit by leaving the place they’d all lived for most of their lives. But that doesn’t mean they didn’t know it was coming.

Beth Satterfield knew her husband’s name had been in some high-level discussions. Still, the Louisville job came suddenly.

“There really wasn't much of a conversation, it was such a whirlwind of events,” she said. “His team played in the Sun Belt Championship on Saturday, he had an interview on Sunday and then on Monday he was offered the job. And you go. In this profession, it’s always in the back of your mind. You have to be prepared. . . . Even last year I was kind of preparing for it too, because you could see it happening. You could see things progressing. He was getting to the point when we were at Appalachian that there really wasn't much more that he could accomplish there.”

She said that her husband has succeeded in coach because of his ability to connect with players. Asked by WDRB’s Annice McEwan why she believes her husband is a good coach, she said, “Well, there are many reasons, but I think he's a very humble leader. And I think that's a rare quality, sometimes, in this profession. And I think he's able to relate to people, no matter where they come from, who they are, he's able to relate to them really well.”

The couple met when both were athletes at Appalachian State. He was a walk-on quarterback. She was running track. A football teammate wanted to ask out another track runner, but she said she had to have a friend ask Beth out and make it a double-date. The original date never materialized, but Satterfield still wanted to ask out Beth, so he had a roomate call her, pretending to be him, and she said yes.

She did have to assure her parents that he wasn’t a prima donna starting quarterback. That wasn’t a problem. He was a fourth-string walk-on. She asked her strength coach “if he had any skeletons in his closet and he said no.”

The date was on.

“I took her to a dollar movie. Sister Act, back in 1993, Whoopie Goldberg, and the rest is history,” Scott said.

“And he didn’t buy me popcorn,” Beth said.

“No I didn't buy her anything, but I offered. I said hey do you want anything, she said no I'm good. I'm like, OK, this is going to be awesome. Cost me a dollar tonight. Later on, she said, ‘Just because I said no doesn't mean I didn't want it.’ She wanted popcorn, but I didn't know that. I was still learning things.”

Let’s just say they’ve had plenty of time, nearly 27 years later, to figure it out.

The two have met with a warm reception at U of L, and have opened their home to the football team and to other athletes, as they did last week, when 115 Fellowship of Christian Athletes students visited.

“We just like to open our home up to these players and show them love and show them, we're just like you, wasn't long ago we were athletes like you and playing college sports, and we're real people,” Scott Satterfield said. “We're here for you. You can lean on us for anything that's happening. When we're on the field, we're going to compete our tails off, but off the field we're going to love on each other and help you out and trying to help you. It was a great response by the players and they loved it and we'll continue to do it.”

Beth Satterfield said that the first time players came over, they “were very grateful and thankful and genuine and seemed to really enjoy themselves and appreciate it. It was fun. And I also enjoyed having the FCA group over, and meeting some of the female athletes. I enjoyed that very much.”

As for the job ahead for her husband and his staff, she said she knows it’s going to be a long climb. She said she was surprised at some of the things she heard about the program when she arrived, but says she’s looking forward to seeing Scott turn it around.

“Just in hearing the conversations about things that have happened, and the morale of the team when we arrived, that was a little heartbreaking, actually,” she said. “But I know that he and his staff, I know the kind of men that they are, and I know that they believe in these players. I know it'll be a lot of hard work, but it's going to be possible.”