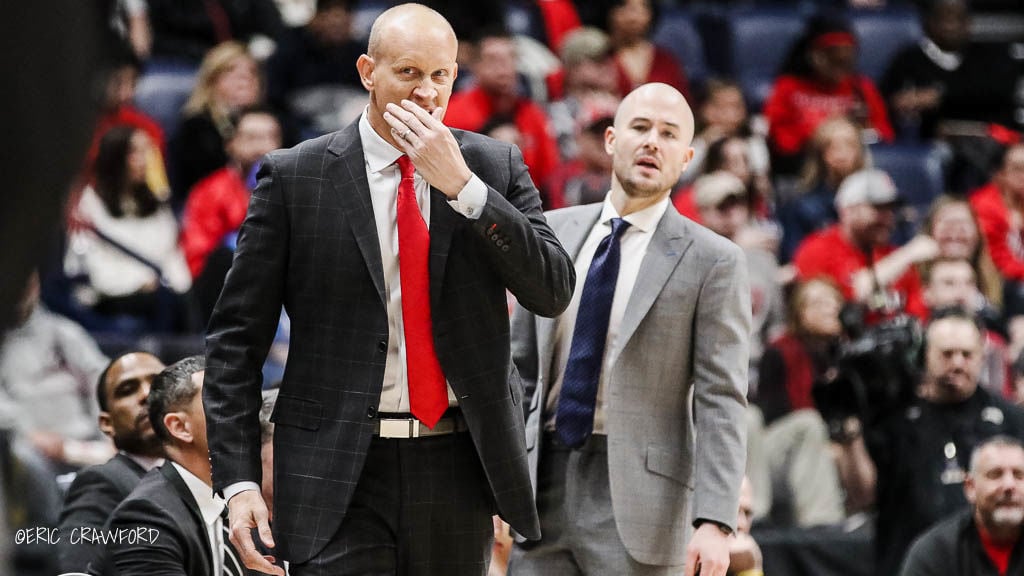 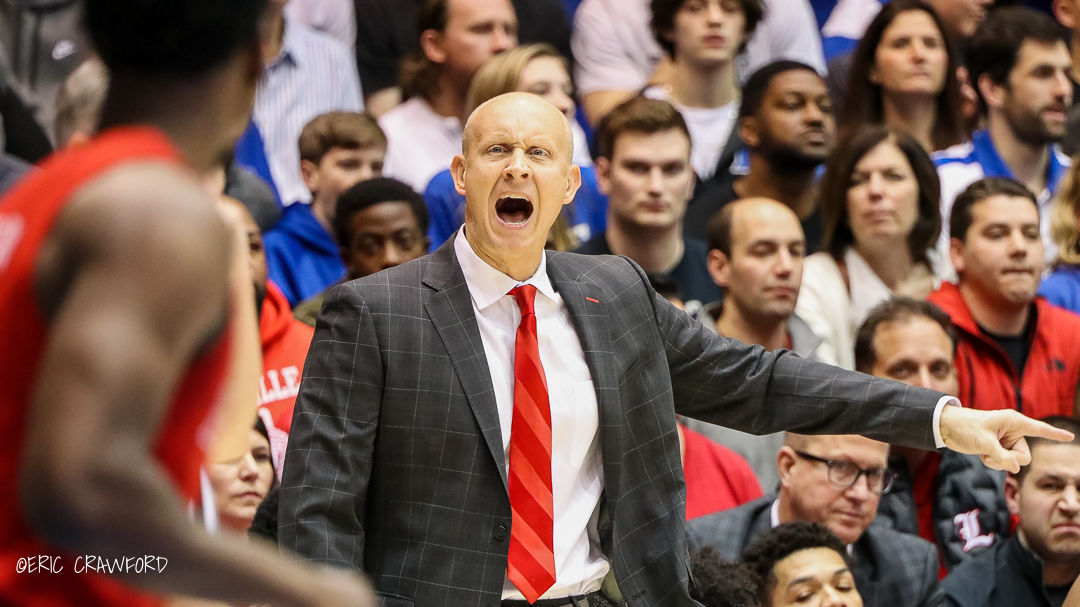 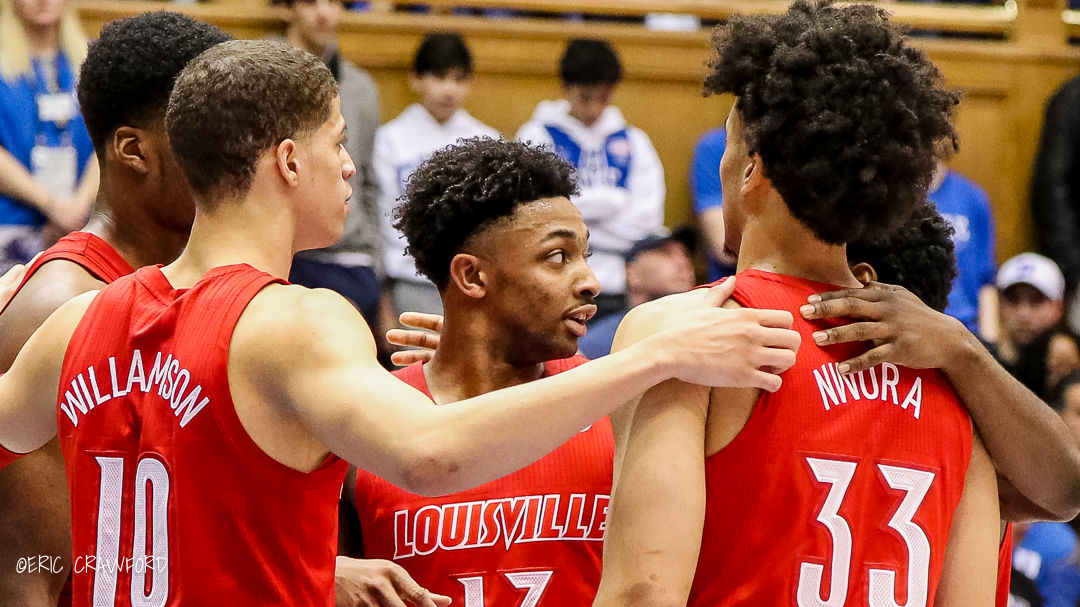 Louisville players huddle in the second half of a win at Duke.

Louisville players huddle in the second half of a win at Duke.

LOUISVILLE, Ky. (WDRB) -- No. 6-ranked Louisville got its seventh straight win on Wednesday night, weathering an early offensive flurry from Boston College to pull away late for an 86-69 victory.

It was another impressive offensive performance for the Cardinals, but the game might've been most notable for the use of a 2-3 zone for much of the second half by Cardinals' coach Chris Mack, a devout man-to-man guy.

Still, you go with what works, and Mack acknowledged after the game that the zone was a key. Jordan Nwora scoring a career-high 37 didn't hurt much, either.

"I don't know if anybody’s better than this team," he said of Louisville. "The thing about this team, they’ve got nine starters. They come off the bench with guys who can offensively put points on the board quickly. It's a huge advantage. Clemson, Jordan Nwora didn’t play his game. They didn’t miss a beat, because the guys off the bench are so capable. That, and they can dominate the game on the glass. . . . They're a really good basketball team. They’ve lost one game in the past month for a reason."

A look back at the victory, with some takeaways:

1). REMEMBER THE COMPETITION. This won’t be a popular point, but it’s an important one from the standpoint of perspective. Boston College is rejuvenated, but not an NCAA Tournament-caliber team. In fact, from a tournament resume standpoint, Louisville's current seven-game winning streak has come against non-NCAA Tournament competition, with the notable exception of a signature win at Duke.

Moreover, of the Cards' next seven games, five will come against teams not expected to make the field, and the two others will be against teams looking for a win over Louisville to get off the bubble, or perhaps even onto it.

So, while drawing statistical conclusions is fine, it’s important to remember that almost anyone Louisville encounters in the big dance will be better than teams the Cards are playing right now.

It’s one reason why the Cardinals can win games, as they did Wednesday night at Boston College, and continue to drop in the NCAA’s NET rankings. But they can't worry about that. If they keep winning, especially on the road, they'll be in position for a No. 2 seed in the tournament, at least.

2). JORDAN RULES. Louisville proved at Duke, and has proven throughout this winning streak, it doesn’t have to rely on scoring from Jordan Nwora to win. But it makes winning a whole lot easier.

The Cards got Nwora going early against Boston College, and he never stopped going. He hit one of those streaks where he strung several three-pointers together, at one point scoring nine straight Louisville points on three straight threes. Twice, he got it going enough to force BC coach Jim Christian into calling a timeout.

Regardless, Mack told Bob Valvano after the game that the coaching staff is looking for ways to get Nwora more shots. Over the four games prior to Wednesday’s win, Nwora had shot just 14-41 from the field (34.1 percent), and was just 9-27 from two-point range (33.3) in that span. He took just five shots in a win over Clemson, and hadn’t made more than five in any of the games.

Nwora said he’d been working out with coaches on moving away from the ball, and trying to work against game-type defense.

“I’m just trying to be more active,” he said after his career-high 37 points Wednesday.

Mack said his teammates need to be more active in getting him the ball in position to score.

“We’ve got to figure out ways to find him,” Mack said. “Our guys have to push the ball a little bit harder, not just for Jordan but for our team’s sake, to get open looks.”

3). KEY STAT – OPPONENT FG PERCENTAGE. This always is a key for Mack’s teams, and a goal of the pack-line defense is to limit good looks and hold down opposing field goal percentages. It's job No. 1, before ball pressure or steals or anything else.

For Louisville, however, the field-goal percentage race works both ways. Whether the Cardinals beat teams by out-shooting them or by holding down their field goal percentage, they are 17-0 when shooting a better percentage than their opponent, and 1-3 when they don’t.

Because the Cardinals rank sixth in the nation in field goal percentage defense, holding opponents to 37 percent shooting before Boston College shot 40 percent from the field on Wednesday, that edge is more likely to be accomplished on the defensive end than the offensive, where the team doesn’t rank in the top 50 nationally.

4). IN THE ZONE. Louisville got some mileage out of a 2-3 zone, that seemed to slow Boston College after a hot offensive start. Mack, who is a man-to-man coach, used the zone more extensively in the second half Wednesday than at any time in his Louisville tenure so far, and called it one of the big differences in the game in his postgame comments.

How much he might use it going forward, however, is likely a game-to-game proposition. Still, it’s good to have in the bag of options, especially for a team that already is among the more solid defensive units in the country.

“I thought we did a great job (in the zone),” Mack told Valvano after the game. “I thought outside of maybe giving up a few offensive rebounds and fouling unnecessarily, I thought our guys covered the areas that we had talked about. We got out on shooters, and it was really the difference and the separator in the second half.”

5). JOHNSON MORE THAN A SCORER. Freshman David Johnson got onto the radar with his 19-point effort at Duke, but over the past four games he has done more on offense that just score.

He’s had at least six assists in each of those four wins, and has been a catalyst for offensive activity whenever he has entered the game.

Despite his four turnovers on Wednesday, the Cardinals were still plus-18 in Johnson’s 24 minutes of play. He also contributed three steals and eight rebounds, though he went just 2-of-9 from the field, for six points.

It wasn’t as flashy a performance by freshman Samuell Williamson, coming off a career high, but he still was solid, finishing with five points and four rebounds and turning in a solid defensive effort in 18 minutes.

BONUS NOTES: Malik Williams’ 13 rebounds against Boston College matched a career high . . . Louisville is getting 30.5 points per game off the bench its past four games, with three of its top four bench outputs of the season coming in that span . . . The Cardinals have controlled the opening tip in 18 out of 21 games . . . Louisville’s 9-1 start is its best in six seasons in the ACC, and is the program’s best conference start since going 9-1 in the Big East in 2008-09.