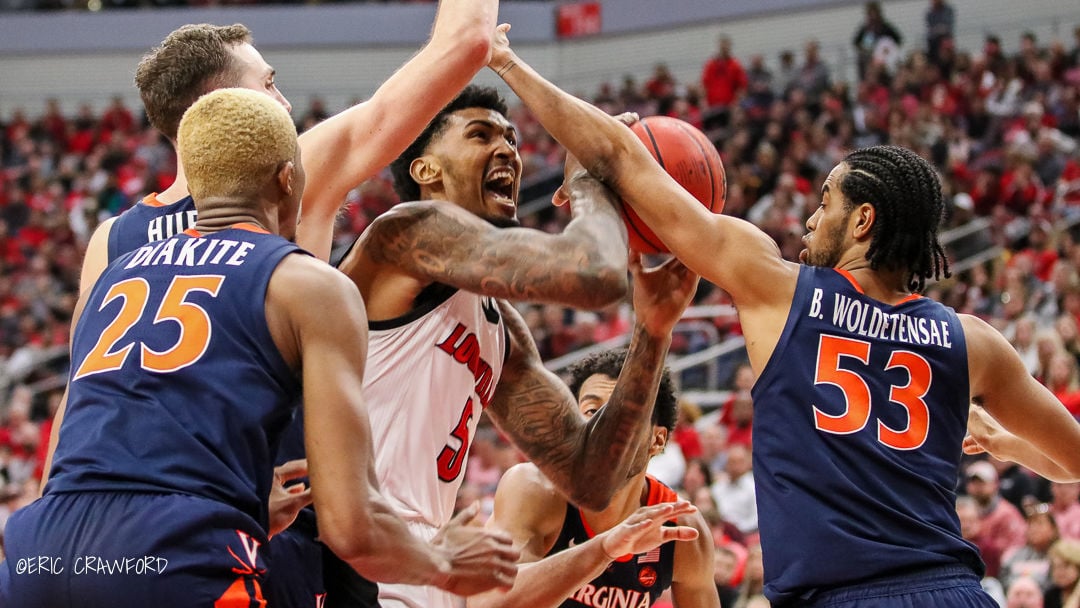 Malik Williams goes up against the Virginia defense in the post. 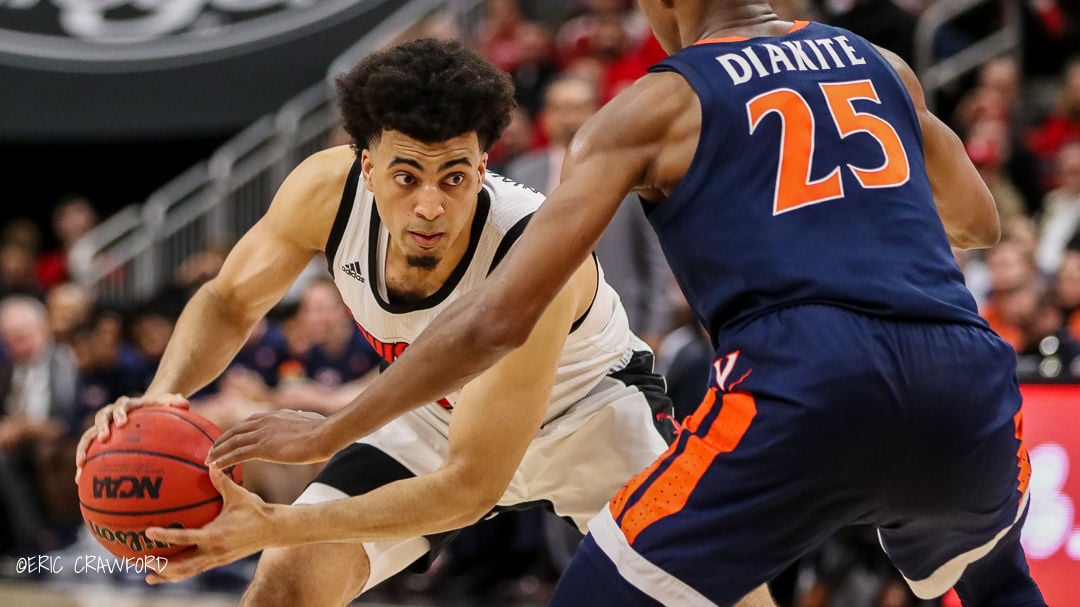 Jordan Nwora led Louisville with 22 points in a victory over Virginia. 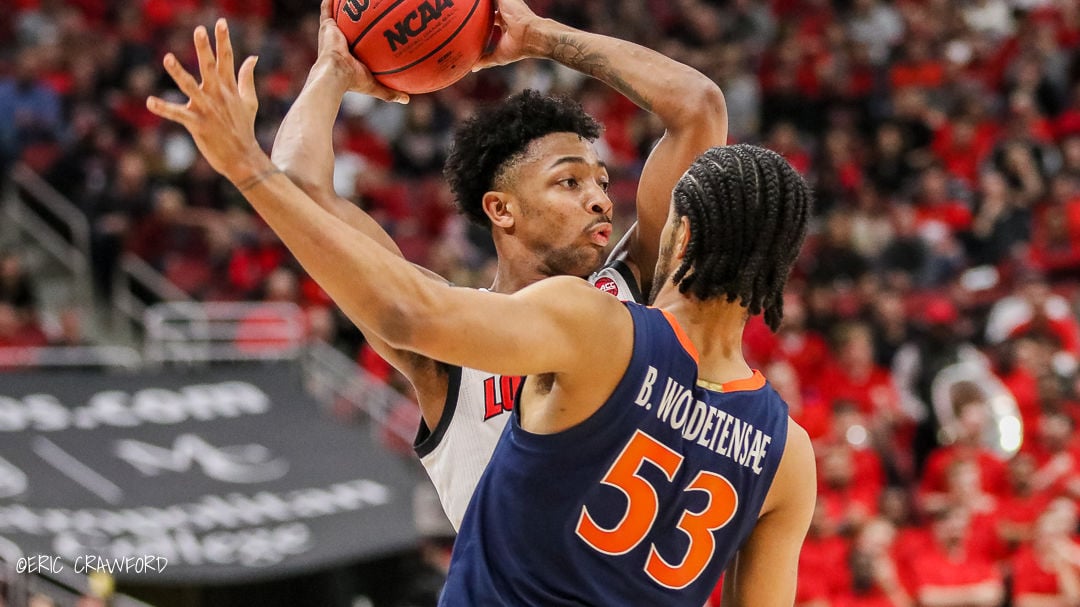 Louisville's David Johnson works on offense in the second half of the Cardinals' win over Virginia. 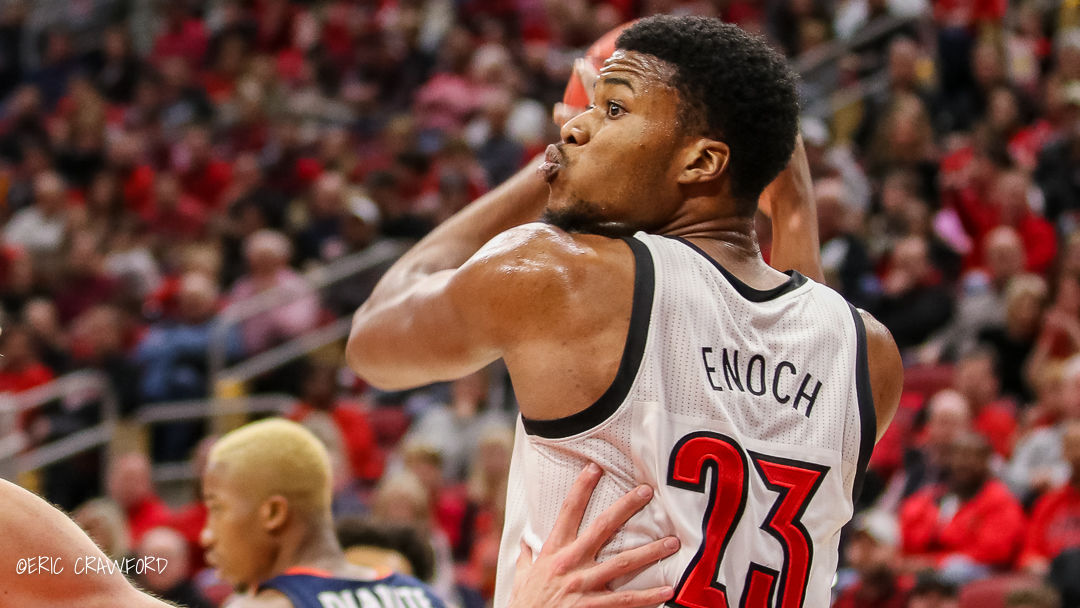 Steven Enoch works in the post in Louisville's win over Virginia. 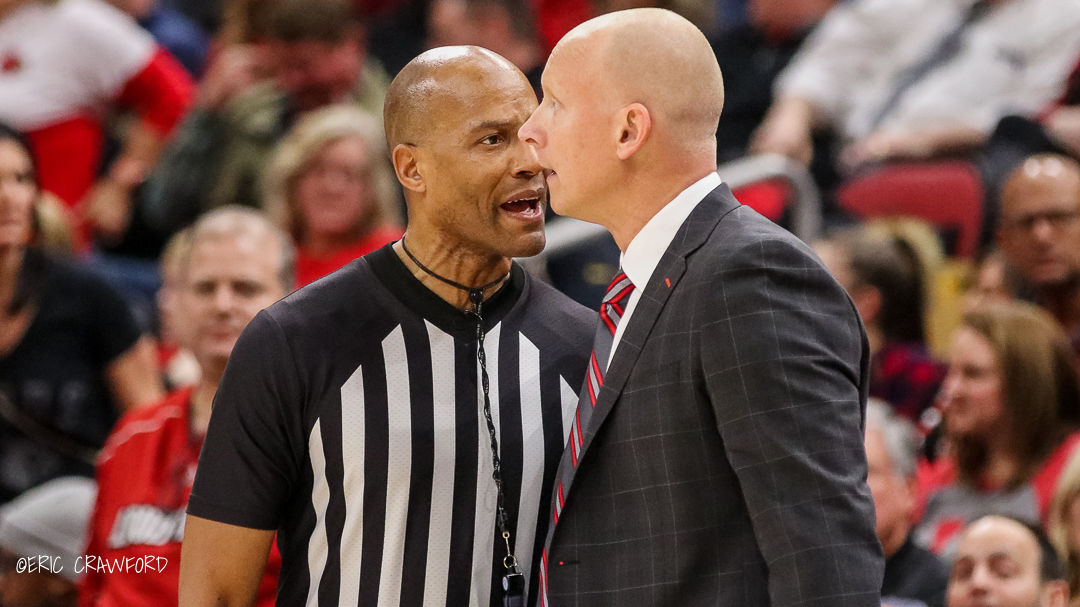 Chris Mack in a discussion with a referee in Louisville's win over Virginia.

Malik Williams goes up against the Virginia defense in the post.

Jordan Nwora led Louisville with 22 points in a victory over Virginia.

Louisville's David Johnson works on offense in the second half of the Cardinals' win over Virginia.

Steven Enoch works in the post in Louisville's win over Virginia.

Chris Mack in a discussion with a referee in Louisville's win over Virginia.

LOUISVILLE, Ky. (WDRB) – You knew it wouldn’t be a normal game. No chance. It doesn't matter what Virginia's record is. When it faces Louisville, crazy stuff is going to happen.

On Saturday, two of the top defenses in the Atlantic Coast Conference were on display when Virginia visited No. 5 Louisville in the KFC Yum! Center.

Therefore, neither team could miss.

Louisville’s first six baskets came on 3-pointers. Virginia’s Tomas Woldetensae then made five out of six threes – by himself – to tie the game at 68 with 3:32 left.

From there it was a prize fight. Virginia, for the purposes of Saturday’s game, was still Virginia. But this was not the same old Louisville.

Virginia tied the game, then Louisville, in the words of its players, anchored down. The Cardinals gave up only one field goal the rest of the way. They dug in on defense, came up with big rebounds and made key free throws to emerge with an 80-73 win, their 10th straight on the season, ending a nine-game losing streak to the Cavaliers.

"I'd like to talk about Virginia's offensive struggles," Mack cracked, opening his postgame news conference. Everybody laughed. You can make jokes when you win.

Virginia hadn't scored more than 65 all season. They'd broken 60 in only half their games. But against Louisville, they all of a sudden couldn't miss from three. Mack threw everything he knew at the Cavaliers. Man-to-man. Zone. Switching man-to-man.

None of it worked. Louisville found itself having to win with offense against a notoriously good defensive team. And it did. It hurt Virginia from the outside early, and hurt it from inside late. Steven Enoch and Malik Williams scored 13 points each, and David Johnson was effective driving into the teeth of Virginia's pack line and getting to the line or finding open teammates.

'It took a heck of an effort,' Mack said. "You know, I don't want to mispronounce his name (Woldetensae), but that's one of the best shooting performances I've seen. They did a real simple action and it's just tough to guard when a guy gets that hot. We put multiple defenders on him and their other players. Kihei (Clark) stepped up when we help try to, sort of, double as he came off the screen. But, they just kept answering time after time. But I give our guys a lot of credit, you know, you get up as many points as we did and then see that lead evaporate as Virginia has done in so many times before. I'm sure that was in the back of our guy's minds but our resiliency was what was needed. And you're going to have to do that when you play against Virginia who, in my opinion, is just getting better and better and better and has the looks of an NCAA Tournament team and it's not even close. We're very fortunate."

After the last of Woldentasne's 3s to tie the game, Mack was issued a technical foul, which he didn’t quite understand, and Virginia went up 70-68 on the free throws.

Mack appeared surprised by the technical.

"I can't get into the officiating," he said after the game. "I thought it was a bad call. It's a tie game, but he's the official and he's right in that situation. Sometimes my wife is right in arguments and I still think she's wrong."

Mack's players had his back.

Johnson scored on a drive in the lane, and after a missed Virginia free throw, Enoch was fouled on the rebound and made a pair of free throws. Another miss by Virginia, and it was Williams who hauled down an offensive rebound in traffic and was fouled, and hit 1 of 2.

After Johnson made 1 of 2 to put the Cards up 4, Virginia's Kihei Clark drove the lane for a jumper to cut Louisville's lead to 2.

Johnson followed with two more free throws with 40 seconds left to send the lead back to 76-72, and when Clark missed the second of two free throws, Jordan Nwora grabbed the rebound, the Cardinals got the ball to Ryan McMahon, and he buried both free throws to make it 78-73 with 23.8 seconds left.

And nobody in the building felt the lead was safe. I tweeted it at that point, and former Cardinal Donovan Mitchell was following, and responded, "LOL we've been here before."

Mack called timeout. Virginia, when play resumed, got up a 3-point shot that bounced off, and Williams claimed the rebound and hit both free throws to finish it.

"They can slash, they can score inside, obviously can score outside with the likes (Jordan) Nwora," Virginia coach Tony Bennett said. "It's just a multi-faceted team that when you can score in different ways, play in different styles, that makes you effective."

The Cards were led by Jordan Nwora with 22 points. Woldentasne had 27 for Virginia.

Both teams shot better than 50 percent -- Louisville 51, Virginia 53. Both teams were outstanding from 3-point range: Louisville was 9 of 22. Virginia was 11 of 22. Louisville got a big boost from its reserves, outscoring the Cavaliers 29-2 off the bench.

And once again, the Cards were closers. After the big 3 to tie it at 68 with 3:52 left, they found a way, though players acknowledged, some of their past failures were in the back of their minds.

"We've had a bunch of chances to beat them since I've been here, but somehow they always find a way to win," Nwora said. "So it felt good being able to finish the deal today. . . . All the older guys were talking about it, that we hadn't beaten them yet. So we had a little chip on our shoulders. We were able to anchor down at the end and get a few stops, and Dave was able to get into the lane, and make free throws. We were just looking at it as we weren't going to let ourselves lose. We even talked about it at halftime, because it seems like we're always up. The big thing was getting stops."

For Johnson, it wasn't a spectacular stat line, but the ball was in his hands a great deal with the game on the line, and he was able to deliver.

"His size is great. He really attacked," Bennett said. "Chris ran some good stuff to get him downhill. He made the plays and again we probably had a couple breakdowns where we either reached or leaned and weren't quite right but the young man, being a freshmen from this area, he showed hometown good tonight in that setting."

Louisville now has a pair of games away from home, at Georgia Tech on Wednesday and at Clemson on Saturday, before returning home to face Syracuse on Feb. 19.