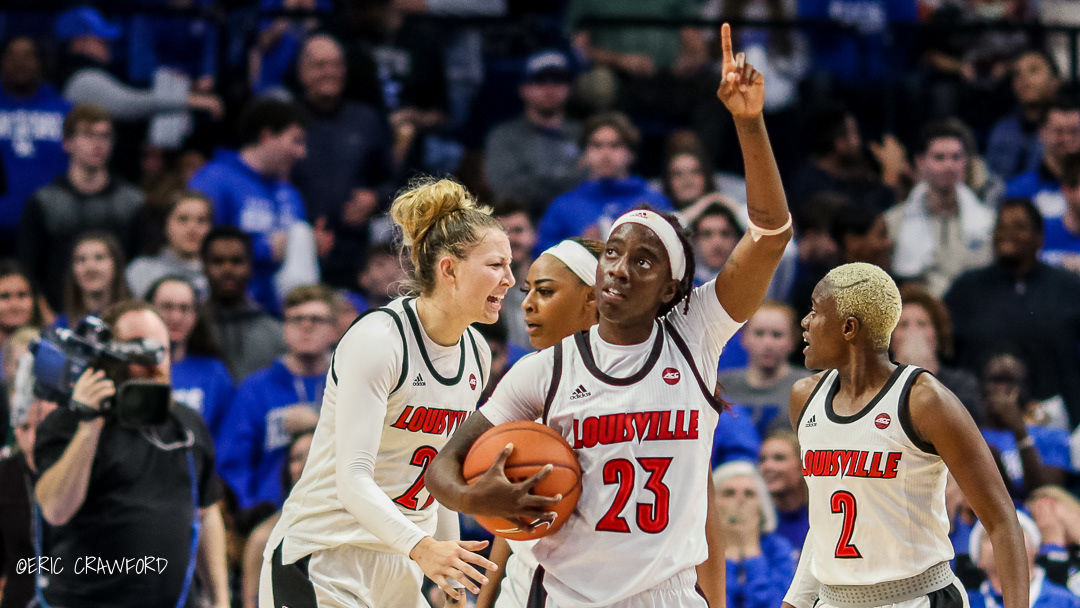 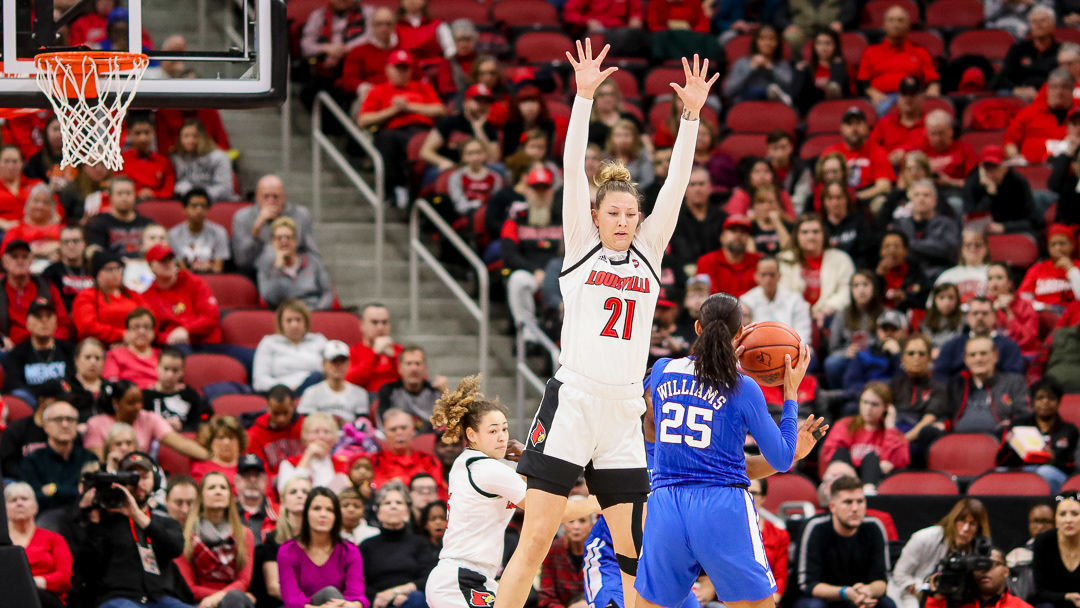 Louisville senior Kylee Shook, the program's all-time leading shot-blocker, is a semifinals for national defensive player of the year. 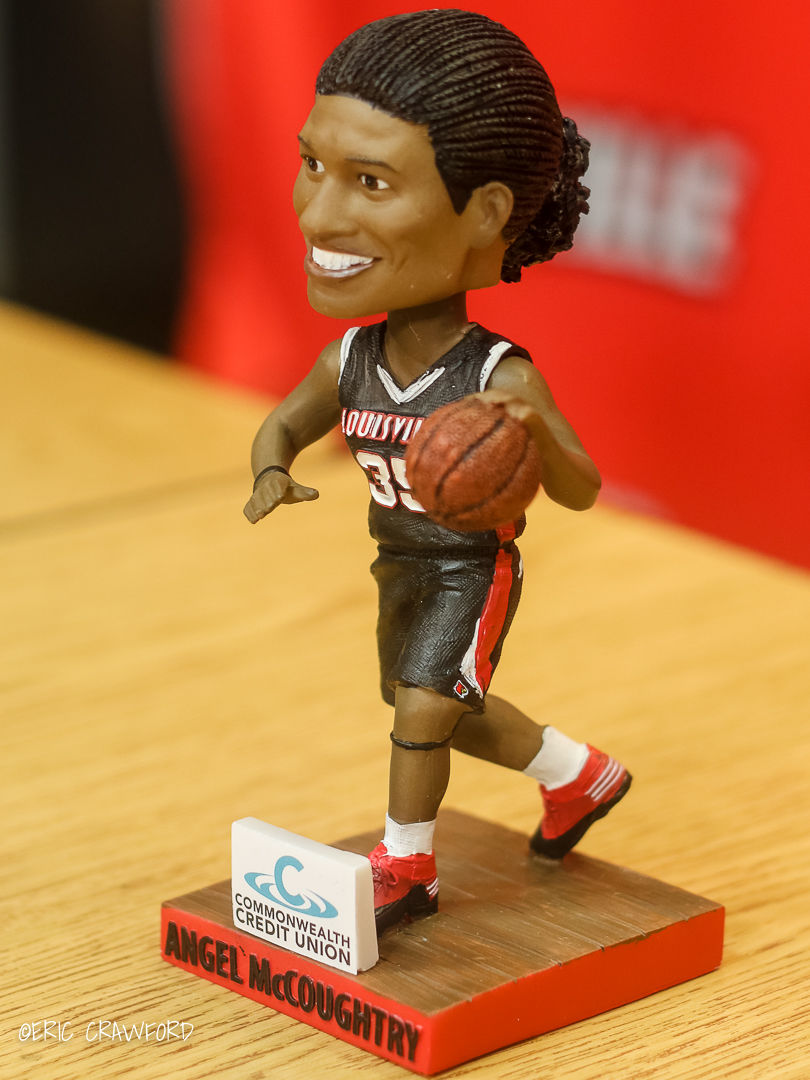 The first 1,000 fans to Louisville's home game against Boston College will receive an Angel McCoughtry bobblehead.

Louisville senior Kylee Shook, the program's all-time leading shot-blocker, is a semifinals for national defensive player of the year.

The first 1,000 fans to Louisville's home game against Boston College will receive an Angel McCoughtry bobblehead.

LOUISVILLE, Ky. (WDRB) – Senior Day is still a few days away for the University of Louisville women's basketball team. But, over the past few weeks, every day has been Senior Day for the Cardinals, who enter Thursday night's home game against Boston College with a share of the Atlantic Coast Conference regular-season title already in hand.

When adversity hit, Louisville coach Jeff Walz turned to his seniors. After back-to-back losses with sophomore transfer Elizabeth Balogun away to help the Nigerian National Team qualify for the Olympics, the team captains met to try to set things right. When Dana Evans, the team's leading scorer and top candidate for ACC Player of the Year, sprained an ankle and missed Sunday's game at Pittsburgh, along with Balogun, Walz turned to his seniors again.

They have responded. Jazmine Jones is averaging 14 points a game over Louisville's past four victories and is shooting 58% from the field in that span. Kylee Shook is averaging 12.8 points, 10 rebounds and 4.5 points per game. Transfer Yacine Diop is averaging 10.3 points per game, and Bionca Dunham has become a defensive enforcer.

"Senior leadership is going to be big," Walz said. "We've had great senior leadership for the past four or five years here. And when you're seniors are taking things personally and fully committed and invested, they hold everybody else accountable. And that's where Bionca has been so valuable for us. She isn't afraid to get on anybody, challenge them and make sure they know what they're doing. That's what you have to have. She's got some toughness to her that I just can't replace on the court right now."

Walz said he wasn't sure of the status of Evans or Balogun for Thursday's game, which tips off at 6 p.m. at the KFC Yum! Center. Walz also said Dunham has been dealing with a knee issue.

The Louisville coach doesn't expect to know about any of them until Thursday, most likely. Evans and Balogun practiced briefly Tuesday.

Chasing an outright ACC title, something the program has never achieved, is a big motivator. But Walz says he's not assuming it's a done deal. At Boston College in January, Louisville won an 81-70 shootout against the Eagles. It was the only time this season that an opponent has put 70 points on the Cardinals.

"We're a good basketball team, but we can't look past anyone," Walz said. "Just look at our scores throughout the conference season. So we're aware of that, and hopefully we'll be close to 100%. ... Our past two years we've been co-ACC champs, and it'd be nice to be outright champs. But we have to take care of business. We got to win this ballgame on Thursday night, and then, you know, if we're fortunate enough to do that, then it's Senior Day on Sunday. There's a lot to play for, and we know that. We're not necessarily playing for an ACC Tournament seed but we are playing for an NCAA Tournament seed, and you're playing for what kind of momentum do you want to have going into your conference tournament. Do you want to be backing the car in, or pulling forward? We've talked to our kids about that."

"It's sure not her passing," Walz joked. "I think they did a good job with it. I think she'll be pleased."

Here’s the @angel_35 bobblehead that will be given to the first 1,000 fans at the @UofLWBB game Thursday night against Boston College pic.twitter.com/y8fPRXATY9