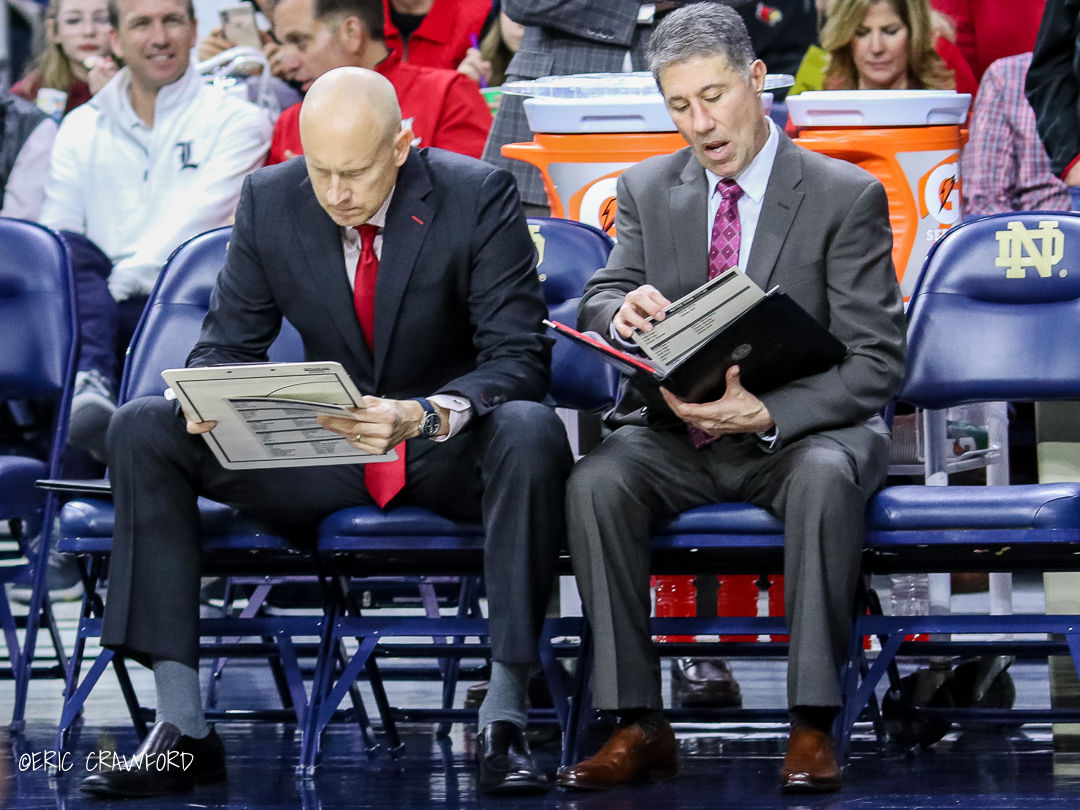 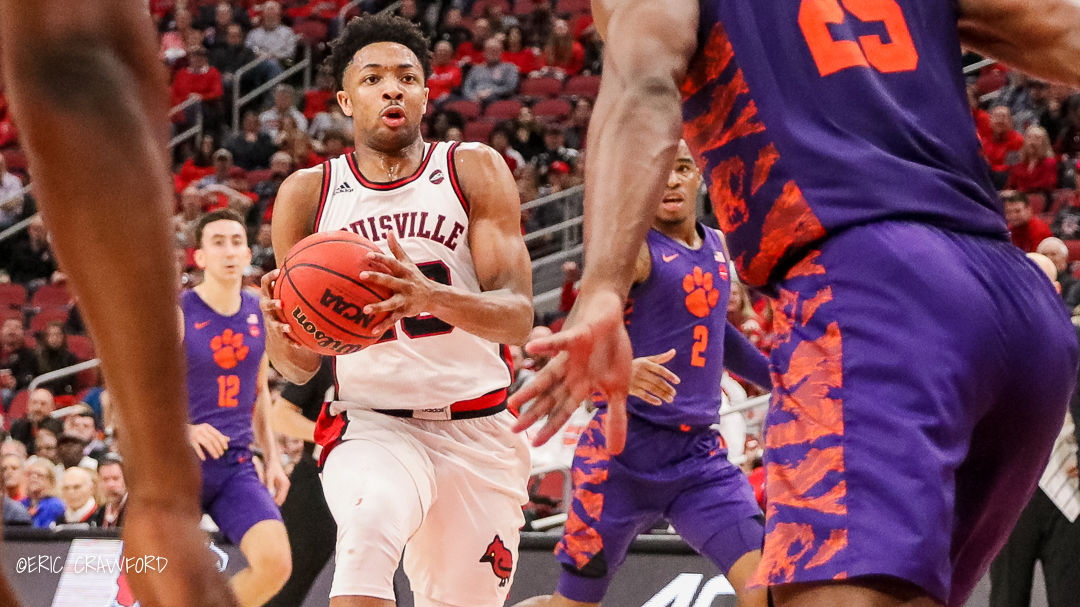 LOUISVILLE, Ky. (WDRB) – Everybody has opinions on what has happened with the University of Louisville basketball team, but Cardinals’ coach Chris Mack says he hasn’t put a finger on what happened last week, when his team went on the road and lost twice to teams with losing ACC records.

The question is why?

“It’s probably mental, it’s probably physical, its’ probably all of it,” Mack said after Saturday’s loss at Clemson. “I said earlier, I can’t really give you an answer, it’s so immediate after. I know we’re not playing very well. It doesn’t take a basketball savant to understand that.”

1). IT’S ABOUT ENERGY. When this Louisville team plays with great energy, it stays in games, and usually wins. Even when it doesn’t win them, it gives itself a chance to win. It hung tough at Kentucky.

There has been no energy to speak of from this team as a whole over the past couple of games, with the exception of Malik Williams, Dwayne Sutton and David Johnson.

Just getting out there and showing intensity and enthusiasm goes a long way, and these guys just haven’t had it, for whatever reason, in the past couple of games.

That’s 10 more possessions than Louisville averages per game. (This stat is not infallible. The Cardinals had 76 possessions in a loss to Texas Tech, but in their next two highest-possession games, they beat Akron and blew out Miami on the road in their season opener.)

The moral of those stats is that when Louisville is dictating that kind of pace with turnovers and transition baskets, it succeeds. When it creates that pace by turning the ball over or playing poor transition defense, it doesn’t.

Does that mean Louisville should start pressing and gambling for steals? No. You can't make that change that quickly. And even Rick Pitino wasn't pressing as much at the end of his Louisville tenure. It could, however, mean that Louisville plays more zone, and more aggressively out of it.

With David Johnson in the game and the spot-up shooters it possesses, Louisville can be a dangerous transition team. Its problem is that it isn’t built to be a transition team. Louisville’s defense under Chris Mack is designed to choke out the lane, make opponents shoot a low percentage, and to be tough on the defensive boards.

The team’s offensive efficiency, even after some nightmare halves last week, remains No. 11 in the nation. As the season goes on, the team continues to look at times like a roster that was recruited to play one way coming to terms with trying to win in another way.

It should look that way. Because that’s what it is.

3). STRUGGLING WITH PHYSICALITY. Basketball is all about matchups. How can this Louisville team go into Cameron Indoor Stadium and beat a Top 10 Duke team, but struggle like crazy with a middle-of-the-pack Georgia Tech team?

Easy. Duke (minus Wendell Moore) is not as physical as Georgia Tech. Against Duke, Louisville was the bully. After the game, Mike Krzyzewski compared the game to an upcoming UFC match. But against more physical opponents, Louisville struggles, unless its three-point game is on, as it was against Virginia.

Either Louisville has to rediscover some of its bully-ish nature and establish a more physical defensive presence in a hurry, or it is going to have to find a way to be effective defensively in the absence of that kind of presence.

4). PASSING FAZE. Louisville has multiple scoring threats, but in too many possessions against Clemson, too few of them touched the ball. In short, the team’s passing grew stagnant. This team started the season whipping the ball about beautifully and fluidly at Miami. But as the season has worn on and defenses adjusted to what Louisville was trying to do, the ball slowed down, the pace has slowed and Louisville became a bit easier to defend.

If the defense isn’t having to defend everyone on the court, Louisville gets a much easier to guard. The Cardinals are at their best when multiple players are scoring. And in fact, nothing gives a shooter confidence like someone making a tough drive in order to kick them the ball.

It seems strange to say it, for a team that doesn’t play with extreme pace, but Louisville looks hurried at times when it struggles offensively. Instead of working for a good shot, it takes the first shot, when one or two more passes would’ve created the ideal look. Johnson had eight assists at Clemson. The rest of the team had three. Which brings us to our next thought.

To hang the responsibility for a good start on Johnson, who is talented but also a freshman, is to take some risk – not that the start issue won’t be fixed, but that you’re perhaps hanging too much on a player who might or might not be ready to handle it.

Regardless, Johnson is the team’s most productive guard. And he’s now getting the most minutes at his position. People who want him to play more, you’re talking about maybe 4-5 minutes a game. He’s not likely to play 35 minutes, but he could get up to 30. How much difference that would make, I’m not sure.

I’ve seen some online complaining about McMahon, but the bottom line is that, statistically, Louisville is better with him on the court. He deserves every minute he gets.

One last thought on Johnson. A few years back, Louisville point guard Quentin Snider got hurt and Donovan Mitchell had to slide over to the point guard spot for a few games. They were, perhaps, the most effective offensive games Louisville played all season, because Mitchell with the ball in his hands was too much for opponents to deal with.

Then-coach Rick Pitino wasn’t going to take the ball out of Snider’s hands when he came back from the injury. But Mitchell was the real deal.

I feel a lot the same way about Johnson.

6). THE NWORA QUESTION. It’s been tough to watch Nwora struggle the past couple of games. Mack held him out of the starting lineup at Clemson, but it didn’t matter. The team still got off to a bad start. And Nwora wound up playing 30 minutes.

Samuell Williams, who started in Nwora’s place, wound up playing only five minutes. You ask, why not start a freshman? That’s Exhibit A. Williamson, though he started, wound up playing the fewest minutes he’s played in several weeks.

I know enough about college players to know this – you never know what’s going on with them. Nwora’s lack of focus at Georgia Tech was evident. He wasn’t in a defensive stance. He allowed people to go by him and completely missed on a back-door cut that led to a layup in the opening minutes.

Nwora is a really good kid who has had some tough games, and who no doubt will turn it back on at some point.

He, like, many on the team I suspect, is dealing with issues that are as much mental as basketball related. In fact, that leads to my nex thought on this team.

Here’s why I say this. It’s a team that seems to have trouble with success. And why wouldn’t it? These guys, people often forget, have been through a lot. They committed to a program with a Hall of Fame coach and a championship history, but they haven’t experienced that history. They’ve experienced turmoil and change.

When they gave up a 20-point lead in the final 10 minutes against Duke, it struck me that the block may have been as much mental as physical, talented as Duke was. And having just beaten Virginia, in what looked like control of their ACC fate, the team once again flinched.

The terrible free-throw shooting performance at Kentucky, worse than any we've seen from this team, really, in two seasons. Again, flinching in the face of success.

Some of you are reading this and saying to yourselves, “BS. It’s psycho-babble. Just toughen up.” That’s one way to fix it. But that way has not worked to this point.

I just have a gut feeling that this group needs to believe it deserves the success it has had, and more, if it will keep working to earn it.

Sometimes it’s tough to break through that barrier if you don’t have guys on the team who have experienced it. But that’s what Louisville will have to do.

8). SCHEDULE NOTE. I’ve mentioned, maybe too much in the minds of some fans, that most of Louisville’s 10-game winning streak came against non-NCAA Tournament competition. That can mask problems, or let you get away with bad habits, like starting games slow.

Without question, some of the struggles of the past two games are continuing issues that only now are biting the Cardinals.

Having said that, these two games could create the crisis point that gets this team on to better things. It’s unlikely, given what we saw last week, that it would’ve broken through to a deep tournament run without some kind of event that pushed it to another level.

It now has had such an event. We’ll see what happens next.