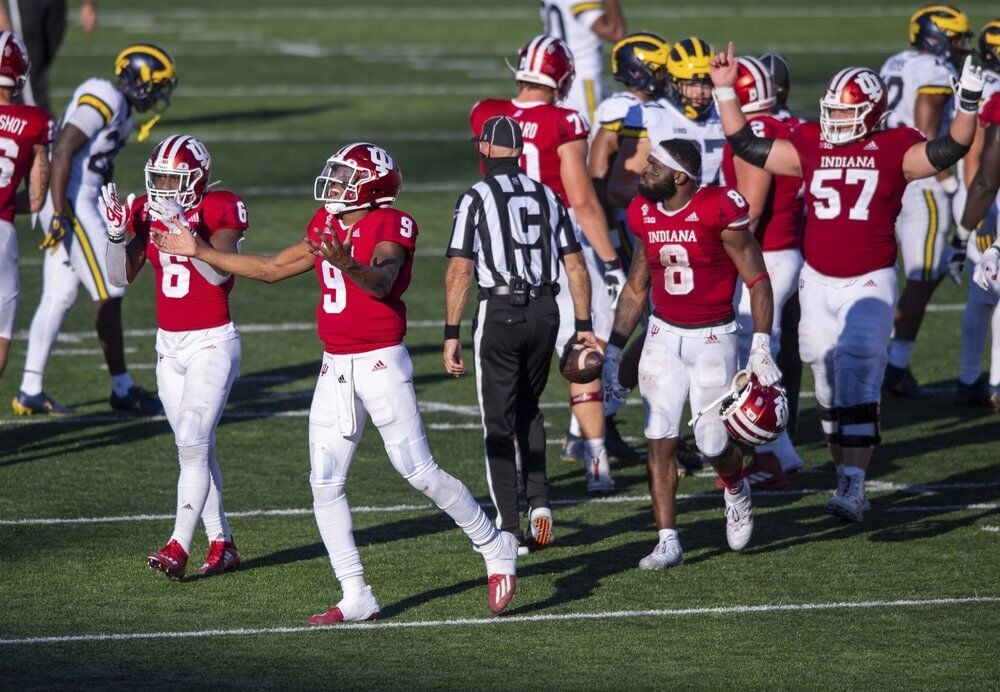 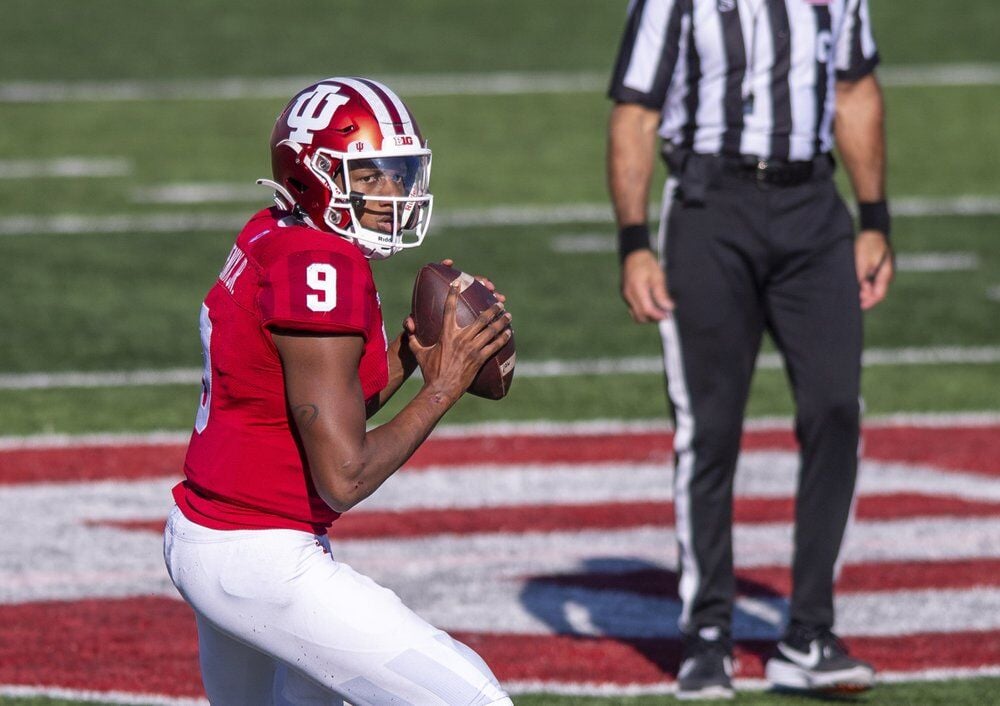 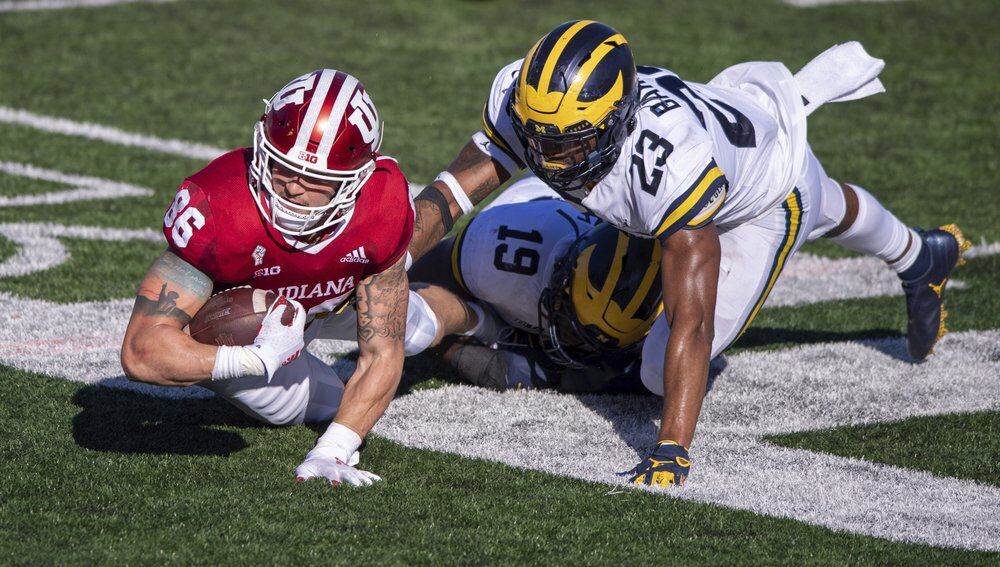 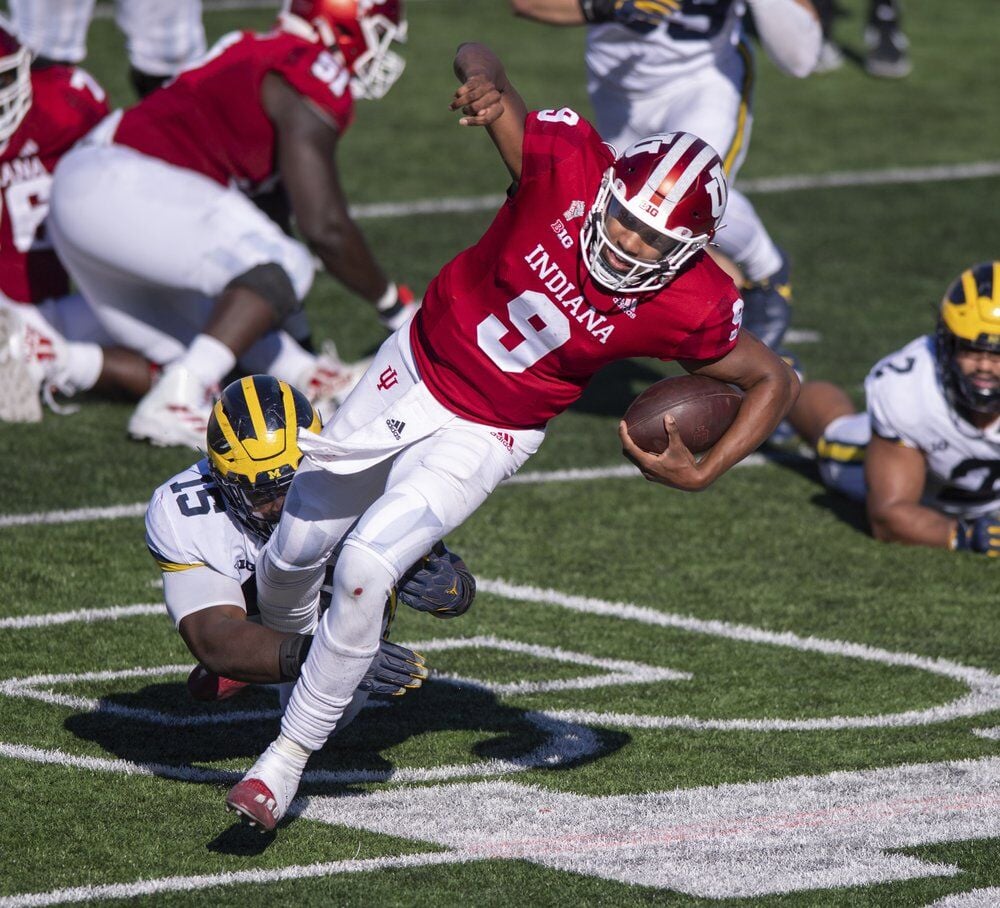 Indiana quarterback Michael Penix Jr. (9) is tripped up by Michigan defensive lineman Christopher Hinton (15) as he runs the ball out of the backfield during the second half of an NCAA college football game Saturday, Nov. 7, 2020, in Bloomington, Ind. Indiana won 38-21. (AP Photo/Doug McSchooler)

Indiana quarterback Michael Penix Jr. (9) is tripped up by Michigan defensive lineman Christopher Hinton (15) as he runs the ball out of the backfield during the second half of an NCAA college football game Saturday, Nov. 7, 2020, in Bloomington, Ind. Indiana won 38-21. (AP Photo/Doug McSchooler)

LOUISVILLE, Ky. (WDRB) -- It has been 18,765 days since the Indiana football team cracked the top 10 of the Associated Press college football poll.

IU will try to keep its undefeated season alive when it visits Lansing, Michigan, to face Michigan State at noon Saturday, Nov. 14. The Spartans (1-2) lost 49-7 to Iowa on Nov. 7 after pulling off a 27-24 victory over the Wolverines in Week 2 of the Big Ten season.

Meanwhile, Alabama rose to No. 1 for the first time this year, extending its record of consecutive seasons with at least one week on top of the rankings to 13.

Notre Dame moved up two spots to No. 2 on Sunday after upsetting Clemson in a dramatic double-overtime game Saturday night. Ohio State remained No. 3. Clemson gave up the top spot for the first time this season and landed at No. 4.

Texas A&M moved up two spots to No. 5, the Aggies’ best ranking since they finished fifth to end the 2012 season.

Florida jumped two spots to No. 6 after beating Georgia to snap a three-game losing streak against its SEC East rival. The Bulldogs fell eight spots to a season-low 13th.

It’s no surprise when Alabama reaches No. 1, but it’s always historic.

The Crimson Tide’s streak of seasons with at least one appearance at No. 1 started in Nick Saban’s second year as coach in Tuscaloosa. The Tide reached the top of the poll for the first time under Saban on Nov. 2, 2008, the day after beating Arkansas State.

No. 1 Texas lost that week at Texas Tech — Graham Harrell to Michael Crabtree in the final seconds as the Red Raiders shocked the Longhorns — to open the door for Alabama to ascend.

The second-longest streak of consecutive years appearing at No. 1 in AP poll history belongs to Miami, which went seven seasons from 1986-92.

This No. 1 appearance is the 92nd under Saban and Alabama’s record 123rd overall. Take away Alabama’s other No. 1 appearances and just Saban’s appearances at No. 1 would rank as the fourth-most in college history behind Ohio State’s (105), Oklahoma’s (101) and Notre Dame’s (98). That’s also one more than Southern California (91) has ever had.

— No. 23 Northwestern is ranked for the first time since the Wildcats finished the 2018 season at No. 21.

— No. 25 Louisiana-Lafayette returns to the rankings after cracking them earlier this season for the first time in almost 80 years.

— Boise State dropped out after getting run over by BYU on Friday night.

— Michigan is out for the first time this season after falling to 1-2. The Wolverines were last unranked while eligible for the poll at the end of 2017. Earlier this season, Big Ten teams were ineligible for the AP Top 25 because the conference was not planning to play a fall schedule.

After four Top-25 matchups this past weekend, there is none next week.

Blame LSU. The defending national champions have stumbled to 2-3, meaning for the first time since 2001, the Tigers will face Alabama as an unranked team.