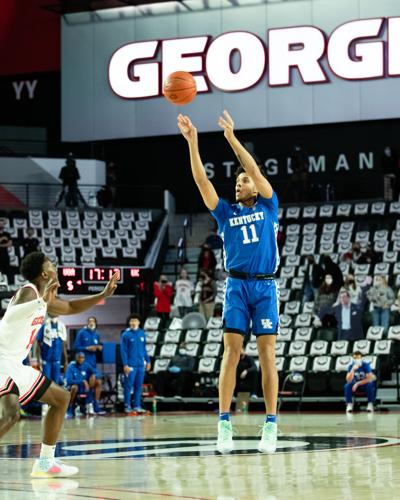 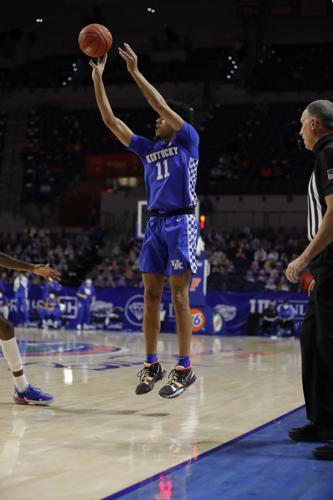 LOUISVILLE, Ky. (WDRB) — A friend asked The Question of the Year about college basketball earlier this week:

Can you name one player who would surprise you if he put his name in the transfer portal?

The correct answer, of course, is No.

Not if you’re being honest.

Free agency abounds in college basketball — and on Thursday it arrived at the University of Kentucky.

Dontaie Allen announced his plan to explore options beyond the University of Kentucky. Allen has yet to take advantage of the transfer option, which means he will be eligible to play immediately at his next school.

The news should not be surprising. Allen played only 8.8% of the possible minutes for John Calipari with the Wildcats this season. He earned 1 minute in UK’s last six games and only played more than 10 minutes in one game after Nov. 29.

Allen averaged 2.2 points in 19 games this season and 3.9 points over the last two. With an extra year provided by the NCAA because of the COVID-pause in 2020, Allen has three seasons of eligibility remaining.

He scored 3,255 points at Pendleton County High School before committing to UK as one of Calipari’s rare in-state recruits. With his ability to shoot from distance, Allen should have dozen of schools in pursuit.

Indiana and Hoosier nation thank you for a memorable year. It has been a crazy experience and I have made relationships that will last a lifetime. Love ❤️ 🤍

Allen’s decision follows the word on Wednesday that Indiana point guard Khristian Lander, a former 5-star recruit, had placed his name in the portal. And on Tuesday, Dylan Penn, Bellarmine’s top scorer, shared his decision to explore his options.

And on Thursday afternoon, Indiana backup center Michael Durr said that he had placed his name in the portal. If he leaves, Durr would depart after one season with the Hoosiers. He came to IU after playing three seasons for South Florida.

Every stop was a blessing, I’m forever grateful. 🙏🏼 #LL45 pic.twitter.com/tLcVhN8REF

On Thursday night, Parker Stewart became the third IU player to announce he will not return to Mike Woodson's team. Stewart started 31 games for IU this season and led the team in three-point shooting.

A two-time transfer, Stewart has already earned his bachelor's and master's degrees. He could transfer to another school or pursue a professional career.

Is there one player out there who would not surprise you by trying the portal?

LMPD: Man injured after being shot inside home in St. Denis neighborhood