LOUISVILLE, Ky. (WDRB) – Chris Mack, who was hired to help restore and rebuild the University of Louisville basketball program after Rick Pitino was dismissed for the program's role in a national scandal in 2017, is leaving the program before the end of his fourth season after a negotiated settlement with the school, he told reporters on Wednesday afternoon after informing his players inside the team practice facility.

The swift move was approved during a joint meeting between Louisville's athletics association board and its board of trustees on Wednesday afternoon. A university source had confirmed that the purpose of the meeting was to discuss the basketball coach.

After an hour-and-a-half closed-door meeting, officials announced that the university and Mack had reached a nearly $5 million settlement, a mutual agreement between the now former coach, UofL's Board of Directors and Athletic Association.

As part of the $4.8 million settlement, the university will pay Mack $133,333.33 at the end of each month through January of 2025. It also will pay for COBRA medical insurance benefits for Mack and his family through June of next year.

"The university has been great to me and my family," Mack said on Wednesday. "It was hard telling my girls. But life's too short to like, you know, live bitter. I'm just really appreciative."

Mack, who was scheduled to appear on his weekly radio show Tuesday night, cancelled the appearance. He said he had hoped to be the one to break the news to his players, but they already were aware of the news of his departure. He declined to talk about his discussion with them or their reaction.

Chris Mack is out as Head Coach at the University of Louisville. We just spoke to him outside the athletic facility. Here are his comments. pic.twitter.com/XbPX7W0FiM

He also declined to talk about the timetable of his departure, or details of the agreement he has come to with the university.

"I think it's just it's been building, you know," Mack said. "Obviously we all want the best for Louisville, you know, and I still do. And that's not going to change. It's not really important when any of that stuff. What's important is that these guys (players) need to be able to be connected. And I'm humble enough that if I'm not the right person, all good. I just want the best for them. They're great kids. I loved my time at Louisville. My kids love it here. And so I harbor no bitterness. Life's too short. I know in 2022 everybody wants to be a victim. I'll never live my life that way, at all."

Mack acknowledged that the plan is for his top assistant, Mike Pegues, to assume coaching duties, pending board approval.

"Mike's awesome," Mack said. "Assuming that, board approval and everything happens, I love Mike, I coached with him for 10 years and he is a special person. He'll connect. And he deserves an opportunity like this. I think he'll do a tremendous job."

Keith Oddo, a former Louisville player under Mack, Tweeted Tuesday night that, "Today stings and I have mixed emotions but Card Nation, keep supporting this team until the end -- be loud and pack the Yum, they deserve it."

David Padgett, who took over immediately after Pitino's departure and coached the team to a 22-14 record, also urged fans to support the players during this period.

"Regardless of what has happened to this point, these players need the full support of the entire fan base," Padgett said in a social media post. "They will never get this season back and deserve every chance to finish it out the right way. This program was built by Hall of Fame players and coaches, who understood what putting on that jersey is all about, and that will never change, regardless of whatever the future brings. That is what makes Louisville one of the most special destinations in college basketball."

The Cardinals have struggled over the past month, with five losses in their past six games, four of those losses by double-digits, the first time a Louisville team has suffered four double-digit losses in a 5-game span since 1940.

Mike Pegues, Mack's top assistant, who led the team to a 5-1 record while the head coach was suspended for 6 games to open the season, is expected to coach the team for the rest of the season. His first game will be difficult -- the Cardinals face No. 9 ranked Duke at noon Saturday in the KFC Yum! Center.

Mack leaves with a record of 11-9 this season, and an overall mark of 63-36 at the school, including a record of 7-15 against teams ranked in the AP Top 25. He led Louisville to the NCAA Tournament in his first season, where it suffered a first-round loss to Minnesota. The Cardinals were set for a high seed in his second year when COVID scuttled the tournament, and did not make the field after a COVID-plagued 2020-21 season.

Still, Mack guided Louisville to a 24-7 record and a 15-5 ACC mark in his second season, which tied U of L for second in the regular-season standings before COVID scuttled the postseason. It was the best overall record through 31 games for a Louisville team in six years and marked the most conference victories for the Cardinals in their six years in the ACC. The Cards achieved a Top 15 ranking throughout the season, including two weeks as the nation’s top-ranked team in the AP and USA Today polls.

A year later, the Cardinals finished just 13-7 and 8-5 in the ACC, but two long COVID pauses likely kept the Cards out of the NCAA Tournament.

Mack decided not to renew the contracts of longtime assistants Dino Gaudio and Luke Murray after that season. Gaudio, who had been a friend of Mack's and a mentor for 30 years, reacted angrily and demanded a severance package, or some other form of payoff, or, he threatened, he would turn over allegations of NCAA wrongdoing.

Mack secretly recorded the heated conversations and turned them over to authorities. The result was Gaudio pleading guilty to an extortion charge in federal court, and U of L self-reporting possible violations to the NCAA, including improper use of graduate assistants in practice and the production of impermissible recruiting videos.

On the day Gaudio was sentenced in Federal court, then-Louisville athletics director Vince Tyra announced that Mack would be suspended without pay for the first since games of the 2021-22 season.

Last October, the NCAA amended its Notice of Allegations in the pay-for-play scandal to include Level 2 allegations against Mack stemming from Gaudio's accusations.

Mack has three-years remaining on a 7-year contract that pays him $4.25 million annually, making him the 10th highest paid coach in college basketball. But that contract also allows the university to fire him for cause if the NCAA finds him guilty of a Level 2 violation. With a pair of Level 2 allegations hanging over him, speculation had ramped up in recent weeks over the possibility of a settlement between Mack and the university.

The Cardinals' fan base has been increasingly dissatisfied with his work, and after an 82-70 loss to Notre Dame in the KFC Yum! Center last Saturday, the team left its home court to a chorus of boos.

Mack arrived as coach on March 28, 2018, promising a hard-nosed brand of basketball and reaching out to big names from Louisville's past to start trying to heal the fractured program. He was just the Cardinals fourth coach in 49 years, and appeared with Hall of Fame coach Denny Crum at the podium when accepting the job, and invited former players to practice and events in his home on multiple occasions.

His coaching story was an intriguing one, beginning with coaching a grade school girls' team and winding its way to the upper reaches of college basketball.

He had arrived at Louisville after nine successful seasons at Xavier, where he won the Henry Iba Award as the U.S. Basketball Writers Association National Coach of the Year while also earning the CBS Sports and Basketball Times magazine National Coach of the Year awards that season. He led Xavier to a 28-6 record in 2015-16 and achieved a No. 2 seed in the NCAA Tournament and a No. 5 ranking in the final AP poll, which at the time was the school’s highest seed and ranking in school history.

You can read Mack's separation agreement with the university in full below: 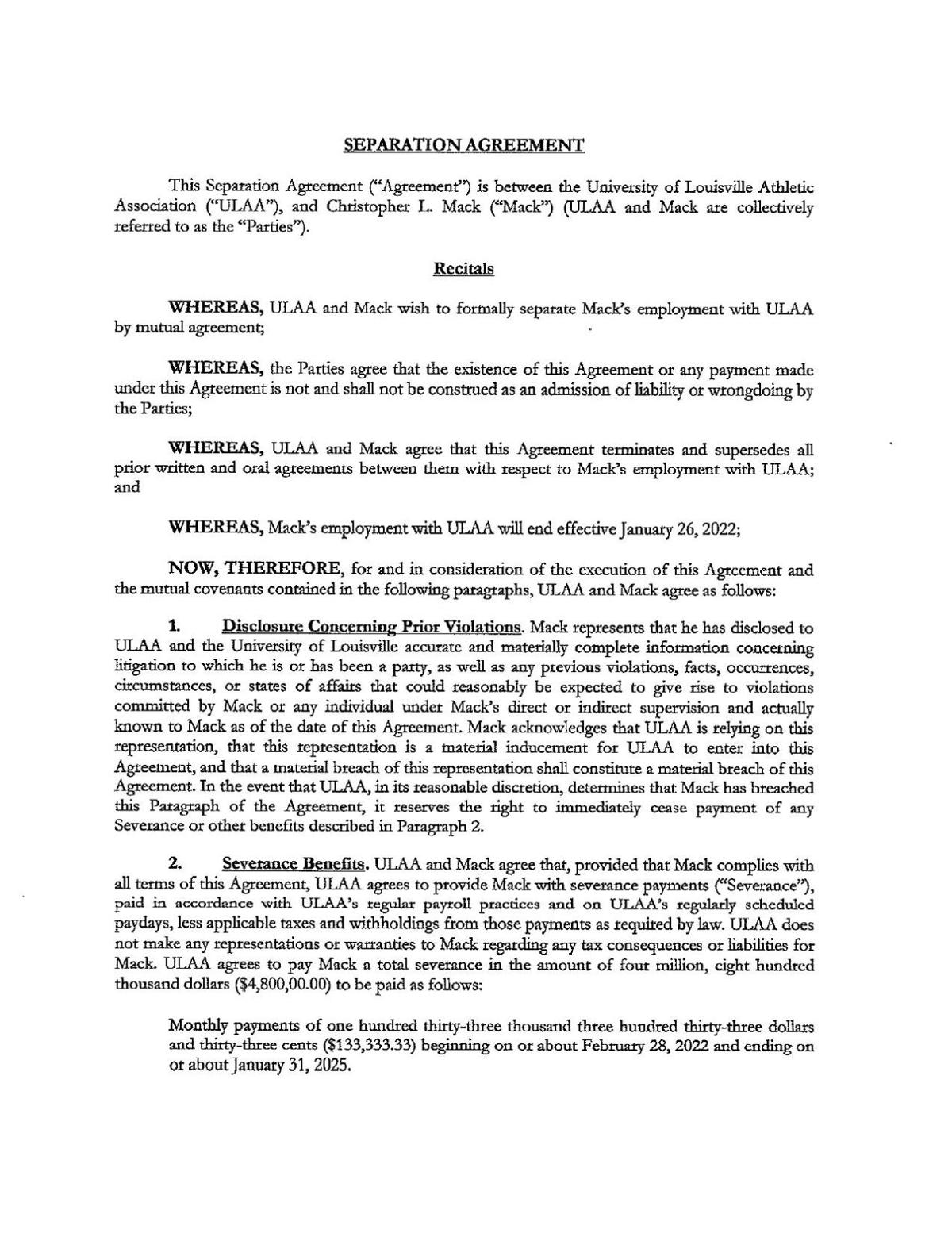