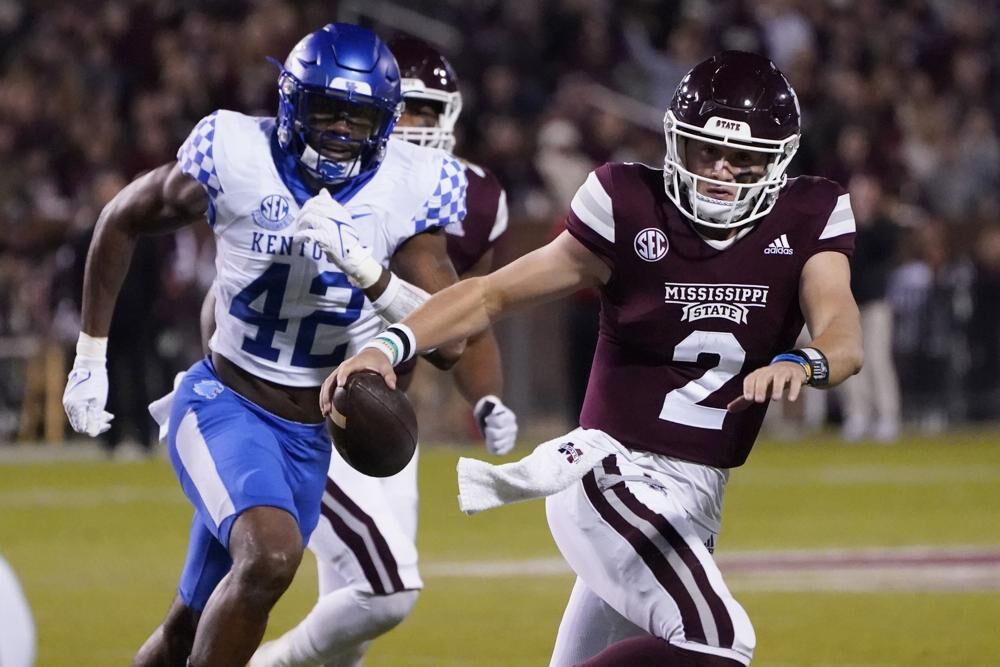 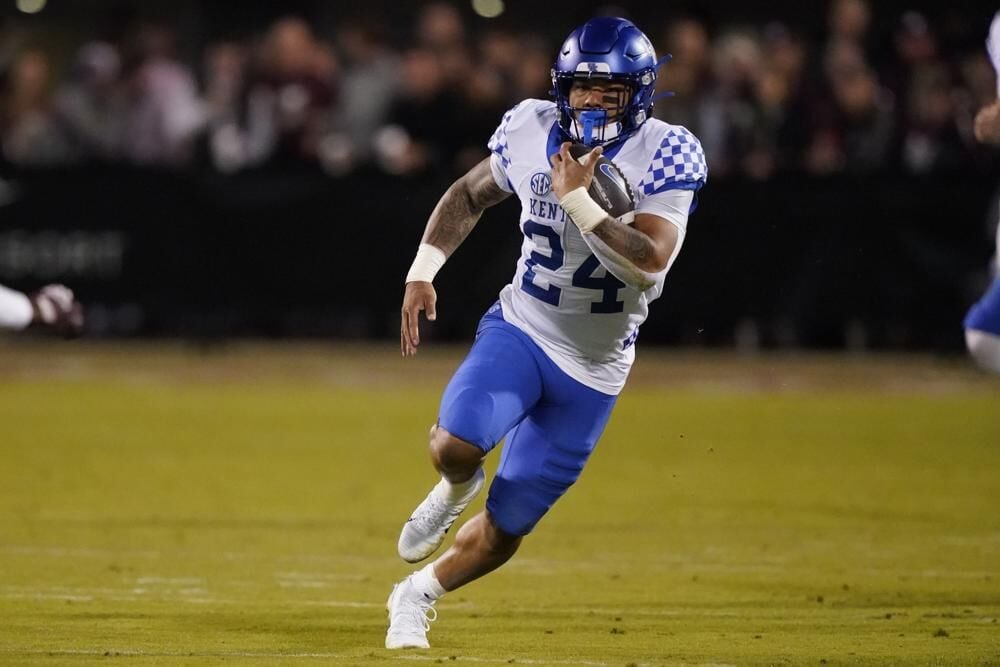 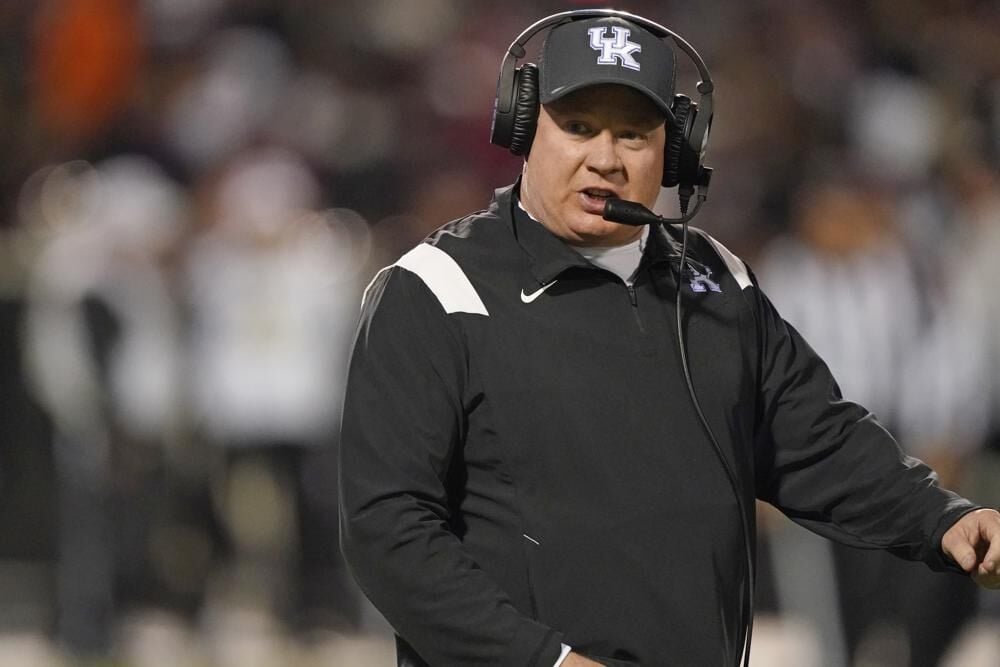 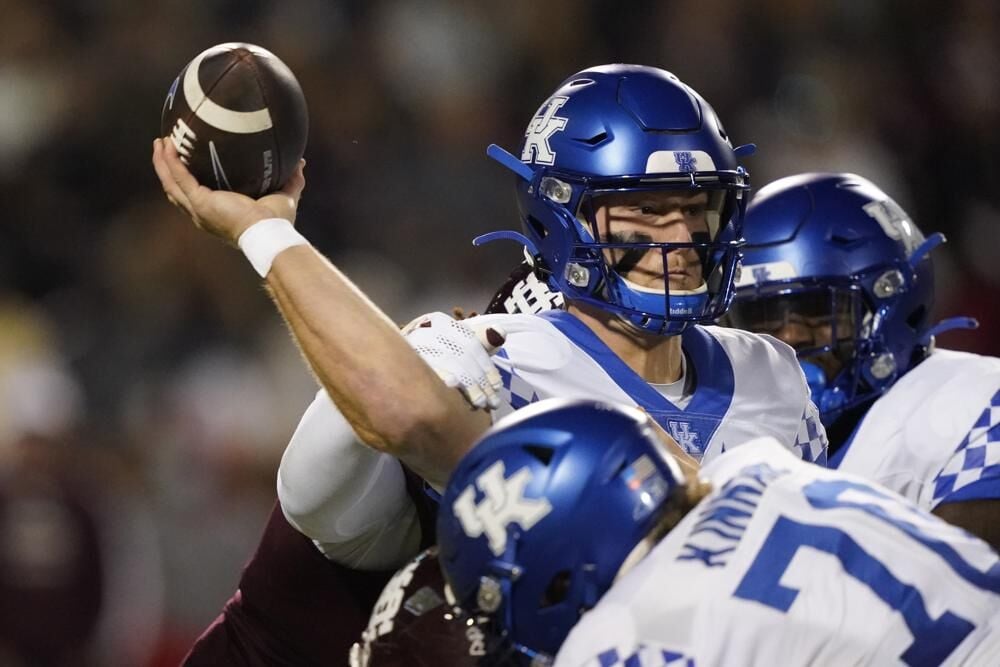 Kentucky quarterback Will Levis (7) passes while in traffic against Mississippi State during the first half of an NCAA college football game in Starkville, Miss., Saturday, Oct. 29, 2021. (AP Photo/Rogelio V. Solis)

Kentucky quarterback Will Levis (7) passes while in traffic against Mississippi State during the first half of an NCAA college football game in Starkville, Miss., Saturday, Oct. 29, 2021. (AP Photo/Rogelio V. Solis)

LOUISVILLE, Ky. (WDRB) — The one statistic that made you wonder if the Kentucky football team could continue chewing through the Southeastern Conference was turnovers.

Mostly fumbles, a dozen in the first seven games. But there were costly interceptions, too. Before Saturday, the Wildcats ranked last in the SEC in turnover margin, losing the football 8 more times than they took it from the opposing team.

The bill came due Saturday night.

The Wildcats turned the ball over four times — three interceptions by quarterback Will Levis and a fumble by halfback Chris Rodriguez — in a 31-17 loss to Mississippi State in Starkville, Miss.

"It's very difficult to have an opening statement because it's been awhile since we've had a game like that," UK coach Mark Stoops said. "We got outplayed in every way ... when you turn the ball over like that, you've got no shot against an offense like that."

Kentucky slipped to 6-2 overall, 4-2 in the SEC. With UK ranked No. 12 in the Associated Press poll, the loss was costly to the Wildcats because the first College Football Playoff rankings of the season will be released Tuesday night. It also hurt UK's chances to make a New Year's six bowl game.

"We were lucky enough to get them off balance," Mississippi State coach Mike Leach said.

Bulldogs’ quarterback Will Rogers completed 15 consecutive passes in one stretch. The top-ranked passer in the SEC, Rogers had the best game of his career, finishing 36 for 39 for 344 yards. His completion percentage of 92 percent was an SEC record for a quarterback who threw at least 30 passes in a game.

"Defensively it didn't seem like we made one competitive play, at least down the field," Stoops said. "They were more physical than us. We didn't have a lot of answers ... it's not a good feeling. I don't want to have a football team like this."

"We protected pretty good and I thought the receivers bounced around pretty well," Leach said.

For Kentucky, Levis completed 17 of 28 for 150 yards with a touchdown and three picks. Nine of the receptions were by Wan'Dale Robinson.

Kentucky’s primary offense in the first half was a 74-yard punt return for a touchdown by Josh Ali. Matt Ruffolo drilled a 41-yard field goal about three minutes into the second quarter to push the Wildcats ahead 10-0.

But Mississippi State scored two touchdowns to finish the half. With the Wildcats rushing only three linemen, Leach ran the ball more than usual. It worked. State entered the game as the SEC's worst rushing offense at 49 yards per game. The Bulldogs out-rushed Kentucky 94 to 66. It was the second consecutive game UK failed to rush for 70 yards.

But State also mixed its usual assortment of short passes to drive 75 yards for both scores — the first a 7-yard run by Jo’quavious Marks, the second a 9-yard run by Dillon Johnson.

Kentucky was in position to take the lead at halftime but with nine seconds to play Jalen Green intercepted a tipped pass at the goal line.

"You have to give it to Mississippi State," UK linebacker Jacquez Jones said. "They came out and were more physical than us and we didn't respond."

"We very deflating defeat," Stoops said. "They kicked our butts."

The Wildcats return to Kroger Field next Saturday to host Tennessee. The Volunteers (4-4) were off Saturday — and will visit Lexington carrying a two-game losing streak. The Vols allowed 83 points while losing to Ole Miss and Alabama.

"At the end of the day, the world's not falling," Robinson said. "We still have a chance to do some things that haven't been done around here in a long time."