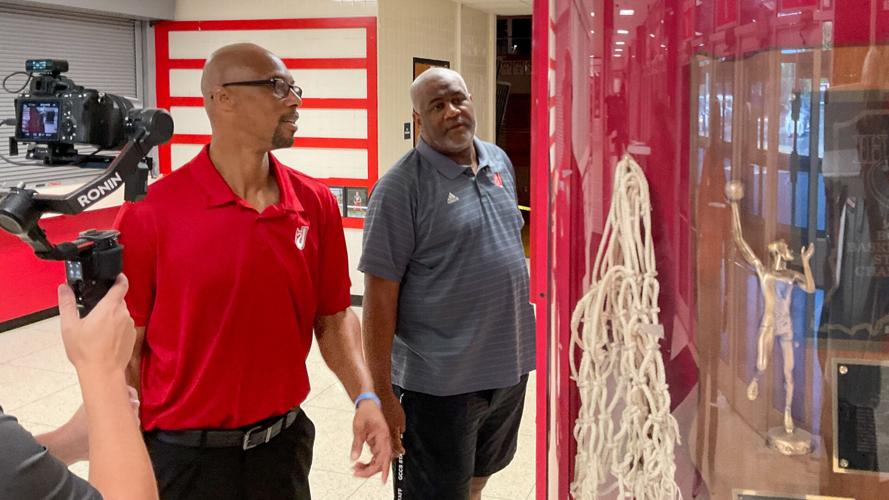 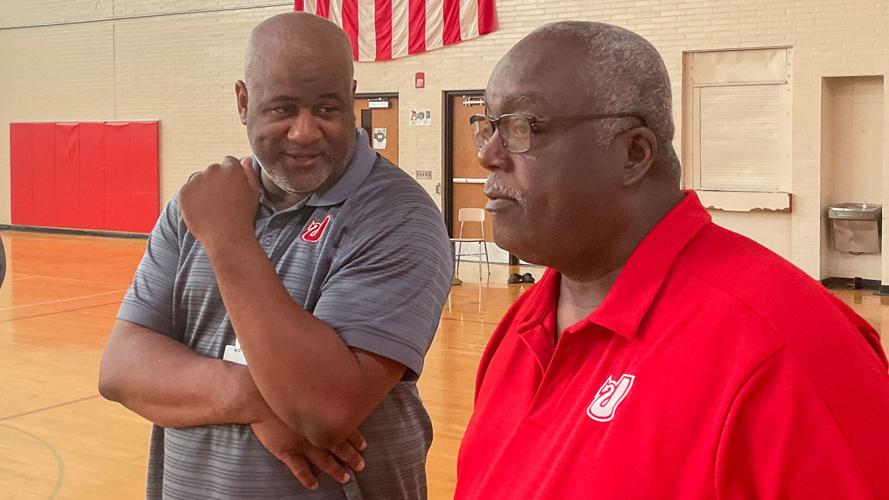 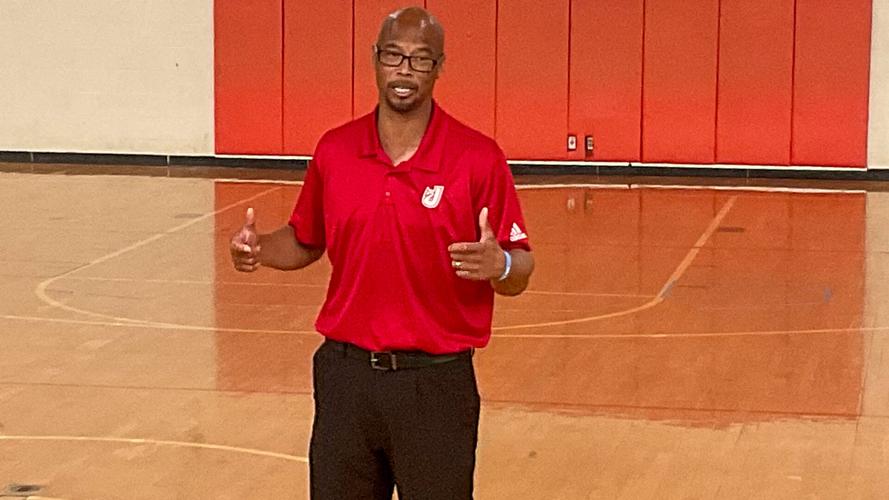 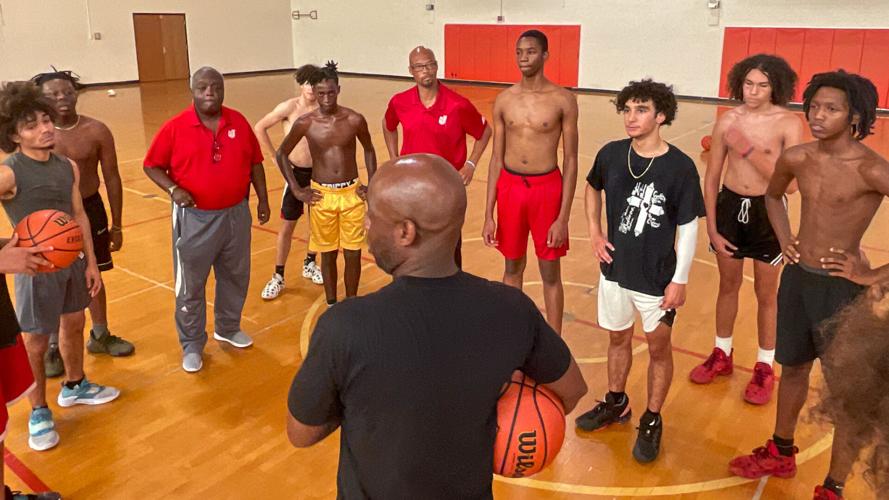 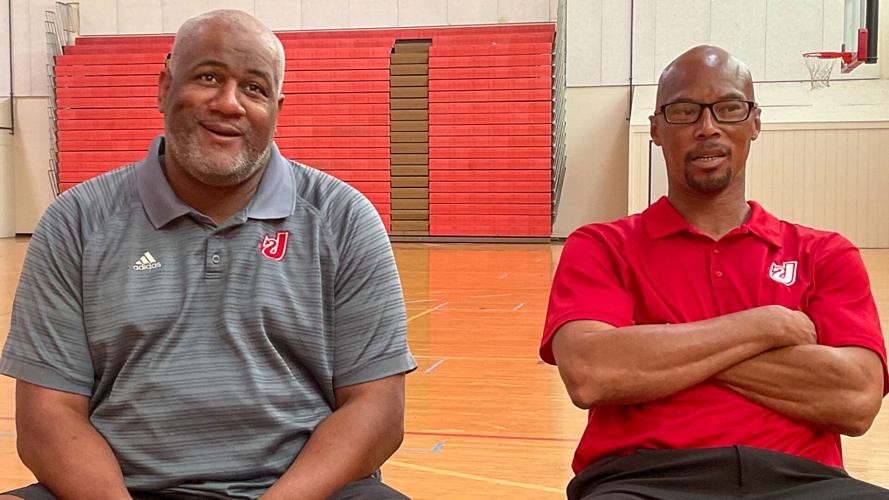 Cory Norman (left) and Sherron Wilkerson have been friends for more than 30 years. 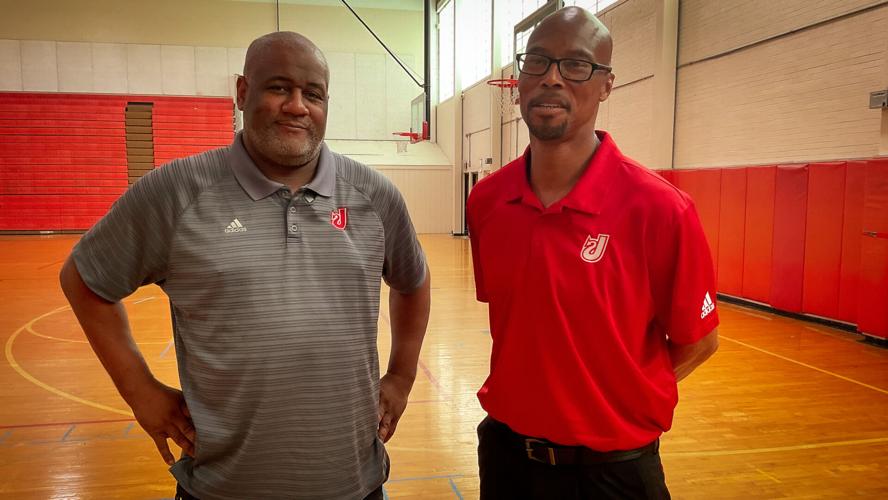 JEFFERSONVILLE, Ind. (WDRB) — In Indiana, nothing inspires love inside a community like winning a state high school basketball championship.

They hang celebratory signs on the roads that lead into town. The team picture goes up — and stays up — next to the arena scoreboard. The recognition comes without an expiration date.

Sherron Wilkerson and Cory Norman starred for the 1993 Jeffersonville team, the one that toured the town on fire trucks with the Red Devils’ only boys’ state title. Now they’re back to chase more titles — Wilkerson coaching the Jeff boys’ varsity, Norman leading the girls.

“I get calls all the time or I run into people,” said Clark Miles, a long-time Jeff fan and assistant coach. “And the first thing they say is, ‘Man, you’ve got Sherron and Cory back! What do you think is going to happen?’

“I think we’re going to be all right.”

In high school, Wilkerson and Norman were more than all right. They were legendary. That 1993 title was a championship Jeff fans love to re-live by gazing into the trophy case at Johnson Arena. Press a button and listen to the replay of the final 39 seconds of Charlie Jenkins’ radio call. Visitors do it all the time. The players do, too.

“When I come into this gym, there’s definitely a quiet voice of where you are,” Norman said.

They were teenagers and everything was possible in their young lives. They remember the police escorts. They remember erasing the stinging memory of blowing a 6-point lead in the final minute of the 1992 state semifinals.

They certainly remember lifelong Jeff fans crying while confessing to the players that “now we can die happy,” during a community celebration that lasted for weeks.

“That resonated at the time,” Wilkerson said. “But now as a father, husband, professional coach, it resonates way more. It’s a very powerful, very powerful thing.”

The teammates have returned with a greater and more inspired calling than they had three decades ago.

In May, Wilkerson was named the boys’ varsity coach. Three weeks later Norman agreed to coach the Jeffersonville girls.

“Who would have thought in 1993 that we would be sitting here 29 years later?” Norman asked. “As far as us being here the same time? I just think it’s divine intervention.”

“It’s a prayer answered,” Wilkerson said. “A blessing, if you will … we’ll make sure we represent the community in a way that everybody will be proud. We want the grandmothers to be proud, right?”

“When you’re a 17 or 18 year old kid, you don’t realize the impact it has on people who have supported the program for eons,” Norman said.

“You are representing part of a club that is exclusive. You want to make sure that your represent that club in the way it is supposed to be represented.”

At Jeff, the basketball tradition began in 1906. With the boys’ program, it features nearly 1,700 wins, including 39 sectional titles, which ranks 25th among the more than 400 Indiana high schools that compete every March in Hoosier Hysteria.

Jeff has only one boys’ state title, the one delivered by Wilkerson, Norman, Brien Hanley, B.J. Flynn, Brad Bixler, Dana Overton and the rest of the Red Devils’ squad that coach Mike Broughton led to 29 wins in 31 games.

That was Jeff’s last appearance in the boys’ state title game. Last season the Red Devils’ finished a disappointing 8-11 winter with an ugly 77-38 loss to Floyd Central in the sectional final. A home arena that once crackled with energy was sometimes less than half full.

When Wilkerson and Norman excelled, you needed a season ticket for a good seat inside Johnson Arena. People lined up outside the building, hoping to get inside for games against rivals like New Albany or Floyd Central.

The Jeff girls, who won their only state title in 2011, split 18 games, losing to Bedford North Lawrence in the sectional. That program also needed an injection of enthusiasm and adrenaline.

Enter Wilkerson and Norman, friends for more than 30 years. Their basketball odyssey has taken them from River Valley Junior School to Jeff to around the country and globe.

Wilkerson famously played nearly three seasons for Bob Knight at Indiana University before finishing his college career as an NAIA all-American at Rio Grande College. His serendipitous coaching career began when somebody asked Wilkerson to organize a group of third graders in Madison, Indiana. That was after Wilkerson played professionally for about a decade in Sweden, Latvia, Montenegro, Germany, Turkey, Brazil and Israel.

Norman started his college career at Western Carolina University and finished it with coach Bruce Pearl at the University of Southern Indiana. He has coached high school basketball around the state, including a period as an assistant at Jeff, worked in business and served as an educator.

“The phrase would be a calling,” Norman said. “I finally figured out what I was wanting and needing to do.”

Last winter, Wilkerson was the boys’ varsity coach at Logansport High in north central Indiana, where he was assisted by Norman. The undermanned Berries struggled through a 3-19 season.

During the spring, Wilkerson said Jeff High principal Pam Hall called to inquire about his interest in the Jeff boys’ job. How long did Wilkerson wait to confirm his interest?

“As soon the words could come out of my mouth,” he said.

“I think we all have a bucket list. Coaching Jeffersonville was No. 2 on my bucket list. No. 1 was to become a Division I head basketball coach.”

Wilkerson was hired May 23. The girls’ job opened several weeks after the boys’ job. Norman had tried for head coaching jobs at Jeff previously — without success. He was not certain he wanted the disappointment of trying and not getting the position again. But parents of several girls’ players encouraged him to apply.

“It had been a bumpy road,” Norman said. “I decided to pray on it and try again.”

Now here they are, back where it all began. Wilkerson expects to rebuild with a talented collection of sophomores. They have been practicing three nights a week from 4 to 6 p.m. Miles, one of Jeff’s assistants when Wilkerson and Norman played, has agreed to help.

“(Wilkerson) is going to get us where we need to be because he’s been there before,” said Michael Cooper, a sophomore guard on the Jeff boys’ team.

“He knows a lot about the game because he’s played for so many good coaches,” said B.J. Douglas, another Jeff sophomore. “It’s easy to trust him because he’s been there before.

“Everybody in my family remembers him. He was very good here.”

Norman is several weeks behind in organizing his team because he was not named the girls coach until June 14. He is still commuting three hours each way from Logansport.

But Wilkerson and Norman both know what they want to do, beyond win more games:

Rebuild the powerful community pride in Jeffersonville High School basketball while sharing the life lessons they learned during the Red Devils’ glorious run. In their locker rooms, the latter has become more important than it has ever been.

“Everything about my life has made me who I am today,” Norman said. “I try to give back to the kids, some of the lessons I have learned along the way, so they don’t bump their heads.”

“The way our lives are set up, (teenagers) are tasked with making some of the most important decisions of their lives with the least bit of information,” Wilkerson said.

“It takes a village to feel like you care about them, more than just basketball players.”

Which is why Sherron Wilkerson and Cory Norman have come home again to Jeffersonville High School.