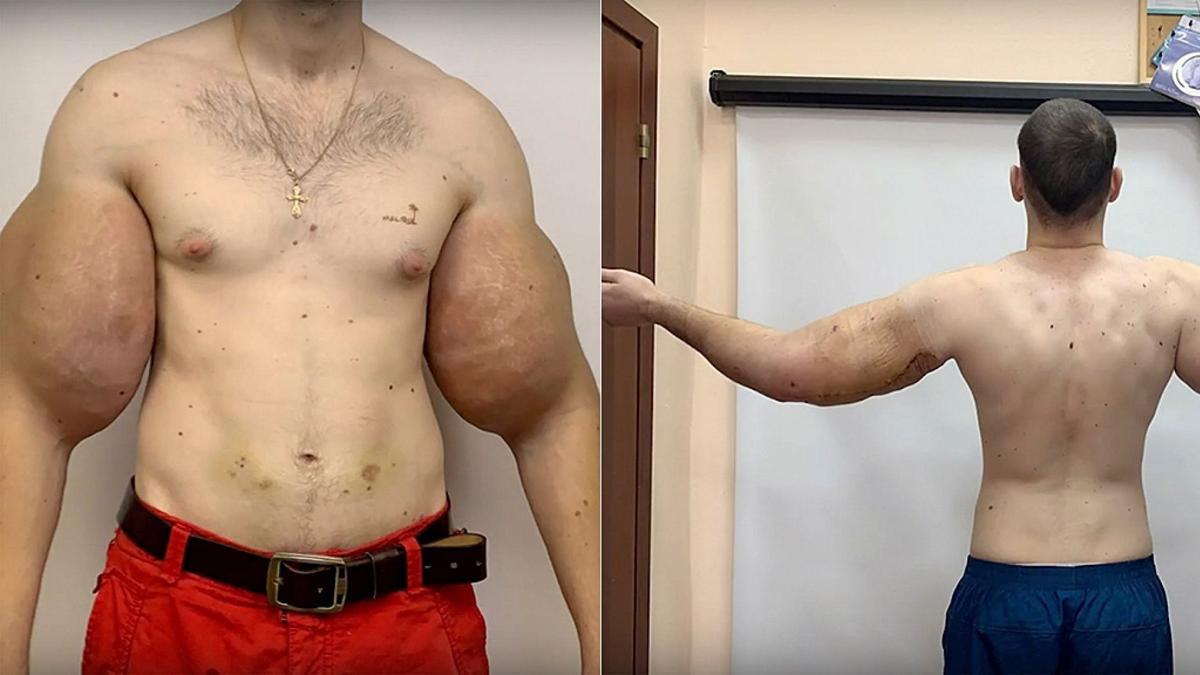 The 23-year-old has been nicknamed "Popeye" due to the size of his arms. (East2West via Fox News) 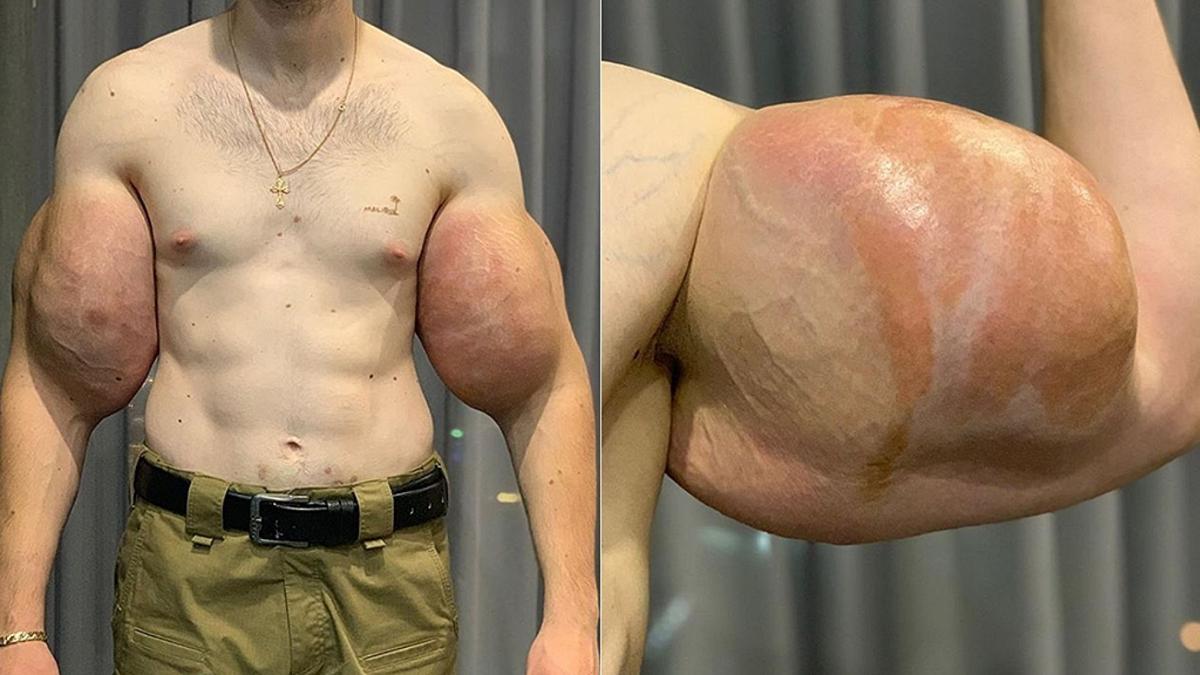 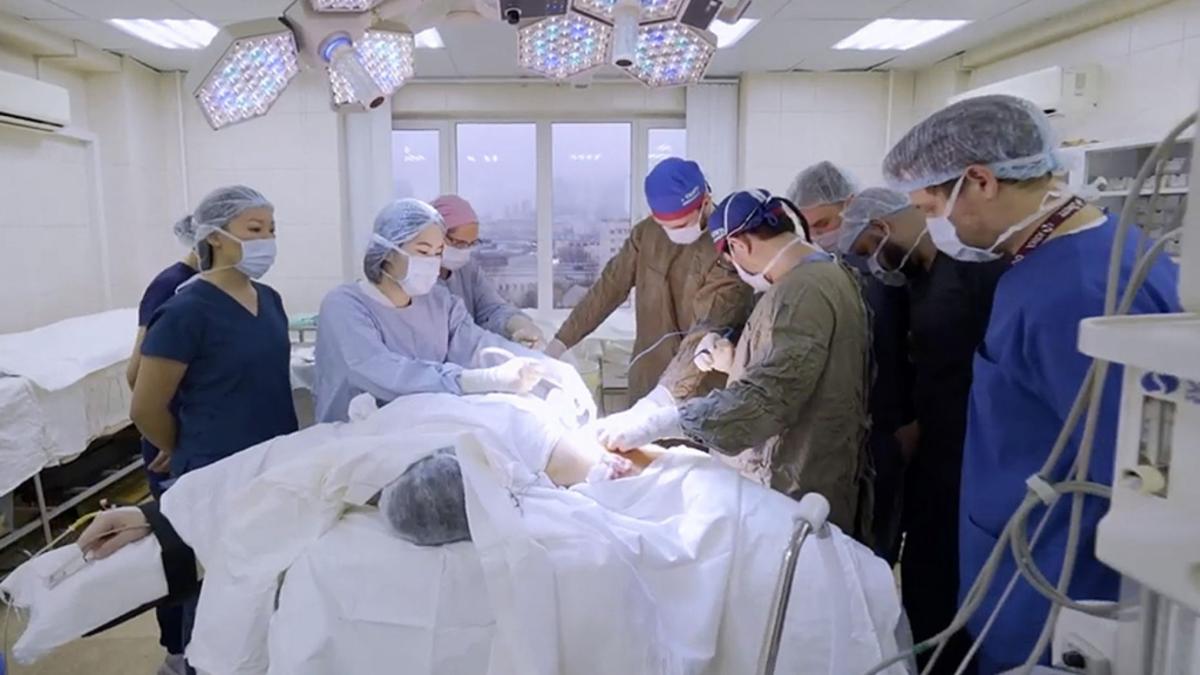 Kirill Tereshin during the first of possibly three surgeries to remove the implants. (East2West via Fox News)

The 23-year-old has been nicknamed "Popeye" due to the size of his arms. (East2West via Fox News)

Kirill Tereshin during the first of possibly three surgeries to remove the implants. (East2West via Fox News)

(FOX NEWS) -- A 23-year-old bodybuilder in Russia, who has been nicknamed "Popeye" due to his abnormally large biceps, has recently undergone the first of at least three surgeries to remove roughly 3 pounds of "dead" muscle tissue after he injected a dangerous enhancement substance — Synthol — into his biceps and triceps.

Kirill Tereshin used "petroleum jelly" injections, or Synthol oil, to enhance the size of his arms, which, before surgery, were said to be 24 inches around, Fox News reported based on an article in the New York Post.

Tereshin, who was reportedly told he could die or face amputation if he did not have the corrective procedure, was also encouraged to have the surgery by a Russian plastic surgery activist named Alana Mamaeva, according to the outlet. The 32-year-old reportedly helped to raise money for the surgery, which occurred at Sechenov Moscow State Medical University.

The surgery was performed by Dr. Dmitry Melnikov, who, according to the Post, estimated that Tereshin injected three liters — about 100 ounces — of the petroleum jelly-like enhancement substance into his arms. About 75 percent of what the doctor described as "scar tissue with fragments of muscles" was removed during the first of possibly three surgeries.

"It saturated the muscle tissues, blocked blood flow," Melnikov said, according to the Post. "As a result, the tissue dies and gets replaced with a scar which is as tough as a tree."

He added: "We have seen petroleum jelly injected into breasts, buttocks and other parts of the female body,” he said. “We are warning that it is extremely dangerous."

Synthol oil is purely cosmetic, causing the muscles to "balloon" and appear bigger than they really are. The substance is injected deeply into the muscle and typically consists of oil, benzyl alcohol, and lidocaine, according to a 2009 review on the usage of Synthol in bodybuilding.

The substance, which is most often used in the triceps, biceps, deltoids and calf muscles, has “some serious drawbacks,” per the review. Most obviously, the substance can cause muscles to become abnormally shaped, but “The side effects of Synthol are manifold and they can also cause damage of nerves, oil embolic of the pulmonary, occlusion of the pulmonary artery, myocardial infarction, cerebral stroke, and infectious complications,” according to the review.

Melnikov said his patient was "lucky" that the injections did not affect any other parts of his body.