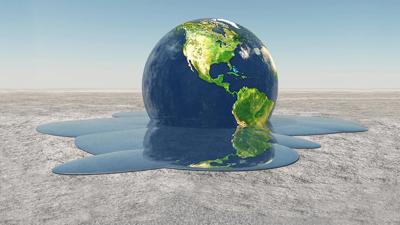 From warmer ocean temperatures to longer and more intense droughts and heat waves, climate change is affecting our entire planet. Scientists at NOAA have long worked to track, understand and predict how climate change is progressing and impacting ecosystems, communities and economies. Let's take a look at five ways scientists are studying this far-reaching global trend. THE KEELING CURVE
The carbon dioxide data on Mauna Loa constitute the longest record of direct measurements of carbon dioxide in the atmosphere. Credit: NOAA and Scripps Institution of Oceanography.

To understand climate change, scientists need an accurate, up-to-date record of how greenhouse gas levels in the atmosphere have changed over time. Enter: NOAA Global Monitoring Laboratories’ Global Greenhouse Gas Reference Network, which measures the three main long-term drivers of climate change: carbon dioxide (CO2), methane, and nitrous oxide. Four remote atmospheric baseline observatories form the backbone of the monitoring system - the most well-known of which, located in Mauna Loa, Hawaii, is home to the longest record of direct measurements of CO2 in the atmosphere. This year, scientists used data from these observatories to confirm that average global CO2 levels had surged in 2020 to 412.5 parts per million - levels that are higher than at any time in the past 3.6 million years. The ocean can absorb and store a lot of heat. In fact, more than 90 percent of the planet’s warming over the past 50 years has occurred in the ocean, making the buoys, floats and other ocean monitoring tools NOAA uses to keep tabs on ocean warming critical. Argo, for instance, is a network of about 4,000 autonomous floats that drift throughout the ocean, gathering critical data on salt content and temperature. Last year, data collected by Argo floats helped scientists determine that the area of ocean regions with long-term warming trends dwarfs that of regions with cooling trends. Deep Argo floats have also found that the coldest waters off of Antarctica are warming three times faster than they were in the 1990s. Tracking ocean warming helps scientists better predict sea level rise, gauge threats to coral reef ecosystems and important fisheries, and build knowledge on how a warmer ocean impacts our weather - including severe weather like hurricanes.

3. Exploring the link between climate change and hurricanes

Hurricanes draw their strength from warm ocean waters. So as the ocean continues to absorb heat, should we expect to see more intense hurricanes, tropical storms and typhoons?

Probably, according to recent research led by NOAA scientists. The research, which analyzed findings from over 90 peer-reviewed studies, found that warming of the surface ocean from human-caused climate change is likely fueling more powerful tropical cyclones. And as sea levels rise, the destructive power of tropical cyclones is amplified, as higher sea levels can result in more intense flooding. ⁣NOAA scientists have also concluded that climate change has been influencing the pattern of where tropical cyclones have been increasing or decreasing in occurrence. Researchers are still working to understand the link between climate and hurricanes - check out this page for the most up-to-date science.

4. Tracking warming in the Great Lakes

Like the ocean, freshwater is also impacted by Earth’s warming temperatures. In the Great Lakes, scientists who monitor winter ice cover say that, though ice cover tends to be variable from year to year, the data show a long-term trend of ice decline over the last several decades. Research has also shown that the Great Lakes’ deep waters aren’t immune to warming: As climate change has gradually delayed the onset of autumn in the Great Lakes region, the deep waters of Lake Michigan have started showing shorter winter seasons. Increases in the lakes’ water temperatures can have serious impacts, including disruptions in the food web that could affect fisheries and recreation, which are important parts of the regional economy. From sunny day flooding creating hazards for coastal regions in Florida, to summer heat waves posing risks to communities without air conditioning in the Northeast, climate change creates a range of challenges and dangers for communities. NOAA is helping communities become more resilient to these changes. In Utqiaġvik, Alaska, for instance, NOAA Sea Grant and partners are working with the local community to better understand risks of flooding and shoreline erosion, helping them better prepare for storms. The NOAA Regional Integrated Sciences and Assessments (RISA) program also funds research and engagement to help Americans prepare for climate change. For instance, the Northeast RISA team worked with New York City officials to map out where in the city extreme heat was having the most impact, so that the city could take action to protect at-risk residents. The U.S. Climate Resilience Toolkit also makes it easy for people to learn more about climate-related risks and opportunities in their area, giving them the knowledge they need to make their communities more climate resilient.

To learn more NOAA’s work on climate change, visit climate.gov, and consider subscribing to the This Week on Climate.gov newsletter.