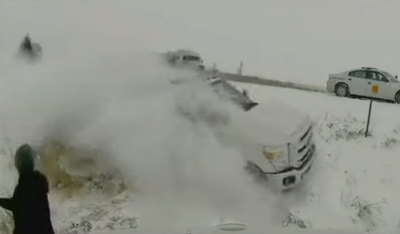 The dangers of snowy & icy roads were highlighted by this near-miss along an interstate in Iowa this week. The shocking and scary video was released by the Iowa State Patrol. It shows a pick up truck crashing into a delivery truck and nearly hitting two people on the side of the highway. A man and a state trooper were surveying the damage of a delivery truck in a ditch when a second truck lost control on the slick roads and barreled toward them and into the crash scene. Thankfully, there were no serious injuries.